This absence of money — the most mystical of all human creations — is enough reason to let people starve, writes Vijay Prashad.

Young children marvel at an obvious contradiction in capitalist societies: why do we have shops filled with food, and yet see hungry people on the streets? It is a question of enormous significance; but in time the question dissipates into the fog of moral ambivalence, as various explanations are used to obfuscate the clarity of the youthful mind.

The most bewildering explanation is that hungry people cannot eat because they have no money, and somehow this absence of money — the most mystical of all human creations — is enough reason to let people starve. Since there is ample food to eat, and since a lot of people do not have enough money to buy food, the food must be protected from the hungry people.

To that end, we — as human beings — allow for the creation of a police force and for the use of violence to defend food against the hungry. In one of his earliest journalistic reports, Karl Marx wrote of the violence used against the peasants of the Rhineland who collected fallen wood to feed their fires.

The peasants, Marx wrote, know the punishment — including death — but they simply do not know the crime. For what reason are they being beaten and killed? The collection of wood that has fallen on the forest floor cannot be seen as an act of criminality, nor can the basic human need for hungry people to forage for food. And yet, social wealth in a society in which the hierarchies of class are entrenched is sluiced off to build larger and larger repressive institutions, from the police to the military. 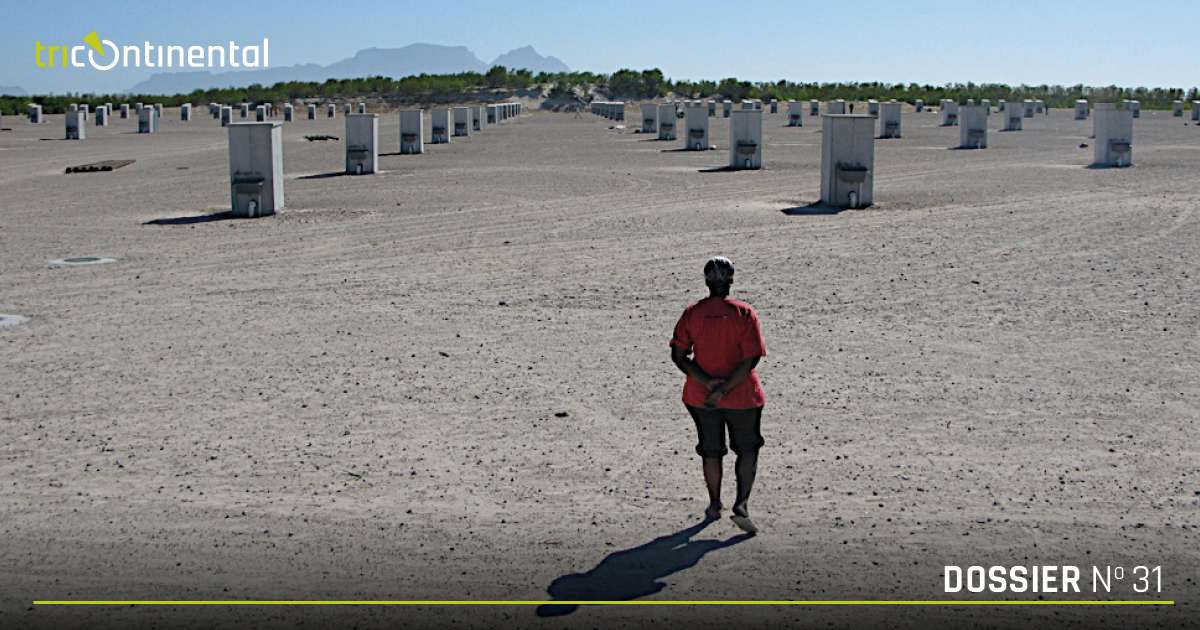 You would think that amid a pandemic, when employment has collapsed and hunger has risen, social wealth would be diverted from the police to erase starvation, but that is not how the society of entrenched class hierarchy works. In July, the Food and Agricultural Organization (FAO) and other UN agencies released a report – “The State of Food Security and Nutrition in the World” – which showed that the trend before 2014 was for a decline in world hunger; since then the numbers have climbed dramatically, and since the Great Lockdown they have climbed exponentially.

Half of the world’s hungry are in Asia, with the majority in India. About 3 billion people cannot afford a healthy diet. Storehouses of food are opened only briefly, relief distributed only fleetingly. Afflicted by the hunger pandemic, when people go onto the streets to demand food or to defend their rights, they face the cold steel of state repression.

In August 2020, our office in South Africa published dossier no. 31, “The Politic of Blood: Political Repression in South Africa,” a powerful text that demonstrates a painful fact: that the violent state institutions germinated by the apartheid era have been carried over since 1994 into the post-apartheid South African state. During the transition, “a struggle waged by millions for the construction of popular democratic power and participatory forms of democracy was reduced to elections, the courts, a free commercial press, and the substitution of NGOs, now described as ‘civil society,’ for democratic forms of popular organization.”

After apartheid, “independent forms of self-organisation and popular demands for more participatory forms of democracy were frequently treated as criminal.” The situation has deteriorated to such an extent, authors argue, that in South Africa, “the police kill people, the vast majority of them impoverished and black, at a per capita rate that is three times higher than that of the police in the United States.” The numbers are stunning, the range of violence shocking. 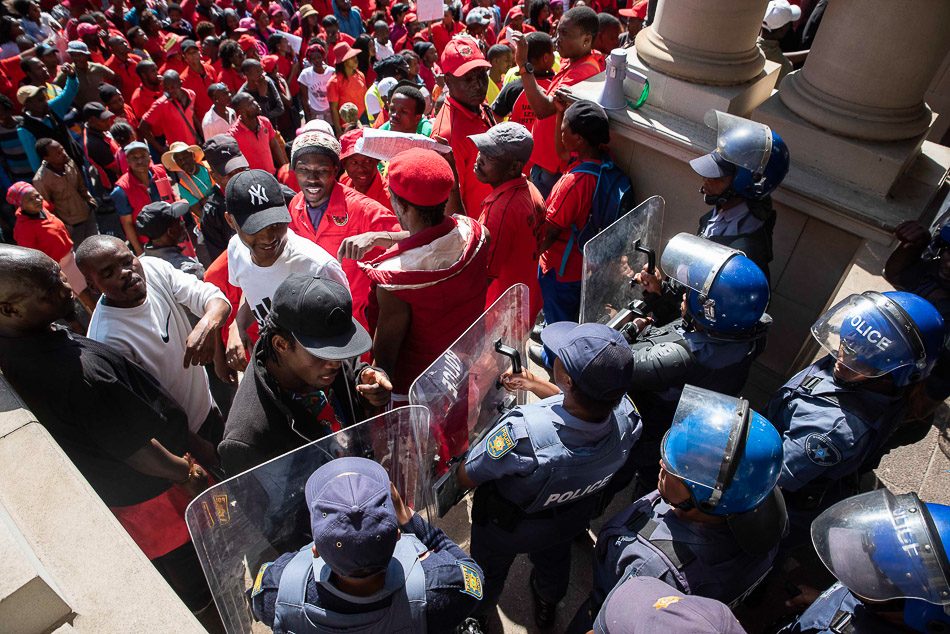 Police barricade the entrance to the City Hall during a march of thousands of members of Abahlali baseMjondolo protesting against political repression, Durban, Oct. 8, 2018. (Madelene Cronjé, New Frame, South Africa)

In South Africa, repression against popular organizations — trade unions and shack dwellers’ formations — has not lessened during the pandemic. Almost 300,000 people have been arrested in these months; public gatherings have been banned, which means that the people’s organizations have had a difficult time building resistance against the harshness of state violence. One of the test areas is Durban, where the shack dwellers’ movement — Abahlali baseMjondolo — has led land occupations, and where the local government has been harsh in its violence against the people in these new settlements.

On July 28, for instance, the African National Congress-led municipality attacked the eKhenana Occupation in Cato Manor, a historic, popularly initiated working-class neighborhood, which — in 1959 — had been where women such as Dorothy Nyembe and Florence Mhize forged the uprising against the apartheid state that began to win popular support for the African National Congress. All that is forgotten now, as state violence was used — despite court orders to protect the residents — to evict them from their homes, their urban farming project and their cooperative that afforded them food sovereignty.

The eKhenana Occupation flew the flag of Abahlali and, as part of their ethos of international solidarity, the flag of their comrades in the Movimento dos Trabalhadores Rurais Sem Terra (MST), the landless workers movement of Brazil. 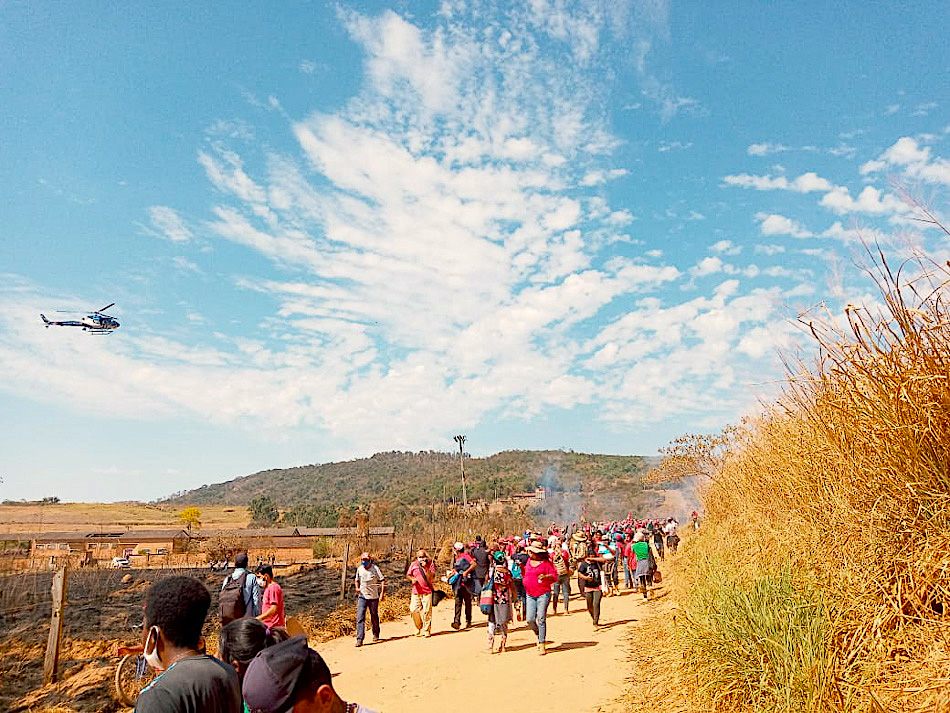 Families had tear gas hurled at them during eviction proceedings at the Quilombo Campo Grande in Minas Gerais, Brazil, July 14, 2020. (MST, Brazil)

Last week, in Brazil, the ruthlessness of state violence was on full display against the Quilombo Campo Grande community. After 60 hours of resistance against the military police, the community had to retreat from what they had built. Noam Chomsky and I wrote a message of solidarity to the families of the community, which is given below.

“On 12 August, Governor Romeu Zema of Minas Gerais sent in the military police to evict 450 families from the twenty two-year old Quilombo Campo Grande. For three days they surrounded the camp, intimidating families, in an attempt to force them to leave their land, but the landless families resisted. On 14 August, using tear gas and sound grenades, they were finally successful. They destroyed a community that had built homes and grew organic crops (including coffee, sold as Café Guaîi). In 1996, the families, organized by the Landless Workers Movement (MST), had taken over an abandoned sugar plantation (Ariadnópolis, which was owned by the Azevedo Brothers Agricultural Company). Jodil Agricultural Holdings, one of Brazil’s largest coffee producers, owned by João Faria da Silva, wanted the eviction so that it could take over production from the cooperative.

As a sign of disregard, the Governor and the military police destroyed the Eduardo Galeano Popular School, which educated children and adults. As friends of Eduardo Galeano (1940-2015), the conscience of South America, we are especially pained by the eviction and the destruction.

This eviction took place a few days after the death of Bishop Pedro Casaldáliga (1928-2020), whose life was a tribute to the struggles for the emancipation of the poor. This eviction is an insult to his memory, the man who sang:

I believe in the International
of heads held high,
of speaking as equal to equal,
and of hands linked together.

That is the way to live, hands linked together, not through tear gas and bullets fired at the peasantry by the military police. 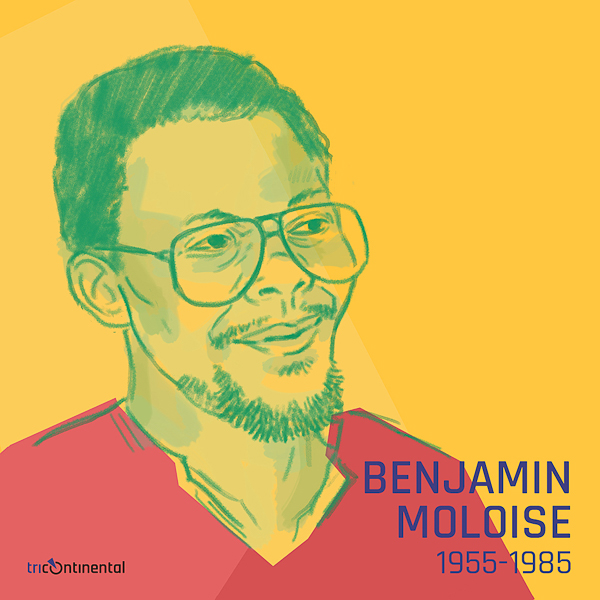 ‘Tell the People the Struggle Must Go On’

Benjamin Moloise, a factory worker and poet, was born in Alexandra, in Johannesburg, South Africa, in 1955. He joined the then-banned African National Congress (ANC) and wrote poetry. In 1982, Moloise was accused of having killed Philipis Selepe, a warrant officer. The ANC leadership in Lusaka (Zambia) admitted that it had ordered the execution of Selepe, but said that Moloise did not kill him. An international campaign to free Moloise did not dent the determination of the apartheid government to murder Moloise.

On the day of his execution on Oct. 18, 1985, Pauline Moloise — Benjamin’s mother – saw him for 20 minutes. He told her that while he did not kill Selepe, “I do not regret my involvement. Tell the people that the struggle must go on.” Almost 4,000 people spread across Johannesburg mourning his death. Mayihlome, the people cried out, a call to arms to deepen their struggle against apartheid. 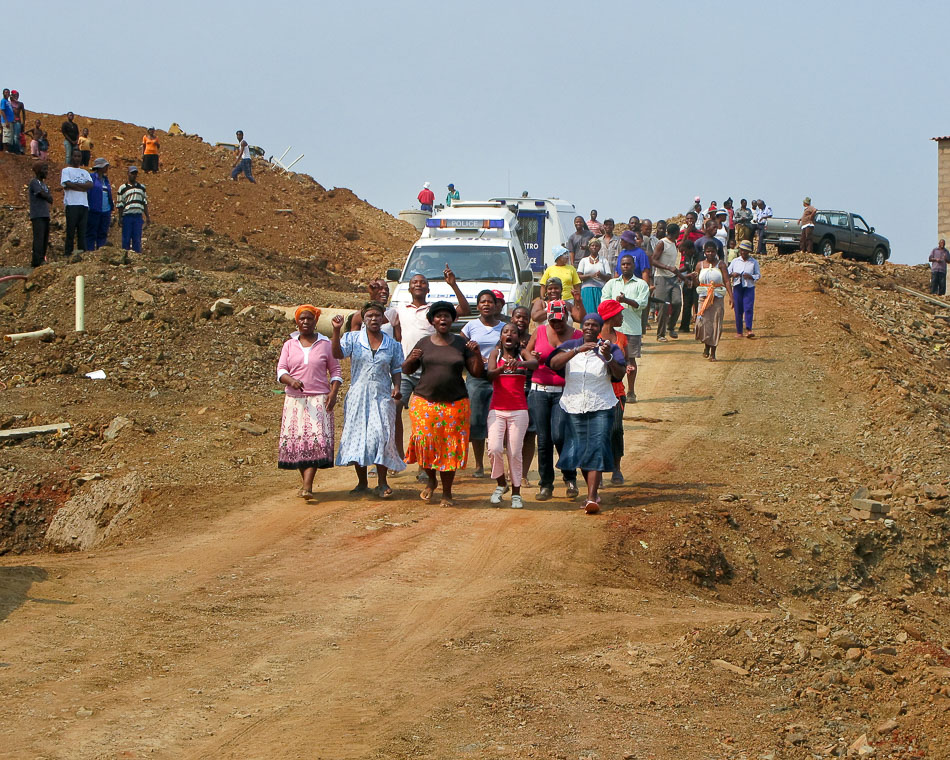 A study published in mid-July showed that two out of five adults in South Africa said that their households had lost a main source of livelihood since March 27, 2020, when the lockdown started in the country. The impact that this has on starvation is dramatic, with government policies to shield the population from hunger being minimal. Instead of sending out armed men to tear down the shacks of the people and uproot their farms, it would be far better for a state to work with local structures to arrange the distribution of necessary supplies.

This is where things are confusing: the protection of private property is far more important for these states than the protection of precious life. “Tell the people that the struggle must go on,” said Moloise before he was hung inside a cold prison surrounded by jacaranda trees.

← Warnings of Scheme to ‘Kill Postal Banking’ With ATMs in Post Offices
Oligarchic Dozen: Wealth of These 12 Tops $1 Trillion →