It’s come out in the open now in Washington that the Trump administration’s Venezuela policy is an embarrassing failure but will the next administration wise up, or double down?, asks Steve Ellner.

Senator Chris Murphy’s recent characterization of U.S. policy toward Venezuela as an “unmitigated disaster” makes it conspicuously clear that many in the political establishment recognize the need for a change in course. The statement by such an influential Democrat may signal a policy revision toward Venezuela, though not particularly comprehensive, on the part of a Joe Biden administration.

Murphy (CT-D), who made his remarks to Special Representative for Venezuela Elliott Abrams at an Aug. 4 Foreign Relations Committee hearing, pointed out that dissension within the Venezuelan opposition threatens the leadership of self-proclaimed “president” Juan Guaidó. Murphy asked Abrams: “Is Juan Guaidó [for the Trump administration] going to be the recognized leader of Venezuela permanently, no matter how conditions change on the ground?”

The question was a good one because the success of Trump’s Venezuela strategy is predicated on Guaidó’s continued undisputed leadership. There’s no fall-back strategy.

Since Guaidó’s self-proclamation on Jan. 23, 2019, Washington has gone all out to gain world-wide recognition for him and to undermine President Nicolás Maduro’s grip on power. But regime change attempts have turned into one folly after another, including a U.S.-backed military coup attempt on April 30, 2019, and a military incursion from Colombia this May. Even Trump admitted that the politically untested Guaidó (who just turned 37) has not been up to the task.

Murphy stated at the Senate committee hearing “our big play recognizing Guaidó right out of the gate…just didn’t work.”

Yet one would think from the words and actions coming out of the White House that just the opposite was happening: that Guaidó was on the verge of toppling Maduro. Every couple of days the Trump administration, eager for a resounding success to be parlayed into votes in November, escalates its war on Venezuela, which it considers to be a more vulnerable target than Iran.

On June 14, Trump boasted that four oil tankers en route from Iran to Venezuela were forced by the U.S. to proceed to Houston.

The same day a State Department spokesman touted the success of its “maximum pressure campaign” in which “more and more global shipping fleets [are] avoiding the Iran-Venezuela trade due to our sanctions,” which are now being used to threaten shipping companies, insurance companies and ship captains, among others.

Washington’s lingering hope is undoubtedly that the situation in Venezuela will go from bad to worse.

This was alluded to by think-tank analyst and State Department advisor Evan Ellis in his report “Venezuela: Pandemic and Foreign Intervention in a Collapsing Narcostate.” Ellis points out that “Covid-19 now promises to transform the Venezuelan crisis into a broader one.” He adds “the death sentence implied by the disease could be the final straw in disintegrating the remaining discipline of the military and other security forces.” 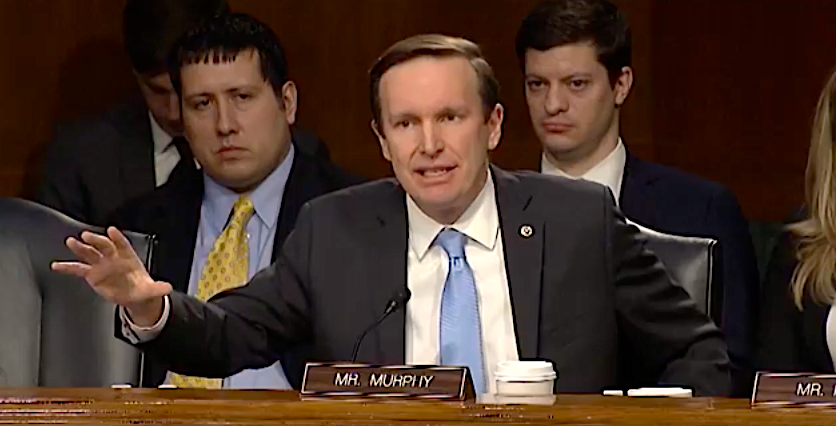 Murphy’s arguments at the Senate hearing were pragmatic, not principled. His position that Trump’s Venezuelan strategy hasn’t worked suggests the possibility of a distancing of a President Biden from Guaidó. Murphy’s stand has positive and negative implications. Positive because it comes from a party whose main leaders zealously applauded Guaidó’s presence at Trump’s State of the Union address in February. (Remember Democratic House Speaker Nancy Pelosi standing up and clapping, in contrast to her reaction to almost everything else Trump said that evening.)

The decision to cease calling Guaidó “president” would be a tacit recognition that Washington had blundered in turning over billions of dollars in Venezuelan assets, including CITGO, to Guaidó’s parallel government. This is no small failure. The activist role of the Trump administration in trying to get other countries, organizations and corporations including Russia, China, Cuba and, believe it or not, Iran to comply with the sanctions against Venezuela has few parallels in history.

Washington’s case for sanctions is underpinned by the argument that Guaidó and not Maduro is the rightful president of Venezuela. A distancing from Guaidó would detract from this campaign and undermine U.S. prestige, at least in the short run.

Murphy, to his credit, recognized that the opposition in Venezuela is bitterly divided. The Trump administration dismisses the opposition’s anti-Guaidó bloc as consisting of rogue politicians, some of whom it has hit with sanctions. But recently, the Catholic Church hierarchy, which has vehemently opposed Maduro and his predecessor Hugo Chávez, sharply criticized the pro-Guaidó bloc for refusing to participate in parliamentary elections slated for December.

On August 11, the Venezuelan Episcopal Conference issued a document which stated “abstentionism deepens the social-political fissure in the nation and the lack of hope toward the future.” In another recent development, Enrique Mendoza of the social Christian COPEI party became the latest in a list of long-standing political leaders who are participating in the December elections. The U.S. media says little of news items like this one which discredit Guaidó and his allies.

Trump talks tough on Venezuela, but admires thugs and dictators like Nicolas Maduro.

As President, I will stand with the Venezuelan people and for democracy. https://t.co/eUt28UxyXS

But Murphy’s position is a far cry from addressing the real issues and the lessons that need to be learned from the Guaidó fiasco, namely the importance of respect for national sovereignty. Rather than facing the issue, Murphy rebuked Abrams and Trump for not being more intelligent in trying to achieve regime change.

The senator told Abrams: “We could have used the prospect of U.S. recognition or sanctions as leverage” and could have done more to consult our European allies and to “talk to or neutralize China and Russia” at an early stage. In short, “all we did was play all our cards on day one, and it didn’t work.”

The issue of national sovereignty is manifesting itself in Venezuela in the debate between the pro and anti-Guaidó opposition factions, a development the U.S. media is also oblivious to. The anti-Guaidó faction has taken up the national sovereignty banner. Miguel Salazar, president of the conservative COPEI party, recently stated (in the words of El Universal) “the international community has exacerbated the [Venezuelan] conflict even though the resolution of problems has to be in Venezuelan (hands) and not subject to the guidelines of the United States.”

The banner of national sovereignty is being raised by Washington’s two major adversaries on the world stage, China and Russia, in their pronouncements on Venezuela in a way that enhances their international reputation. Indeed, the United States is increasingly finding itself isolated on the world stage, as made evident in last Friday’s humiliating defeat at the UN Security Council where the U.S. counted only on the vote of the Dominican Republic for its proposed renewal of the boycott on arms sales to Iran.

Although it is highly unlikely that a President Biden will do a complete turnaround on Venezuelan policy, a more hands-off approach would go a long way in easing tensions in that nation and achieving for Washington a degree of respect around the world.