No matter who wins in November, opaque agencies will have already primed the nation for more dangerous military escalations against countries outside the blob of the U.S.-centralized empire, writes Caitlin Johnstone. 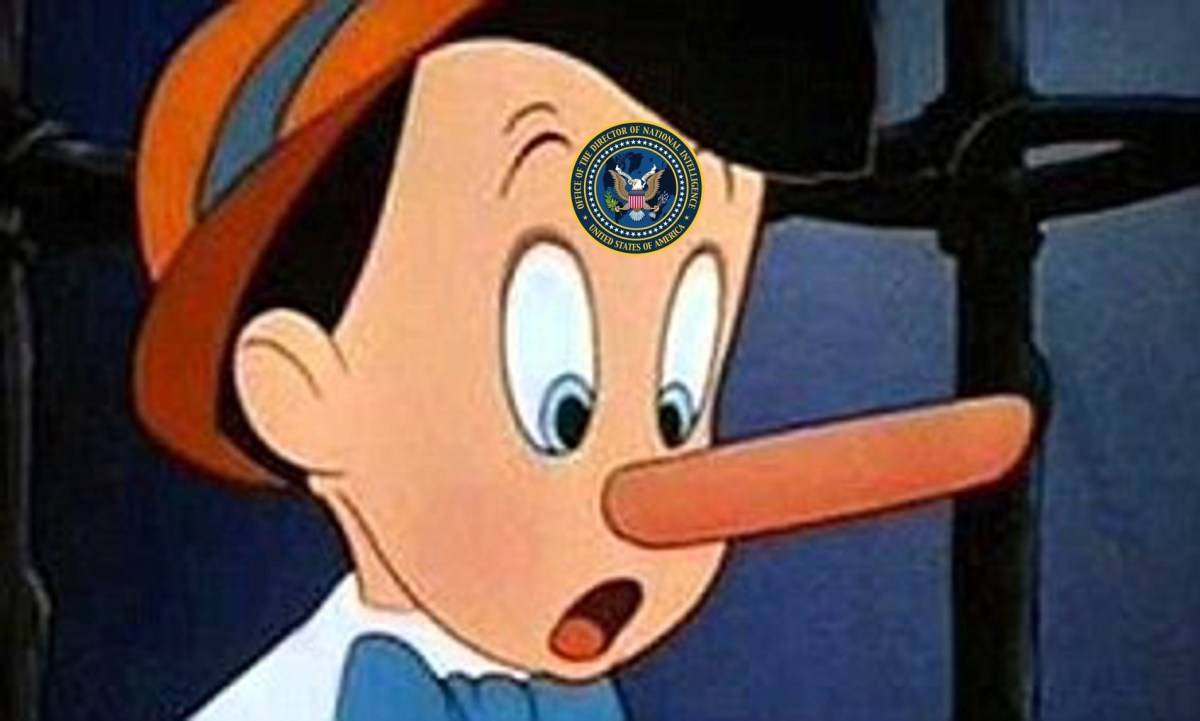 Back in April I said “China’s gonna be so surprised when it finds out it interfered in the November election.”

Now three months ahead of schedule China is already getting its surprise, alongside fellow unabsorbed governments Iran and Russia.

U.S. intelligence agencies say China and Iran are working to sway voters against Trump while Russia is working against Biden https://t.co/enFRpMEBkr

Mass media throughout the Western world are uncritically passing along a press release from the U.S. intelligence community, because that’s what passes for journalism in a world where God is dead and everything is stupid.

The press release, from the Office of the Director of National Intelligence and authored by National Counterintelligence and Security Center Director William Evanina, claims that Russia wants Donald Trump to win re-election in November and is pushing to advance than goal, while China and Iran are doing the same with Joe Biden.

“We assess that China prefers that President Trump – whom Beijing sees as unpredictable – does not win reelection,” the press release reads. “China has been expanding its influence efforts ahead of November 2020 to shape the policy environment in the United States, pressure political figures it views as opposed to China’s interests, and deflect and counter criticism of China.”

“We assess that Russia is using a range of measures to primarily denigrate former Vice President Biden and what it sees as an anti-Russia ‘establishment,’” the press release claims. “Some Kremlin-linked actors are also seeking to boost President Trump’s candidacy on social media and Russian television.”

“We assess that Iran seeks to undermine U.S. democratic institutions, President Trump, and to divide the country in advance of the 2020 elections,” says the press release. “Iran’s efforts along these lines probably will focus on on-line influence, such as spreading disinformation on social media and recirculating anti-U.S. content. Tehran’s motivation to conduct such activities is, in part, driven by a perception that President Trump’s reelection would result in a continuation of U.S. pressure on Iran in an effort to foment regime change.”

What this completely unsubstantiated narrative means, of course, is that no matter who wins in November America’s opaque government agencies will have already primed the nation for more dangerous escalations against countries which have resisted being absorbed into the blob of the U.S.-centralized empire. If Trump wins we can expect his administration to continue its escalations against Russia in retaliation for its 2020 “election interference,” and if Biden wins we can expect his cabinet of Obama administration holdovers to ramp up escalations against China in the same way while Joe mumbles to himself off to the side as his brain turns to chowder.

There is never a legitimate reason to believe any unproven claim made by unaccountable spook agencies about U.S.-targeted governments, but even if everything in this press release were true it’s an incredibly stupid thing to care about. The influence that Russia, China or Iran could exert over public opinion in the United States is a tiny fraction of that which is exerted by the unaccountable U.S. billionaire media every single day, which already has its own factions pushing for Biden over Trump and Trump over Biden. Adding some foreign social media operations into the mix would change literally nothing.

Secondly, as the press release itself acknowledges, the U.S. is openly pushing regime change in Iran. It is already engaging in various acts of economic warfare against all three of the named governments, and it openly interfered in Russia’s elections in the nineties to a far greater extent than anything it has even accused Russia of doing. The U.S. government’s own data shows that it is the very worst election meddler in the world by an extremely wide margin, which would make it a perfectly legitimate target for election interference by any nation on earth.

Lastly, the dumbest thing about believing foreign nations are interfering in American democracy is believing America has any democracy to interfere with. The integrity of U.S. elections ranks dead last among all Western democracies, public opinion is constantly manipulated by the media-owning plutocratic class which has a vested interest in maintaining the status quo which keeps them rich and powerful, and it’s a two-headed one party system where both corporate-owned parties advance the same Establishment agendas.

Imagine believing that foreign leaders are looking at the dumpster fire that is the United States and thinking “I know how we can hurt them! We’ll sow division by saying mean things about their presidential candidates on social media!”

It’s the dumbest thing in the world. Yet all the Establishment narrative managers are jumping on this intelligence community press release as a real thing that we should all be excited about.

“If you want to know why Donald Trump will not confront Vladimir Putin about these allegations of bounties on U.S. soldiers — well there you go,” Rep. Swalwell says of the ODNI report on foriegn interference in the election.
https://t.co/m3jDqjY290

Trump says “I don’t care what anybody says” when intel agencies disclosed Russia is interfering in our election to hurt Biden.

Of course he doesn’t.

He has solicited foreign help again and again.

He doesn’t care about our democracy. Only himself.

All this hand-wringing and arm-waving about foreign interference on social media comes as social media itself makes policy changes to ensure that only Western governments are allowed to conduct propaganda on its platforms, with Twitter instituting a new policy of labeling accounts from unabsorbed governments as “state-affiliated media” while placing no labels or restrictions on any accounts with extensive Western government ties.

The overall message in all this is that only Western government agencies and oligarchs may conduct propaganda on those who live in the U.S.-centralized empire. It should enrage us all that these unaccountable abusers feel so entitled to insert their rapey fingers in our minds and manipulate how we think, act and vote that they get all chest-thumpy about the idea of anyone else getting a word in edgewise. They do this because they understand that whoever controls the narrative controls the world, and there is no amount of evil they won’t do to ensure that they continue to control the world.

The reason sociopaths are able to insert themselves so easily into positions of power and influence in human civilization is because highly manipulative people with no empathy quickly learn that society is dominated by narrative, while the rest of us do not understand this. This must change before we will be able to create a healthy world.

20 comments for “US Intelligence: If Trump Wins Russia Did It, If Biden Wins It Was China & Iran”