After the U.S. atomic bombings of Hiroshima and Nagasaki On Aug. 6 and Aug. 9, 1945, there then ensued a U.S. propaganda campaign to claim the slaughter of more than 200,000 people saved lives, writes John LaForge.

The U.S. atomic destruction of 140,000 people at Hiroshima and 70,000 at Nagasaki was never “necessary” because Japan was already smashed, no land invasion was needed and Japan was suing for peace. The official myth that “the bombs saved lives” by hurrying Japan’s surrender can no longer be believed except by those who love to be fooled.

The long-standing fiction has been destroyed by the historical record kept in U.S., Soviet, Japanese and British archives — now mostly declassified — and detailed by Ward Wilson in his book Five Myths About Nuclear Weapons (Houghton Mifflin Harcourt, 2013).

Greg Mitchell’s Atomic Cover-Up (Sinclair Books, 2011) also helps explain the durability of the “saved lives” ruse. Wartime and occupation censors seized all films and still photos of the two atomic cities, and the U.S. government kept them hidden for decades.

Even in 1968, newsreel footage from Hiroshima held in the National Archives was stamped, “SECRET, Not To Be Released Without the Approval of the DOD.” Photos of the atomized cities that did reach the public merely showed burned buildings or mushroom clouds — rarely human victims.

In Hiroshima in America: 50 Years of Denial, (Grosset/Putnam, 1995) Robert Lifton and Mitchell note that Gen. Leslie Groves, head of the Manhattan Project, “left nothing to chance.” Even before Hiroshima, he prohibited U.S. commanders from commenting on the atomic attacks without clearance from the War Department.

“We didn’t want MacArthur and others saying the war could have been won without the bomb,” Groves said.

In fact, MacArthur did not believe the bomb was needed to end the war, but he too established a censorship program as commander of the U.S. occupation of Japan. He banned reporters from visiting Hiroshima or Nagasaki, expelled reporters who defied the ban and later said that those who complained that censorship existed in Japan were engaged in “a maliciously false propaganda campaign.”

That most people in the United States still believe the “saved lives” rationale to be true is because of decades of this censorship and myth-making, begun by President Harry Truman, who said Aug. 6, 1945, “Sixteen hours ago an American airplane dropped one bomb on Hiroshima, an important Japanese Army base. That was because we wished this first attack to avoid, insofar as possible, the killing of civilians.”

In fact, the city of 350,000 had practically no military value at all and the target was the city, not the base three kilometers away.

Taking President Truman at his word, the 140,000 civilians killed at Hiroshima are the minimum to be expected when exploding a small nuclear weapon on a “military base.” Today’s “small” Cruise missile warheads, which are 12 times the power of Truman’s A-bomb could kill 1.68 million each.

Official censorship of what the two bombs did to people and the reasons for it has been so successful, that 25 years of debunking hasn’t managed to generally topple the official narrative. 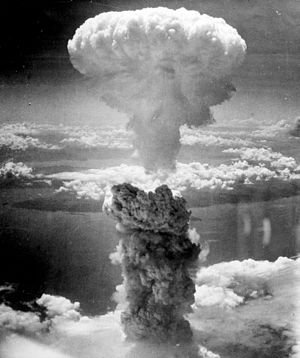 In 1989, historian Gar Alperovitz reported, “American leaders knew well in advance that the bombing of Hiroshima and Nagasaki was not required to bring about Japan’s surrender;” and later, in his 847-page The Decision to Use the Atomic Bomb (Random House, 1995), “I think it can be proven that the bomb was not only unnecessary but known in advance not to be necessary.” The popular myth “didn’t just happen,” Alperovitz says, “it was created.”

Kept hidden for decades was the 1946 U.S. Strategic Bombing Survey’s conclusion that Japan almost certainly would have surrendered in 1945 without the atomic bombs, without a Soviet invasion and without a U.S. invasion. Not long after V-J Day in 1945, Brig. Gen. Bonnie Feller wrote, “Neither the atomic bombing nor the entry of the Soviet Union into the war forced Japan’s unconditional surrender. She was defeated before either of these events took place.”

President Dwight D. Eisenhower, a five-star general and the Supreme Allied Commander in Europe, said in his memoirs he believed “that Japan was already defeated and that dropping the bomb was completely unnecessary.”

Adm. William Leahy, the wartime Chairman of the Joint Chiefs of Staff, wrote in 1950, “It is my opinion that the use of this barbarous weapon at Hiroshima and Nagasaki was of no material success in our war against Japan. The Japanese were already defeated and ready to surrender.”

Feller’s, Ike’s and Leahy’s opinions were conspicuously left out of or censored by the Smithsonian Institution’s 1995 display of the atomic B-29 bomber “Enola Gay.”

Admiral Leahy’s 1950 myth-busting and censor-busting about the Bomb could be an epitaph for the nuclear age: “I was not taught to make war in that fashion,” he said of Hiroshima’s incineration, “and wars cannot be won by destroying women and children.”

John LaForge writes for PeaceVoice, is co-director of Nukewatch,a nuclear watchdog and environmental justice group,and lives at the Plowshares Land Trust out of Luck, Wisconsin.

← WATCH: What Would Assange Face in the US?
ATOMIC BOMBINGS AT 75: The Darkness of August 9 →

37 comments for “ATOMIC BOMBINGS AT 75: The Enduring Myth of Hiroshima & Nagasaki”