With the death on Friday of former National Security Adviser Gen. Brent Scowcroft at 95, we look back at a very telling encounter the late, founding editor of this website had with the general.

In my three decades-plus in Washington journalism, I have witnessed the creeping opportunism behind the claim of doing “what’s good for the country,” which usually translates into keeping unpleasant truths from the American people, and spares politicians and journalists from the difficult task of having to speak ill of some U.S. government actions.

This tendency extends beyond the battlefield. For instance, in early November 1968 when President Lyndon Johnson felt he was on the verge of negotiating an end to the Vietnam War, he learned that Richard Nixon’s political operatives were trying to sabotage the peace talks as a means of ensuring Nixon’s electoral victory.

When Johnson considered exposing Nixon’s “treason,” the President was dissuaded by then-Defense Secretary Clark Clifford who feared that the disclosure might undermine Nixon’s legitimacy if he won the election anyway.

“Some elements of the story are so shocking in their nature that I’m wondering whether it would be good for the country to disclose the story and then possibly have a certain individual [Nixon] elected,” Clifford said in a Nov. 4, 1968, conference call, which was released by Johnson’s presidential library four decades later.

Johnson acceded to Clifford’s “good for the country” advice. Nixon’s “treason” remained secret; he narrowly won the presidential election against then-Vice President Hubert Humphrey; Johnson went quietly into retirement; the war dragged on another four years claiming the lives of 20,763 more U.S. soldiers and about a million more Vietnamese. [For details, see Consortiunews.com’s “The Significance of Nixon’s Treason.”]

With this ugly Nixon reality kept from the American people, the Right was able to formulate a case blaming almost everyone but Nixon for the eventual U.S. defeat in Vietnam.

Indeed, by the late 1970s, a resurgent right-wing movement had composed a revisionist history of the Vietnam War – accusing liberal Democrats, anti-war youth and skeptical war correspondents of betraying the nation at a time of war, of serving as a veritable fifth column for the enemy.

During Ronald Reagan’s presidency, that version of history grew dominant as the Right’s media infrastructure expanded exponentially and the American Left largely ignored the need to build media or otherwise engage in what the Right called “the war of ideas.”

As a result of this shifting power dynamic – the Right’s ascendancy and the Left’s decline – mainstream U.S. journalists sought self-protection by soft-peddling critical information about the Reagan administration, thus enabling national security scandals to remain secret or go severely under-reported deep into the 1980s.

In that climate, the Washington news media had little stomach for exposing the Iran-Contra affair, Nicaraguan contra cocaine trafficking, political murders and even genocide by U.S. allies in Central America, and the dangers of arming Saddam Hussein in Iraq and Islamic extremists in Afghanistan. 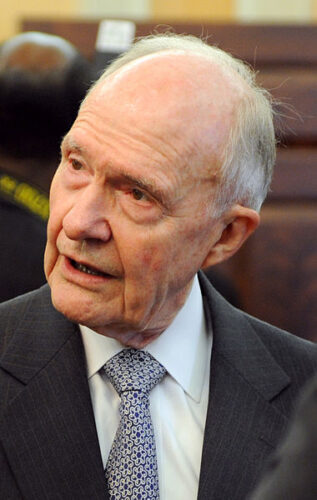 I encountered this new media reality while pressing ahead on some of those scandal stories for the Associated Press and later Newsweek. I came face-to-face with the “good for the country” argument during my early days at Newsweek, at a March 10, 1987, dinner at the home of Washington bureau chief Evan Thomas.

The invited guests of honor were retired Gen. Brent Scowcroft, who had been one of three members of the Tower Board which had just completed an initial investigation of the Iran-Contra arms-for-hostages scandal, and Rep. Dick Cheney, who was the ranking Republican on the House Iran-Contra panel which was just beginning its work. Also in attendance were top Newsweek executives down from New York and a few other lowly correspondents, like me.

At that time, a key question in the Iran-Contra scandal was whether Reagan’s national security adviser, Admiral John Poindexter, had informed the President about the diversion of profits from arms sales to Iran to Reagan’s beloved contras fighting along the Nicaraguan border.

As the catered dinner progressed, Scowcroft piped up: “I probably shouldn’t say this, but if I were advising Admiral Poindexter and he had told the President about the diversion, I would advise him to say that he hadn’t.”

I was startled. Here was a Tower Commission member acknowledging that he really wasn’t interested in the truth after all, but rather political expediency. Not familiar with the etiquette of these Newsweek affairs, I stopped eating and asked Scowcroft if he understood the implication of his remark.

“General,” I said, “you’re not suggesting that the admiral should commit perjury, are you?”

There was an awkward silence around the table as if I had committed some social faux pas. Then, Newsweek executive editor Maynard Parker, who was sitting next to me, boomed out: “Sometimes, you have to do what’s good for the country.”

Parker’s riposte was greeted with some manly guffaws; Scowcroft never answered my question; and the uncomfortable moment soon passed.

In the following months, it also became clear that Parker wasn’t joking. The opportunity inside Newsweek to pursue the truth about the Iran-Contra scandal disappeared. The deceptive testimony of senior officials, such as Defense Secretary Caspar Weinberger and Secretary of State George Shultz, was accepted with a near total lack of skepticism.

There was a sense that getting to the bottom of the Iran-Contra scandal – and facing up to the roles of President Reagan and Vice President George H.W. Bush in violating the Arms Export Control Act, engaging in criminal money-laundering and defying Congress on its prohibition of military aid to the contras – would not be “good for the country.”

When I pressed ahead anyway, Parker complained to Thomas that I must be out “to get” Reagan and Bush. I realized that my days at Newsweek were numbered and agreed to leave in 1990.

Ironically, however, Iran-Contra special prosecutor Lawrence Walsh was coming to the same conclusion that I had reached, that we were witnessing a well-coordinated high-level cover-up — and the reemergence of Nixon’s theories about the imperial presidency.

The “good for the country” arguments were most prevalent when the wrongdoing was committed by Republicans. After all, the emergence of a generously funded and quite nasty right-wing news media in the 1980s and 1990s had reshaped the political dynamics of Washington.

So, for instance, in December 2000, when George W. Bush muscled his way toward the presidency by getting political allies to disrupt and then shut down a recount in Florida, the prevailing mood in the U.S. news media was that it was important for national unity to let Bush have his way.

That sentiment grew even stronger after 9/11. And it proved decisive when an unofficial Florida recount conducted by major news organizations discovered that if all legally cast votes had been counted, Al Gore would have carried the state and become President.

However, amid the super-patriotic mood after 9/11, the news executives again bent to what was supposedly “good for the country.” They fashioned their story leads to focus on various hypothetical partial recounts that still would have favored Bush, while burying deep in the articles the startling fact that the wrong man was in the White House.

While framing those recount stories may have reflected the political reality of fall 2001 – one could only imagine the complaints a news organization would have received if it had simply laid out the truth – the decision to contort those stories had a lasting political effect, creating the impression for many Americans that Bush was the legitimate winner in Election 2000.

That, in turn, encouraged Bush to move ahead with his increasingly grandiose view of his own righteous destiny, including his gut instinct about invading Iraq.

The miswritten election stories also gave Bush more credibility when he ran again in 2004. Some voters may have viewed him differently if they understood that he had stolen the election in 2000.

As the Bush administration ground on, there were other examples of the U.S. news media covering up presidential wrongdoing for “the good of the country.”

For instance, Bush convinced The New York Times executives to spike a story about warrantless wiretaps of Americans, an article that was ready before Election 2004 but which was held for more than a year and was only published then because the reporter, James Risen, was including the disclosure in a book that was about to be released.

Looking back at America’s destructive trajectory of the past several decades, the lesson appears to be clear. Hiding or spinning the truth – even for supposedly “patriotic” reasons – often can end up causing grave damage to a democratic Republic and simultaneously getting people killed for no particularly good reason.

Whether a government official or a news executive, the responsible act is almost always to disclose the truth. The moments when the truth legitimately should be hidden should be few and specific, such as the identity of an undercover intelligence officer or tactical details about a military project.

When those exceptions start expanding – when politicians and journalists see the career upside of concealing facts and appearing “patriotic” – the impact, especially in the long-term, can be extremely detrimental to a democratic Republic and very dangerous for its soldiers.

The late Robert Parry broke many of the Iran-Contra stories in the 1980s for the Associated Press and Newsweek. His latest book, Neck Deep: The Disastrous Presidency of George W. Bush, was written with two of his sons, Sam and Nat, and can be ordered at neckdeepbook.com. His two previous books, Secrecy & Privilege: The Rise of the Bush Dynasty from Watergate to Iraq and Lost History: Contras, Cocaine, the Press & ‘Project Truth’ are also available there.

← ATOMIC BOMBINGS AT 75: Hiroshima and the Backlash Against Historical Truth
COVID-19: Humanity’s Cries Against the Crimes of Death →