The human race stands on the verge of nuclear self-extinction as a species, and with it will die most, if not all, forms of intelligent life on the planet earth. Any attempt to dispel the ideology of nuclearism and its attendant myth propounding the legality of nuclear weapons and nuclear deterrence must directly come to grips with the fact that the nuclear age was conceived in the original sins of Hiroshima and Nagasaki on August 6 and 9, 1945.

The atomic bombings of Hiroshima and Nagasaki constituted crimes against humanity and war crimes as defined by the Nuremberg Charter of August 8, 1945 [promulgated two days after Hiroshima and a day before Nagasaki], and violated several basic provisions of the Regulations annexed to Hague Convention No. 4 Respecting the Laws and Customs of War on Land (1907), the rules of customary international law set forth in the Draft Hague Rules of Air Warfare (1923), and the United States War Department Field Manual 27-10, Rules of Land Warfare (1940). 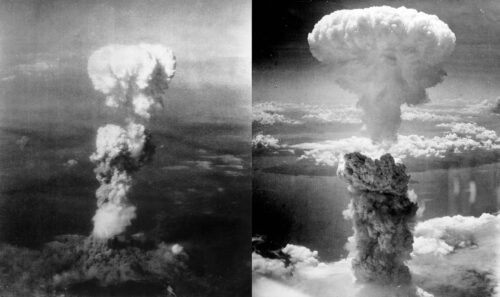 According to this Field Manual and the Nuremberg Principles, all civilian government officials and military officers who ordered or knowingly participated in the atomic bombings of Hiroshima and Nagasaki could have been lawfully punished as war criminals.

The start of any progress toward resolving humankind’s nuclear predicament must come from the realization that nuclear weapons have never been legitimate instruments of state policy, but rather have always constituted illegitimate instrumentalities of internationally lawless and criminal behavior.

The Use of Nuclear Weapons

The use of nuclear weapons in combat was, and still is, absolutely prohibited under all circumstances by both conventional and customary international law: e.g., the Nuremberg Principles, the Hague Regulations of 1907, the International Convention on the Prevention and Punishment of the Crime of Genocide of 1948, the Four Geneva Conventions of 1949 and their Additional Protocol I of 1977, etc.

Consequently, according to the Nuremberg Judgment, soldiers would be obliged to disobey egregiously illegal orders with respect to launching and waging a nuclear war.

Second, all government officials and military officers who might nevertheless launch or wage a nuclear war would be personally responsible for the commission of Nuremberg crimes against peace, crimes against humanity, war crimes, grave breaches of the Geneva Conventions and Protocol 1, and genocide, among other international crimes.

Third, such individuals would not be entitled to the defenses of superior orders, act of state, tu quoque, self-defense, presidential authority, etc.

Fourth, such individuals could thus be quite legitimately and most severely punished as war criminals, up to and including the imposition of the death penalty, without limitation of time.

The Threat to Use Nuclear Weapons 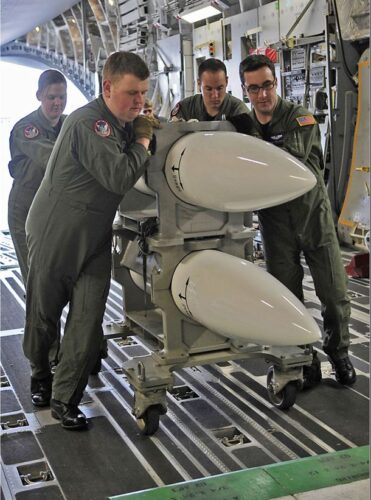 For the legality of any threat or use of force must also take into account the customary and conventional international laws of humanitarian armed conflict.

Thereunder, the threat to use nuclear weapons (i.e., nuclear deterrence/terrorism) constitutes ongoing international criminal activity: namely, planning, preparation, solicitation and conspiracy to commit Nuremberg crimes against peace, crimes against humanity, war crimes, genocide, as well as grave breaches of the Four Geneva Conventions of 1949, Additional Protocol I of 1977, the Hague Regulations of 1907, and the International Convention on the Prevention and Punishment of the Crime of Genocide of 1948, inter alia. These are the so-called inchoate crimes that under the Nuremberg Principles constitute international crimes in their own right.

The conclusion is inexorable that the design, research, testing, production, manufacture, fabrication, transportation, deployment, installation, maintenance, storing, stockpiling, sale, and purchase as well as the threat to use nuclear weapons together with all their essential accouterments are criminal under well-recognized principles of international law.

Thus, those government decision-makers in all the nuclear weapons states with command responsibility for their nuclear weapons establishments are today subject to personal criminal responsibility under the Nuremberg Principles for this criminal practice of nuclear deterrence/terrorism that they have daily inflicted upon all states and peoples of the international community. 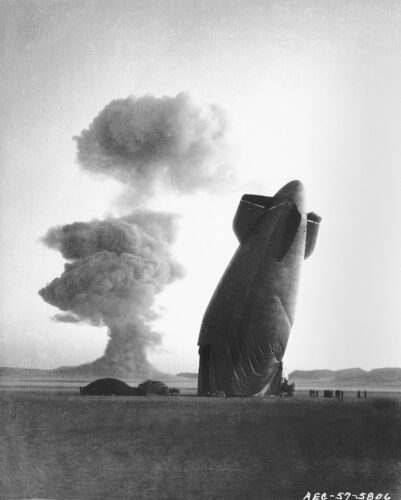 Here I wish to single out four components of the threat to use nuclear weapons that are especially reprehensible from an international law perspective: counter-ethnic targeting; counter-city targeting; first-strike weapons and contingency plans; and the first-use of nuclear weapons even to repel a conventional attack.

The Criminality of Nuclear Weapons And Nuclear Deterrence

As can be determined in part from the preceding analysis, today’s nuclear weapons establishments as well as the entire system of nuclear deterrence/terrorism currently practiced by all the nuclear weapon states are criminal — not simply illegal, not simply immoral, but criminal under well established principles of international law. 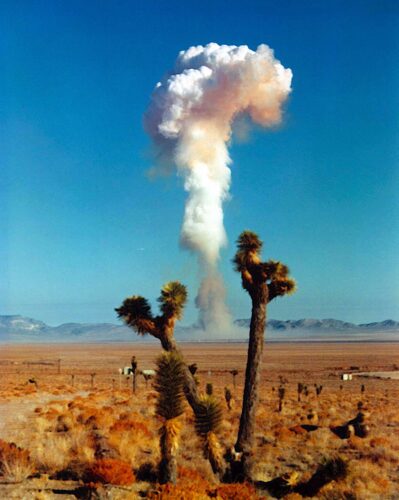 A balloon burst fired at the Nevada Test Site in 1958. (U.S. Government)

Humankind must abolish nuclear weapons before nuclear weapons abolish humankind. Nonetheless, a small number of governments in the world community continue to maintain nuclear weapons systems despite the rules of international criminal law to the contrary.

This has led some international lawyers to argue quite tautologically and disingenuously that since there exist a few nuclear weapons states in the world community, therefore nuclear weapons must somehow not be criminal because otherwise these few states would not possess nuclear weapons systems.

In other words, to use lawyers’ parlance, this minority state practice of nuclear deterrence/terrorism practiced by the great powers somehow negates the existence of a world opinio juris (i.e., sense of legal obligation) as to the criminality of nuclear weapons.

There is a very simple response to that specious argument: Since when has a small gang of criminals — in this case, the nuclear weapons states — been able to determine what is legal or illegal for the rest of the community by means of their own criminal behavior?

What right do these nuclear weapons states have to argue that by means of their own criminal behavior they have ipso facto made criminal acts legitimate? No civilized nation state would permit a small gang of criminal conspirators to pervert its domestic legal order in this manner.

Moreover, both the Nuremberg Tribunal and the Tokyo Tribunal made it quite clear that a conspiratorial band of criminal states likewise has no right to opt out of the international legal order by means of invoking their own criminal behavior as the least common denominator of international deportment. Ex iniuria ius non oritur is a peremptory norm of customary international law. Right cannot grow out of injustice.

To the contrary, the entire human race has been victimized by an international conspiracy of ongoing criminal activity carried out by the nuclear weapons states under the doctrine known as “nuclear deterrence,” which is really a euphemism for “nuclear terrorism.” 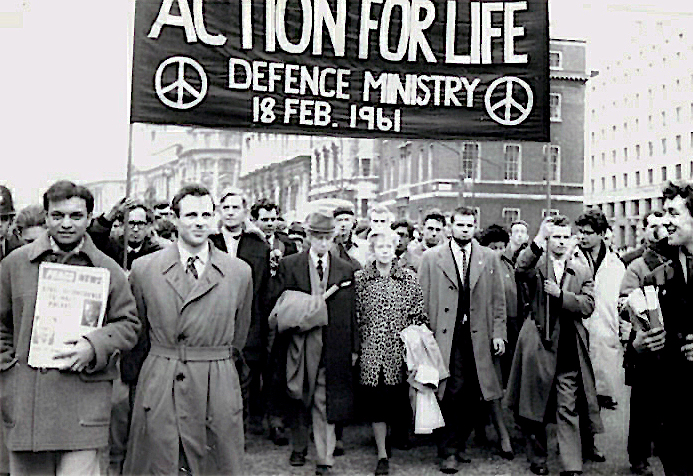 Bertrand Russell & his wife Edith Russell lead anti-nuclear march by the Committee of 100 in London on Sat 18 Feb 1961. (Wikimedia Commons)

In light of the fact that nuclear weapons systems are prohibited, illegal, and criminal under all circumstances and for any reason, every person around the world possesses a basic human right to be free from this criminal practice of nuclear deterrence/terrorism and its concomitant specter of nuclear extinction.

Thus, all human beings possess the basic right under international law to engage in non-violent civil resistance activities for the purpose of preventing, impeding, or terminating the ongoing commission of these international crimes.

Every citizen of the world community has both the right and the duty to oppose the existence of nuclear weapons systems by whatever non-violent means are at his or her disposal. Otherwise, the human race will suffer the same fate as the dinosaurs, and the planet earth will become a radioactive wasteland. The time for preventive action is now.

← PATRICK LAWRENCE: A United State of Delusion
ATOMIC BOMBINGS AT 75: The Decision to Drop the Bomb on Japan and the Genesis of the Cold War →

6 comments for “ATOMIC BOMBINGS AT 75: The Illegality of Nuclear Weapons”