America is not based on hard work. Get it out of your head that this society is set up to be fair. Fair would be everyone with a roof over their head. 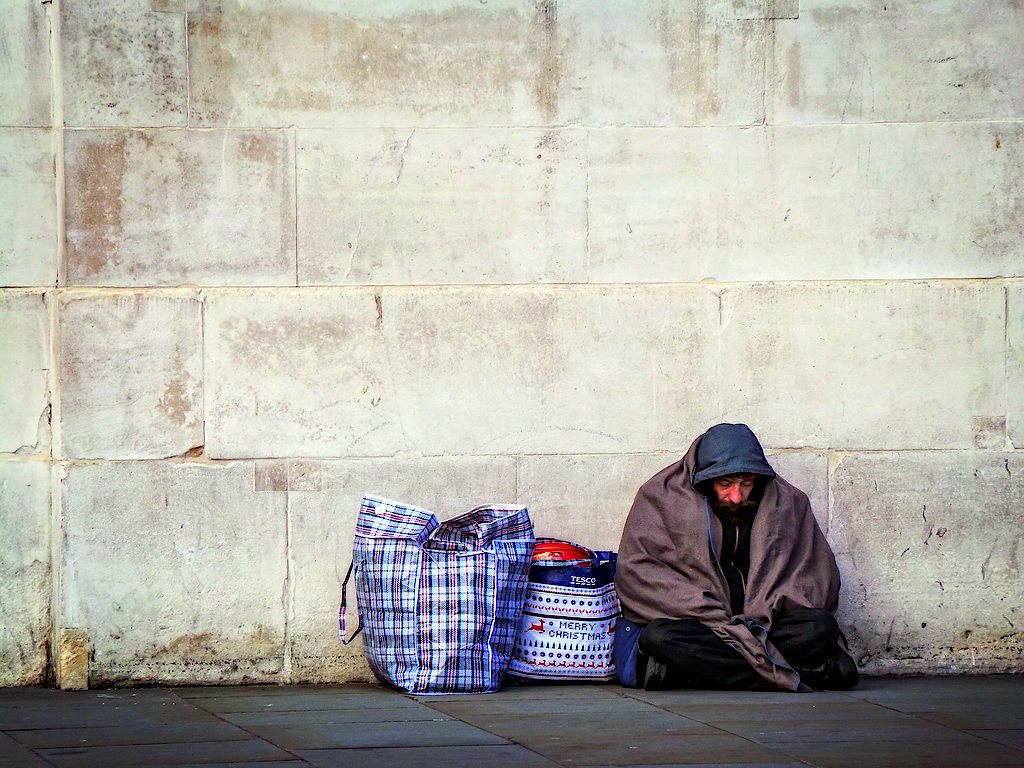 Congress’s inability to actually represent the real-live human beings of America, combined with an economic system that rewards lack of empathy and an excess of greed, has brought us to a dark time when an oncoming tsunami of financial ruin, destitution and evictions towers over our heads, blocking out the sunlight.

The impending evictions may soon kick 28 million people/families out of their homes. To put that in perspective, only ten million people lost their homes during the 2008 economic crisis, and that was considered by anyone paying attention to be the craziest thing to ever happen.

What we’re facing now could be three times crazier, getting to Charlie Sheen levels. (I almost wrote “Kanye West levels” but everything he does is in hopes of being mentioned in the media, and I’m not falling for it. …Shit. This parenthetical has betrayed me!)

To talk about the impending homelessness tsunami, we have to first get past the fact that our government could totally bail people out and keep them in their homes. Not only have they already bailed out big banks and Wall Street to the tune of $4.25 Trillion, but on top of that the Pentagon has over $21 Trillion of unaccounted-for adjustments on their books over the past 20 years. This is to say – there’s plenty of money.

Money is an idea, a concept, an imaginary metaphysical belief, and it’s high time we faced the fact that the U.S. government has an unlimited imagination. As philosopher Alan Watts once put it: Money is not a thing, it’s a measurement. Saying there’s not enough money to do something is like a builder saying there’s not enough inches to build a house. He has the wood, nails and hammers. He’s just out of inches. 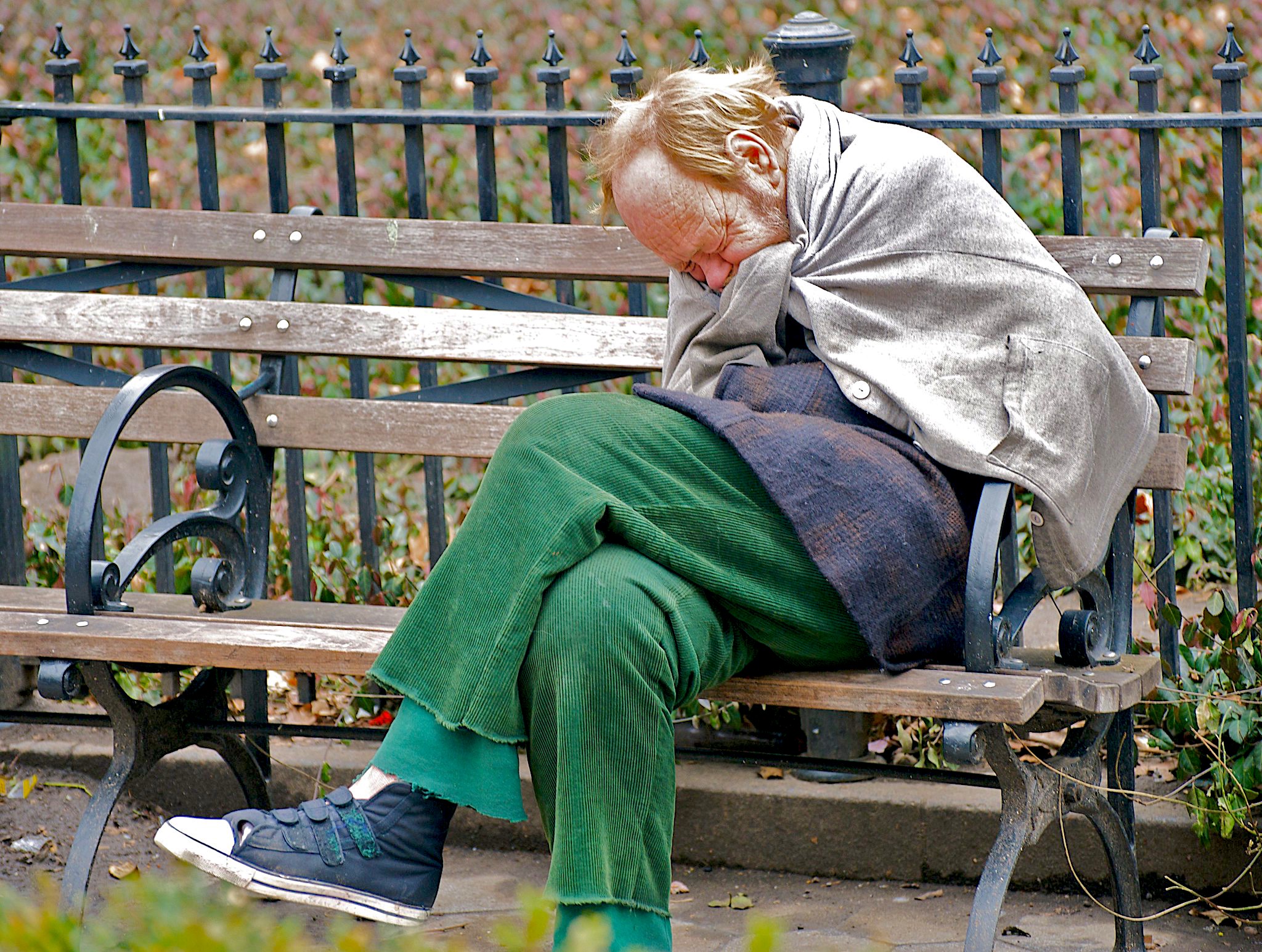 The U.S. government could easily give every American $2,000 a month for the foreseeable future, which would keep almost everybody in their homes and apartments. In fact, Canada has opted to give $2,000 a month to those who lost work because of the pandemic.

But ignore the fact that there’s enough money. That’s not what we’re here to discuss.

There are also enough empty homes. As of 2018, there were nearly 1.5 million vacant homes in the country. Compare that to the estimated 553,742 people homeless on any given night. So even before the pandemic, there were three empty houses for every homeless person. Three. That’s not even accounting for empty apartments, yachts, sheds, extra bedrooms, garages, condos, cubbyholes, attic spaces, basements, barns, pool houses, and walk-in refrigerators.

If those vacant locations were used to house the houseless, those of us lucky enough to have our own abodes wouldn’t hardly notice a difference except that homelessness would have vanished. It would be something we talk about in a “remember when” fashion like VHS tapes, game shows about grocery shopping, and dating that didn’t involve blood tests and an Instagram audit.

No more people on the street, no more fear that a little bad luck would result in you or your family under a bridge giving a guy your underwear in exchange for a sandwich. All that utter madness would cease to exist.

And the impending number of evictions—28 million—isn’t even accounting for how many people stay in horrible relationships because they can’t afford a place of their own, both horrible marriages and other living arrangements. (Like a 25 year-old who has to live with his mom who cleans her feet on the couch every night while watching Wheel of Fortune and eating soup that smells of rotting raccoon carcass. Call me crazy, but in our post-scarcity world, that 25 year-old should be given an apartment.) 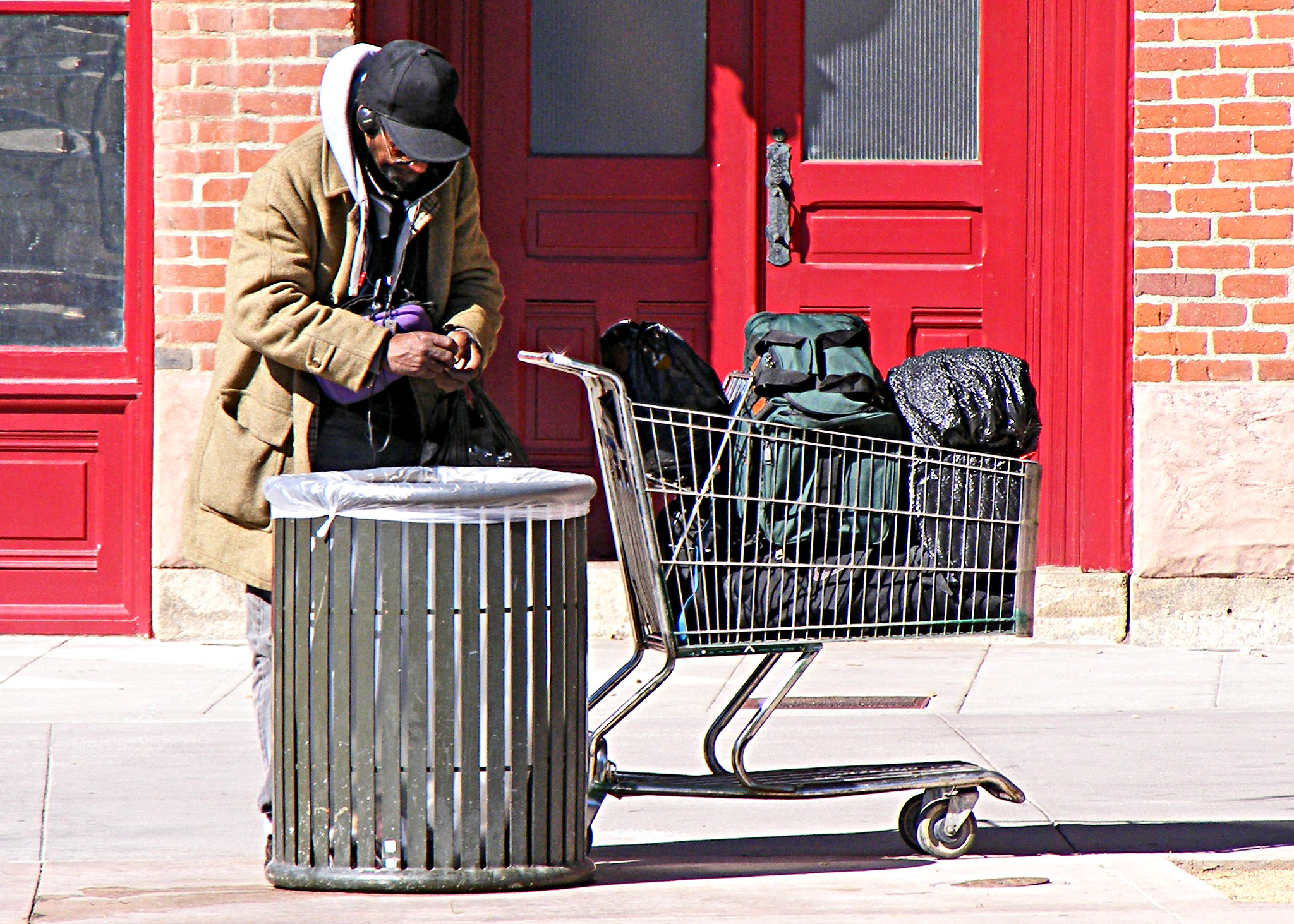 But let’s back up even further and question the brain parasites we were given from our social engineering. Why should someone be homeless just because they don’t have enough money? Some would say indignantly, “Because they didn’t work hard enough, so they deserve to be homeless. That’s called ‘work ethic’ – and it’s what this country’s founded on! George Washington something something Ford Motor Company. Meh!”

Okay, that’s a great point except—No, it’s not. How hard someone works doesn’t hardly matter in our society. Think for a moment about all the filthy rich trust-fund kids who sit around on their asses all day smoking weed out of the skull of an exotic lemur. Yet they’re still rich. How many trophy wives or trophy husbands lounge by the pool eternally caressing their junk in the sunshine? They don’t work hard. How many superfluous “board members” get paid hundreds of thousands to sit on a board and attend one conference call a month?

Plus, consider people that actually do work for their fortunes—like a CEO—do you honestly believe they work a thousand times harder than a janitor or a dishwasher or a coal miner? Of course not. What’s the hardest job in the world? Probably ripping asbestos out of a dilapidated sewage treatment plant in Phoenix, Arizona in 110-degree heat with improper safety equipment.

But very little of this discussion exists in our culture. Instead the banks and landlords are preparing to kick 28 million families out. And it’s not like the bank will resell all those homes during the impending depression lathered in pandemic. Nope. Those homes will sit empty, just like the 10 million foreclosed homes during the 2008 Great Recession sat empty for months if not years. So the reason for kicking people out is simply to… um… make sure they’re homeless? How can that make sense?

If the goal is to have a good, functioning society, it’s completely illogical to kick people out of their shelters. The families will be devastated. The kids will be traumatized. Divorces will occur. Suicides. Addiction. Overdoses. None of that is good for society. None of that helps America even slightly. So the truly patriotic thing to do is demand housing for all. 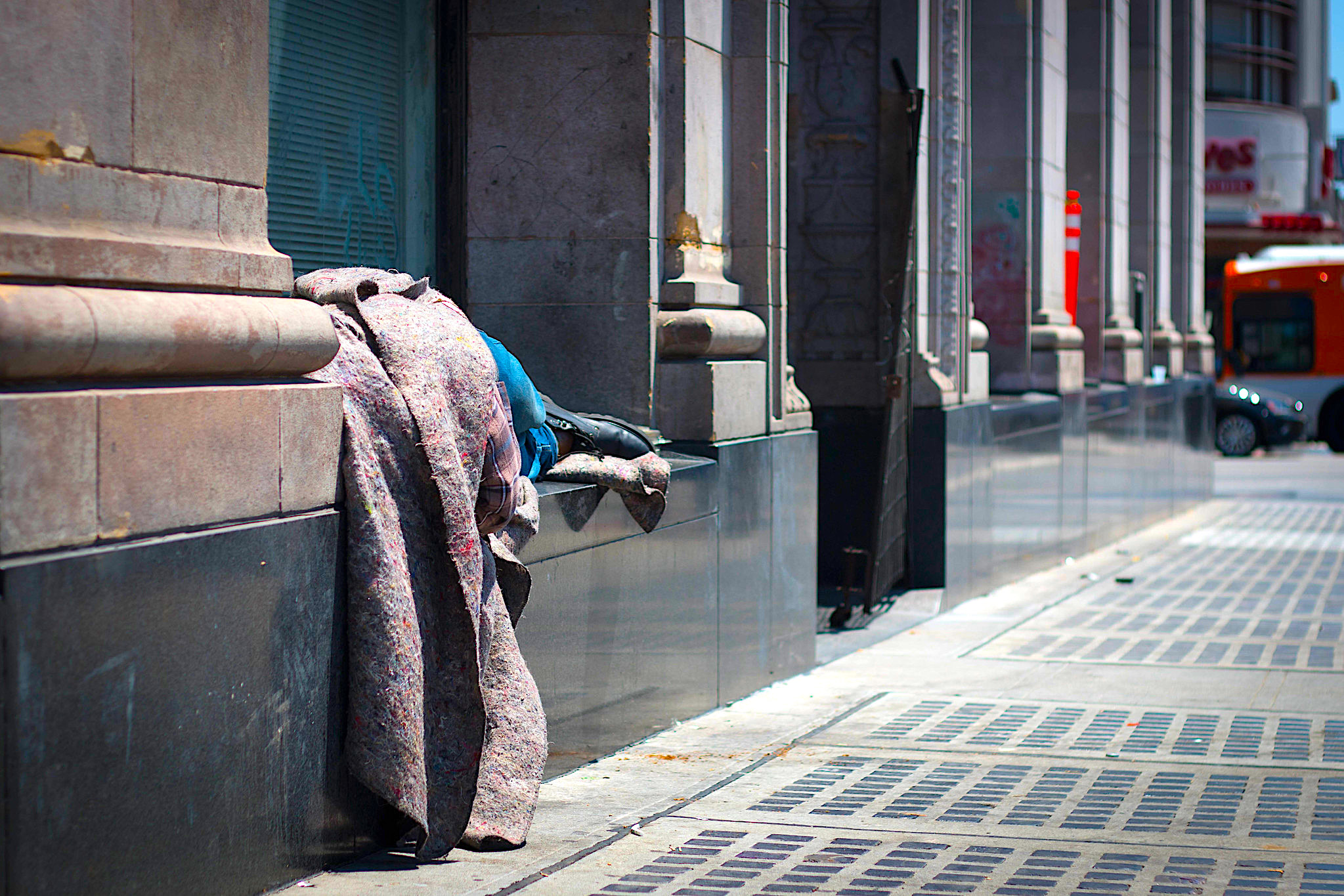 What’s good for society is to have people comfortable in their homes, able to get educated and grow as humans. What ever happened to the pursuit of human growth for every individual?

Some may argue, “We can’t let people stay in their homes because we need to teach them personal responsibility.” That’s the argument every vomit-brained Fox News guest spits out reflexively. Yet it’s impossible to be responsible for something no one saw coming. Did anyone see this pandemic coming? Did anyone including the government prepare for it?

No. In fact we’ve bailed out whole industries, the airline industry for one. Billions of dollars just handed to them. How are the heads of the airlines any different from a homeowner who lost her job in the pandemic? There’s no difference. Shouldn’t the airline CEOs be the ones evicted—left out on the street sleeping in a box?

On top of all this—and this point is really going to blow a hole through your pants—it’s cheaper to keep people in their homes. For example, according to The Washington Post, “Utah was spending on average $20,000 on each chronically homeless person. So, to in part cut those costs — but also to ‘save lives,’ …the state started setting up each chronically homeless person with his or her own house.”

It worked. By 2015, they cut homelessness by 91 percent and saved the state money. However, since then, homelessness has gone back up. It’s tough to say why, but one director of a Utah food pantry said, “The mistake we made was stopping [the program].”

Yeah, that may have been the reason. Utah lawmakers found out how to end homelessness…. and then they stopped doing that! (Why in this country do we run screaming from every great idea like it’s a hive of angry bees that all want to talk to us about life insurance??)

Even if we didn’t have enough homes, which we do, we can now 3D print a house in a matter of hours. (Although it must suck when the printer jams. All those houses stuck together in the tray.)

Point is, don’t tell me we don’t have enough houses and apartments for everyone. Paris Hilton’s dogs have a fucking $325,000 mansion! I’m not kidding. Just for the dogs. That’s, shall we say, mildly upsetting. (Let me guess – those dogs worked hard to get where they are.)

The next solution is to fight the impending evictions. Don’t let the authorities kick your friends and neighbors onto the street. We have a strong (suppressed) history in this country of fighting against landlords and the cruelty of evictions, such as the great Rent Strike War of 1932 in the Bronx, and the Chicago Eviction Riots of 1931.

Fighting back is not just an option, it’s an obligation. If you’re strong enough to resist the profit-centered social engineering we are fed every day of our lives, then you will soon realize housing should be a human right.

Lee Camp is the host of the hit comedy news show “Redacted Tonight.” His new book “Bullet Points and Punch Lines” is available at LeeCampBook.com and his stand-up comedy special can be streamed for free at LeeCampAmerican.com.