Britain’s Ministry of Justice is blocking the release of basic information about the judge who is to rule on Julian Assange’s extradition, reports Declassified UK.

Declassified UK has discovered that Julian Assange’s judge, Vanessa Baraitser, has ordered extradition in 96 percent of the cases she has presided over for which information is publicly available.

Baraitser was appointed a district judge in October 2011 based at the Chief Magistrate’s Office in London, after being admitted as a solicitor in 1994. Next to no other information is available about her in the public domain.

Baraitser has been criticised for a number of her judgments so far concerning Assange, who has been incarcerated in a maximum security prison, HMP Belmarsh in London, since April 2019. These decisions include refusing Assange’s request for emergency bail during the Covid-19 pandemic and making him sit behind a glass screen during the hearing, rather than with his lawyers.

Declassified recently revealed that Assange is one of just two of the 797 inmates in Belmarsh being held for violating bail conditions. Over 20 percent of inmates are held for murder.

Declassified has also seen evidence that the UK Home Office is blocking the release of information about Home Secretary Priti Patel’s role in the Assange extradition case.

A request under the Freedom of Information Act (FOIA) was sent by Declassified to the Ministry of Justice (MOJ) on February 28, 2020 requesting a list of all the cases on which Baraitser has ruled since she was appointed in 2011. The MOJ noted in response that it was obliged to send a reply within 20 working days.

Two months later, on April 29, 2020, an information officer at the HM Courts and Tribunals Service responded that it could “confirm” that it held “some of the information that you have requested”.

But the request was rejected since the officer claimed it was not consistent with the Constitutional Reform Act. “The judiciary is not a public body for the purposes of FOIA… and requests asking to disclose all the cases a named judge ruled on are therefore outside the scope of the FOIA,” the officer stated.

The officer added that the “information requested would in any event be exempt from disclosure… because it contains personal data about the cases ruled on by an individual judge”, and that “personal data can only be released if to do so would not contravene any of the data protection principles” in the Data Protection Act.

A British barrister, who wished to remain anonymous, but who is not involved with the Assange case, told Declassified: “The resistance to disclosure here is curious. A court is a public authority for the purposes of the Human Rights Act and a judge is an officer of the court. It is therefore more than surprising that the first refusal argued that, for the purposes of the FOIA, there is no public body here subject to disclosure.”

The barrister added: “The alternative argument on data doesn’t stack up. A court acts in public. There is no default anonymity of the names of cases, unless children are involved or other certain limited circumstances, nor the judges who rule on them. Justice has to be seen to be done.”

Despite the HM Courts and Tribunals Service invoking a data protection clause, Declassified was able to view a host of cases with full names and details in Westlaw, a paid-for legal database. The press has also reported on a number of extradition cases involving Baraitser.

An internal review into the rejection of Declassified’s freedom of information (FOI) request upheld the rejection. 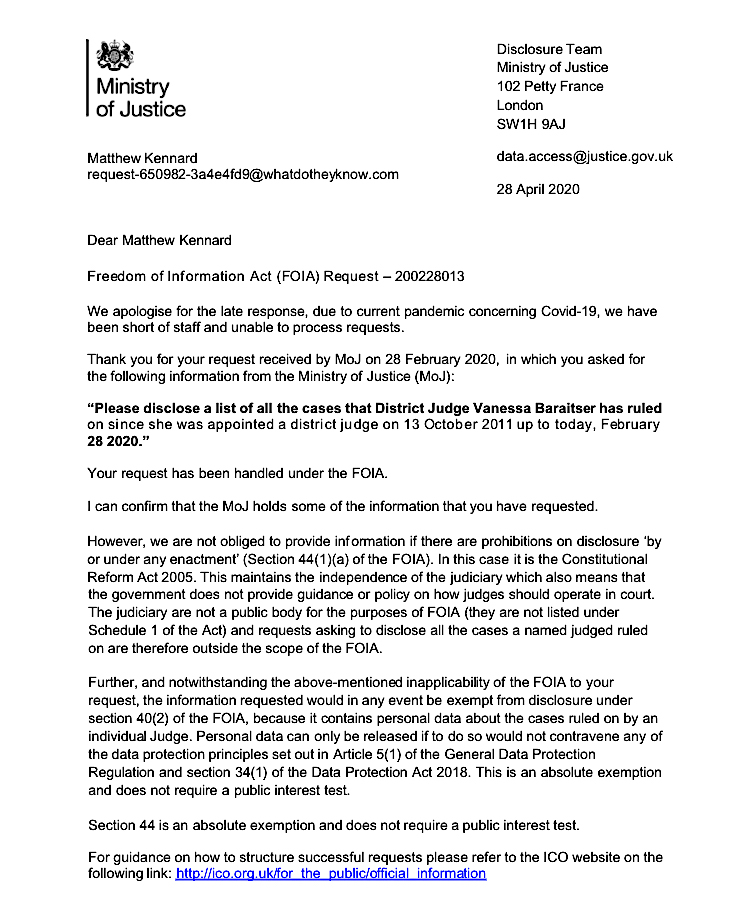 On April 10, 2020 Declassified sent an identical information request to the MOJ asking for a case list for a different district judge, Justin Barron, who was appointed on the same day as Baraitser in October 2011.

This request was answered by the MOJ swiftly, within 17 days, compared to two months with Baraitser. The information officer also noted that it “holds all the information you have requested” rather than “some” in the case of Baraitser. It is unclear why the HM Courts and Tribunals Service would hold only partial information on Baraitser, but not on Barron.

Declassified clarified that it wanted the list to include “the date, the defendant, the charge and the judge’s decision”.

The officer eventually declined the request, stating that it “would exceed the cost limit set out in the FOIA”, but adding: “Although we cannot answer your request at the moment, we may be able to answer a refined request within the cost limit.”

With Baraitser’s identical records, the possibility of refining the search was never offered – two “absolute” exemptions being applied to the request from the start.

Despite the rejection by the MOJ, Declassified has found 24 extradition cases that Baraitser ruled on from November 2015 to May 2019, discovered using the media archive Factiva and Westlaw. Of these 24 cases, Baraitser ordered the extradition of 23 of the defendants, a 96 percent extradition record from publicly available evidence.

Baraitser has ordered the extradition of defendants to at least 11 countries in this period, including one person to the U.S. Six of the extraditions, or 26 percent of the rulings, were successfully appealed.

In one case, Baraitser’s decision to extradite was overturned because the appeal judge “attached considerable weight to the likely impact of extradition upon the health and wellbeing of the defendant’s wife”, who “will be left with very little support”.

Recently, Baraitser controversially refused to guarantee anonymity to Assange’s partner, Stella Moris, which led her to publicly reveal her relationship with Assange and their two children.

The appointment of Baraitser to preside over the Assange case remains controversial and the decision untransparent. It is likely that Chief Magistrate Lady Emma Arbuthnot was involved in the decision to appoint Baraitser to the case.

The chief magistrate has a “leadership responsibility” for the roughly 300 district and deputy judges across England and Wales. Arbuthnot hears “many of the most sensitive or complex cases in the magistrates’ courts and in particular extradition and special jurisdiction cases”.

Arbuthnot’s role also includes “supporting and guiding” district judges such as Baraitser and “liaising with the senior judiciary and presiding judges” on the cases they are ruling on.

But Arbuthnot’s role in the Assange case is mired in controversy and conflicts of interest due to her family’s connections to the British military and intelligence establishment, as Declassified has previously revealed. Arbuthnot has personally received financial benefits from partner organisations of the UK Foreign Office, which in 2018 called Assange a “miserable little worm”.

Arbuthnot directly ruled on the Assange case in 2018-19 and has never formally recused herself from it. According to a statement given to Private Eye, she stepped aside because of a “perception of bias”, but it was not elucidated what this related to.

Since Arbuthnot has not formally recused herself, Assange’s defence team cannot revisit her rulings while it also could have left open the possibility of her choosing which of her junior judges was to preside over the Assange case.

In a key judgment in February 2018, Arbuthnot rejected the findings of the United Nations Working Group on Arbitrary Detention – a body composed of international legal experts – that Assange was being “arbitrarily detained”, characterised Assange’s stay in the embassy as “voluntary” and concluded Assange’s health and mental state was of minor importance.

In May 2019, soon after Assange was seized from his asylum in the Ecuadorian embassy by British police, the U.S. government requested his extradition on charges that could see him imprisoned for 175 years.

Declassified also made a request under the Freedom of Information Act for a list of all the cases heard at Woolwich Crown Court, near Belmarsh, for 2019. Baraitser had controversially moved Assange’s hearing to Woolwich — which is often used for terrorism cases — before the Covid-19 pandemic hit. It has now been moved back to the Old Bailey, the central criminal court of England and Wales.

This request, sent on March 31, 2020, was again rejected. The MOJ officer stated: “I can confirm that the MOJ holds the information that you have requested. All of the information is exempt from disclosure under section 32 of the FOIA because it is held in a court record.”

It added that: “Section 32 is an absolute exemption and there is no duty to consider the public interest in disclosure.”

Despite daily lists of the cases heard at Woolwich being freely available online, including names of defendants, an internal review conducted at Declassified’s request reached the same conclusion.

On May 15, 2020, Declassified sent a further FOI request, this time to the Home Office, asking for information on any phone calls or emails made or received by the current Home Secretary Priti Patel concerning the Assange case.

The Home Office replied: “We neither confirm nor deny whether we hold any information, within the scope of your request.” It added that the reason was “to protect personal data”.

But, in January 2020, Declassified had requested the same information for the period when Sajid Javid was home secretary, April 2018 – July 2019. In this case, the Home Office responded: “We have carried out a thorough search and we have established that the Home Office does not hold the information that you have requested.”

The responses from the Home Office appear to indicate that Patel has had communications regarding Assange during her tenure as home secretary, but that the government is reluctant to disclose this information. The Assange case continues to set a legal precedent in being mired in opacity and conflicts of interest.

Patel — who is also linked to Arbuthnot’s husband, Lord Arbuthnot — will sign off Assange’s extradition to the U.S. if it is ordered by Baraitser.

← COVID-19: Poverty Weaponized By Elite as US Eviction Crisis Looms
UPRISING: Militias’ Warning of Excessive Federal Power Comes True – But Where Are They? →