The U.S. military has for years been using mass media to inflame public interest in alleged  UFOs, and it’s entirely possible it is a domestic ploy to get more Space Force funding, writes Caitlin Johnstone. 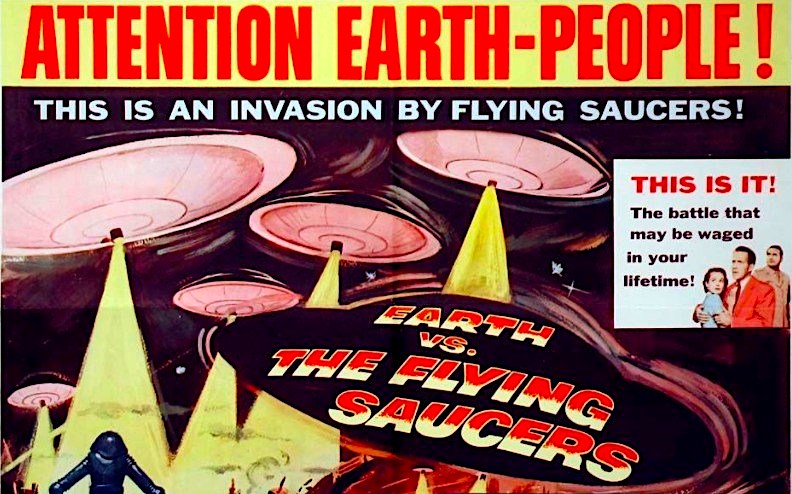 “No Longer in Shadows, Pentagon’s U.F.O. Unit Will Make Some Findings Public” reads a New York Times headline that is understandably attracting a great deal of attention today.

True to form, the Times had to hastily issue an embarrassing correction to the article after initially reporting that former Senate majority leader Harry Reid “believed that crashes of vehicles from other worlds had occurred and that retrieved materials had been studied secretly for decades”, when in fact Reid merely believes “crashes of objects of unknown origin may have occurred”.

If I was the New York Times quoting the former Senate majority leader on the record as confirming the government has been studying the debris of crashed UFOs for decades, I would simply confirm that he actually said that before publishing it. https://t.co/3PHy4pUY0R pic.twitter.com/WYYNTLHX3v

Still though, it’s understandable that this article has captured public fascination. It reports that a Pentagon unit dedicated to the study of UFOs will begin making some of its investigations public, with the most attention-grabbing quotes coming from a former Pentagon consultant (emphasis mine):

Eric W. Davis, an astrophysicist who worked as a subcontractor and then a consultant for the Pentagon U.F.O. program since 2007, said that, in some cases, examination of the materials had so far failed to determine their source and led him to conclude, “We couldn’t make it ourselves.”

The constraints on discussing classified programs — and the ambiguity of information cited in unclassified slides from the briefings — have put officials who have studied U.F.O.s in the position of stating their views without presenting any hard evidence.

Mr. Davis, who now works for Aerospace Corporation, a defense contractor, said he gave a classified briefing to a Defense Department agency as recently as March about retrievals from “off-world vehicles not made on this earth.”

Of course, whenever you see an article reporting anything about the U.S. war machine in The New York Times, your response should always be intense skepticism.

They seem to be priming the public for something with this alien and UFO rollout. Why now?

A potentially more revealing quote in this Times article than what was said by Mr Davis was provided by Senator Marco Rubio (again, emphasis mine):

Senator Marco Rubio, the Florida Republican who is the acting chairman of the Senate Select Committee on Intelligence, told a CBS affiliate in Miami this month that he was primarily concerned about reports of unidentified aircraft over American military bases — and that it was in the government’s interest to find out who was responsible.

He expressed concerns that China or Russia or some other adversary had made “some technological leap” that “allows them to conduct this sort of activity.”

So the New York Times article offers us two possibilities for these UFO phenomena:

Option #1 makes little sense. Why would a species so advanced that it has mastered interstellar travel have any interest in human governments and their military forces?

Option #2 reminds one of the bogus “missile gap” narrative that JFK dishonestly sold the American public about the Soviets holding military superiority over the U.S. in their nuclear arsenal. And anyway if a foreign government has this military technology, why didn’t they use it to become the top military superpower years ago?

Completely unexamined by the Times, to nobody’s surprise, is a third possibility: that the U.S. war machine is lying.

The U.S. Space Force has accused Russia of testing an anti-satellite weapon from one of its satellites in orbit — marking the first time the military has publicly charged Moscow with carrying out a space-based weapons test.https://t.co/2boUGY2y4N

As the U.S.-centralized empire continues its campaign to militarize space, new conflicts are emerging with unabsorbed governments along that front, like the recent accusation against Russia by the U.S. Space Force of testing a new anti-satellite weapon in space.

“In a sign outer space could be turning into a theater of war for terrestrial adversaries, it marked the first time the U.S. military has publicly charged Moscow with carrying out a space-based weapons test,” NPR reports.

It is likely that the U.S. power alliance is preparing for such conflicts to increase in frequency and intensity in the coming years, and, as we discussed recently, winning disputes related to international law requires a robust international propaganda campaign. The U.S. military has for years been using the mass media to inflame public interest in alleged military information about UFOs, and it’s entirely possible that it has been doing that for this purpose. It could also easily be a domestic ploy to get more Space Force funding.

As the U.S. moves further and further into a steadily escalating new cold war against both Russia and China, we should remind ourselves that there was a UFO panic during the last cold war. In a 2002 article titled “Cold War hysteria sparked UFO obsession, study finds”, The Guardian reports the following:

But Clarke and Roberts, whose research is to be published this week in a book called Out of the Shadows , did uncover evidence that the American Secret Service, with the possible connivance of the British, looked at ways of using the public panic over UFOs as a psychological weapon against the Russians.

In CIA memos marked ‘secret’ and seen by The Observer, top officials consider exploiting the UFO craze. ‘I suggest that we discuss the possible offensive or defensive utilisation of these phenomena for psychological warfare purposes,’ wrote CIA director Walter Smith in 1952.

‘Shortly after that meeting the CIA sent a delegation to Britain to discuss UFOs. It is hard to imagine that they did not discuss the psychological warfare aspects of it with their British counterparts,’ Clarke said.

So just from the few glimpses we’ve been granted about this thing from behind the veil of government secrecy, we know for a fact that U.S. government agencies are all too happy to use public fixation on UFOs for the purposes of psychological warfare.

International law only exists to the extent that the international community is willing to enforce it. International narrative manipulation manufactures this willingness.https://t.co/X4KGtQH4ap

It’s probably also worth noting that the U.S. military was researching the use of “flying saucers” in the 1950s. In an article titled “U.S. military’s plans for flying saucers explained in declassified documents”, The Guardian‘s Adam Gabbatt reported the following in 2012:

The U.S. air force contracted the work to a now-defunct Canadian company, Avro. In one document, Avro envisaged a “top speed potential between Mach 3 and Mach 4, a ceiling of over 100,000ft and a maximum range with allowances of about 1,000 nautical miles”. That would have sent the flying saucer spinning into the Earth’s stratosphere.

Language in a report labelled “final development summary” was optimistic: “It is concluded that the stabilization and control of the aircraft in the manner proposed – the propulsive jets are used to control the aircraft – is feasible and the aircraft can be designed to have satisfactory handling through the whole flight range from ground cushion take-off to supersonic flight at very high altitude.”

We are told that “the project was cancelled and the craft were never built”, but again, this is the U.S. military we are talking about. It’s entirely possible that if the technology we’re being told to worry about does indeed exist, it is not just terrestrial in origin, but American.

It is very telling that despite the new prevalence of video recording equipment in the pockets of the rank-and-file public around the world, we have not been experiencing a huge increase in footage of UFOs and close encounters of the third kind, yet reports in the mass media of UFO involvement with military personnel have only been increasing. This fact by itself should give you very strong doubts about visitations from ET.

I don’t know about you, but I find it a lot more likely that the U.S. war machine is lying to us once again to advance yet another pre-planned military agenda than that an extremely advanced species flew across the galaxy to stare at a bunch of terrestrial military bases.

Anyway that’s all I’ve got for now. The more the U.S. war machine and its media stenographers tell us we should pay attention to this UFO thing, the more skeptical we should become. Eyes wide, earthlings.