Diana Vynohradova’s webinar appearance shows the mainstreaming of neo-Nazism in Ukrainian politics and the tolerance for pro-NATO fascists in Washington, Moss Robeson reports. 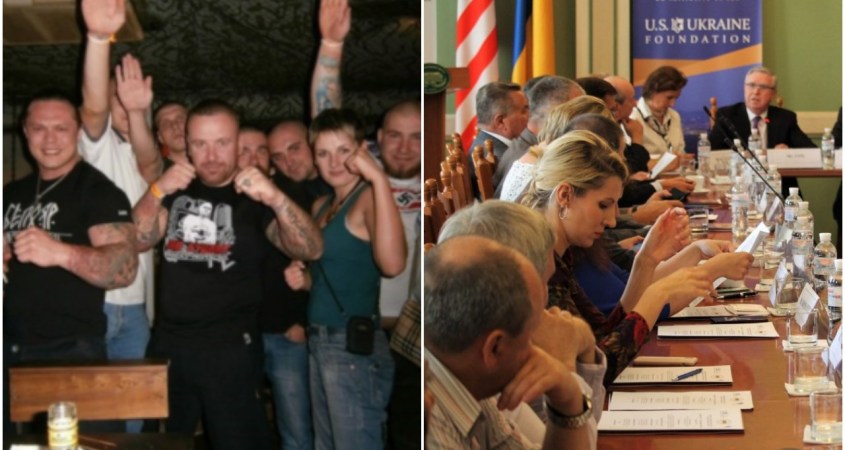 By Moss Robeson
The Grayzone

The influential Washington-based U.S.-Ukraine Foundation (USUF) hosted a webinar on July 15 about a documentary about Vasyl Slipak, a famed Ukrainian opera singer who died in 2016 fighting alongside the ultranationalist Right Sector’s “Volunteer Ukrainian Corps” (DUK) in eastern Ukraine.

The webinar featured an appearance by Diana Vynohradova (Kamlyuk), a sieg-heiling neo-Nazi decorated with white supremacist tattoos. Vynohradova was convicted of participating in a notorious racist murder and has incited hatred against Jews, denigrating them as “kikes.” 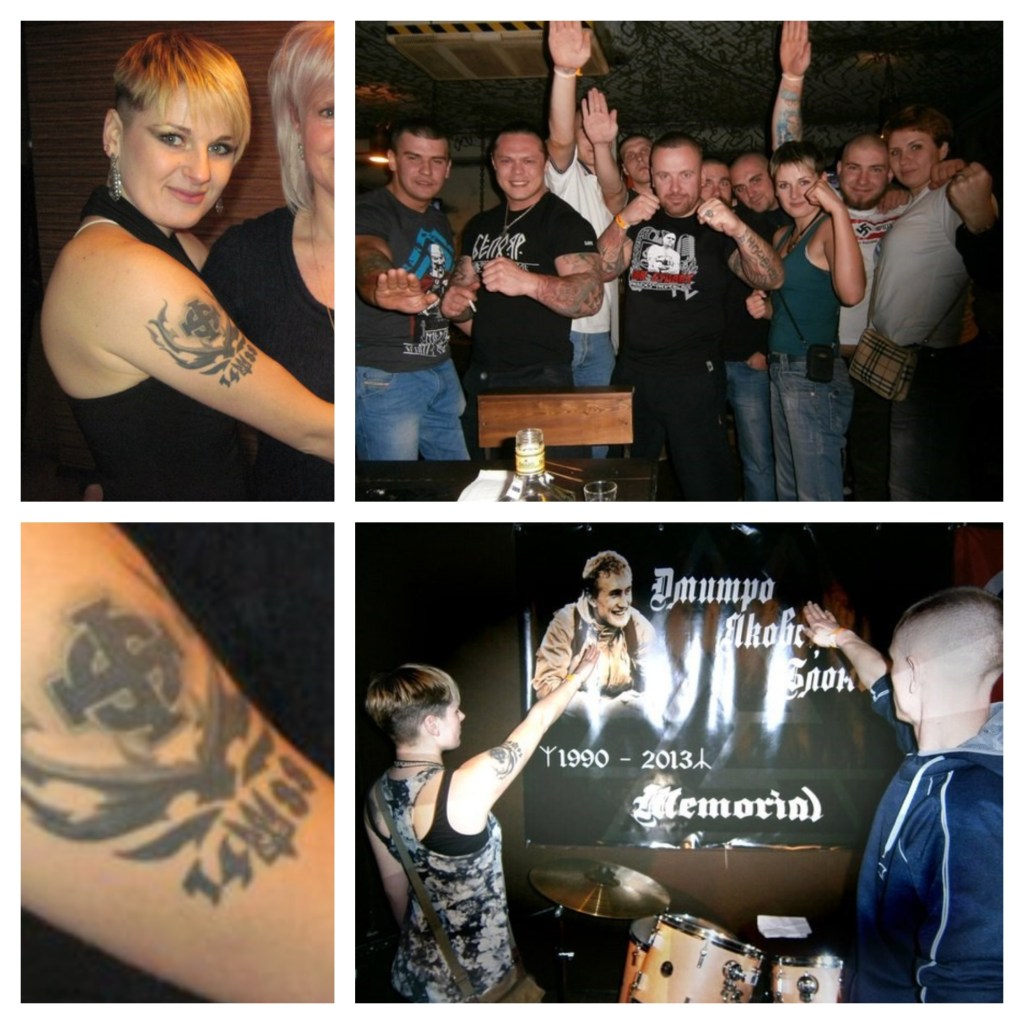 Diana Vynohradova: On the bottom-left, her 1488 and Celtic Cross tattoos are visible. On the top-right, she is standing next to neo-Nazi band leader Arseniy “Bilodub” Klimachev.

With her presence in the webinar, Vynohradova provided a shocking example of the mainstreaming of neo-Nazism in Ukrainian politics, and the tolerance for pro-NATO fascists in Washington. The USUF, which provided her with the stamp of approval, is a leading think tank of the Ukrainian diaspora with ties to the U.S. State Department and anti-Russian foreign policy advisers in both parties.

Through its Friends Of Ukraine Network (FOUN), the USUF has recruited some of the most hardline anti-Russia foreign policy hands in the Beltway. The Canary UK reported last year that the USUF and FOUN are “pushing a frightening escalation of the armed conflict in Ukraine” through their annual policy recommendations to the U.S. government, and that the FOUN has described itself as “the largest, highest level and most politically diverse group of Americans to call for arming Ukraine with American weapons.”

The USUF’s influence within the State Department was apparent during a December 2013 event where then-Assistant Secretary of State Victoria Nuland boasted about the U.S. government investing $5 billion in post-Soviet Ukraine to “promote civic participation and good governance.”

Though it describes itself as a “do tank,” the USUF did not respond to a request for comment on its hosting of a Ukrainian neo-Nazi involved in racist violence.

Diana Vynohradova, at right, speaks to the USUF webinar from a crypto-Nazi youth camp.

Shortly before the USUF panel, a Ukrainian journalist was forced to flee Kyiv after co-authoring a report detailing a Ukrainian media outlet’s myriad ties to neo-Nazis, including Vynohradova.

On July 3, five days before the USUF announced its webinar featuring Vynohradova, a respected Ukrainian journalism site called Zaborona published an exposé of StopFake, a propagandistic “fact-checking” organization funded by the U.K. Foreign Office and several EU member states. The article dedicated over a paragraph to Diana Vynohradova, noting her close relationship with one of the main faces of StopFake, Marko Suprun.

Zaborona reported that Vynohradova was convicted in the early 2000s for her participation in the racist murder of a Nigerian citizen. “I don’t like Negroes,” her friend replied when asked why he stabbed the Nigerian to death.

While in prison, Vynohradova wrote poems for the notorious neo-Nazi band Sokyra Peruna. During the 2013-14 “Revolution of Dignity,” she advised protesters from the main stage on Kyiv’s Independence Square “not to give in to supplications from the kikes.”

In the past, Vynohradova wore a neo-Nazi “1488” tattoo on her right arm, but she has since covered it up. She has not bothered to hide the white supremacist Celtic Cross above it, however, and continues to sport a kolovrat necklace — a Slavic pagan symbol that resembles a swastika.

Just days before the USUF panel, Zaborona Editor-in-Chief Katerina Sergatskova fled Kyiv with her family after being doxxed by Ukrainian nationalists. 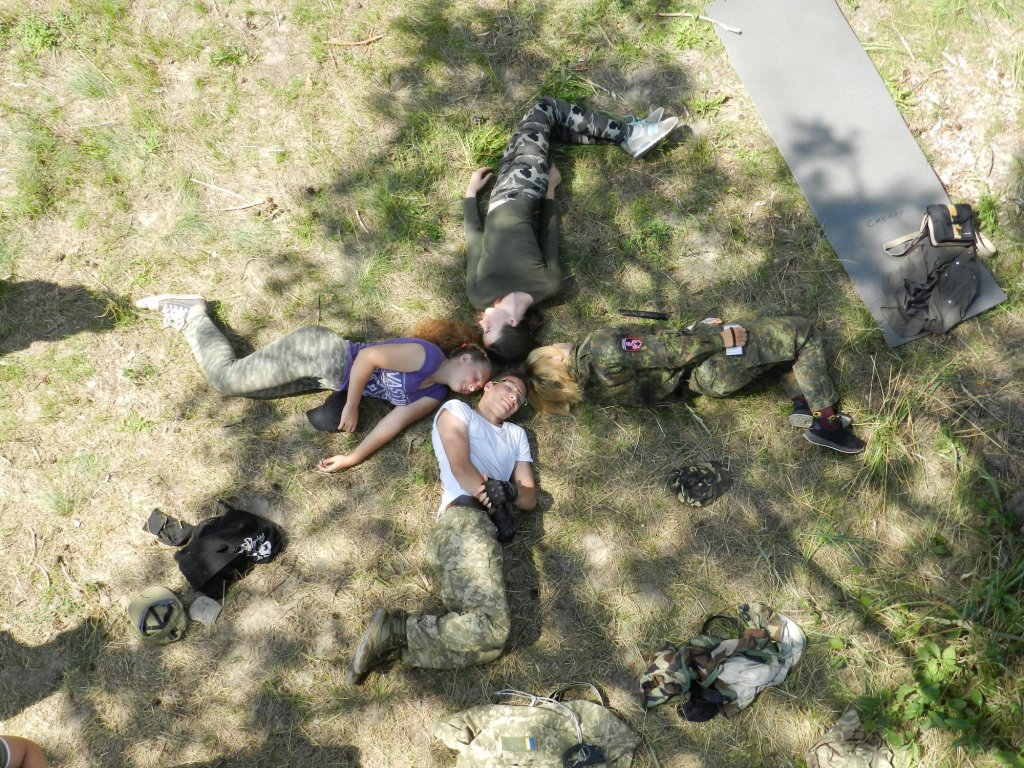 “Kommandos” pretending to sleep in the shape of a swastika. The girl on the left is wearing a SvaStone t-shirt.

During the USUF panel, Vynohradova was introduced by the moderator, retired Ukrainian Major General Volodymyr Havrylov, as a spokesperson for the … erm … Right Sector. Wherever she is, the general stated, Vynohradova is “doing something useful for the country, as always.”

Vynohradova opened her remarks by praising Vasyl Slipak. “I think he was a person [on] some kind of sacred mission,” she said of the ultra-nationalist martyr. “He had some superior force, as if other-worldly. Vasyl, for me, is a model that I bring up for children as we raise them.”

Later, Vynohradova panned her smartphone lens to a group of teenage Ukrainian nationalists gathered on a field and bearing a Right Sector flag.

“We [Right Sector] are doing youth camp here, of young patriots, the club named Kommandos,” the neo-Nazi explained. They promised to avenge the death of Slipak, calling him “this Great Knight of Ukraine.”

The “Kommandos” is a crypto-Nazi “military-patriotic” youth camp with attendees as young as 10 years old. Vynohradova is its lead instructor. The campers’ T-shirts are produced by a white supremacist clothing brand, SvaStone, founded by Arseniy “Bilodub” Klimachev, the frontman of Sokyra Peruna and a leader of Right Sector.

Another Kommandos supporter is Anatoly Shponarsky, an MMA fighter with the neo-Nazi “14 words” tattooed on his stomach who provided the camp with “sports equipment.” The above photo of nationalist youth pretending to sleep in the shape of a swastika was uploaded to the camp’s official Facebook page last summer.

Besides serving as an organizer of “Right Youth” summer camps, Vynohradova has been involved in all three wings of the fascist Right Sector’s “national liberation movement,” as a spokesperson for the Right Sector’s Volunteer Ukrainian Corps (DUK), and as a member of the party’s leadership.

Havrylov, the moderator of the USUF panel, was the former military attache at the U.S. embassy. Markian Bilynskyj, the USUF’s vice president for field operations and director in Ukraine, facilitated the discussion, and presumably was responsible for inviting the neo-Nazi Vynohradova.

Oksana Koliada, the former minister of veterans affairs in Ukraine (2019-20), was originally scheduled to participate in the webinar. With her help, according to journalist Oleksiy Kuzmenko, the Veterans Affairs Ministry was “hijacked” by the “Veterans Movement of Ukraine” (VMU), which the neo-Nazi Azov movement co-founded. Soon after her appointment, Koliada attended a concert organized by the VMU and headlined by Sokyra Peruna.

“Vasyl was radical in everything,” Gudziak recalled.

“For some, you know, who see a picture or two or a clip or two, you might say, boy, he was some extreme nationalist,” said Gudziak. He didn’t deny this perception, but insisted that the truth was more complicated. “I think he was motivated by injustice … seeing Ukrainians, people of his blood, people of his nation, being harmed and killed … and he acted in a reflex.”

According to the archbishop, Slipak should serve as an example for Ukrainians, “to take us out of our complacency, out of our bourgeois complaining … [and to] share what you have, give what you can. Maybe give your life itself. I think Vasyl Slipak will be speaking in this manner to all who will come to know his story.” Gudziak remained quiet for the rest of the webinar.

A documentary about Slipak screened at the start of the webinar. Entitled “Myth,” the film featured an animation based on Slipak’s last words: “I will dissolve [into Ukraine] and live forever.”

As a pool of blood spread into the shape of Ukraine, the slogan invoked Nazi concepts of blood and soil.

A 25-year-old Ukrainian legislator, Yana Zinkevych, joined the panel later on to emphasize the need to incorporate Vasyl Slipak’s story into the education of Ukrainian youth, and even high school textbooks, as an “example of sacrifice.”

The USUF’s Markian Bilynskyj agreed, declaring, “it goes back to what Archbishop Gudziak was saying,” that Slipak’s death should inspire others to encourage “more selfless involvement in society.”

Zinkevych was elected to Ukraine’s parliament last summer as a member of the former president Petro Poroshenko’s “European Solidarity” party. She also served as commander of the “Hospitallers,” a medical battalion of the “Ukrainian Volunteer Army” led by Dmytro Yarosh, the founder and ex-leader of the far-right Right Sector.

Zinkevych and the Hospitallers were previously part of the DUK when Yarosh commanded the Right Sector. Dmytro Yarosh issued an ominous warning to the liberal Ukrainian president Volodymyr Zelenskiy last year, promising that he would be lynched if he “betrays” his country.

While serving as a high level member of Poroshenko’s ostensibly center-right party, Zinkevych has continued to associate with extremists in groups like Right Sector.

The far-right outfit Right Sector endorses the 20th century Ukrainian fascist concept of “Natiocracy,” which holds that Ukraine should be governed by a nationalist dictatorship. After the 2019 presidential election, it issued a statement suggesting the necessity of acting “outside of formal democratic procedures” in conjunction with allied “armed formations” to safeguard Ukraine’s independence. Even the NGO Freedom House, a U.S. government-funded outfit that supports regime change operations abroad, has described Right Sector as “extremist.”

John Herbst, director of the Atlantic Council’s Eurasia Center who chairs the FOUN’s National Security Task Force, has done his best to downplay the influence of Right Sector. In a 2018 Newsweekinterview, he claimed that “Pravy Sektor was a real force years ago, but even then a limited force that Russia exaggerated, so that’s an old Kremlin propaganda piece…”

Anders Åslund, a senior fellow at the Atlantic Council and vice-chair of FOUN’s Economic Security Task Force, took the denial of Right Sector’s street muscle a step further in 2015, declaring it a fantasy “which Russian propaganda had created.”

If the “Friends of Ukraine,” nestled in top Beltway think tanks, truly believe that Right Sector is just a figment of “Kremlin propaganda,” they must not have watched the white supremacists starring in the latest webinar sponsored under their watch – or the film that screened before it began.

Below is a scene from “Myth,” the documentary on Vasyl Slipak that screened during the USUF webinar. Slipak can be seen standing on the far-right with his DUK unit. On the left, a Nazi “SS” symbol is visible on the wall.

Moss Robeson is an independent researcher reporting on the international OUN-B Banderite network and its lobby in the U.S.