In a series of truly chilling and ominous tweets, Joe Biden shows us he would dispense with Trump’s even minimal non-interventionism and return the U.S. to full-bore aggression, warns Caitlin Johnstone. 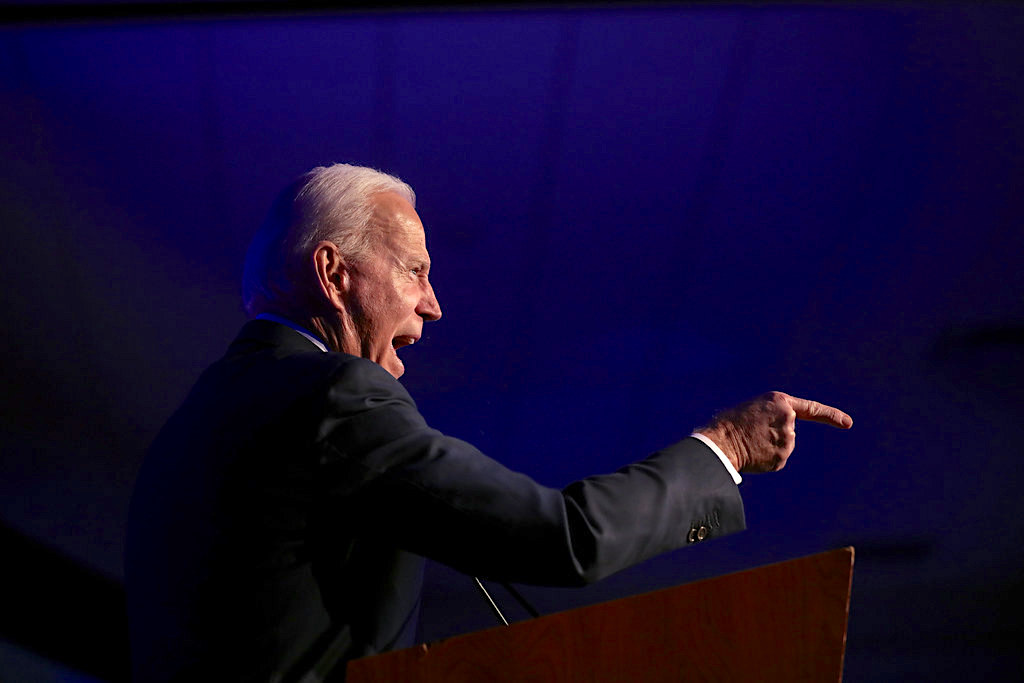 Joe Biden keeps trying to out-warmonger Donald Trump, and by Joe Biden I of course mean the team of handlers who are animating the dementia-ravaged corpse of the Biden campaign like a ventriloquist operating a wooden dummy.

In response to Trump suggesting an openness to scaling back his administration’s murderous Venezuela policy and meeting with President Nicolás Maduro, whoever runs Biden’s Twitter account for him seized upon the moment to assert that the former vice president will be doing no such thing if elected commander-in-chief.

“Trump talks tough on Venezuela, but admires thugs and dictators like Nicolas Maduro,” tweeted Biden Incorporated. “As President, I will stand with the Venezuelan people and for democracy.”

“Translation: if Trump retreats from his current policy of trying to sanction and suffocate Venezuelan into submission, Biden will make sure to revive it,” journalist Aaron Maté said in response.

“To be clear, Joe Biden is now attacking Donald Trump from the right on Venezuela,” said journalist Walker Bragman.

Trump talks tough on Venezuela, but admires thugs and dictators like Nicolas Maduro.

As President, I will stand with the Venezuelan people and for democracy. https://t.co/eUt28UxyXS

As FAIR.org’s Alan MacLeod accurately observed last year, this phrase “the Venezuelan people” is only ever invoked by the political/media class of the U.S.-centralized empire for sloganeering purposes in support of U.S.-led regime change interventionism in that nation, despite an overwhelming majority of Venezuelans opposing all U.S. interventionism including sanctions.

This tactic of attacking Donald Trump for being insufficiently warlike is nothing new for Biden Inc, nor is it limited to Venezuela.

During the primary debates Biden attacked Trump for being insufficiently hawkish toward North Korea, claiming the president was wrong to meet with Kim Jong Un because it gives the leader “legitimacy”, whatever that means.

An April Biden campaign ad accused the president of being too soft on China by failing to force Beijing to allow U.S. government officials into Wuhan to monitor the governing of a sovereign nation during a pandemic outbreak.

“Trump praised the Chinese 15 times in January and February as the coronavirus spread across the world,” says the ad’s narrator in an ominous voice. “Trump never got a CDC team on the ground in China. And the travel ban he brags about? Trump let in 40,000 travelers from China into America after he signed it. Not exactly airtight.”

I wouldn’t meet with Kim Jong Un without pre-conditions. By meeting with him, Donald Trump gave Kim Jong Un what he was looking for: legitimacy. I will work closely with our allies and hold China accountable for its lack of pressure on the Kim regime’s bad behavior. #DemDebate

Biden has attacked Trump’s partial troop withdrawal from Syria, using talking points from the so-called war on terror to absurdly claim during a primary debate that the president is putting America at risk of a terrorist strike from ISIS.

“We have ISIS that’s going to come here,” Biden said. “They are going to damage the United States of America. That’s why we got involved in the first place.”

And of course Biden & Co have been attacking Trump for being too soft on Russia, despite this administration’s many, many dangerously hawkish new cold war escalations against Moscow.

“We need a President who will stand up to the Kremlin, push back against Putin, and take immediate steps to ensure the security of our elections,” Biden’s Twitter account said last year.

This line of attack is so ubiquitous in the Biden campaign that it sometimes just takes the form of a vague, general swipe at Trump’s unwillingness to be more warlike, with an April tweet reading simply “Donald Trump says he’s a wartime president — it’s time for him to act like one.”

Donald Trump says he’s a wartime president — it’s time for him to act like one.

Again, this is Donald Trump these people are talking about. The same president who imprisoned Julian Assange for exposing U.S. war crimes, killed tens of thousands of Venezuelans with starvation sanctions, vetoed attempts to save Yemen from U.S.-backed genocide, is working to foment civil war in Iran using starvation sanctions and CIA ops with the stated goal of effecting regime change, nearly started a full-scale war with Iran by assassinating its top general, occupied Syrian oil fields and implemented devastating sanctions with the goal of preventing Syria’s reconstruction, greatly increased the number of troops in the Middle East and elsewhere, greatly increased the number of bombs dropped per day from the previous administration, killing record numbers of civilians, and reduced military accountability for those airstrikes.

America is a war machine on top of a police state on top of a mass media psyop. Only people who are willing to keep these psychopathic mechanisms in place are permitted to ascend to presidential candidacy. While all the news cameras focus on the relatively minor differences between presidents and presidential candidates, you can learn a lot more about America and what drives it by looking at their similarities.

Caitlin Johnstone is a rogue journalist, poet, and utopia prepper who publishes regularly at Medium.  Her work is entirely reader-supported, so if you enjoyed this piece please consider sharing it around, liking her on Facebook, following her antics on Twitter, checking out her podcast on either Youtube, soundcloud, Apple podcasts or Spotify, following her on Steemit, throwing some money into her tip jar on Patreon or Paypal, purchasing some of her sweet merchandise, buying her books “Rogue Nation: Psychonautical Adventures With Caitlin Johnstone” and “Woke: A Field Guide for Utopia Preppers.”

← PATRICK LAWRENCE: Iranian Tankers & the Age of Interdiction
UPRISING: Is This the Broadest Popular Movement in US History? →

61 comments for “Biden And His Ventriloquists Keep Out-Hawking Trump”