Africa has so far been sparred the worst of the coronavirus, but trouble is ahead if measures aren’t taken, says the WHO.

The Coronavirus pandemic wreaking devastation around the world has for the most part hit the global North the hardest.

The top seven nations in infections are north of the equator.  Four of them are permanent members of the UN Security Council. The fifth, China, where the pandemic began, has fallen to eleventh place.

In the southern hemisphere, Brazil has suffered the most, with 127,655 cases (ninth in the world) and 8,609 deaths, the sixth most globally. That shouldn’t be surprising given that its right-wing extremist president, Jair Bolsonaro, has ridiculed the disease as nothing but a flu. His irresponsibility is costing his people dearly.

Australia has had 6,896 cases and 97 deaths and next weeks is reopening the country.

Africa on the Brink 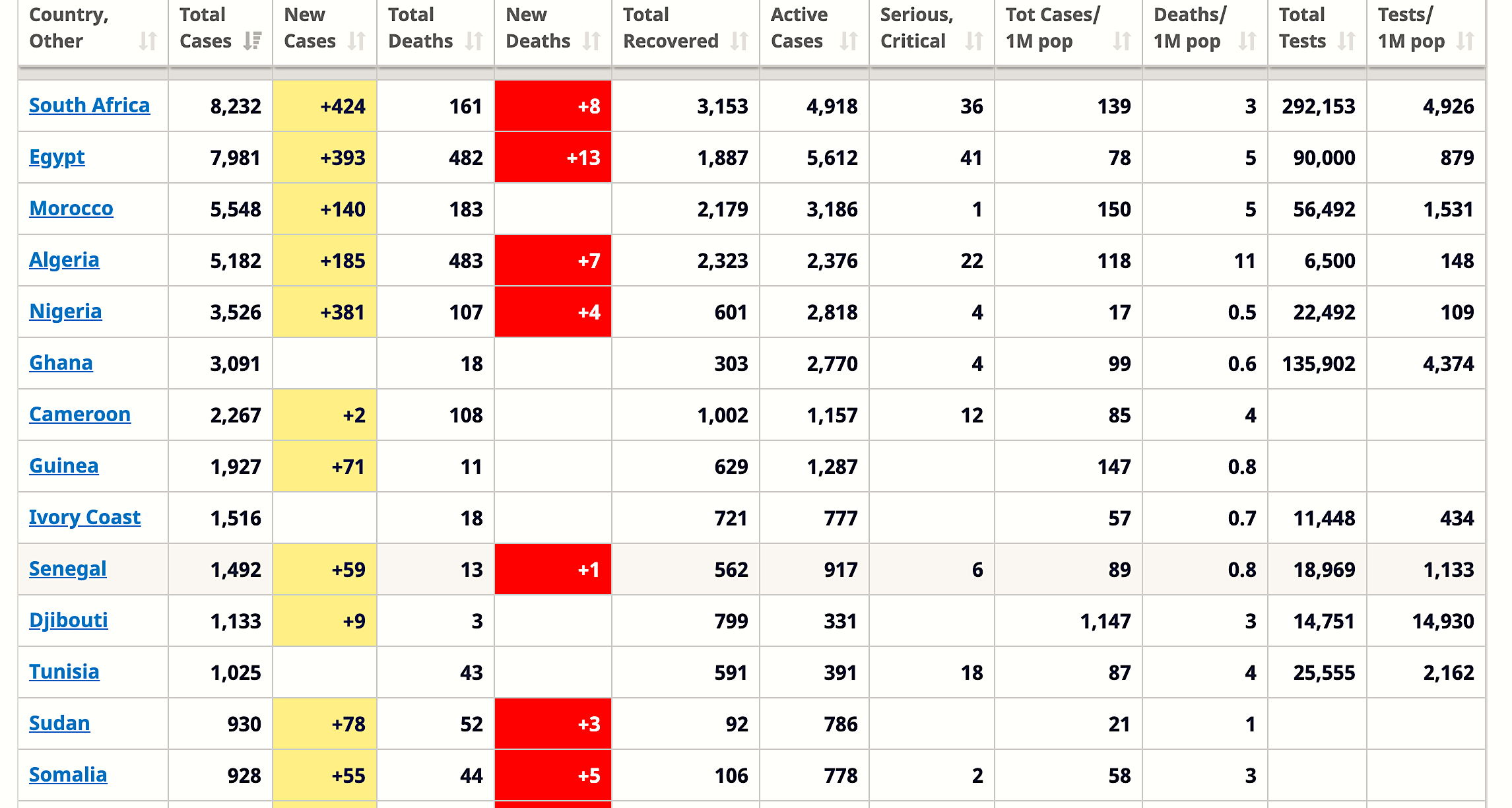 Africa has so far escaped the worst of the pandemic. But that could soon change if the proper precautions are not taken, the World Health Organization warned on Thursday.

South Africa has so far taken the brunt on the continent with 8,232 cases and 161 deaths. The next three countries in infections are in North Africa: Egypt, Morocco and Algeria.  Sub-Sahara has hardly been affected. Nigeria has the most cases with 3,145 total infections (ten times less than the U.S. gets everyday).

Twenty-five African nations have fewer than 200 cases. The entire continent has 54,774 known infections and 2,075 deaths. But the WHO said Thursday: “Eighty-three thousand to 190 000 people in Africa could die of COVID-19 and 29 million to 44 million could get infected in the first year of the pandemic if containment measures fail.”

The WHO used a model that sees a slower rate of transmission, “lower age of people with severe disease” and lower mortality rates “compared to what is seen in the most affected countries in the rest of the world.” 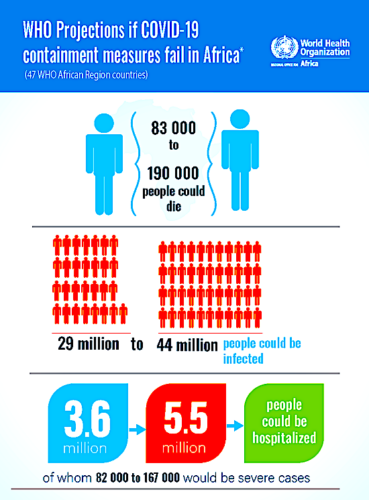 The lower transmission, however, “suggests a more prolonged outbreak over a few years”, according to the WHO study.  It said smaller nations as well as Algeria, South Africa and Cameroon were at a high risk “if containment measures are not prioritized.”

“While Covid-19 likely won’t spread as exponentially in Africa as it has elsewhere in the world, it likely will smolder in transmission hotspots,” said Dr. Matshidiso Moeti, the WHO regional director for Africa, said in a virtual press conference from Brazzaville, Republic of Congo, on Thursday. “Covid-19 could become a fixture in our lives for the next several years unless a proactive approach is taken by many governments in the region. We need to test, trace, isolate and treat.”

Hospitals in Africa could be overrun, the WHO warned. The study’s model showed that 3.6 million–5.5 million hospitalizations, including 82,000–167,000 patients needing oxygen, and 52,000–107,000 needing ventilators would overwhelm hospitals. There are only an average of nine intensive care unit beds per one million people in the 47 African nations that reported to the WHO, with a total population of one billion.

Physical access to these facilities in these countries is also low, meaning Covid-19 cases that could be managed would become “complicated.”  The WHO study said: “Countries across Africa need to expand the capacity particularly of primary hospitals and ensure that basic emergency care is included in primary health system.”

So far about 1,000 African health care workers have been infected and the continent has shortages of protective equipment, Moeti said.

“Among the one billion people in the African Region, the model predicts that if no containment measures are put in place, and luckily, we know that this is not the case up to now, up to 26% could be infected in the first year, and up to 190,000 people could die,” Moeti said. “The epidemic would peak within four weeks of the start of widespread community transmission.”

Moeti said:  “The importance of promoting effective containment measures is ever more crucial, as sustained and widespread transmission of the virus could severely overwhelm our health systems. Curbing a large-scale outbreak is far costlier than the ongoing preventive measures governments are undertaking to contain the spread of the virus.”

The containment measures recommended by WHO are social distancing and “hygiene improvement.” The WHO is using networks already set up to fight Ebola. Moeti said:

“We know that to stop the spread of the virus, the key public health measures need to be in place in every community, even where cases have not been reported, readiness capacities should be prepositioned. I’d like to reiterate that these measures are surveillance, identifying cases early, testing people early, tracing their contacts, and then isolating both the cases and the contacts to limit the spread of the virus. We have seen countries like Namibia and Seychelles follow closely these measures closely and they have not reported any cases now for one month.”