The U.S. is trying to extradite Julian Assange to stand trial for espionage, but even though sedition is no longer on the books, that’s what the U.S. is really charging him with, says Joe Lauria.

The United States has had two sedition laws in its history. Both were repealed within three years. Britain repealed its 17th Century sedition law in 2009. Though this crime is no longer on the books, the crime of sedition is really what both governments are accusing Julian Assange of.

The campaign of smears, the weakness of the case and the language of his indictment proves it.

The imprisoned WikiLeaks publisher has been indicted on 17 counts of espionage under the 1917 U.S. Espionage Act on a technicality: the unauthorized possession and dissemination of classified material—something that has been performed by countless journalists and publishers over the decades. It conflicts head on with the First Amendment.

But espionage isn’t really what the government is after. Assange did not pass state secrets to an enemy of the United States, as in a classic espionage case, but rather to the public, which the government might well consider the enemy.

Assange revealed crimes and corruption by the state. Punishing such legitimate criticism of government as sedition has deep roots in British and American history. 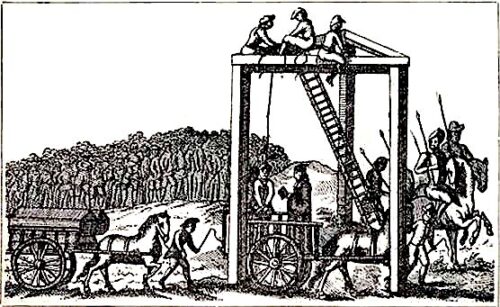 Tybun Tree, place of execution near where Marble Arch now stands in London.

Sedition was seen in the Elizabethan era as the “notion of inciting by words or writings disaffection towards the state or constituted authority.” Punishment included beheading and dismemberment.

“In their efforts to suppress political discussion or criticism of the government or the governors of Tudor England, the Privy Council and royal judges needed a new formulation of a criminal offence … This new crime they found in the offence of sedition, which was defined and punished by the Court of Star Chamber.… If the facts alleged were true, that only made the offence worse,” wrote historian Roger B. Manning. Sedition fell short of treason and did not need to provoke violence.

Though the Star Chamber was abolished in 1641, the British Sedition Act of 1661, a year after the Restoration, said, “…a seditious intention is an intention to bring into hatred or contempt, or to exite disaffection against the person of His Majesty, his heirs or successors, or the government and constitution of the United Kingdom.”

Under President John Adams, the first U.S. Sedition Act in 1798 put it this way:

“To write, print, utter or publish, or cause it to be done, or assist in it, any false, scandalous, and malicious writing against the government of the United States, or either House of Congress, or the President, with intent to defame, or bring either into contempt or disrepute, or to excite against either the hatred of the people of the United States, or to stir up sedition, or to excite unlawful combinations against the government, or to resist it, or to aid or encourage hostile designs of foreign nations.”

While WikiLeaks publications have never been proven false, the U.S. government is certainly portraying its work as “scandalous and malicious writing against the United States” and has accused him of encouraging “hostile designs” against the country.

Congress did not renew the Act in 1801 and President Thomas Jefferson pardoned those serving sentences for sedition and refunded their fines.

When President Woodrow Wilson backed the Espionage Act in 1917 he lost by one Senate vote on an amendment that would have legalized government censorship.

So the following year Wilson pushed for another amendment to the Espionage Act. It was called the Sedition Act, added on May 16, 1918 by a vote of 48 to 26 in the Senate and 293 to 1 in the House. 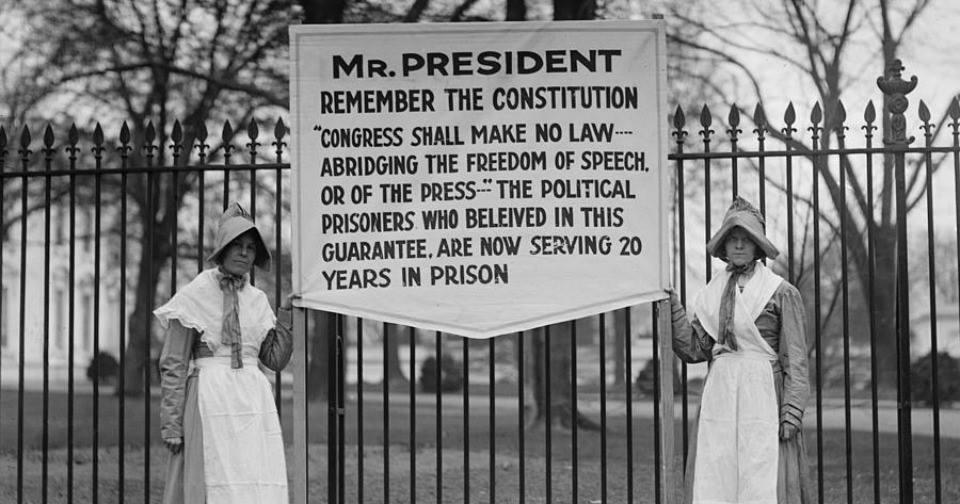 1918 protest in front of the White House against the Sedition Act.

The media at the time supported the Sedition Act much as it works today against its own interests by abandoning the seditious Assange. Author James Mock, in his 1941 book Censorship 1917, said most U.S. newspapers “showed no antipathy toward the act” and “far from opposing the measure, the leading papers seemed actually to lead the movement in behalf of its speedy enactment.”

Among other things, the 1918 Sedition Act stated that:

The U.S. has certainly seen revealing prima facia evidence of U.S. war crimes and corruption as being “disloyal, profane, scurrilous, or abusive” towards the U.S. government and military.

A month after the 1918 Sedition Act was passed, socialist leader Eugene Debs was sentenced to ten years in prison for publicly opposing the military draft. In a June 1918 speech he said: “If war is right let it be declared by the people. You who have your lives to lose, you certainly above all others have the right to decide the momentous issue of war or peace.”

While in jail Debs received one million votes for president in the 1920 election.  Assange’s defiance of the U.S. government went well beyond Debs’ anti-war speech by uncovering war crimes and corruption. 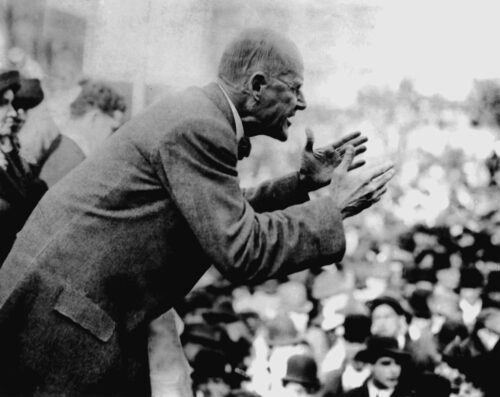 Debs at a 1918 rally, shortly before being arrested for sedition for opposing the draft. (Wikimedia Commons)

For being seditious, Debs and Assange are the most prominent political prisoners in U.S. history.

Despite an attempt by Attorney General A. Mitchell Palmer (of the anti-red Palmer Raids) to establish a peacetime Sedition Act, it was repealed in 1921–but not before thousands of people were charged with sedition.

It was repealed because it was not seen as befitting a democratic society.  Prosecuting Assange no longer arouses such widespread sentiment.

Except for a technicality in the Espionage Act, which needs to be challenged on constitutional grounds, the U.S. has no case against Assange. The weakness of the government’s case points to it falling back on the abolished crime of sedition as the real, unstated charge.

The superseding indictment against Assange makes plain that official Washington is acting out of a fit of pique more than a sense of injustice. It is angry at Assange for revealing its dirty deeds.

He is seen not only as having acted disrespectfully to the U.S. government, but also stirring up popular opposition. In other words, he has committed an act of sedition.  Because that crime is no longer on the books, it has to be described in a different way.

There is really only one technical infraction of the law that Assange is being accused of:  unauthorized possession and dissemination. The rest of the indictment is about behavior that is not illegal, but what can be called seditious.

The Espionage Act indictment is so weak that it can only resort to an accusation that Assange endangered U.S. “national security” and aiding the enemy with no evidence to prove that that had ever happened. 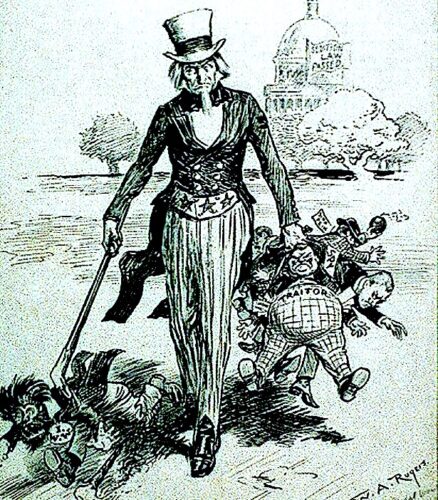 Instead U.S. officials have been incensed with Assange for the embarrassment of uncovering their crimes and corruption.  Since sedition is no longer on the books, they are only left with Section 793, paragraph (e) of the Espionage Act:  the unauthorized possession and dissemination charge.

Innumerable journalists over the decades have possessed and disseminated classified information and continue to do so.  Every citizen who has retweeted a WikiLeaks document has possessed and disseminated classified information. As the first journalist charged with this, a constitutional conflict is set up with the First Amendment, which will likely be challenged in court if Assange is extradited to the U.S.  (A U.S. senator and a representative last month introduced a bill that would exempt journalists from paragraph (e)).

Left with no serious charge against him, the indictment is in line with the condemnation of Assange by U.S. officials, such as former U.S. Vice President Joe Biden, who called him a “high-tech terrorist” and a British judge who called him a “narcissist.”

In other words, Assange has insulted the powerful in the manner of an Elizabethan subject. He’s being accused of sedition, including stirring up dissent and unrest, such as in Tunisia, which sparked the Arab uprisings of 2010-2011.

Assange revealed what corporate media covers up: part of the long post-war U.S. history of overthrowing governments and using violence to spread its influence over the globe. He showed the U.S. motive is not spreading democracy but expanding its economic and geo-strategic interests. It is plainly seditious to do so contrary to a power-worshipping corporate media suppressing these historical facts.

Sedition is evidently a crime whose time has covertly come again.

Part Two in this series will be on The History of the Espionage Act and How it Ensnared Julian Assange.

34 comments for “ASSANGE EXTRADITION: Espionage is the Charge, But He’s Really Accused of Sedition”