The main objective of the Brazilian president’s expanded authority is expected to be the prevention  and possible repressions of a social explosion, write Anis Chowdhury and Jomo Kwame Sundaram. 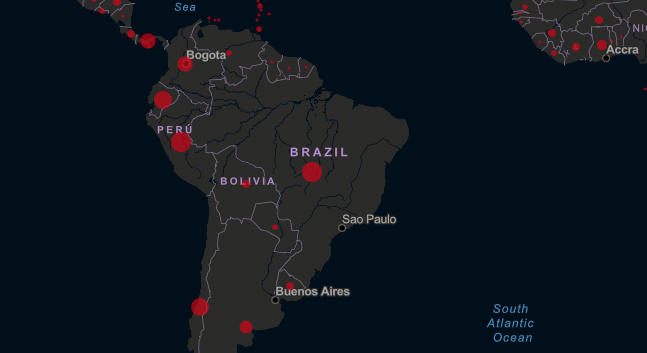 In his final briefing as minister, Mandetta urged staff to challenge “denialism” and mount an “unyielding defence of life and science.” “Don’t be afraid,” he said, “Science is light … and it is through science that we will find a way out of this.”

Meanwhile, Brazil has begun digging large graveyards ahead of an anticipated peak of the national Covid-19 epidemic. In Sao Paulo’s Vila Formosa cemetery, the largest in Latin America, about 20 excavators are digging around the clock.

In an impassioned interview, popular former President Lula da Silva accused Bolsonaro of leading Brazilians “to the slaughterhouse” with his irresponsible handling of the crisis. Officially confirmed cases have soared to over 38,000, with close to 2,500 deaths as of April 19.

But these figures likely understate the gravity of the situation as Brazil’s states have no standardized testing method, and mainly test those hospitalized. A Brazilian research group estimates actual infections at 15 times the official number. Lula’s successor, Dilma Rousseff has asked: “Why is there no testing? What are they trying to conceal?”

Another study projects that without any action to stem the pandemic, Brazil could face more than 1.15 million deaths with only “enhanced social distancing” for the elderly over 70. Even with extreme lockdown measures and widespread testing, the death toll would still be 44,200 due to late action.

Despite the life-threatening risks, Bolsonaro has compared the Covid-19 threat to a “little flu” or “cold,” dismissing it as a media-hyped “fantasy.” He has dismissed preventive measures as “hysterical” and has repeatedly demanded that state governors withdraw their social distancing orders.

Brazilian President Jair Bolsonaro is known for his finger-gun gesture, which he used during the presidential campaign. (Marcos Corrêa, Wikimedia Commons)

On March 24, Bolsonaro emulated U.S. President Donald Trump, claiming “those under 40 rarely die of coronavirus and that even he, at 65, shouldn’t be worried because he was ‘an athlete’ in the past.” On April 8, Bolsonaro passed the buck, “Each family has to protect its elderly people, not to throw that responsibility to the state.”

Bolsonaro has disregarded social distancing recommendations, urging others to also defy them. At a pro-government rally he called on March 15, he shook hands with the crowd while supposed to be in quarantine after 24 people who had travelled with him to the United States had tested positive for the virus!

The Brazilian president has also lashed out at Brazil’s state governors, who have ordered shops and schools closed to slow the spread of the pandemic that threatens to overwhelm the health system in Latin America’s largest nation. Nevertheless, Brazil’s 27 state governors have defiantly maintained restrictions.

Sao Paulo has been the epicenter of the outbreak in Brazil. Without offering a shred of evidence, Bolsonaro accused the state of exaggerating its Covid-19 deaths. Its governor Joao Doria has accused Bolsonaro of unleashing an “uncontrolled attack” against him for his strict measures in the economically crucial industrial state.

On March 23, Bolsonaro issued a presidential order suspending deadlines for government agencies to respond to public information requests, including his policies to address the health emergency. Brazil’s Congress rejected the decree.

On March 28, a federal judge ordered the federal government to stop a publicity campaign urging Brazilians to flout social distancing recommendations, initiated by the president’s own communications office and his son, Senator Flavio Bolsonaro.

On April 1, Bolsonaro posted a video claiming shortages of food and other essential products because of Minas Gerais state government measures, which his own agriculture minister later admitted was false. 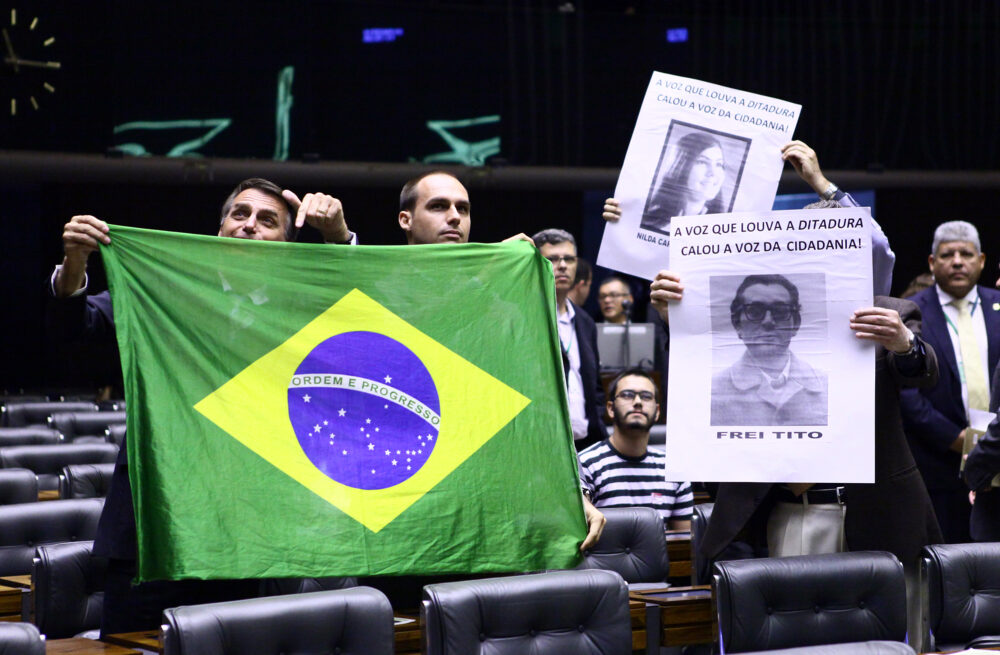 On April 1, 2014, Jair Bolsonaro and his son Eduardo hold up a Brazilian flag during a ceremony to mark the 50th anniversary of the 1964 military coup d’état. (Gustavo Lima, Câmara dos Deputados, CC BY 3.0, Wikimedia Commons)

Meanwhile, the Brazilian elite is losing faith in Bolsonaro as his handling of the crisis threatens to call into question the entire status quo. In response, Bolsonaro has appointed his chief of staff,  General Walter Braga Netto to head a new crisis committee.

Braga Netto was praised by Vice President General Hamilton Mourão for “doing what we (the military) know, putting the house in order,” less than a week after Mourão celebrated the 1964 U.S.-backed military coup that led to a 21-year military dictatorship, tweeting “56 years ago, the Armed Forces intervened to face the disorder, subversion and corruption that ravaged institutions and scared the population.”

Meanwhile, Army Commander General Edson Leal Pujol issued a March 24 statement, warning: “The Strong Arm will act if necessary, and the Friendly Hand will be more extended than ever to our Brazilian brothers,” concluding “WE WILL FIGHT WITHOUT FEAR!”

It has been suggested that Braga Netto is now the “operational president,” with Army support, at least for the duration of the Covid-19 crisis. On April 19, Bolsonaro joined demonstrations in Brasilia protesting coronavirus-related lockdowns, calling for a military coup outside Army headquarters!

The main objective of enhancing federal executive powers is expected to be preventing, and, if necessary, repressing an increasingly likely social explosion.

← COVID-19: Neither China Nor the WHO Are to Blame for Trump’s Failures
COVID-19: In NYT, US Intelligence Portray Veteran DC Columnist’s Report as Chinese Disinformation Meant to Sow Panic →