It is never a good sign when the political/media class all across the aisle begins loudly trying to out-hawk one another, says Caitlin Johnstone. 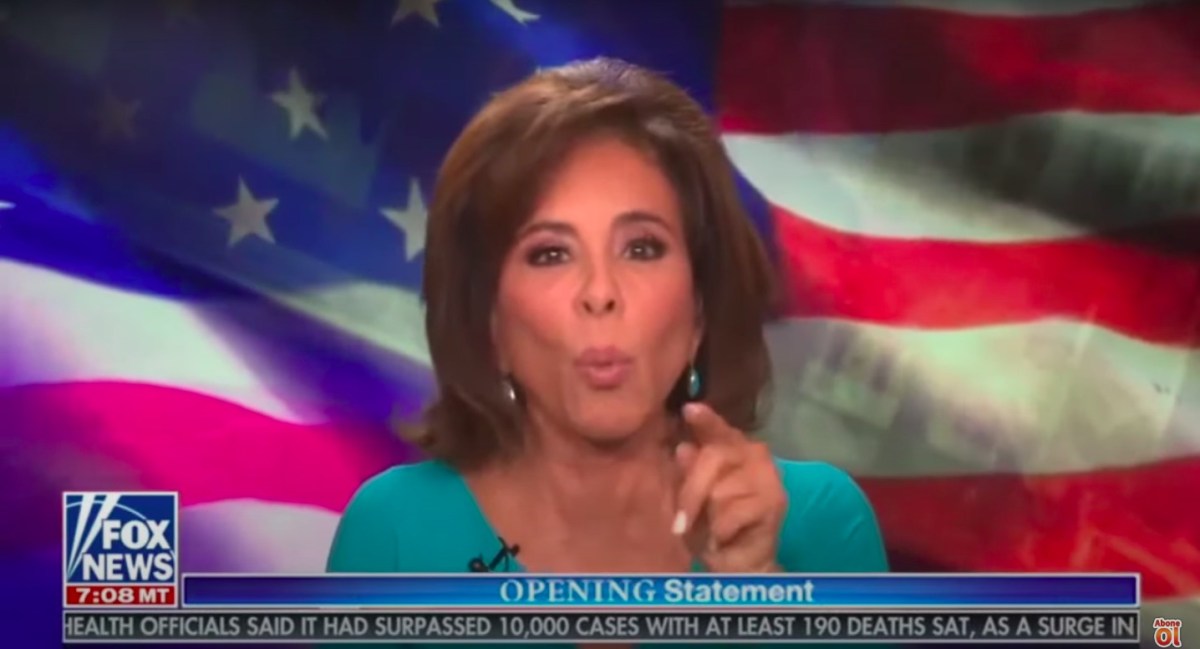 Hysteria about China has been kicked into high gear by the political/media class who are responsible for manufacturing support for the cold war escalations which will be necessary to prevent the U.S. from being surpassed on the world stage as a unipolar superpower.

Fox News’ Jeanine Pirro has aired a fire-and-brimstone monologue on China that looks like a fictional news clip from some kind of film noir-style movie adaptation of a really ham-fisted dystopian graphic novel. It really needs to be seen to be believed, so give it a view here when you get a chance:

“China is the one that’s out of control,” Pirro spat, punching the word ‘China’ like she was speaking a profanity at someone she despises. “We’re not going to let you destroy this country or our way of life. We’ve fought too hard and we’ve fought too long to lose it to a Wuhan – that’s what I said, a WOO-HAN virus!”

“You want to control people? You politicians want to flex your muscles?” Pirro asked, referring to government lockdowns. “Well start working on how you’re gonna punish, ostracize, alienate, and financially sanction, and make China accountable for what they did to us and the rest of the world!”

It’s a legitimately scary segment with an unbelievable amount of vitriol, and Pirro isn’t the only Fox News pundit ramping up the anti-China hysteria.

Tucker Carlson recently had on “former” CIA officer Bryan Dean Wright to tell his massive audience about the danger posed by the Chinese menace, and pitched him a question clearly geared to set up Wright to claim without evidence that leaders of the Democratic Party may in fact be members of the Chinese intelligence agency MSS.

"Former" CIA officer @BryanDeanWright tells Tucker Carlson (who has also tried to join the CIA) that some Democratic Party leaders may in fact be secret intelligence agents working for China. This is easily as deranged as anything we've seen on MSNBC about Russia. pic.twitter.com/3IcRJzJuQm

“We reached out to Senator Feinstein and a number of other elected officials today and asked ‘Have you had contact recently since the outbreak with Chinese officials?’, and not a single one responded. What do you think we should infer from that?” asked Carlson, who is known to have himself tried to join the CIA in the past.

“I think that they’re nervous,” Wright replied. “I think there are a bunch of people who, because they’re either useful idiots, or they have some degree of knowledge and and relationships behind the scenes with the Chinese government. Some of them in fact could be Chinese agents of the MSS, their intelligence service, God forbid. They’re nervous.”

“We’ve got a lot of very nervous folks in the Democratic Party,” Wright added.

This is easily as unhinged as even the most cartoonishly ridiculous Russia hysteria we’ve seen uncorked by Rachel Maddow or anyone on MSNBC, and is not at all different in tone or content; even the use of the term “useful idiots” is right in line with the same reprehensible Russiagate rhetoric we’ve been hearing for the last four years.

The claim that rival parties have been infiltrated by communists has a very long and ugly history in US politics, and now that it’s being weaponized by the American right wing in such a shameless way we can expect it to get a whole lot uglier.

Biden will attack Trump for supposedly being "too soft" on China, and Trump will do the same to Biden.

The 2020 election will be nonstop bipartisan scapegoating of China.pic.twitter.com/ANzV1dTkS7

Not to be outdone the Democrats are now working to out-Trump Trump, with House Speaker Nancy Pelosi demanding that Trump “swiftly begin implementing the Hong Kong Human Rights & Democracy Act”, and a new Biden campaign ad attacking the president for being too soft on China for its handling of the Covid-19 virus.

The ad attacks Trump for failing to force Beijing to allow US government officials into Wuhan to monitor the governing of a sovereign nation during a pandemic outbreak.

“Trump praised the Chinese 15 times in January and February as the coronavirus spread across the world,” says the ad’s narrator in a menacing voice. “Trump never got a CDC team on the ground in China. And the travel ban he brags about? Trump let in 40,000 travelers from China into America after he signed it. Not exactly airtight.”

Attacking Trump from the right on foreign policy has become standard practice for the Biden campaign, with whoever runs his account recently tweeting “Donald Trump says he’s a wartime president — it’s time for him to act like one.”

This is the guy that American progressives still say can be moved to the left? Hilarious.

Even as the world confronts the coronavirus crisis, democracy and human rights continue to be attacked in Hong Kong. @RepMcGovern is right — @realDonaldTrump must swiftly begin implementing the Hong Kong Human Rights & Democracy Act. https://t.co/hn0GiuNrDm

It is never a good sign when the political/media class all across the aisle begins loudly trying to out-hawk one another about a nation which refuses to be absorbed into the US-centralized world order. And make no mistake, this is all this is actually about.

It’s not a coincidence that the two nations the US political/media class has been shrieking the loudest about lately are the two strongest nations which have refused to be absorbed into the US empire. It’s never been about “collusion” or a virus, it’s about stopping multipolarism. This has been obvious for years, but partisan narrative control masks it. More than two years ago I was writing about how Russiagate isn’t about Trump or even really just about Russia, but about hamstringing the Russia-China tandem to stop China’s rise.

Ever since the fall of the Soviet Union and the rise of neoconservatism, the prevailing orthodoxy in the U.S.-centralized power alliance has been to preserve the unipolar world order at any cost. All U.S. foreign policy has been a direct or indirect result of this agenda ever since.

Donald Trump says he’s a wartime president — it’s time for him to act like one.

I never voted for a world order where one powerful government is constantly attacking, destroying and sabotaging any nation that threatens its hegemony. I’m pretty sure you never did either. And yet here we are, forced to accept this insane paradigm, even when the targeted nations in question are nuclear armed and anything could go drastically wrong at any moment as a result of miscommunication or technical malfunction in the heat and confusion of escalated aggression.

This will continue to be foisted upon us whether we like it or not, until this way of life is locked in forever, or until we all die in a nuclear holocaust, or until we force them to stop. It’s that third option that they are working to cut off during the rapid increases in government surveillance and internet censorship we’ve seen implemented during this pandemic, so we’re going to have to want to live a lot more than the empire does.

← On That Leaked Report on UK Labour & Anti-Semitism
COVID-19: ‘Congress Must Cover Paychecks of Every US Worker,’ Says Sanders →