The conflict between the Navy high command, a captain and his threatened crew could underscore a new meaning of national security after the pandemic runs its course, says Gareth Porter.

The United States is experiencing an upheaval from the Coronavirus pandemic that is deeper than anything in modern American history, and military and civilian Pentagon elites have responded to it in a way that seems certain to further magnify the broader corrosive impact of the crisis on their enormous power.

It has further widened the existing socio-political seam between those elites and their servicemen and women who have faced a threat to their health not only from the pandemic itself but from the decisions made by military bureaucrats directly affecting their safety.

That is the larger significance of the dramatic recent events involving Captain Brett Crozier, the crew of USS Theodore Roosevelt and the hapless, now-cashiered Navy Secretary Thomas Modly.

Modly had made the most embarrassing public appearance of a senior official in recent history on board the stricken aircraft carrier after having relieved Captain Crozier, who had received an unprecedented standing ovation from his crew as he walked to shore.

Modly not only attacked Crozier, suggesting he was “stupid” to circulate his letter urging immediate action to evacuate sailors from the ship but was condescending to the crew as well. (584 TR Roosevelt crew, including Crozier, have tested positive and on Monday the first died.)

Modly’s rambling and profanity–laced talk to the crew clearly conveyed the official view that they had no business cheering their Captain, who had stood up for their interests, because he had embarrassed the “chain of command.” 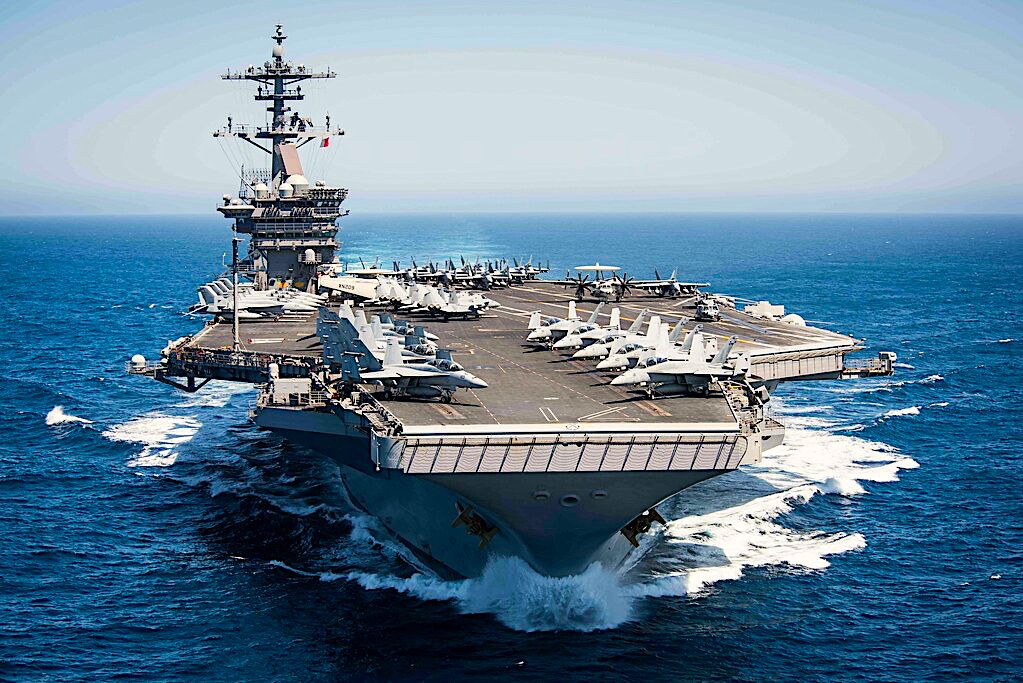 Modly thus dramatically illustrated the wide gulf that separates military and civilian Pentagon elites from the lives of U.S. servicemen and women. The interests of the senior military and civilian officials in the Pentagon have always focused primarily on their missions and capabilities, which are the tokens of their power and prestige.

The health of soldiers and sailors has inevitably emerged as a secondary consideration, despite official protestations to the contrary. That much is clear from a review of the press briefing given by Modly and Chief of Naval Operation Admiral Michael Gilday on March 24, after the first three cases of Covid-19 had been identified on the Theodore Roosevelt.

Gilday revealed in the briefing that the Navy was only testing when there was evidence of symptoms and not for all sailors on board the ship.

The Navy Surgeon General Rear Admiral Bruce Gillingham further explained the Navy was doing “surveillance testing,” which he described as “cross section” testing, to “give us an idea”, rather testing all the sailors onboard. When another reporter asked how concerned the Navy was about a new cluster of cases emerging onboard, Gillingham didn’t address that question and instead answered another question the reporter had posed.

Even more revealing of the Navy’s priorities, however, were the responses to a journalist’s observation that the Navy did not appear to have a coherent position guiding commanders in regard to maintaining social distance onboard. Modly said it was “almost impossible to try to micromanage these types of decisions,” and Gilday added, “We really do trust the judgment of our commanders, and so we’re giving them authority to do what they think they need to do to remain on mission and take care of people.”

Other Carriers Hit With Virus

Commanding officers could hardly have missed the clear implication that they were to “remain on mission” and do the best they could to deal with the risk of a Covid-19 outbreak that would inevitably be significant. By the time of that press briefing, of course, the virus was already spreading rapidly on the Theodore Roosevelt, and within days, it was a severe emergency demanding radical action.

The full story of what happened during those crucial days is still untold, but Captain Crozier obviously met resistance from the “chain of command” to his call for immediate evacuation of a very large number of the 4,000 sailors from the ship, leaving behind about 1,000 to maintain the nuclear reactors and the billions of dollars of weapons onboard.

The same pattern of Navy treatment of the problem is evident in the case of the USS Nimitz, which is still at its base in Bremerton, Washington. It has had two positive diagnoses, including one sailor who had taken sick while on leave. Fifteen more sailors who had been in contact with him had been taken off the ship and quarantined, but those remaining onboard have not been tested for Covid-19, according to the father of a new member who has stayed in close contact with his son. The father reported last week that the screening included asking some, but not all crew members whether they felt ill.

The father told a reporter that he “feels like they’re not taking it seriously.” The Nimitz is preparing for sea trials this month that will last for weeks, and the Navy and the Pentagon are obviously eager to have it proceed without delay. The responses of Vice-Chairman of the Joints Chief of Staff Gen. John Hyten and Deputy Secretary of Defense David L. Norquist, at an April 8 press briefing, revealed unintentionally the way the Pentagon elite prioritizes its institutional interests over the military personnel facing the Covid-19 threat. (Covid-19 cases have also been detected on the  the Ronald Reagan, the Carl Vinson carriers.)

More than one journalist asked how the Pentagon was planning to adjust its operational tempo to take account of outbreaks like the one on the Theodore Roosevelt in the coming coming months. But Hyten and Norquist refused to acknowledge any such necessity.

When one journalist asked how the Theodore Roosevelt could participate in combat if 10 percent of its crew were found to be positive for Covid-19, Norquist incredibly suggested the Navy could take it in stride, explaining, “[A] significant percentage for the military are asymptomatic. Others have mild flu-like symptoms, the sort of things that our fleet is normally used to dealing with.” 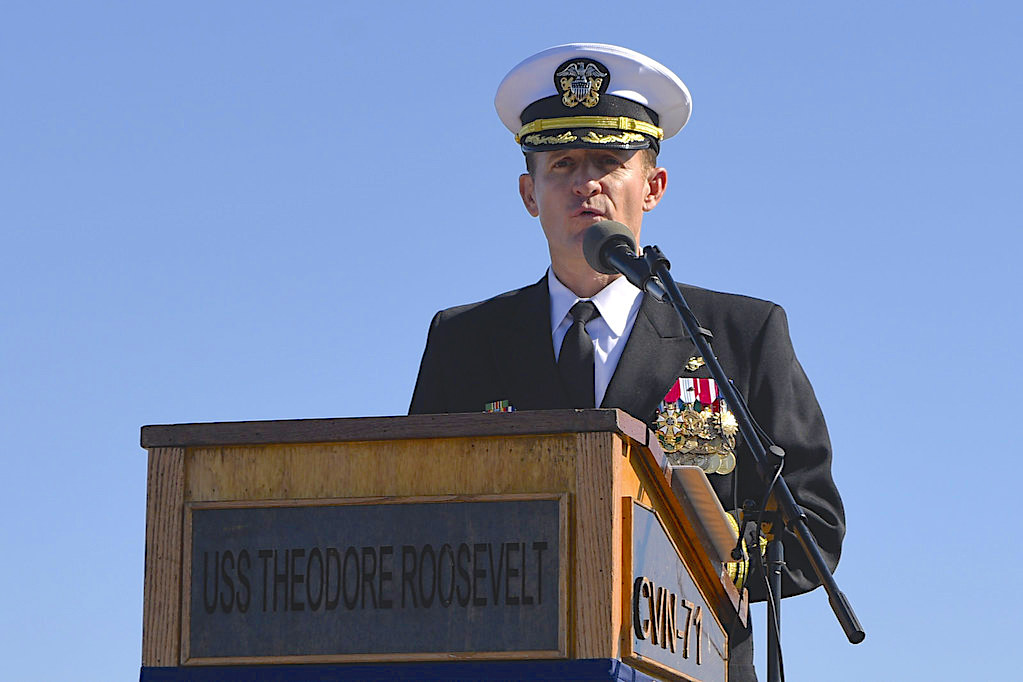 Captain Crozier’s four-page letter, which had elicited the wrath of those Pentagon and Navy bureaucrats, challenged their deeply engrained habit of pursuing those institutional interests to demonstrate the super power of the U.S. military, while giving minimal weight to the costs imposed on ordinary soldiers and sailors.

“We are not at war,” Crozier had observed. “Sailors do not need to die. If we do not act now, we are failing to properly take care of our most trusted asset — our Sailors.”

Taking Crozier down looked like a safe bet for opportunists like Modly, Norquist and Hyten, especially since Donald Trump had publicly scolded Crozier for sending the letter. But the political tide had already shifted against them, as Crozier emerged as a national hero for his defense of the interests of sailors against the wishes of the bureaucrats.

And more important, as Americans begin to come to grips with the enormity of the socio-economic catastrophe caused by a global pandemic for which the United States government was totally unprepared, a reckoning seems inevitable for the political-military institutions represented by these officials.

Retired Army Gen. David Barno, who was head of the combined forces command in Afghanistan 2003-05 and Defense policy analyst Nora Bensahel, have predicted that Americans will not look at “national security” in the same way again. Instead, Barno and Bensahel write that Americans will “conclude that the country has gotten the very idea of security wrong.”

“Americans will look at national security differently than they did before and may no longer be willing – or even able – to give the Department of Defense almost three-quarters of a trillion taxpayer dollars each year to defend against foreign threats.

Americans will look at the biggest single discretionary spending line in the government’s budget and conclude that the country has gotten the very idea of security fundamentally wrong. They will realize that this massive loss of life was inflicted not by a terrorist attack or rampaging enemy armies, but by an unseen and amorphous health threat. And they will recognize that despite spending more than $700 billion each year on the Department of Defense, the Pentagon’s focus on external threats meant that it played only a very small role in protecting the nation against this deadly and life-changing threat, and in responding once it began to spill across the nation.”

A poll taken in February found that 31 percent of those surveyed thought that the United States was spending too much on defense. But that number will likely rise after the pandemic ends as Americans start to ask: How well did all that defense spending protect us? Many are likely to conclude that domestic threats and global health issues imperil their personal security and the American way of life far more than any looming foreign adversary. They may emerge from this crisis with radically different spending priorities (as discussed below) that will pressure the defense budget even further downward.”

The utter failure of the Pentagon bureaucracy to take care of its own soldiers and sailors in the face of the pandemic should combine with this broader shift in political attitudes and priorities to present the biggest threat to the power of the military-industrial-congressional complex in its entire history.

Out of the havoc and ruin of this disaster should emerge the first real opportunity for a popular movement to end the dominance of that complex over American politics, policy and resources once and for all.

Gareth Porter is an independent investigative journalist and historian and winner of the 2012 Gellhorn Prize for Journalism. His latest book, with John Kiriakou, is “The CIA Insider’s Guide to the Iran Crisis: From CIA Coup to the Brink of War.”

31 comments for “COVID-19: Fallout From a Navy Captain’s Heroism: The Possible Emergence of a New Idea of ‘National Security’”