Washington’s priorities are maintaining divisions, suspicions, animosities and enmities as if there were no global humanitarian crisis.

Cuba sends 50–odd doctors and nurses to Italy, among the nations the COVID–19 virus has hit hardest. It was Cuba alone that assisted Britain in managing passengers on a stricken cruise ship in the Caribbean earlier this month. At writing, Havana is poised to send  “medical brigades” — just what they should be called — to Venezuela, Nicaragua, Suriname, Jamaica, and Grenada. The struggle continues, let us say.

China dispatches aid, equipment, and doctors to Italy, Serbia, Iran, Venezuela, the Philippines, and other countries fighting the corona virus onslaught. Italy, believe it or not, is discussing the dispatch of medical assistance from Venezuela.

Russia sends convoys of aid, notably testing kits, to 10 ailing nations, among them Iran, Belarus, Armenia, Uzbekistan, Azerbaijan, North Korea, and Mongolia. South Korea “will provide as much support as possible,” President Moon Jae-in told President Donald Trump by telephone last week, “if there is spare medical equipment in Korea.” Seoul sent $5 million worth of medical equipment to Wuhan, the first epicenter of the virus, in the early days of the pandemic.

Cuban doctors arriving in Italy to help during the pandemic. (Twitter, @JoseCarlosRguez)

There must be more of this going on. Surely there will be as the weeks of crisis proceed. What do we witness? The world draws together — or some of it, anyway. This is the unity and solidarity we Americans wish we could summon among us but cannot. We find it primarily and not so oddly among non–Western nations. The next paragraph is a review of what America is doing for the sake of common humanity in the face of a common crisis.

Instead, the Trump administration, the grotesquely small-minded Secretary of State Mike Pompeo bearing the standard, warns other nations away from accepting assistance from those such as Cuba that respond to COVID–19 in selfless behalf of others. The secretary of state, and many others in his poisonous camp, regularly belittle such efforts as nothing more than cynical efforts to enhance public images. They are not the ones in need of such things now, if you have not noticed.

When President Donald Trump telephoned Chinese President Xi Jinping to request China’s assistance last Friday, Xi agreed “to unreservedly share our experience in prevention and control efforts and treatment with the World Health Organization and countries including the U.S.” This was a wise burying of the hatchet, but against what background?

Peter Navarro, the White House trade adviser, quickly asserted that Americans must be wary of this as a “propaganda exercise.” Gazumping  the administration’s relentless China hawk, Pompeo disrupted a session of Group of 7 foreign ministers by insisting their final communiqué refer to COVID–19 as “Wuhan virus.”

Not for the first time, the bovine secretary flopped in the presence of his more civilized (if far from faultless) counterparts. A day before the Trump–Xi exchange, Pompeo’s Deep State Department — there is appeal in this latest Trump coinage — let it be known the U.S. is considering expelling more Chinese journalists. They are “foreign agents, not ‘journalists,’” a department spokeswoman announced paranoiacally. Just the time for this. 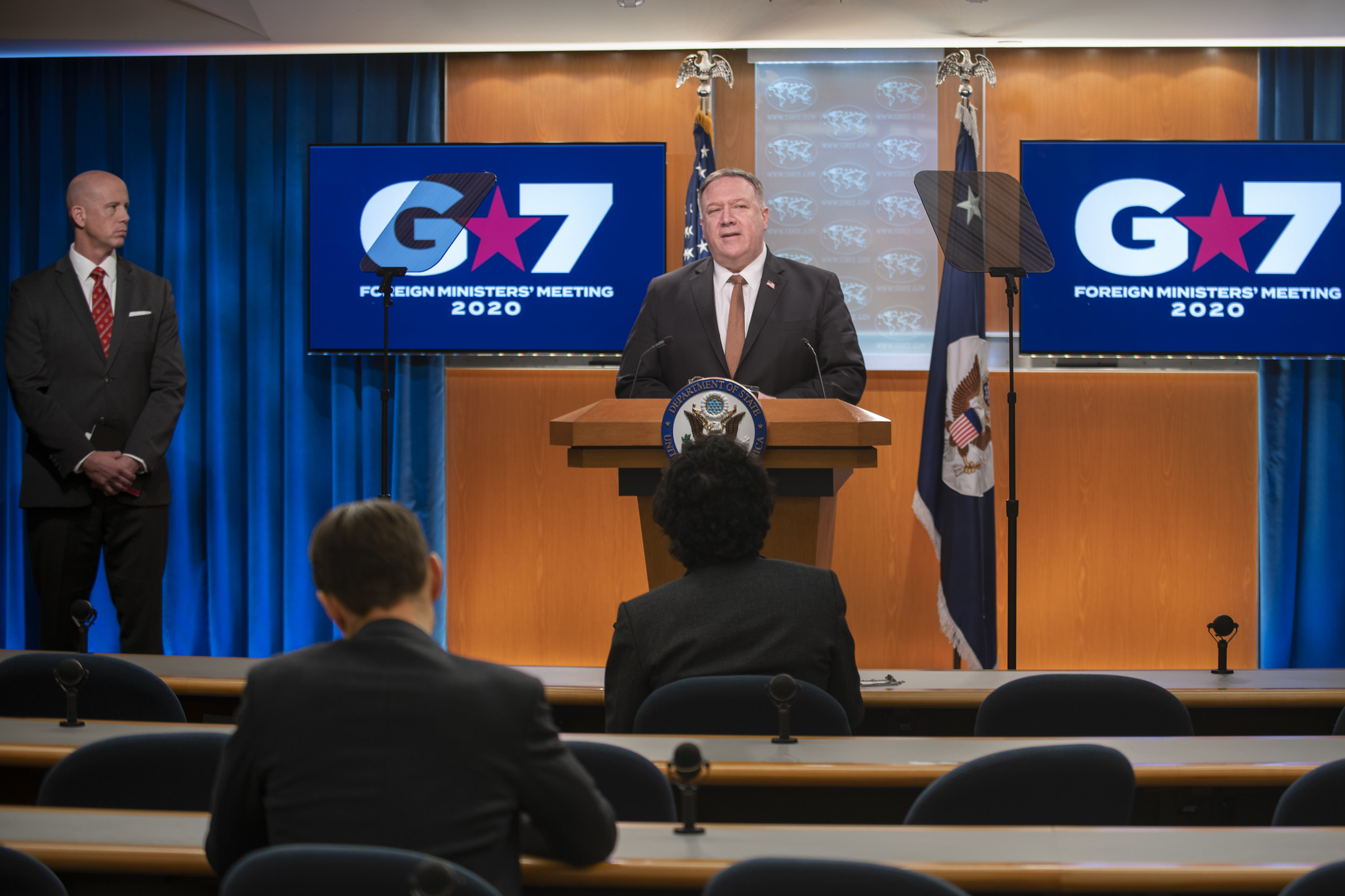 Elsewhere in the news, as they say, the Justice Department finds this the right moment to bring patently silly charges of “narco-terrorism” against Nicolás Maduro, Venezuela’s eternally beleaguered president.

On Friday, the Agency for International Development, that long-reliable instrument of U.S. coercion, “regime change,” and all around disruption, announced it would cut off aid worth tens of millions of dollars to Yemen’s health care programs. A.I.D. cited the presence of Houthi rebels in northern Yemen—where there have been Houthi rebels, excuse me, for many years.

Where would we be without another strike at the Iranians? Treasury announced yet another set of sanctions against Iran last Thursday in full knowledge of the unconscionable damage the U.S. is doing to Tehran’s campaign to fight COVID–19. As Caitlin Johnstone astutely points out, this is back-door biological warfare; Washington is up to the same thing in Venezuela, of course.

One of the truly touching moments in the past couple of weeks’ events was captured in a Reuters video shot as Cuban doctors disembarked in Italy last Monday. Asked whether the Cubans in white coats were nervous about treating patients where COVID–19 is rampant, a gray-haired physician with smiling eyes named Grasiliano Diaz replied, “Whoever says he isn’t afraid is a superhero, and we’re not superheroes. We’re revolutionary doctors.” After 60 years, the Cubans still know who they are and still hold high their purpose.

Put this next to what the U.S. has got up to lately. Washington’s priorities are maintaining divisions, suspicions, animosities, and enmities as if there were no global humanitarian crisis. Indeed, it is taking advantage of the crisis when and wherever there is opportunity. Self-interest is paramount, the jealous preservation of power our leadership’s highest value.

Tom Cotton, the Arkansas Republican and the stupidest person taking up valuable space in the Senate, now furthers a new rehearsal of precisely the “yellow peril” racism that shamed this nation a century ago. “China unleashed this plague on the world,” he told Fox News in an interview that must be seen to be believed, “and there will be a reckoning when we’re on the back side of it.” 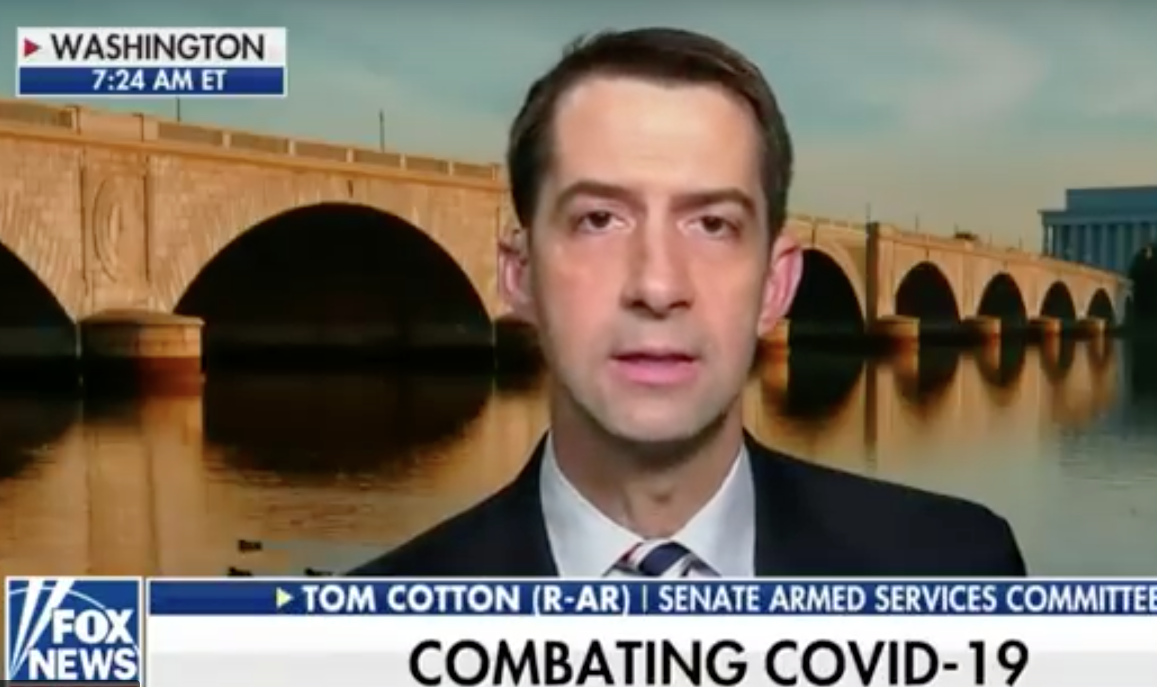 Eli Lake, among Israel’s most reliable running dogs, argued in a Bloomberg column  that Washington should point-blank ignore Iran’s repeated pleas for sanctions relief in view of its inability to counter the spread of COVID–19 effectively. The head says it all: “The corona virus is not a reason to lift sanctions on Iran.” Together with Cotton, Lake must be counted among the outstanding cretins of last week, although it is perfectly true they articulate what a depressing number of Americans think—or think they think.

A few months into this crisis, there is a fundamental distinction to be made between strong nations and the merely powerful. Cuba proves a strong nation, as does China, as does Russia, as does South Korea, as do Iran and Venezuela even in their debilitated states. The U.S. is nothing if not powerful, but by the same token it is also revealed now as nothing, if not weak.

“It is the choice our leaders make as they refuse to surrender an ephemeral preeminence to a salutary reconnection to the rest of humanity.”

In a word, the America of 2020 proves itself entirely incapable of transcendence even amid the direst circumstances since World War II. Václav Havel, the late Czech president, delivered a splendid speech on this subject in the mid–1990s to an audience of Americans in Philadelphia — just the people who needed to hear it. He meant “transcendence as a hand reached out,” as “a joyously experienced need to be in harmony even with what we ourselves are not,” as “the only real alternative to extinction.”

Wholly lacking in this capacity, we Americans are about to discover that COVID–19 is nicely on the way to proving our Waterloo. One is all for the drowning of American imperial hegemony in a rising sea of multipolarity and the non–West’s emergence to a position of parity.

This now occurs before our eyes and is inevitable as history’s wheel turns. The pity of it is, by the evidence to date, that this will also prove America’s moment of precipitous decline. This was not inevitable. It is the choice our leaders make as they refuse to surrender an ephemeral preeminence to a salutary reconnection to the rest of humanity.

Who would have thought we would tumble so swiftly down our big rock candy mountain? One imagined multipolarity and decline, if America choses decline, to be a phenomena that arrived gradually over the course of years. Now they knock urgently on our doors.

On March 4, 1933, the newly elected Franklin Delano Roosevelt told Americans in the depths of the Depression, “This is preeminently the time to speak the truth, the whole truth, frankly and boldly.” He did a good job of it. This was his “only thing we have to fear” speech.

“Plenty is at our doorstep, but a generous use of it languishes in the very sight of the supply,” F.D.R. said.

“Primarily this is because the rulers of the exchange of mankind’s goods have failed, through their own stubbornness and their own incompetence… Faced by failure of credit, they have proposed only the lending of more money. Stripped of the lure of profit by which to induce our people to follow their false leadership, they have resorted to exhortations, pleading tearfully for restored confidence. They know only the rules of a generation of self-seekers. They have no vision, and when there is no vision the people perish.”

Political speeches now are cotton candy by comparison. In these remarks, the great New Dealer transcended the quotidian clutter of his moment. And what of us? Are we left now only with opportunists in Washington and the conniving profiteers?

← COVID-19: Contending with a Dual Pathology in Britain
COVID-19: Italy Becomes 53rd Nation to Call for Global Ceasefire During Pandemic →

28 comments for “PATRICK LAWRENCE: US Defiles ‘Common Humanity’ During Pandemic”