It’s time to re-think what it means to be prepared to face threats, and what type of political and economic institutions we need to do so, writes Andrew Spannaus. 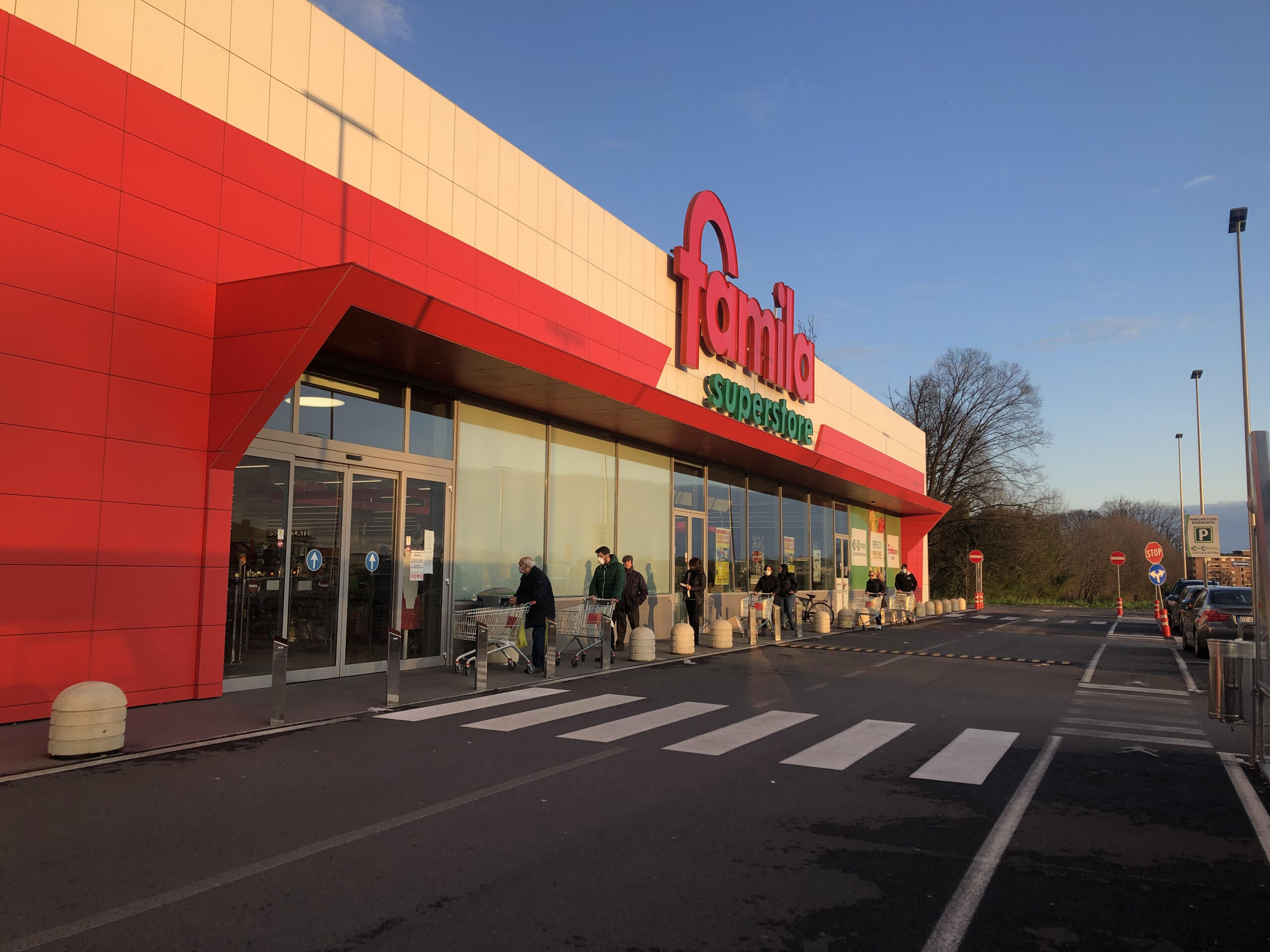 Shoppers line up at a supermarket outside of Milan. (Andrew Spannaus)

Three weeks have passed since the first restrictions were announced in Northern Italy to combat the spread of the novel coronavirus; three weeks in which things have gotten much worse, quickly, making Italy the second hardest-hit country in the world at this point.

As of March 16, almost 28,000 people were known to be infected and over 2,000 deaths were attributed to COVID-19. The numbers have shot up over the past week, although cases are still low in many areas of the country, and the initial centers of the infection — a few small towns about 40 miles southeast of the metropolis of Milan — have seen almost no new cases in the last few days.

The whole country is now on a sort of lockdown: schools and churches are closed, as are restaurants, bars, and all other retailers except for food stores, pharmacies, and a few other “necessary” shops. Yet numerous companies remain open, so while remote work is encouraged as much as possible, many still go to work; and public transportation is still running. So “social distancing” here is not yet as severe as in Wuhan, the initial source of the outbreak in China.

Indeed, in addition to food shopping, people go out for walks or exercise, although police are now driving around telling everyone to “stay home,” the basic message transmitted at all levels of the institutions now.

From Reluctance to Rationing

These measures were adopted by a “prime minister’s decree,”  an order drawn up by the head of the national government, only on March 11, some two and a half weeks after the initial reaction that focused on just a few hotspots in the Lombardy and Veneto Regions.

A process of escalation ensued in which additional measures were added repeatedly, as it became clear that the contagion was not at all under control.

So, until just a few days ago — and to a certain extent even now — the lockdown basically relied on people acting responsibly. This was a problem at the beginning in particular, because the message was muddled. Many people claimed that panic was worse than the virus itself, with various politicians and even some medical professionals saying “it’s just the flu.” And this didn’t come mostly from “populists” or “conspiracy theorists,” but from center-left political figures who branded calls to quarantine people arriving from China as racist, or cavalier professionals who figured this was just another example of people getting freaked out without taking a serious look at the data. 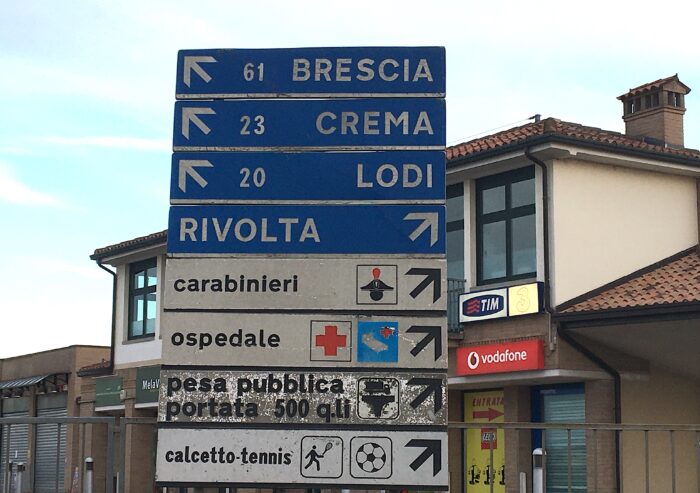 Signs for  road to Lodi and Crema, the area of the first known outbreak in Italy. (Andrew Spannaus)

That’s over now. The reality, which competent officials had tried to impress from the beginning, is that the health system is being overwhelmed. In Lombardy, the richest and most populous region in the country, there aren’t enough intensive-care beds to treat those who need serious medical attention. Dozens of people are now being transferred to other regions by ambulance or plane, and a crash program is underway to build a temporary hospital in the buildings of the Milan trade fair. More doctors and nurses are needed, and there aren’t enough protective masks and respirators. The system is on the brink, and if things get significantly worse in other regions, it could go over the edge.

There are already cases of hospitals having to choose among patients based on age and probability of survival, while a protocol is reportedly being drawn up that essentially sets an age cut-off of 80 for intensive care treatment once the hospital system reaches capacity; triage is returning to its meaning in times of war.

Amid all this, testing is still not wide scale, with authorities usually citing the lack of available resources. For example, even after two cases of COVID-19 were found at a microelectronics company that employs more than 5,000 people here in Lombardy, the company has continued production shifts and not tested workers. Indeed there is still no requirement to do so, and no distribution of test kits. But if you want to stop the spread, it would seem smart to figure out who has the virus now, wouldn’t it? South Korea took this approach, with a success that other countries haven’t had yet.

For most people, the virus seems to be a mere inconvenience though, a far cry from the plagues or wars of our ancestors. We have to stay at home, deal with kids’ pent-up energy, and wait in line to get into the grocery store; all while constantly attached to our phones and computers, of course. Initially some people hoarded items from supermarkets but in general there are no shortages of food or other items in stores.

The average age of those who die here is slightly above 80, and although younger people do get sick, the likelihood of serious consequences is low enough that generally healthy people don’t feel particularly threatened. This contributed to the dangerous initial reaction claiming the virus really isn’t that bad.

While it might not bother those who take a Malthusian view of humanity, in today’s society we can’t simply accept the idea that our parents and grandparents are at risk of early death due to a new disease.

Indeed, as the number of victims rises, attitudes are changing. A man who lives in a building just behind my house is hospitalized, and the mother of a friend of mine from Bergamo passed away two days ago. It’s no longer an abstract threat. As deaths rise in some areas, funerals are prohibited.

The situation raises all sorts of questions regarding the health systems of advanced countries. People love to say that Italy has an excellent system, but that’s not very reassuring when there aren’t enough ventilators — only one company here produces them — or masks, which are just now starting to arrive from… China.

As in the United States, the issue of economic security is coming to the forefront. How safe are we if we depend on a fragmented global supply chain for essential needs? The need to rebuild our manufacturing base after the loss of jobs due to the outsourcing of production to low-cost countries was already a general topic of discussion. Now the question of maintaining essential industries becomes even more evident.

So is the question of budget cuts, even in a system considered to maintain a high level of care overall. In order to comply with the European Union budget criteria, Italy has undergone several waves of austerity over the past 30 years. In just the past 10 years, the country has lost over 70,000 hospital beds, and now its beds-per-capita figure is half that of France and 40 percent of the level in Germany. Health spending has increased in absolute terms, but in reality, every year the state allocates less money than is estimated to meet the needs of an aging population. In the general context of seeking “savings” and increasing “efficiency,” the number of intensive care beds per capita — a key factor in today’s crisis — has fallen by 60 percent since 1990. 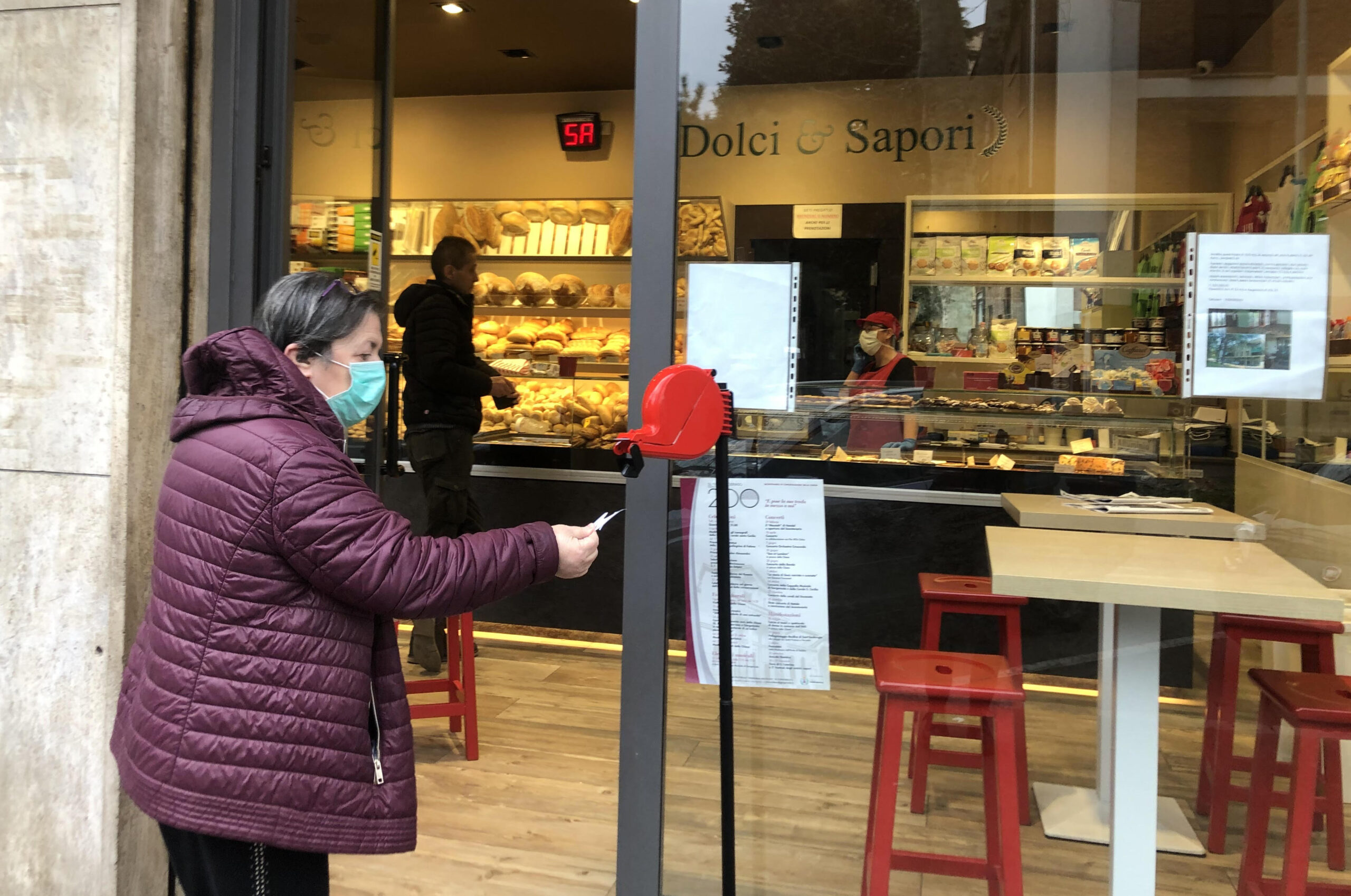 Shopper takes a number to enter a bakery in Gorgonzola, Italy.
(Andrew Spannaus)

Nation States or the EU

Speaking of the European Union, there’s the question of the attitude of other European countries toward Italy. At the beginning, it wasn’t exactly empathetic. France, Germany and the Czech Republic initially blocked the export of masks to Italy, and there were plenty of memes circulating about the dirty, lazy Italians. That’s over now, too, as it has rapidly become clear that everyone’s in the same boat, just at different points along the curve.

Yet we can’t avoid talking about the political implications for Europe. What has become abundantly clear, as I argued in my book “Original Sins: Globalization, Populism, and the Six Contradictions Facing the European Union” last year, is that when push comes to shove, decisions are still made by nations, not supranational bureaucracies.

First of all, national governments know the situation in each country, and have the responsibility and legitimacy to act; second, the European Union is based on an economic conception that is entirely inadequate to deal with the real problems of today’s world. It was constructed to further the policies of globalization, and has done so by promoting austerity and deregulation, producing not only a decline in the living standards of the middle class, but a crushing blow to the infrastructure preparedness of many of its members. An economy based on mechanisms which extract value from the productive economy to fuel short-term financial speculation, is inherently unable to guarantee the safety and wellbeing of its citizens — on both sides of the Atlantic.

A few countries have profited from the Euro system (Germany and The Netherlands, in particular), but for most, it had negative economic effects. Now, on top of that, in order to spend money to face this crisis countries have to get permission from Brussels.

Here again, it is abundantly clear that national governments have to take the initiative, and indeed the EU is demonstrating its lack of credibility in spectacular fashion, such as when European Central Bank head Christine Lagarde said last Thursday that she has no responsibility to help countries such as Italy avoid a state bond crisis in this situation.

Today’s political institutions are clearly unprepared for this crisis, yet it was far from unpredictable. Many have warned about the risk of new diseases, not to mention how often we have heard of the threat of biological warfare.

Part of the problem is that our society has reached a level of progress that makes people think that we are immune from the type of crises that have affected humanity over centuries and millennia. Once again, reality is asserting itself, and showing that no, we are not at The End of History. It’s time to re-think what it means to be prepared to face threats, and what type of political and economic institutions we need to do so.

Andrew Spannaus is a journalist and political analyst based in Milan. His latest book is “Original Sins. Globalization, Populism, and the Six Contradictions Facing the European Union,” published in May 2019.

5 comments for “COVID-19: Pandemic Memo to CN from Italian Hot Spot in Lombardy”