Ben Norton reports on the passage of a bipartisan bill that further intensifies the U.S. attack on the Ortega government and received no coverage in the English-language corporate media. 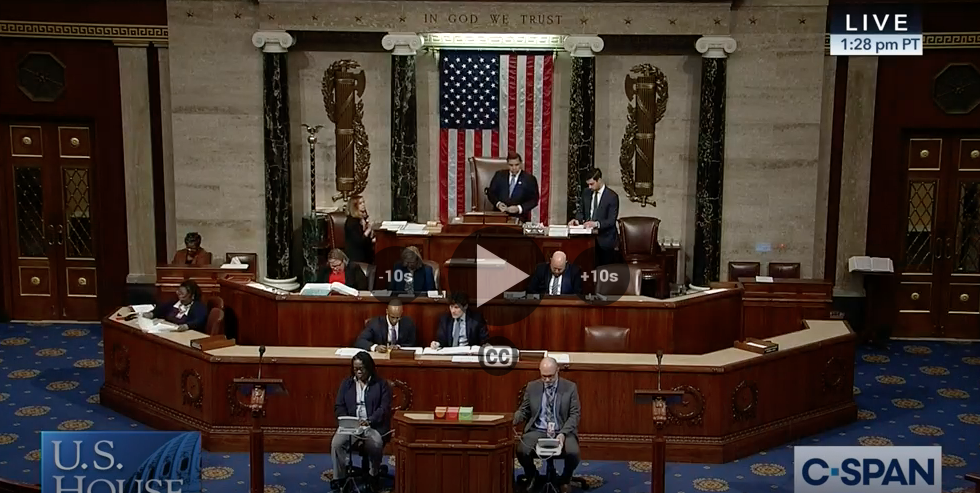 As the Trump administration’s year-long coup attempt against Venezuela spirals out in failure, the U.S. government has taken aim at Nicaragua with increasing ferocity, in a bid to topple its democratically elected, leftist Sandinista government.

Washington’s pressure escalated further on March 9 when the U.S. House of Representatives passed a bipartisan resolution in a voice vote without any opposition that demanded more sanctions and aggressive actions against the Nicaraguan government of President Daniel Ortega.

This bill — which received no coverage in the English-language corporate media — refers to Nicaragua’s elected government as the “Ortega regime,” echoing the bellicose rhetoric of the right-wing opposition.

Video of the congressional session shows that the resolution was pushed through on a voice vote in just around eight minutes. There was no debate, and a grand total of zero members of Congress spoke in opposition.

The regime-change action in the House followed numerous rounds of suffocating U.S. sanctions on Nicaragua, a small Central American country of just around 6 million people.

In fact, the behavior of U.S. legislators in the latest vote mirrored one in December 2018, when not one member of Congress spoke up against the passage of the Nicaraguan Investment and Conditionality Act (NICA). That bill hit Nicaragua with crippling economic restrictions, preventing international financial institutions from providing loans or assistance to the country’s government.

U.S. sanctions have already caused the deaths of tens of thousands of civilians in Venezuela and Iran. Now that Nicaragua is in the crosshairs, the damage of Washington’s economic warfare has only just begun. 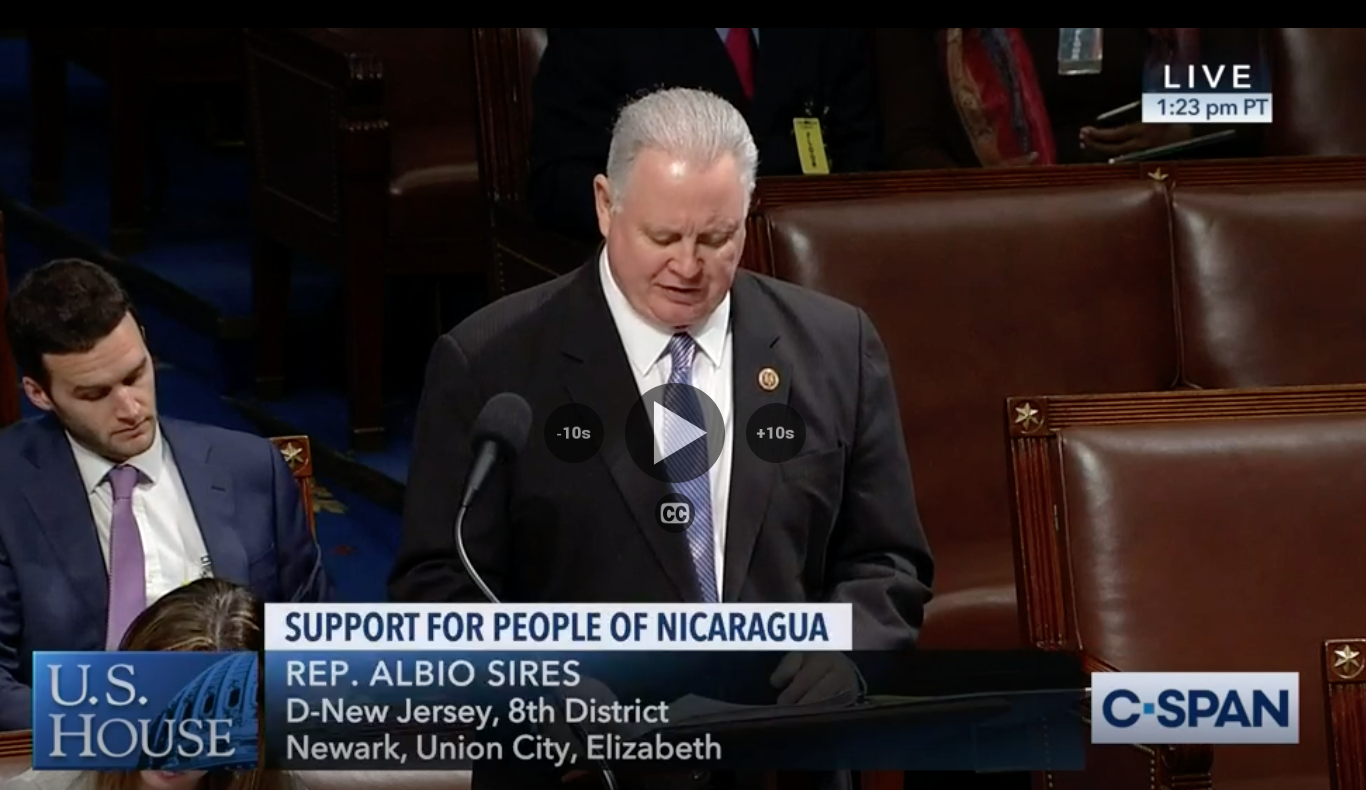 The latest regime-change bill passed against Nicaragua, H.Res.754, was introduced in December 2019 by Representative Albio Sires, a Cuban-American Democrat from New Jersey.

The bill “urges the United States Government to continue to apply pressure on the Ortega government and consider additional sanctions against those Nicaraguan officials” accused by Washington of human rights abuses or corruption.

The resolution goes on to “urge the international community to hold the Ortega government accountable” and “restrict its access to foreign financing.”

Included in the bill is language demanding the Nicaraguan government “immediately release all political prisoners without conditions.”

However, the Sandinista government has already released hundreds of people on its “political prisoner” list, acceding to pressure from the Nicaraguan opposition and its sponsors in the U.S. and the Organization of American States. As The Grayzone reported, this list contained the names of numerous violent criminals who had previously carried out murders and rapes, and resulted in the release of an opposition hooligan who went on to stab his own pregnant girlfriend to death.

The U.S. congressional resolution also expressed support for right-wing Nicaraguan opposition organizations, media outlets, and civil society groups, many of which are funded by the U.S. government.

The House’s unanimous approval of this regime-change legislation arrived just four days after the Trump administration imposed another round of sanctions targeting Nicaraguan state institutions.

On March 5, the U.S. embassy ramped up the pressure with a security alert in Nicaragua, imposing travel restrictions on embassy personnel and advising them to stay away from demonstrations and “large groups or barricades.”

The alert was both a tacit admission that the barricades the opposition had erected around the country posed a threat to the safety of all people, including U.S. citizens, as well as a portent of the chaos and violence that Washington apparently aimed to resuscitate in its bid to topple Nicaragua’s government.

Today’s sanctions on the Nicaraguan National Police and three commissioners take aim at one of the main tools the Ortega regime uses to violently repress the people of #Nicaragua. We will continue to promote accountability of the regime for #HumanRights abuses.

The main sponsor of the new sanctions bill against Nicaragua, Albio Sires, is a former Republican who previously ran for Congress as a member of the GOP. He changed his party affiliation and went on to fill the former seat of Democratic Cuban-American hardliner Bob Menendez when he entered the Senate.

Like many elite Cuban-Americans, Sires’s family fled to the U.S. after the Cuban revolution, which removed Cuba’s right-wing, U.S.-backed dictator Fulgencio Batista from power.

In Congress, Sires has been a stalwart opponent of Latin America’s leftist governments, teaming up with Republican hawks from Marco Rubio to Ted Cruz to Ileana Ros-Lehtinen to destabilize them.

Sires has relentlessly clamored for regime change in Cuba. He staunchly opposed the Obama administration’s partial normalization of relations with Cuba, describing his “plans for a loosening of sanctions” as “naïve and disrespectful to the millions of Cubans that have lived under the Castro’s repressive regime.”

Early on in the Trump administration’s coup attempt against the leftist Chavista government in Caracas, Sires recognized unelected coup leader Juan Guaidó as “the constitutionally legitimate Interim President of Venezuela.” Soon after, Sires met with Guaidó’s wife, describing her as “Venezuelan First Lady Fabiana Rosales.” Meanwhile, he proclaims on official social media accounts, “Maduro and his thugs must go.”

Since the failure of a violent U.S.-backed coup attempt in Nicaragua in 2018, Sires has been one of the main figures in Congress pushing for aggressive measures to topple the Sandinista government. He was a co-sponsor of the Nica Act, and took the lead in the latest regime-change resolution.

After Albio Sires introduced the bill, it was referred to the House Committee on Foreign Affairs, where it was very slightly amended and then discussed on the House floor on March 9.

But no debate ensued. The only other member of Congress who spoke during the allotted period was right-wing Florida Republican Ted Yoho, who expressed his staunch support for the resolution.

After tirades against the Nicaraguan “regime” by Sires and Yoho, the House speaker pro tempore quickly moved on to a voice vote. A small handful of members declared “Aye” in support. Not one representative said no. It was all over in eight minutes.

In a triumphant statement from his office, Sires declared that the resolution “sent a strong, bipartisan message.”

Once again, potentially lethal sanctions on an impoverished nation fighting to develop itself and provide for its people were passed in broad daylight, on a Monday afternoon, and not one member of Congress spoke up against it.