No surprise here, says Caitlin Johnstone. This is just the latest move to erase a candidate who challenges bipartisan support for endless wars. 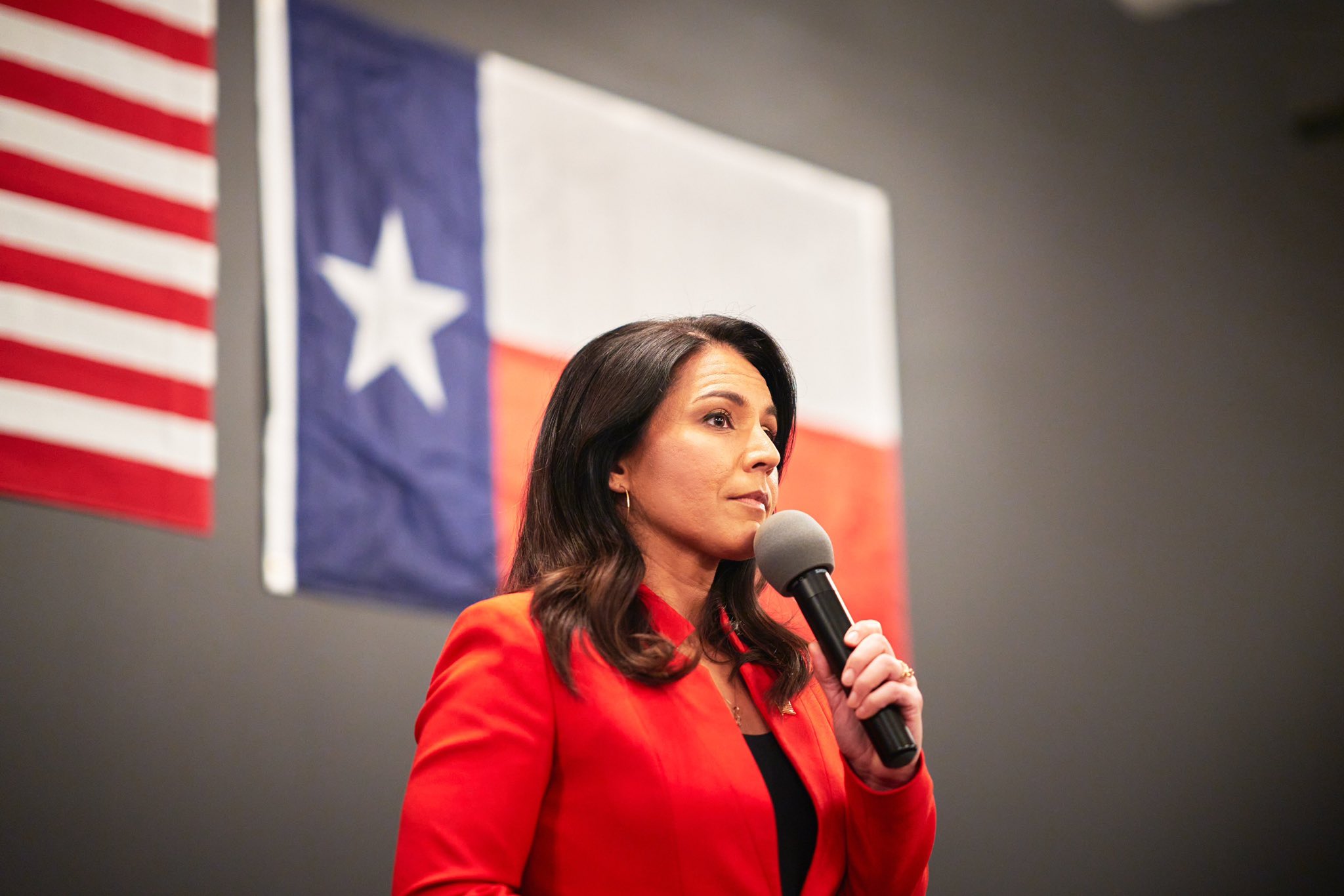 On a CNN panel on Monday, host John King spoke with Politico reporter Alex Thompson about the possibility of Democratic presidential candidate Tulsi Gabbard qualifying on Super Tuesday for the party’s primary debate in Phoenix later this month.

“I will note this, she’s from Hawaii,” King said of Gabbard. “She’s a congresswoman from Hawaii; American Samoa votes on Super Tuesday. The rules as they now stand, if you get a delegate, you’re back in the debates. As of now. Correct?”

“Yeah, they haven’t, I mean, that’s been the rule for every single debate,” Thompson replied. “And the DNC has not released their official guidance for the March 15 debate in Phoenix, but it would be very obvious that they are trying to cancel Tulsi, who they’re scared of a third party run, if they then change the rules to prevent her to rejoin the debate stage.”

And indeed, as the smoke clears from the Super Tuesday frenzy, this is precisely what appears to have transpired.

Watch it til the end.https://t.co/SMU5NhCDUo

“The Gabbard campaign said it was informed that it would net two delegates from the caucuses in American Samoa, which will allocate a total of six pledged delegates,” The Hill reported. “However, a report from CNN said that the candidate will receive only one delegate from the territory on Tuesday evening.”

“If Tulsi Gabbard gets a delegate out of American Samoa, as it appears she has done, she will likely qualify for the next Democratic debate,” tweeted The Washington Post‘s Dave Weigel. “We don’t have new debate rules yet, but party has been inviting any candidate who gets a delegate.”

Rank-and-file supporters of the Hawaii congresswoman enjoyed a brief celebration on social media, before having their hopes dashed minutes later by an announcement from the DNC’s Communications Director Xochitl Hinojosa that “the threshold will go up.”

“We have two more debates — of course the threshold will go up,” tweeted Hinojosa literally minutes after Gabbard was awarded the delegate. “By the time we have the March debate, almost 2,000 delegates will be allocated. The threshold will reflect where we are in the race, as it always has.”

“DNC wastes no time in announcing they will rig the next debates to exclude Tulsi,” Journalist Michael Tracey tweeted in response.

DNC wastes no time in announcing they will rig the next debates to exclude Tulsi https://t.co/7iLgaILb6e

This outcome surprised nobody, least of all Gabbard supporters. The blackout on the Tulsi 2020 campaign has reached such extreme heights this year that you now routinely see pundits saying things like there are no more people of color in the race, or that Elizabeth Warren is the only woman remaining in the primary. They’re not just ignoring her, they’re actually erasing her. They’re weaving a whole alternative reality out of narrative in which she is literally, officially, no longer in the race.

After Gabbard announced her presidential candidacy in January of last year I wrote an article explaining that I was excited about her campaign because she would severely disrupt establishment narratives, and, for the remainder of 2019, that’s exactly what she did. She spoke unauthorized truths about Syria, Afghanistan and Saudi Arabia; she drew attention to the plight of Julian Assange and Edward Snowden and said she’d drop all charges against both men if elected; she destroyed the hawkish, jingoistic positions of fellow candidates on the debate stage and arguably single-handedly destroyed Kamala Harris’ run.

The narrative managers had their hands full with her. The Russia smears were relentless, the fact that she met with Syrian President Bashar al-Assad was brought up at every possible opportunity in every debate and interview, and she was scoffed at and derided at every turn.

Now, in 2020, none of that is happening. There’s a near-total media blackout on the Gabbard campaign, such that I now routinely encounter rank-and-file liberals on social media who tell me they honestly had no idea she’s still running. She’s been completely redacted out of the narrative matrix.

All candidates of color are out. An openly gay married candidate is out. 2 women left. The rest? 70+ old white men fighting for the future of America in 2020. Because of course.

So, it’s unsurprising that the DNC felt comfortable striding forward and openly announcing a change in the debate threshold literally the very moment Gabbard crossed it. These people understand narrative control, and they know full well that they have secured enough of it on the Tulsi Problem that they’ll be able to brazenly rig her right off the stage without suffering any meaningful consequences.

The Establishment narrative warfare against Gabbard’s campaign dwarfs anything we’ve seen against Sanders, and the loathing and dismissal they’ve been able to generate have severely hamstrung her run. It turns out that a presidential candidate can get away with talking about economic justice and plutocracy when it comes to domestic policy, and some light dissent on matters of foreign policy will be tolerated, but aggressively attacking the heart of the actual bipartisan foreign policy consensus will get you shut down, smeared and shunned like nothing else. This is partly because U.S. presidents have a lot more authority over foreign affairs than domestic, and it’s also because endless war is the glue which holds the empire together.

And now they’re working to install a corrupt, right-wing warmongering dementia patient as the party’s nominee. And from the looks of the numbers I’ve seen from Super Tuesday so far, it looks entirely likely that those manipulations will prove successful.

All this means is that the machine is exposing its mechanics to the view of the mainstream public. Both the Gabbard campaign and the Sanders campaign have been useful primarily in this way; not because the Establishment would ever let them actually become president, but because they force the unelected manipulators who really run things in the most powerful government on earth to show the public their box of dirty tricks.

← THE ANGRY ARAB: The Lessons of the Taliban
Afghanistan: ‘Thank Allah We’re Out of That Quagmire’ →