Left out of the frame of U.S. military strategists is the certainty of mass human suffering, a reality forgotten since the days of the Vietnam War, wrote former U.S. intelligence analyst Elizabeth Murray back in Aug. 2012.

In late 2002, just prior to the launch of the U.S. “shock and awe” campaign against Iraq, I was invited to join a gathering of intelligence analysts at the U.S. Army War College in Carlisle, Pennsylvania, to participate in an Iraq “war games” exercise. We were assigned specific roles and asked to “play out” various political and diplomatic scenarios that might unfold in the wake of a U.S. attack on Iraq.

A tall, heavy-set Iraqi-American, who was present as an observer and seated beside me on the final day, remarked quietly: “All these people are talking about strategic, political and military issues; no one here is talking about the hundreds of thousands of people — my people — that are going to die.” 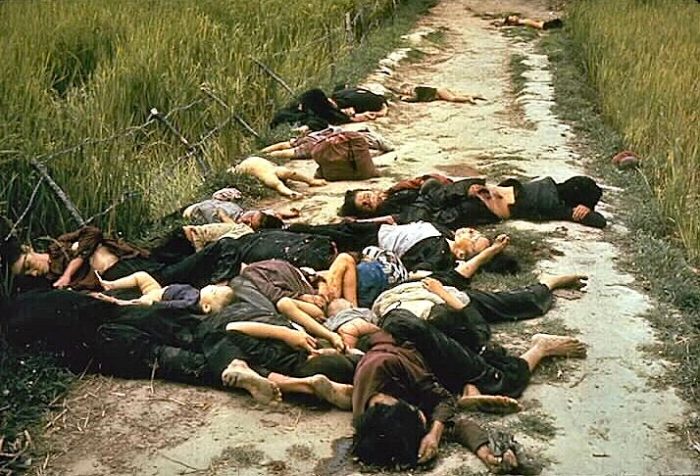 The bodies of Vietnamese men, women and children piled along a road in My Lai after a U.S. Army massacre on March 16, 1968. (U. S. Army photographer Ronald L. Haeberle)

His words struck me as profoundly tragic, and the tears welling up behind his dark glasses made me feel suddenly ashamed to be there, aware of the complete absence of consideration for Iraqis. I struggled to find something to say that would console the man, but found myself at a loss.

All these years later, that incident has come back to haunt me as we approach the precipice of yet another deadly war. Will we allow ourselves to be blinded again?

As Israeli leaders engage in frenzied posturing over a possible military strike on Iran, we again have pundits, experts and commentators speculating how an Israeli offensive would play out. They search for the meaning behind the inflammatory rhetoric of Defense Minister Ehud Barak and Prime Minister Benjamin Netanyahu, and ponder the impact of a war on Western political, strategic and economic interests.

As with the war games I attended at the War College 10 years ago, their narrow focus on strategic and tactical aspects of a potentially serious conflict conveniently avoids the fact that we are talking about the mass murder and maiming of Iranian civilians, as well as many others in the region.

Attack on Bushehr: ‘Death of Thousands’

In a thought-provoking piece on this subject, Professor Marsha B. Cohen, a specialist on Iranian-Israeli issues, notes that a 114-page paper commissioned in 2009 by the Center for International and Strategic Studies, “Study on a Possible Israeli Strike on Iran’s Nuclear Development Facilities,” devoted just two pages to the subject of anticipated human losses (pp 90-91).

The study says that “any strike on the Bushehr nuclear reactor will cause the immediate death of thousands of people living in or adjacent to the site, and thousands of subsequent cancer deaths or even up to hundreds of thousands depending on the population density along the contamination plume,” adding that “Bahrain, Qatar and the United Arab Emirates will be heavily affected by the radionuclides. “

In other words, the paper acknowledges that since the spread of nuclear radiation does not stop at national borders, civilian populations throughout the region, including those of U.S. allies, will be forced to suffer the horrific consequences of any Israeli military adventures in Iran.

The paper charts the range of human suffering and death from radiation according to the degree of exposure, ranging from 0-50 Roentgens — “no obvious effect, possibly minor blood changes,” all the way to 5,000 Roentgens — “incapacitation almost immediately; all those exposed will be fatalities within one week.” An accompanying map of the region displays prevailing wind patterns, indicating where the radiation is likely to drift.

Without further discussion of the humanitarian dimension, the next page goes on to talk about the varying technical attributes of the Israeli and Iranian missile systems.

Why is it that U.S. policymakers and those in the intelligence agencies and think-tank communities who support them seem to have so little compassion for the victims of their political and military decisions? Have they become too far removed from suffering, as they are shuttled from meeting to meeting in their chauffeur-driven SUV’s and Town Cars?

The subject of human suffering is almost taboo among these elites, and is generally raised only when negative media publicity, or the prospect thereof, forces them to take action.

Does the mainstream news media encourage a culture of war that conditions its citizens not to think about the human suffering of foreign citizens? Could it be that our corporate-controlled media do not want Americans to care about the fact that the bodies of men, women and children in Iran will be torn apart by the massive bombings, air attacks, or deteriorate slowly and painfully from radiation-related sicknesses that will accompany exposure to depleted uranium from “bunker buster” bombs?

When was the last time that footage of the dead and wounded from the wars in Iraq, Afghanistan or Pakistan came across the television screen? Even for those Americans who seek out alternative media sources, chances are that the WikiLeaks airing of the now-famous “Collateral Murder” video may have been the first — and possibly last — exposure to the brutality and outright criminality of these wars.

The fact that such a program would be aired in Germany, where it had unusually broad and intense resonance, but not in the United States says a great deal about the self-censorship that now pervades the U.S. news media when it comes to the death and destruction caused by American warfare.

The U.S. news media was not always so reticent about showing the bloody realities of war. When U.S. television aired graphic, prime-time images of wounded American soldiers and terrified villagers in Vietnam, Americans responded by forming a massive anti-war movement that eventually forced an end to the conflict in Southeast Asia.

Neocon pundit Norman Podhoretz, a vigorous supporter of the Vietnam War as well as the wars in Iraq and Afghanistan, was disgusted by the U.S. withdrawal from Southeast Asia and believed it was necessary for American society to get over the “Vietnam Syndrome” — namely, what he termed “the sickly inhibitions against the use of military force.”

(A principal public-relations goal of the Reagan and Bush-41 administrations was to cure the American people of this “Vietnam Syndrome,” a process that progressed through the small wars of the 1980s, like the invasion of Grenada, to the mid-sized invasion of Panama to the larger-scale Persian Gulf War against Iraq. After the slaughter of that 100-hour ground war ended, President George H.W. Bush declared, “By God, we’ve kicked the Vietnam Syndrome once and for all.”) 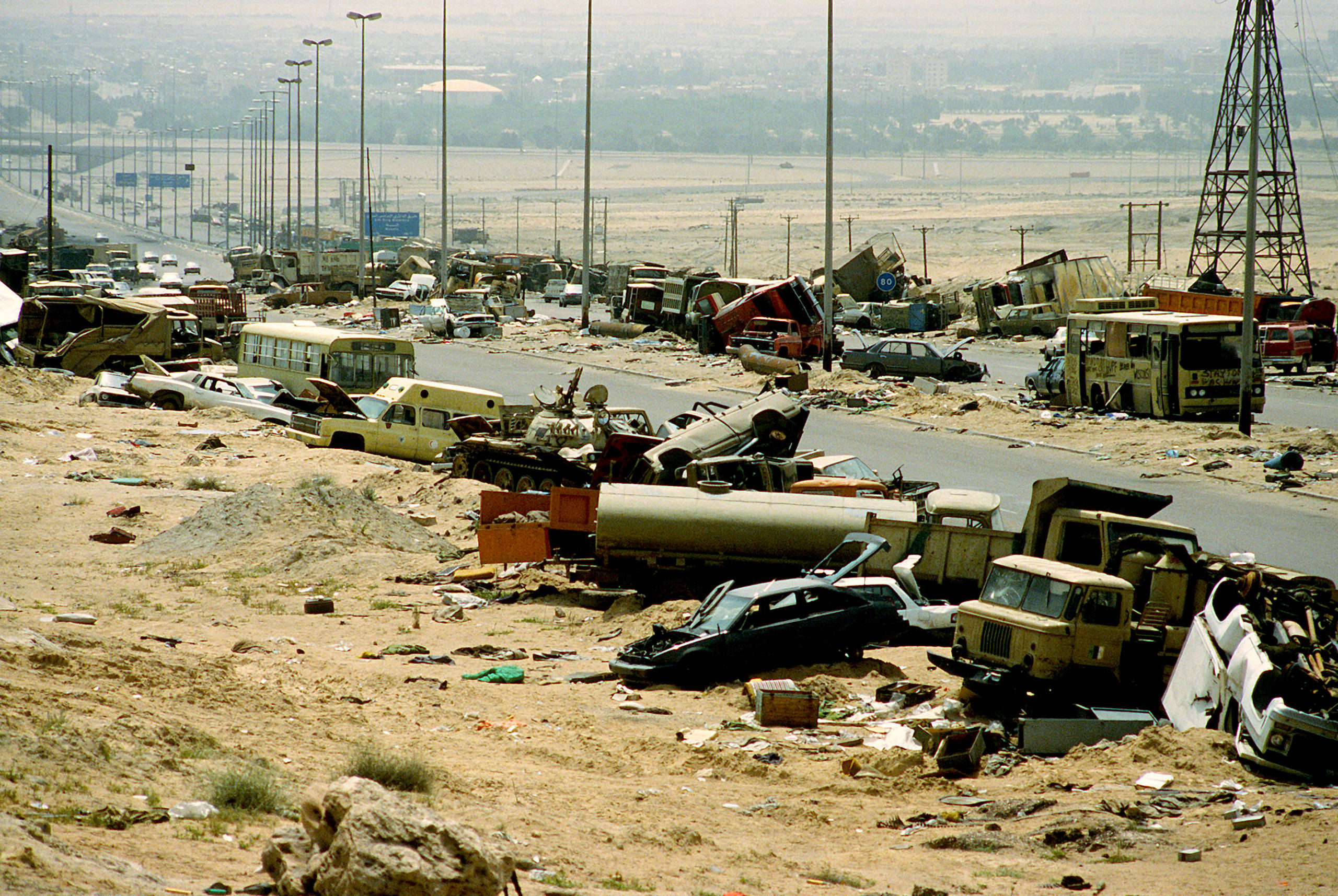 The Highway of Death, Iraq, 1991, US fired on retreating Iraqis. (Flickr)

Since the post-9/11 launch of U.S. wars in Afghanistan and Iraq, the corporate-controlled mainstream media has been remarkably successful at keeping the realities of war away from the TV screens. News executives have heeded the complaints of war hawks complaining about “unpatriotic” coverage of war and have clamped down tightly on images that might turn public opinion against war.

Until recently, this censorship of war casualties included a prohibition on the broadcasting of images of military coffins arriving at Dover Air Force Base. Ignoring the grim realities of war also has allowed for its glamorization through television programs such as “Stars Earn Stripes.”

The absence of pro-peace voices in the mainstream media also has contributed to isolating Americans from the realities of war, stoking irrational fears, and contributing to the dehumanization of the victims of war as the faceless “Other.”

The value of compassion for our fellow humans is often portrayed as weakness in mainstream media discourse – a development that must give immense satisfaction to Podhoretz and others of his ilk who railed against the “sickly inhibitions” against violence that infected Americans after the Vietnam War.

As the stakes rise for U.S. involvement in a reckless and ill-advised Israeli military adventure against Iran, let us not forget that those who advocate such wars are almost always comfortably ensconced in locations and lifestyles that ensure they will never have to see a battlefield, a mangled corpse, or a deformed child in their lifetime.

← The USA’s Slavish Saudi Allegiance Against Iran
The Assassination of Qassem Soleimani: What Would Crassus Say? →

60 comments for “The Human Cost of War on Iran”