Jeremy Corbyn lost the U.K. election but progressive Mexican leader Andres Manuel Lopez Obrador, has been in power for one year. He is carrying out the plans described in his 2018 book “New Hope for Mexico,” writes Rick Sterling.

With 129 million people, Mexico is the 10th most populous country in the world. It has the largest population of any Spanish speaking country and is twice the size of the United Kingdom.

Mexico is in a period of profound change. President Andrés Manuel López Obrador (AMLO) and the Morena Party are charting a dramatically new path for the country.

From 2000 to 2005 Lopez Obrador was head of government for Mexico City. He left office with an 84 percent approval rating, according to one study, having implemented 80 percent of his campaign pledges. In 2006 he ran for the presidency as candidate of the PRD (Party of Democratic Revolution). The election was extremely controversial, with 49 percent of the population believing it was rigged against Lopez Obrador. Felipe Calderón was declared the winner.

Finally, in the 2018 election, AMLO decisively defeated the other candidates and his party, MORENA, won a majority in both the Chamber of Deputies and Senate. He assumed office on Dec. 1, 2018. 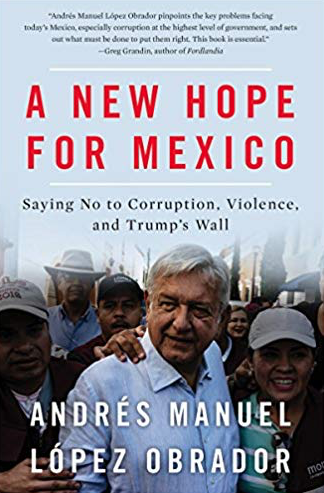 López Obrador analyzed Mexico’s problems and his solutions in the 2018 book “A New Hope for Mexico.” He describes how corruption and neoliberal politics have led to “rampant inequality, shocking poverty, frustration, resentment, hate, and violence.”

AMLO says, “In Mexico the governing class constitutes a gang of plunderers…the astounding dishonesty of the neoliberal period (from 1983 to the present) is wholly unprecedented.” He names the officials and oligarchs who have profited from privatizing public institutions. He describes how changes implemented under President Carlos Salinas even took away the right of children to free education.

López Obrador explains, “The first thing we must do is to democratize the state and retool it as an engine of political, economic and social growth. We must rid ourselves of the myth that development requires blind acquiescence to market forces… Mexico will not grow strong if our public institutions remain at the service of the wealthy elites.”

AMLO describes the decline of Mexico’s industrial infrastructure in the neoliberal period. Banks were bailed out while “neoliberal technocracy has led to partiality with respect to hiring, and always at the expense of unions. There have been massive waves of firings.”

AMLO describes ambitious plans: building sources of renewable energy and refineries to make the country energy self-sufficient; building a transportation corridor to move containers between the Atlantic and the Pacific Oceans; guaranteeing crop prices to enable food self-sufficiency; expanding tourism in the Caribbean, Mayan and Olmec regions; planting large areas with timber and fruit trees; giving loans to hundreds of thousands of small farmers; providing training and internships for youth.

He says that development is possible by cutting wasteful spending: “By cutting back on purchases of ships, planes and helicopters…[we will] sell those used by high ranking officials including the president; we will keep only those used for medical emergencies, security and public safety… The first priority must be serving the poor. Only through the creation of a just society will we achieve the revitalization of Mexico.”

He contrasts his goals for Mexico with those of the U.S., where the Trump administration has increased military spending while slashing spending on housing, transportation and education.

López Obrador believes neoliberal economic policies have been especially detrimental in villages and rural areas of Mexico. As a result of these policies, small farmers have lost their livelihoods and food imports have risen dramatically.  He writes, “The abandonment of our rural areas has taken a heavy toll on production, has increased migration, and fostered societal breakdown and violence.” 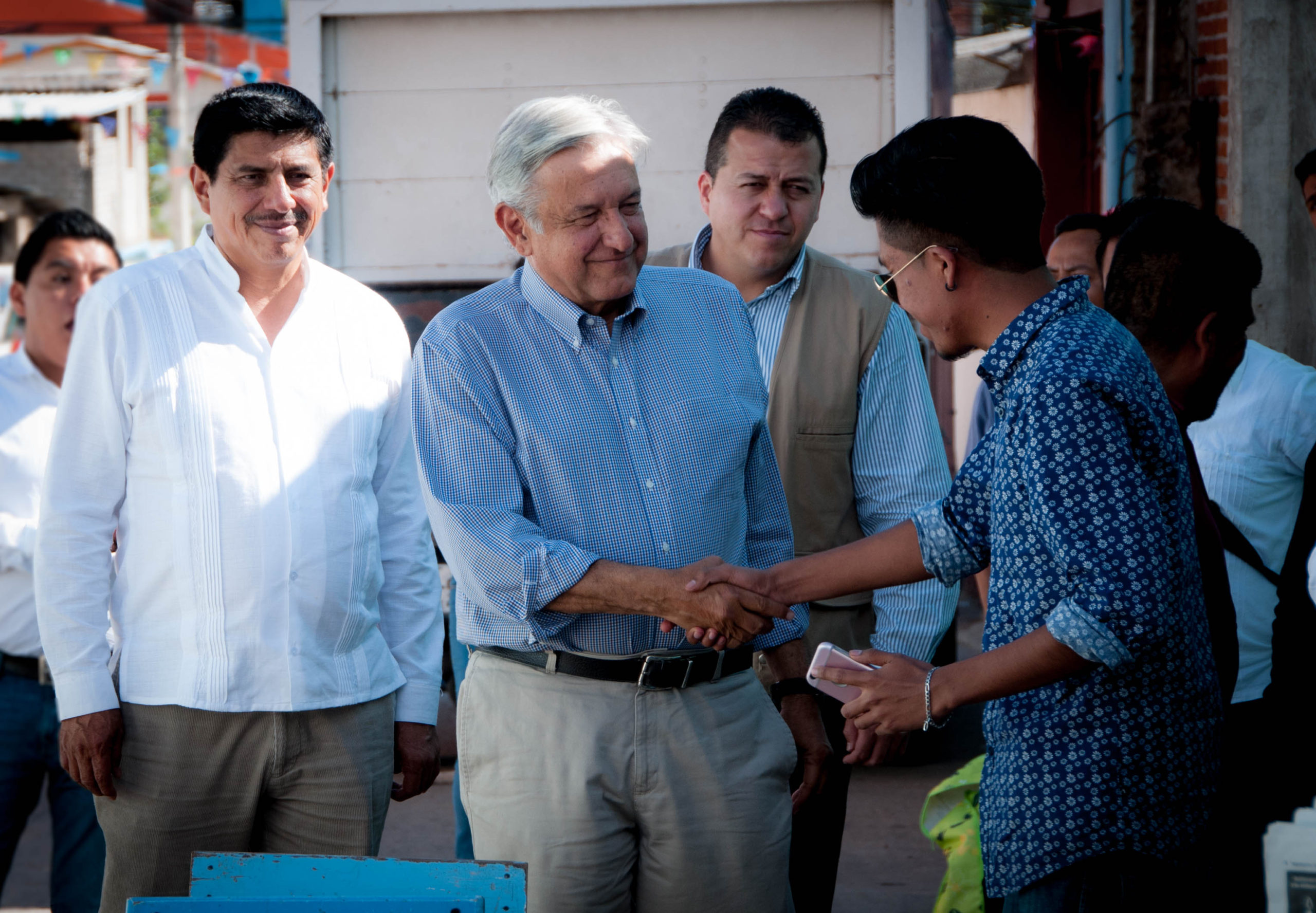 López Obrador says, “The crisis of public safety and violence that we face today is the product of a poorly conceived war on drugs that relies solely on coercive means. The security crisis that plagues Mexico is a result of a confluence of factors: poverty, injustice, and exclusion, aggravated by the inefficiency of the authorities and corruption within the police and the judiciary.”

He proposes to combat police and judicial corruption, to use the army and navy to protect public safety, to develop and utilize a National Guard, and to change laws regarding drug use. Above all, he emphasizes, it is necessary to provide positive alternatives for youth: “The belief that the deterioration of our social fabric can be combated only through use of force is profoundly wrong and highly dangerous, as Mexican history amply confirms.”

During his 2018 presidential campaign, López Obrador visited several U.S. cities to address Mexican Americans. His words are relevant for all Americans:

“We must convince and persuade those who were brainwashed by Trump’s campaign rhetoric… We must reach out to lower- and middle-class American workers, explaining that their problems are rooted in the poor distribution of income… We must raise awareness among Americans of good faith who have been tricked by the propaganda campaign against Mexicans and foreigners….”

One Year as President

After one year in office, the AMLO government has significant accomplishments: the minimum salary was dramatically increased while top government salaries and outlandish pensions were cut; small loans and grants are going directly to farmers; five key agricultural crops have a guaranteed price; the billion dollar gas-thieving cartel has been exposed and attacked; a $44 billion infrastructure plan has been launched; and programs to benefit youth, the disabled and elderly have begun.

AMLO sets an example of hard work and transparency. Each day begins with a 7 AM press conference broadcast on his twitter feed.  The presidential jet is up for sale and he flies on commercial airplanes. During this first year in office, he has not left the country but travels constantly within Mexico seeing the conditions of hospitals, schools, factories and the small cities and towns that make up so much of the country. The presidential palace has been opened to the public.

While AMLO has a 67 percent approval rating, and is steadily implementing his campaign pledges, there are challenges and opposition. The Mexican economy has been near recession throughout the year. The bond rating for the state-owned oil company (Pemex) has been downgraded so that investment loans will be more expensive. Some major development plans have significant opposition. For example, indigenous organizations have opposed the proposed Maya Train. In response, AMLO says the project will only go ahead if the people want it.

Violence is still a major problem. As analyst Kurt Hackbarth has written, “The Mexican right is cynically using a crisis of its own making in an attempt to destabilize AMLO, taking Mexico’s people as hostages.”

The MORENA majority in Congress plans to legalize marijuana and create a federal agency to regulate its sale. But as Hackbarth says, “Legalization and the targeting of cartel finances must go hand in hand with the slow but necessary work of reestablishing the presence of a social state that decades of savage capitalism have allowed to wither: education, health care, housing, arts and culture, dignified alternatives to cartel employment, and an urgent redistribution of wealth…” These goals are precisely what is outlined in AMLO’s book and seemingly where he wants to go.

The changes in Mexico are also important on the international stage. Through most of the 20th century Mexico had a foreign policy of non-intervention and independence from Washington. They maintained relations with Cuba, supported the Sandinistas in Nicaragua, and broke relations with the Pinochet coup government in Chile. But in recent decades Mexican foreign policy has been subordinate to Washington. With AMLO and the MORENA Party in power, Mexico is returning to a foreign policy based on independence, self-determination and non-interference.

The difference was important early this year when the U.S. and Canada tried to impose a new government on Venezuela. The subordinate Latin American countries went along with Washington. Mexico did not.

As the recent coup in Bolivia unfolded, President Evo Morales’ life was threatened. Mexico sent a plane for his escape and granted him asylum. AMLO said to a huge crowd, “Evo was the victim of a coup d’etat! And from Mexico, we tell the world, ‘Yes to democracy, no to militarism!'”

Both internally and internationally, a new and hopeful process is happening in Mexico.

Rick Sterling is board president of Task Force on the Americas, a 35 year old anti-imperialist human rights organization focused on Latin America and the Caribbean. The original version of this article was published in TFA Report.

← Thank You for Your 2019 Tax Deductible Donation to an Internet Pioneer; Our Winter Fund Drive Continues
Come Free Me →