We like to think of journalists as plucky truth-tellers standing up to power, writes Alan MacLeod. In reality, most are parts of enormous corporate machines with their own agendas. 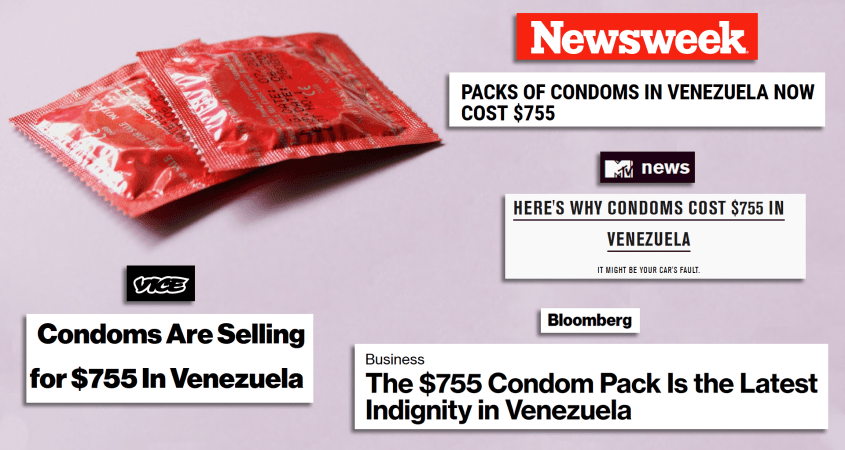 It is clear that mainstream U.S. media correspondents are no fans of the Venezuelan government. But rarely do you hear them speak so openly about their biases.

One Caracas-based correspondent now working for The New York Times told me on the record that he employs “sexy tricks” to “hook” readers on dubious articles demonizing the socialist government of Venezuela.

Anatoly Kurmanaev made this revealing comment and many more during an interview I conducted with him for my PhD and book on the media coverage of Latin America.

At the time, he was a correspondent for Bloomberg, and had just published a very dubious story on how condoms supposedly cost $750 per pack in Venezuela. The misleading article was picked up and repeated across the media.

Describing himself and his colleagues as “mercenaries,” Kurmanaev was unabashed, boasting on tape that he essentially grossly exaggerates stories in the media.

“A couple of times from my experience you try to use, I wouldn’t call them ‘cheap tricks’, but yeah, kind of sexy tricks. Just last week we had a story about condom shortages in Venezuela. At the official exchange rate condoms were at like $750 or something and the headline was something like ‘$750 condom in Venezuela’ and everyone clicks it, everyone is like ‘Jesus, why do they sell it for like $750?’” he said.

Kurmanaev emphasized that his goal was to “hook” readers into a larger story about Venezuela’s purported demise under socialism. 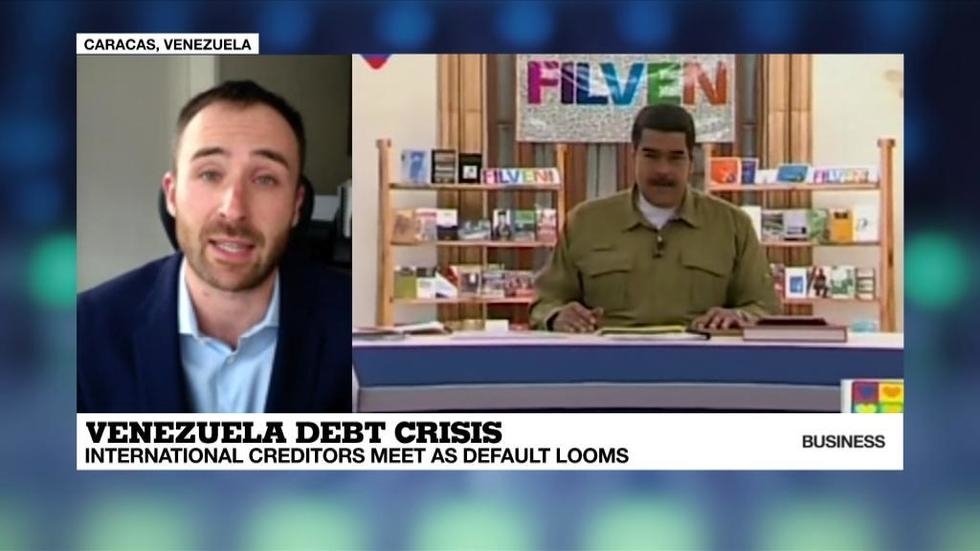 “Once you click,” the reporter said, “the average reader is hooked and he’ll read about really important issues like HIV problems in Venezuela, teenage pregnancies, the social impact of lack of contraception, the public health impact, things that I do feel are important to tell the world. But you have to use sexy tactics for it.”

We like to think of journalists as plucky truth-tellers standing up to power. But this notion is horribly antiquated; in reality, most journalists are parts of enormous corporate machines with their own political interests and agendas, often directly linked to those of the U.S. government.

And where Washington has skin in the game, a way to quickly advance in the field is to parrot American government positions, regardless of the facts.

One example of this is Venezuela, where the embattled socialist government of Nicolás Maduro is attempting to govern in the face of crushing U.S. sanctions that are estimated to have killed more than 40,000 civilians from 2017 to 2018 alone.

The United States has labeled Venezuela’s government a “dictatorship” and part of a “troika of tyranny,” and has sponsored multiple coup attempts there, including one in November.

The corporate media has dutifully ignored the U.S. role in the country’s economic woes, laying the blame squarely at the feet of Maduro, omitting crucial political context on Venezuela’s economic crisis while keeping up a constant flow of content presenting the country as a socialist hellhole.

Don’t you know a hamburger costs $170 there? Well, no, that story was retracted. But condoms cost $750! Also no — we don’t learn until the ninth paragraph of Kurmanaev’s article that a pack of condoms actually cost about the same as it did in the U.S. at the time.

That latter piece of pseudo-news is based on deliberate distortions of the country’s admittedly byzantine currency regulations and has the effect of demonizing the government and socialism in general, advancing the idea that “something must be done” to help them.

Are we to believe that the journalists who deploy these “sexy tricks” don’t know exactly what they are doing?

On the back of his coverage of Venezuela, Anatoly Kurmanaev has risen rapidly through the ranks of his industry to a post at the supposed newspaper of record, The New York Times, whose editorial board recently applauded the U.S.-backed military coup in Bolivia that ousted Evo Morales.

Generals appeared on television demanding the newly re-elected Morales step down. Their handpicked replacement Janine Añez immediately pre-exonerated security forces of any crimes in the “re-establishment of order,” leading to massacres of dozens of indigenous protesters.

In The New York Times, Kurmanaev soft-pedaled those events as Morales’ “resignation” – not the military coup that had unfolded in plain sight. According to the correspondent’s narrative, which conveniently echoed Washington’s official line, the ouster of Morales left a “power vacuum” that a reluctant Añez was forced to fill with a “transitional government.”

As the Bolivian junta cuts down and jails its opponents in droves, the Times has resorted to increasingly contorted language to avoid using the apparently forbidden term: “coup.”

“Violent protests over a disputed election that he claimed to win, and after he had lost the backing of the military and the police,” was the reporter’s most recent attempt to characterize the events that forced Morales from power.

In whitewashing a putsch and subsequent campaign of repression waged by avowedly racist, right-wing forces, Kurmanaev was far from alone. Across the mainstream spectrum, media outlets have welcomed the coup, framing the military’s ouster of an elected head of state as a “resignation” while downplaying the massacres as merely “clashes.”

Inside Bolivia, meanwhile, the oligarch-owned “sellout press” has been assisting in the roundup and suppression of alternative media.

As Grayzone contributor Wyatt Reed reported from La Paz, a crowd of journalists harassed and detained an independent reporter, handing him over to the death squads that have been terrorizing the country for the last two weeks, in retaliation for his refusal to tow the junta’s line.

Reed called this “a complete betrayal of what it is supposed to mean to be a journalist.”

Wow.
The whole time I've been in Bolivia I've heard about the "prensa vendida," aka the sellout press. Watch here as they harass an independent journalist, keep him from doing the job they *should* be doing, then hand deliver him to the army!
Anyone who shows this gets shut down. pic.twitter.com/wY5dwgu4lS

Añez’s forces have arrested and disappeared political and media opponents, “hunting down” the “animals” (their words) and forcing virtually every critical voice off the air.

In Venezuela the local media actually led the coup attempt against President Hugo Chávez in 2002. “Not one step backwards!” read the front page headline of El Nacional, one of the country’s most important newspapers. The headquarters of the putsch was at the mansion of Gustavo Cisneros, owner of the Venevisión TV network.

One coup leader appeared on television after what appeared to be a successful operation saying, “We were short of communications facilities and I have to thank the media for their solidarity and cooperation.”

Vice-Admiral Ramírez Pérez told Venevisión, “We had a deadly weapon: the media. And now that I have the opportunity, let me congratulate you.”

Due to budget cuts, the corporate press has outsourced their Latin America reporting to a collection of unabashed opposition activists.

Francisco Toro, for example, resigned from The New York Times claiming, “Too much of my lifestyle is bound up with opposition activism” that he “can’t possibly be neutral.” Yet Toro is now charged with providing commentary on Venezuela and Bolivia for The Washington Post.

Unsurprisingly, he supports the Bolivia coup and was “elated” when Chávez was overthrown.

Another local Washington Post contributor was Emilia Diaz-Struck, who founded the website Armando.info, an investigative news outlet that runs a constant stream of stories slamming the socialist government and advancing the opposition’s line.

These local reporters, who act as anti-government activists first and journalists second, greatly color the atmosphere of the newsroom, leading to a highly partisan hive mind where supposedly unbiased and neutral journalists unironically refer to themselves as the “resistance” to the government.

Those who do not run with the pack are generally made to feel unwelcome. Bart Jones, who covered Venezuela for the Los Angeles Times, told me that he felt he had to temper what he wrote because he knew exactly what his editors wanted.

“There was a clear sense that this guy [Chávez] was a threat to democracy and we really need to be talking to these opponents and get that perspective out there,” Jones recalled. One even told him “we have to get rid” of the government.

Matt Kennard, who covered Bolivia and Venezuela for The Financial Times(FT), explained how the political slant imposed by mainstream outlets forced even critical-minded journalists into submission:

“I just never even pitched stories that I knew would never get in. What you read in my book would just never, ever, in any form, even in news form, get into the FT. And I knew that and I wasn’t stupid enough to even pitch it. I knew it wouldn’t even be considered. After I got knocked back from pitching various articles I just stopped… It was complete self-censorship.”

‘A Mercenary in a Sense’

“Every journalist has an audience he caters for and in my case, it’s the financial community,” Anatoly Kurmanaev explained. “You are a mercenary in a sense. You’re there to provide information to a particular client that they find important and it’s not good or bad, it’s just the way it is.”

When he made these comments, Kurmanaev was working for the publication owned by Michael Bloomberg, the pro-war billionaire who is today the 13th-richest person in the world, and whose reporters are forbidden from “investigating” his presidential campaign.

With pressure from all sides to serve as stenographers for right-wing opposition movements, many Western correspondents exist in a cultural bubble, almost entirely isolated from the poor and working-class populations that support leftist governments across Latin America.

Western reporters almost universally live and work in the richest areas of capital cities from Venezuela to Mexico, often in gated communities surrounded by armed guards, and rarely venture into the poorer areas where the majority of people live.

Some of the corporate media’s top correspondents confided to me that they could not even speak Spanish for months after they got there, and were therefore unable to converse with the bottom 90-to-95 percent of the population. They are essentially parachuted in to opposition strongholds to work with opposition activists and naturally take that side in the debate.

With all of these factors in mind, the cheerleading across the U.S. press for regime change in Bolivia and Venezuela can hardly be seen as an accident. Too many journalists at corporate media outlets tend to see themselves as the ideological shock troops in an information war against supposedly tyrannical socialist governments.

Passing off regime-change propaganda as unbiased news is all in a day’s work for those embracing their role as servants of the empire.

Alan MacLeod is an academic and journalist. He is a staff writer at Mintpress Newsand a contributor to Fairness and Accuracy in Reporting (FAIR). He is the author of “Bad News From Venezuela: Twenty Years of Fake News and Misreporting.”

13 comments for “How Journalists Demonize Venezuela’s Government, in Their Own Words”