Caitlin Johnstone draws attention to the scramble by TV show hosts last week to get a Labour Party opponent of Jeremy Corbyn’s back on script.

There’s a wildly under-appreciated clip of news footage from Thursday’s general election in the U.K. that, now that everyone’s had some time to emotionally process the emotional fallout from that depressing night, needs more attention.

Labour MP and chronic left-puncher Jess Phillips appeared on Channel 4 to talk about how devastated she was about the news of exit polls showing her party’s crushing defeat, except the cameras switched on before she was prepared and caught her in the middle of a joyful chuckle. It took several seconds and the overt reminders from the show’s hosts to put on a “straight face” and act emotional before she could conceal her cheery mood as Corbyn’s Labour leadership was trampled underfoot by odious empire lackey Boris Johnson.

“Good evening Jess,” said the program’s host Krishnan Guru-Murthy. “How are you feeling as these results unfold?”

Watching the stumbling improvisation that came next feels like walking into a room full of awkward silence when your supposed friends had just been saying mean things about you, or seeing your spouse conspicuously jump away from an attractive coworker when you drop by the office.

Phillips, still unaware that the cameras were now rolling, did not interrupt the delighted guffaw she’d been enjoying.

“Can you hear me Jess Phillips?” the host asked over nervous tittering from the audience. “It’s Krishnan.”

“I can hear you, sorry,” Phillips said after a moment, literally putting her hand over her mouth for a few seconds to hide her giant grin.

“Straight face,” said Guru-Murthy, who then apparently realized that this was a bizarre thing to say and added “Actually you don’t have to have a straight face, umm, on this show. Umm… what are you thinking?”

“Oh are you talking to me now? Sorry that wasn’t clear,” said Phillips after a pause, her face now finally somewhat straightened out. “Sorry, I’m really tired. What I’m thinking is… it’s, it’s just totally devastating isn’t it? It’s totally devastating that all the people that I see every day, they’re gonna have nowhere to turn. I mean, I should probably do that thing where we all pretend that we’re gonna wait and see if the results are better than we thought, but it feels like a kick in the stomach.”

“I’m just waiting actually, I mean, for your thoughts,” Guru-Murthy said after an awkward pause. “I mean, you look emotional, and upset, and that’s understandable.”

Guru-Murthy was lying. At no time did Phillips look either emotional or upset.

“Jess it’s just that you look very emotional, and we know you, we know you’re a normal, sane person, so it’s very confusing,” host Katherine Ryan fictionalized, when Phillips struggled to hear what Guru-Murthy had said.

The audience, probably relieved to have a taste of something that isn’t intensely awkward and disturbing, erupted in applause.

For months the imperial media have been loudly anointing Phillips as the establishment choice to replace the unabashedly socialism-minded Corbyn, as Kit Knightly described for Off-Guardian back in March. This coronation-by-media continues today with outlets ranging from The Guardian to Daily Mail to Telegraph placing her on the short list to assume leadership of the Labour Party over the last couple of days.

After an anti-imperialist, pro-Palestinian socialist was magically thrown into role of Opposition leader by an extraordinary accident in 2015, Phillips leapt into her role as outspoken Corbyn critic by publicly telling him “I won’t knife you in the back, I’ll knife you in the front.” Despite this vow, Phillips proceeded to steadfastly knife Corbyn in the back by fanning the flames of incredibly disingenuous smears against his leadership, elevating the imaginary Labour anti-Semitism crisis to such a cartoonish extent that earlier this year she proclaimed that a tweet saying “Palestine Lives” from Young Labour “is antisemitic and it has to stop.” This malice continued into the final days before the general election, with Phillips criticizing Corbyn for not responding adequately to claims about anti-Semitism in the Labour Party by Chief Rabbi Ephraim Mirvis.

Phillips’s hot mic moment, and the mad scramble of the show’s perception-managing pundits to clean it up, provides us with a brief glimpse behind the phony persona that the empire’s political/media class put on for us. Should Senator Bernie Sanders by some Corbyn-like miracle overcome the rigged primaries and receive the Democratic Party’s presidential nomination, we may be absolutely certain we’ll see a campaign to sabotage his run and force a loss to President Donald Trump in the U.S. elections next year. And we may be absolutely certain they’ll cackle about it just as Jess Phillips did when she thought the cameras were off. 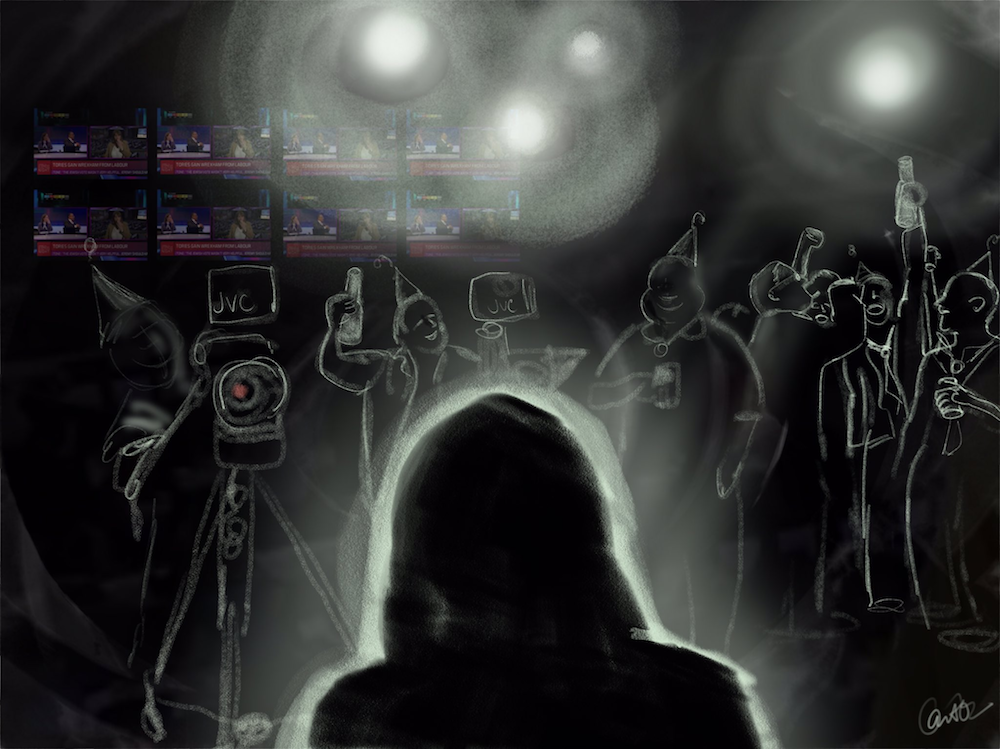 Caitlin Johnstone is a rogue journalist, poet, and utopia prepper who publishes regularly at Medium. Follow her work on Facebook, Twitter, or her website. She has a podcast and is the author of “Woke: A Field Guide for Utopia Preppers.”

← If You Want Peace You Get War; If You Want War You Get Rich
LETTER FROM BRITAIN: Why Labour Lost →