The late 19th Century trial of the wrongly accused French military officer gives hope to the WikiLeaks editor about the fate of Julian Assange.

Kristinn Hrafnsson, the editor-in-chief of WikiLeaks, has turned to history to find hope for his imprisoned publisher, Julian Assange.

“Over a hundred years ago, there was a symbolic case of a travesty of justice, that is still remembered especially in France,” Hrafnsson told CN Live! in an interview from Canberra, Australia. “[Alfred] Dreyfus was sentenced to life imprisonment for betraying his country. … But ten years later he was free.”

Dreyfus, an artillery officer, was falsely accused of communicating French military secrets to the German embassy in Paris and with a feverish press campaign against him, was convicted in a closed trial of treason in 1894. Dreyfus remained in prison two years later as the French military brass suppressed new evidence showing another officer had committed the crime.

When the novelist Emile Zola accused the military of having falsely convicted Dreyfus, Zola himself was convicted of criminal libel and had to flee the country.

“It didn’t look good for the first few years, [Dreyfus] had no support,” Hrafnsson said. “The entire press was against him. One commentator at the time said that the only regret the Parisians had was that the death penalty had just been recently abolished.” 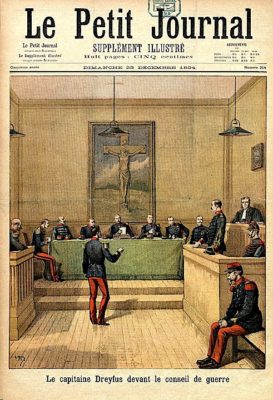 Hrafnsson said, “The politicians were against him, he had no support from the general public. Only Dreyfus’ brother fought to have him freed. One man was able to garner support of a handful of intellectuals who then started campaigning, people who understood the importance of this case.”

In the same way, the press and public are against Assange, and only a handful of intellectuals are campaigning for his release from prison in London. Assange is facing an extradition request from the United States, where he has been charged with espionage for publishing classified material revealing evidence of U.S. war crimes.

“Here we are talking about a travesty of justice that has a lot of similarities,” the WikiLeaks editor said. “Evidence being tampered with, people lie in court, etc. But there was a turnaround … .” Dreyfus was eventually acquitted and released after ten years on Devil’s Island.

“In the end, even though they thought that [Dreyfus] was lost, he was able to return, his honor was restored, the military got him a promotion,” Hrafnsson said. “So even though things are bleak, these battles are fought by … small groups of individuals who are able to push and push until things break.”

In Assange’s case, “You can almost smell the breakthrough,” he said. “You get more understanding and sympathy from the cab drivers driving you around the streets of London, or even here in Melbourne or Sydney than by some members of the media in London, leaving aside the politicians.”

But Hrafnsson said: “I’m hoping this will be won with the understanding of the grassroots of individuals.  The fight of people all over the world is really heartening and it is having an effect.”

You can watch the CN Live! interview with Kristinn Hrafnsson in its entirety here:

(The featured image is a photograph from the second trial of Dreyfus in 1899, a contemporary gelatin silver print by the Russian journalist Valerian Gribayedoff 1858-1908.)