Compared to the unmitigated vilification by normal media, the chance for both Corbyn and Sturgeon to be seen directly by viewers in election coverage will improve the standing of both, writes Craig Murray.

I have had moments in the last few days which led me to feel pretty hopeless. Perhaps the worst was in the ITV debate when Labour Leader Jeremy Corbyn was roundly jeered by a substantial section of the audience for stating that climate change impacted hardest on the poorest people in the poorest countries.

That encapsulated for me the current far right political climate in England, dominated by boorish, selfish stupidity. I do not come from a left-wing political background and I have never subscribed to the romanticization of “the people.” Years living in the UKIP heartland of Ramsgate made me realize that “the people” en masse can be very unpleasant and racist indeed. I have always for that reason eschewed direct democracy and subscribed to a very Burkean view. That however falls down when, as now, you have a political class who are becoming even more base and vicious than the most unpleasant mob. But the growl of that studio audience, infuriated that Corbyn cared about the foreign poor, is a warning klaxon of the state of English society. 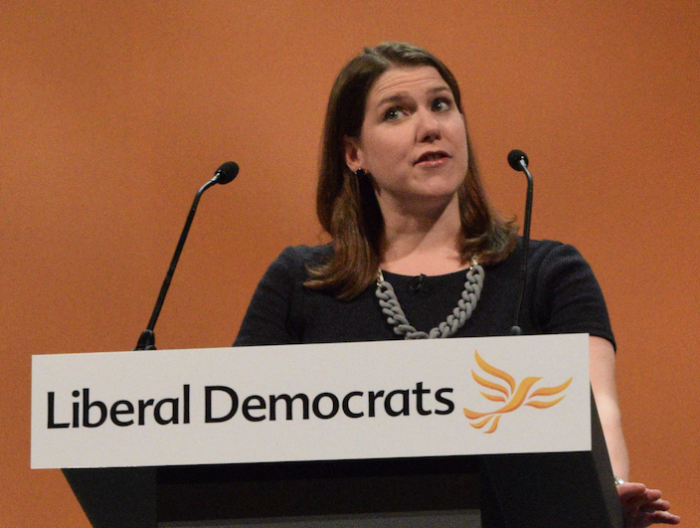 A close second despair-inducing moment was Jo Swinson’s interview following the debate when, asked if she would press the nuclear button, the leader of the Liberal Democrats replied without a millisecond of hesitation: “yes.” As I reported last week, when asked at the Lib Dem campaign launch why she would not put Corbyn into Downing Street in any circumstances, she had instantly replied that he would not be prepared to instruct submarine commanders to fire nuclear weapons.

The woman is deranged.

I come from a Liberal tradition. Probably the two books which most influence my thinking are “On Liberty,” by John Stuart Mill and “Imperialism, A Study,”  by J. A. Hobson. The line of British liberal thinking that comes down through writers including Hazlitt, Shelley, Byron, Carlyle, Mill, Hobson, Russell and Keynes is a tradition which looks set to disappear from British political thought.

That makes me horribly sad. One thing I am sure of is that Swinson has read none of them. That the Lib Dems had moved economically so far to the right was already worrying me. Their completely illiberal opposition to Scottish independence upset me still further. But that the party to which I belonged for 30 years and which was once led by my friend, the gentle and wise Charlie Kennedy, could now be led by an arm whirling, narcissistic, female version of Dr. Strangelove, is beyond my wildest nightmares.

Back to the ITV Debate

Let me go back to that ITV Debate. It was enormously dispiriting that of a 50-minute debate, 25 minutes were devoted to the subject of Brexit, compared to just one minute on the question of climate change. The Brexit discussion was completely unenlightening, with Prime Minister Borsi Johnson booming out “Get Brexit Done” at every opportunity, and even when there was no rational opportunity after the discussion had finally been moved on to other subjects.

I thought Jeremy was slightly under par. There was one point where I think he made a definite mistake. When Johnson claimed the last Labour government bankrupted the country’s finances, Corbyn failed to come back and say that it was the bankers who bankrupted the country’s finances. He could have gone on to add that banking deregulation had been the cause of a decade of global misery and Boris Johnson’s plans for Singapore on Thames would be banking deregulation on steroids.

It is not the first time this election that Labour have failed to point out it was the bankers who crashed the economy. I am not sure why. It may be a desire to seem City-friendly. Corbyn may be held back because, like me, he believes Brown was completely wrong to bail out the bankers with taxpayers’ money, and Corbyn therefore thinks it best to avoid the whole topic for the sake of party unity. Either way, to let Johnson say that Labour spending ruined the economy is to miss an open goal – the bankers are still massively unpopular.

The other point is one where Jeremy actually annoyed me. I cannot tell you how infuriating it was, as a Scot, to see Johnson repeatedly stating that Scotland would not be allowed an Independence referendum, and Corbyn making no effort at all to stand up for the Scottish right of self-determination. Given SNP exclusion from the debate, it was demeaning to see our masters discussing our future with no pretense of giving a hearing to the Scottish point of view.

Corbyn has to tackle this. The Johnson “Labour will give you two referendums” attack line is not being sufficiently countered. For Corbyn to ask Johnson whether he accepts that the Scottish people have the right of self-determination would be a killer question, and Jeremy could ask it quietly and effectively. A large majority of English people are actually perfectly happy for Scotland to have an Independence referendum.

Corbyn has tied himself in knots to accommodate the bitter cabal of Blairites and Orangemen that constitute the majority of the rump Scottish Labour Party, while its membership and voters have defected en masse to the SNP. Forty percent of the remaining Labour voters support Independence anyway. Rather than put himself in a false position for the sake of hopeless colleagues who have crashed Scottish Labour from domination to 12 percent of the vote, Corbyn should state his support for the right of the Scottish people to decide – something which I have no doubt he personally believes in, deeply.

The good news is that Johnson made an ass of himself in the debate, constantly repeating “Get Brexit Done,” and Corbyn’s insistence on discussing more important issues than Brexit cut through. YouGov’s verdict of a 51-to-49 victory for Johnson was very dubious indeed. But even that would be a major advance for Corbyn given the constant barrage of unfair media demonization to which he has been subjected in the last five years. Almost 7 million people watched the event live, a significant audience. Parity with that audience is a very good start for Labour. I suspect it really went better than that. YouGove have a long and dishonorable history as Tory push pollsters.

There are similarities here to the 2017 election. The chance for both Corbyn and Nicola Sturgeon, leader of the Scottish National Party, to be seen in election coverage directly by viewers, each arguing their own case, will improve the standing of both with the electors, compared to the unmitigated vilification of normal media. (Sturgeon is being unfairly excluded from key debates but her Dundee speech today was extensively covered).

The Tory campaign of closed workplace addresses, artificial set-up encounters and a constant simple soundbite slogan is repeating the formula that failed so spectacularly in 2017. “Get Brexit Done” is going to annoy voters as much as “Strong and Stable” did, especially if Johnson continues to deploy it whatever the question asked.

I strongly expect we will see the first signs of the opinion polls starting to tighten shortly. I am half-English myself and have no desire to see Johnson inflicted on the population of Newcastle or Liverpool. But I confess I am also comfortable in the certainty that should Johnson win the election, it will precipitate Scottish Independence very soon. Nobody should despair yet. But it is certainly more comfortable to watch this from Edinburgh than from Manchester.

8 comments for “Do Not Despair of UK Election”