Caitlin Johnstone blasts The Guardian for its belated defense of Julian Assange and its harmful coverage in the past.

The Guardian has published an editorial titled “The Guardian view on extraditing Julian Assange: don’t do it,” subtitled “The US case against the WikiLeaks founder is an assault on press freedom and the public’s right to know.” The publication’s editorial board argues that since the Swedish investigation has once again been dropped, the time is now to oppose U.S. extradition for the WikiLeaks founder.

“Sweden’s decision to drop an investigation into a rape allegation against Julian Assange has both illuminated the situation of the WikiLeaks founder and made it more pressing,” the editorial board writes.

Oh okay, now the issue is illuminated and pressing. Not two months ago, when Assange’s ridiculous bail sentence ended and he was still kept in prison explicitly and exclusively because of the U.S. extradition request. Not six months ago, when the U.S. government slammed Assange with 17 charges under the Espionage Act for publishing the Chelsea Manning leaks. Not seven months ago, when Assange was forcibly pried from the Ecuadorian embassy and slapped with the U.S. extradition request. Not any time between his April arrest and his taking political asylum seven years ago, which the Ecuadorian government explicitly granted him because it believed there was a credible threat of U.S. extradition. Not nine years ago when WikiLeaks was warning that the U.S. government was scheming to extradite Assange and prosecute him under the Espionage Act.

There is, needless to say, no hint or suggestion in the Mueller Report that Paul Manafort visited Julian Assange ever in his life, let alone 3 times in the Ecuadorian Embassy during the election. It would obviously be there if it happened. How can the @guardian not retract this?? pic.twitter.com/5ory1w0mfj

This is after all the same Guardian which published the transparently ridiculous and completely invalidated report that Trump lackey Paul Manafort had met secretly with Assange at the embassy, not once but multiple times. Not one shred of evidence has ever been produced to substantiate this claim despite the embassy being one of the most heavily surveilled buildings on the planet at the time, and the Robert Mueller investigation, whose expansive scope would obviously have included such meetings, reported absolutely nothing to corroborate it. It was a bogus story which all accused parties have forcefully denied. 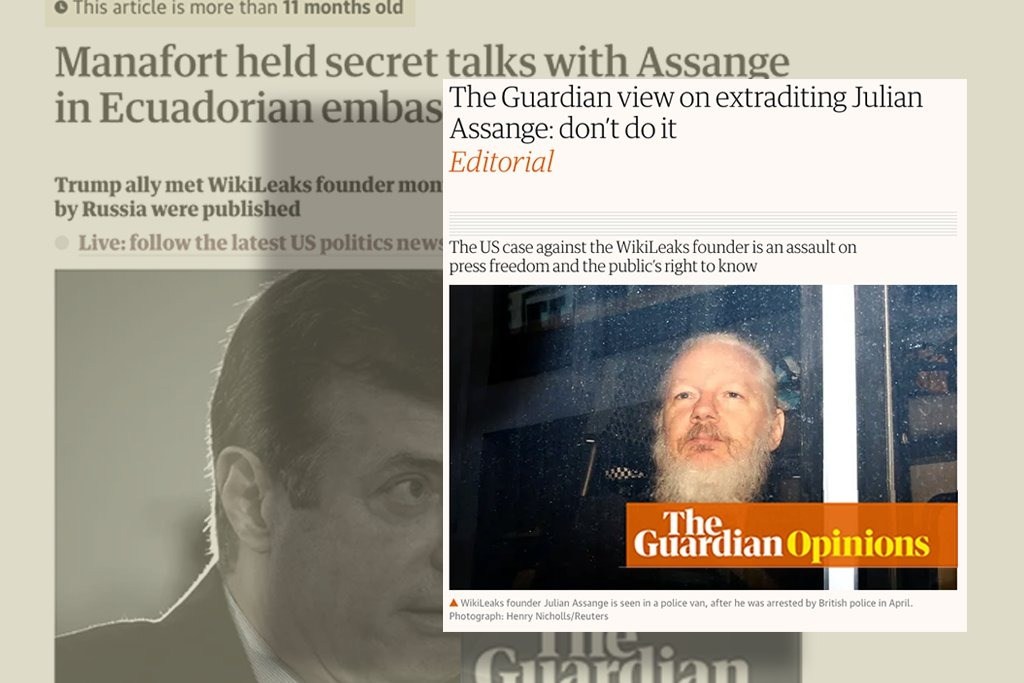 This is the same Guardian which ran an article last year titled “The only barrier to Julian Assange leaving Ecuador’s embassy is pride,” arguing that Assange looked ridiculous for remaining in the embassy because “The WikiLeaks founder is unlikely to face prosecution in the U.S.”

The article was authored by the odious James Ball, who deleted a tweet not long ago complaining about the existence of UN special rapporteurs after one of them concluded that Assange is a victim of psychological torture. Ball’s article begins, “According to Debrett’s, the arbiters of etiquette since 1769: ‘Visitors, like fish, stink in three days.’ Given this, it’s difficult to imagine what Ecuador’s London embassy smells like, more than five-and-a-half years after Julian Assange moved himself into the confines of the small flat in Knightsbridge, just across the road from Harrods.”

This is the same Guardian which published an article titled “Definition of paranoia: supporters of Julian Assange,” arguing that Assange defenders are crazy conspiracy theorists for believing the U.S. would try to extradite Assange because “Britain has a notoriously lax extradition treaty with the United States,” because “why would they bother to imprison him when he is making such a good job of discrediting himself?”, and “because there is no extradition request.”

This is the same Guardian which published a ludicrous report about Assange potentially receiving documents as part of a strange Nigel Farage/Donald Trump/Russia conspiracy, a claim based primarily on vague analysis by a single anonymous source described as a “highly placed contact with links to US intelligence.” The same Guardian which just flushed standard journalistic protocol down the toilet by reporting on Assange’s “ties to the Kremlin” (not a thing) without even bothering to use the word “alleged,” not once, but twice. The same Guardian which has been advancing many more virulent smears as documented in this article by The Canary titled “Guilty by innuendo: the Guardian campaign against Julian Assange that breaks all the rules.”

A look at how sleazeball journalists at the Guardian tried to 'Russiagate' Assange https://t.co/fzfDr4q02O

You can see, then, how ridiculous it is for an outlet like The Guardian to now attempt to wash its hands of Assange’s plight with a self-righteous denunciation of the Trump administration’s extradition request from its editorial board. This outlet has actively and forcefully paved the road to the situation in which Assange now finds himself by manufacturing consent for an agenda which the public would otherwise have found appalling and ferociously objectionable. Guardian editors don’t get to pretend that they are in some way separate from what’s being done to Assange. They created what’s being done to Assange.

The deployment of a bomb or missile doesn’t begin when a pilot pushes a button, it begins when propaganda narratives used to promote those operations start circulating in public attention. If you help circulate war propaganda, you’re as complicit as the one who pushes the button. The imprisonment of a journalist for exposing U.S. war crimes doesn’t begin when the Trump administration extradites him to America, it begins when propagandistic smear campaigns begin circulating to kill public opposition to his imprisonment. If you helped promote that smear campaign, you’re just as responsible for what happens to him as the goon squad in Trump’s Department of Justice.

Really great talk by @RonPaulInstitut's Daniel McAdams titled "How Not To Be a CIA Propagandist" on the importance of never facilitating propaganda narratives against governments targeted for regime change, even if you disagree with their ideology.https://t.co/22W785ahh0

Before they launch missiles, they launch narratives. Before they drop bombs, they drop ideas. Before they invade, they propagandize. Before the killing, there is manipulation. Narrative control is the front line of all imperialist agendas, and it is therefore the front line of all anti-imperialist efforts. When you forcefully oppose these agendas, that matters, because you’re keeping the public from being propagandized into consenting to them. When you forcefully facilitate those agendas, that matters, because you’re actively paving the way for them.

Claiming you oppose an imperialist agenda while helping to advance its propaganda and smear campaigns in any way is a nonsensical and contradictory position. You cannot facilitate imperialism and simultaneously claim to oppose it.

They work so hard to manufacture our consent because they need that consent. If they operate without the consent of the governed, the public will quickly lose trust in their institutions, and at that point it’s not long before revolution begins to simmer. So, don’t give them your consent. And for God’s sake don’t do anything that helps manufacture it in others.

Words matter. Work with them responsibly.