James Le Mesurier, the founder of the White Helmets, has died. He was found to have plummeted from a height to the street outside his home, and authorities are reportedly calling it a suicide.

Le Mesurier has a history with British military intelligence and was fundamentally involved with an extremely shady narrative management operation geared toward manufacturing support for yet another imperialist military intervention in yet another Middle Eastern nation, so obviously any claims of suicide should be taken with a grain of salt no smaller than a Buick. But it is worth noting that according to Middle East Eye, Le Mesurier’s wife told police that he’d been struggling with psychological issues for which he was taking medications and had previously been hospitalized. Le Mesurier’s home was reportedly only accessible by fingerprint and no video footage of anyone besides Le Mesurier and his wife entering or leaving has been found.

Establishment narrative managers, for their part, have been floating the possibility that the White Helmets founder was murdered by the Russian government. The Washington Examiner has published an article titled “Did Russia kill White Helmets founder James Le Mesurier?,” calling to mind Betteridge’s law of headlines, which states that “Any headline that ends in a question mark can be answered by the word no.” The BBC’s Mark Urban tweeted out and then deleted a thread (screenshots here) in which he cites an anonymous source who claims to have known Le Mesurier’s flat well enough to be sure that it’s not possible to “fall” from his balcony, then meaningfully pointing to a “black propaganda campaign by Russia and Assad media” against Le Mesurier. He apparently didn’t consider the possibility of suicide until later, saying he deleted his thread due to “new information.”

For more info on Le Mesurier and his White Helmet mates, I highly recommend watching this excellent half-hour video by James Corbett. It’s full of primary-source video footage indisputably confirming the organization’s ties to Western governments and to violent extremist factions in Syria, and explaining how an allegedly “neutral” organization on the ground has been used to control the narrative about what’s been happening in Syria.

Pundits who’ve built their name on Syria narrative management have been expressing grief over Le Mesurier’s death, including Eliot Higgins, Charles Lister, Julian Röpke and Oz Katerji. Katerji, an especially aggressive imperialism proponent, was particularly stricken, acknowledging that this pervasively corrupt operative was actually a dear friend of his.

“It is with a deeply heavy heart that I do this, but I can confirm my friend James Le Mesurier, founder of Mayday Rescue of White Helmets fame, died at his home in Istanbul last night,” Katerji tweeted. “I am profoundly saddened by this, Jakes was a brave and decent man who saved countless lives. I will miss him. I am at a loss for words.”

Janine di Giovanni, who in 2016 authored a fawning puff piece on Le Mesurier and the White Helmets for Newsweek, tweeted, “Terrible news. James was funny, smart, brave, committed. He stood up to bullies. On the right side of history. Believed in the White Helmets, their mission, their drive for good. A loss to humanity.”

Journalist Jonathan Cook criticized di Giovanni’s gushing hagiography, tweeting, “This is what access journalism looks like: prize-winning war correspondents like Janine di Giovanni hanging out with ‘funny’ spooks like James Le Mesurier who’ve been responsible for stoking the very wars they report on — wars that have destroyed whole societies.”

On the death of James Le Mesurier, western governments' organiser of logistics support and propaganda for the fanatical jihadists in Syria, it is no surprise that today "Philip Cross" makes 48 edits to his Wikipedia page.https://t.co/qei9MnbgRC

Former U.K. ambassador Craig Murray has flagged the fact that Wikipedia’s imperialist narrative manager “Philip Cross” has made dozens of edits to Le Mesurier’s Wiki page since his death. Cross, who I’ve reported on previously, has made a more-than-full-time job of constantly managing the Wikipedia pages of both pro-establishment and anti-establishment media figures in a very pro-establishment slant; an article by Five Filters which you can read by clicking here documents how the “Philip Cross” account has been working morning to night with precisely zero days off toward this endeavor. 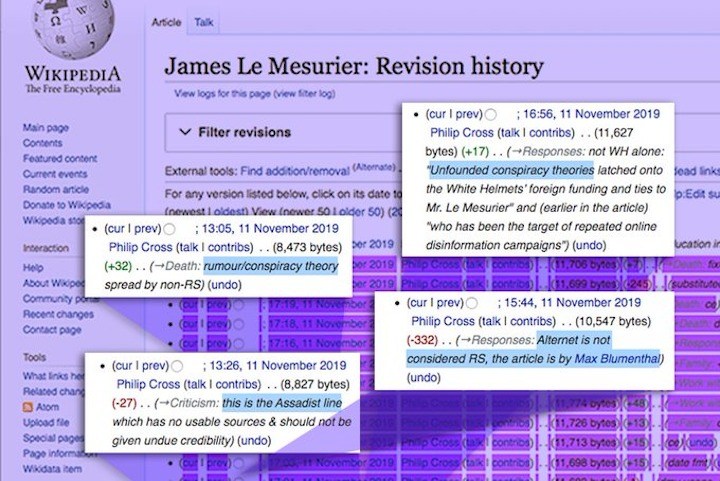 An article published by Murray last year documents the curious fact that although the serial Wikipedia editor had only about 200 followers on Twitter, he was followed by many high-profile narrative managers from huge British news media outlets like The Guardian, The Times and the BBC, as well as none other than James Le Mesurier himself.

Murray wrote at the time:

To these questions I would add, why was Le Mesurier seen defending “Philip Cross” from someone voicing suspicion of him on Twitter after George Galloway offered a reward for information about the account? These questions have never been satisfactorily answered. And now this same account is frantically editing the Wikipedia page of his late fan James Le Mesurier. Some excerpts from the editing notes Cross has made to the page (note: according to Wikipedia, “RS” is short for Reliable Source):

The article also has an editorial discussion section about whether or not it’s appropriate to have a “criticisms” section on the page, and how much any criticisms should be limited. Cross is of course intimately involved in this discussion as well.

There is an immense narrative management campaign dedicated to controlling what people think about what’s happening in Syria, aimed not solely at advancing the longstanding regime change agenda of the U.S.-centralized empire but at protecting the credibility of the warmongering government and media institutions who the public is growing increasingly skeptical of in a post-Iraq invasion information age. If people become doubtful in the propaganda machine which greases the gears of war, then warmongering itself will become impossible to carry out without waking the masses up from the narrative control matrix they’ve worked so hard to lull us into. Without endless war, the empire will crumble.

Whoever controls the narrative controls the world. Narrative control comes before any other priority the empire might have; before resources, before land, before even war itself. Our rulers and their goons will protect their ability to control the story of what’s happening tooth and claw. It’s up to us to see through their lies and bring an end to the lie factory.

Caitlin Johnstone is a rogue journalist, poet, and utopia prepper who publishes regularly at Medium. Follow her work on Facebook, Twitter, or her website. She has a podcast and a  book “Woke: A Field Guide for Utopia Preppers.”