Consortium News has provided leading WikiLeaks coverage from as early as 2010, under its founder Robert Parry. It’s another good reason to support Consortium News.

On Dec. 16, 2010 Robert Parry wrote an article on Consortium News about Julian Assange that is as relevant today as it was nine years ago. Parry wrote about the Obama administration’s attempt to indict Assange for simply doing what all investigative journalists do: namely encourage their sources to turn over secret information even if they have to break the law to do so. While the Obama DOJ eventually decided against indictment because it would cross the red line of criminalizing journalism, the Trump administration crossed that very line on the very same evidence the Obama administration rejected. It was an especially prescient and relevant article from the late founder of Consortium News, written just eight months after the release of the Collateral Murder video.

“Whatever the unusual aspects of the case, the Obama administration’s reported plan to indict WikiLeaks founder Julian Assange for conspiring with Army Pvt. Bradley Manning to obtain U.S. secrets strikes at the heart of investigative journalism on national security scandals.

That’s because the process for reporters obtaining classified information about crimes of state most often involves a journalist persuading some government official to break the law either by turning over classified documents or at least by talking about the secret information. There is almost always some level of ‘conspiracy’ between reporter and source.” 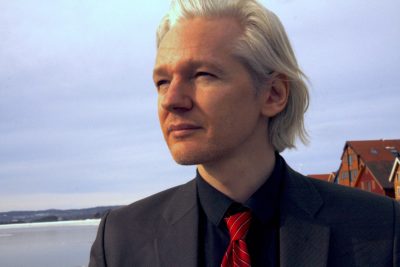 If you read the two indictments against Assange, for which the Trump administration wants the imprisoned publisher extradited from Britain to Virginia, they describe this very process of investigative journalism that Bob, one of America’s greatest investigative reporters, described in his piece. Assange is accused of helping Manning hide her identity, not to hack classified material that the indictment says Manning already had legal access to. And Assange is accused of goading Manning to give over more material, as if that is a crime. The indictments describe journalism, not hacking.

Essentially what Bob was saying is:  all investigative journalists are Julian Assange. And that’s why corporate media sell-outs, who defend the powerful and not the public, don’t consider Assange a journalist, though he has done exactly their job, only better. The satirical publication The Onion put these made-up words into the mouth of Washington Post Editorial Page Editor Fred Hiatt, a frequent target of Bob’s ire:

“It’s abundantly clear that Mr. Assange was focused on exposing documented evidence of U.S. war crimes in Iraq and Afghanistan without so much as a thought for the journalists who faithfully parroted the U.S. military’s talking points when we could have been investigating information that ran contrary to that narrative—does he realize how that makes us look?”

In the years since that article by Bob, Consortium News’ coverage of WikiLeaks and Assange has grown into the most extensive to be found in either established or alternative media. Last year the site began hosting a weekly online video vigil for Assange while he was still in the Ecuador embassy, which developed into CN Live! Around the time of his arrest on April 11, 2019 we provided wall-to-wall coverage for several days and continue to remain on top of the story. Last week’s CN Live! was completely devoted to Assange.

In the face of corporate media malpractice on this story, we remain committed to fighting to get the facts out about Assange–a journalistic test case for the ages on which the future of journalism literally hinges. But we can’t do it without you. So please give a tax-deductible contribution to our Fall Fund Drive so that you’ll still be able to turn to Consortium News for the latest news, analysis and commentary on the plight of Julian Assange and a free press.

← WATCH: Ep. 15 of CN Live! Special on Julian Assange
RAY McGOVERN: Thanks to a Soviet Navy Captain — We Survived 1962 →