The way we design systems that elevate psychopaths to positions of leadership have been causing problems throughout history, writes Caitlin Johnstone.

Due to a very painful and disturbing revelation in my personal life I have had the unfortunate occasion to spend the last several days thinking a lot about psychopaths and what makes them tick. I don’t want to get into the hairy details at this time, but I would like to share some of the more general thoughts that have been coming up here on the matter.

It is interesting that psychopathy should have reached a dark tentacle into my life in the way that it did, given that the three years I’ve been at this gig have been spent writing more and more about the way our world is run by calculating manipulators who are devoid of empathy. I often say that we have found ourselves ruled by psychopaths because we have a system wherein (A) those who are willing to do anything to anyone are rewarded with immense wealth, and (B) immense wealth translates directly to immense political power. Add in the fact that studies have shown that wealth itself kills off empathy and compassion, and you’ve got yourself a perfect recipe for a plutocratic dystopia dominated by antisocial personality disorder.

I’m not really interested in getting into the specific clinical diagnoses of psychopathy and sociopathy for the purposes of this discussion. What I’m talking about here is a specific slice of humanity that is neurologically wired in such a way that they experience the world more as a series of puzzles which can be manipulated around to get them whatever they want regardless of who it hurts, rather than experiencing a world full of fellow sentient beings with whom you can have deep, meaningful connections and interactions. Not all people who are diagnosed as psychopaths are high-functioning enough to manipulate people at high levels, and not everyone who manipulates people in this way would necessarily be diagnosed as a psychopath or even a sociopath. Feel free to mentally substitute whatever term you prefer. 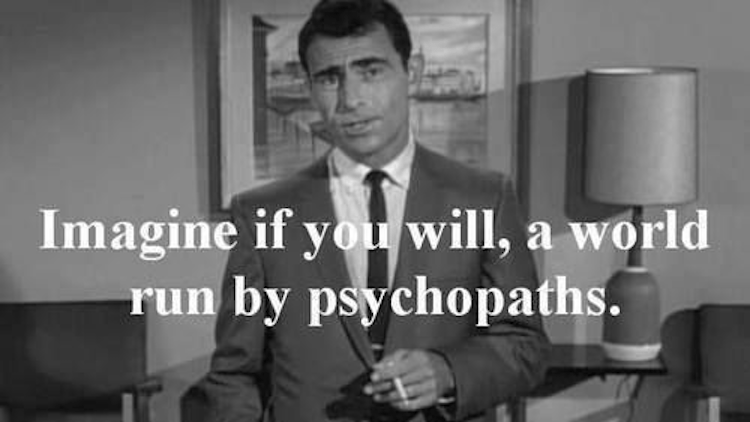 Whatever you want to call it, people who have this condition (and are able to avoid prison) tend to do quite well for themselves by our society’s standards. Because they don’t see other people as anything other than tools and resources, they don’t let empathy and compassion stand in their way when viciousness and exploitation will help them achieve their goals. Because they don’t value connections with other people, they don’t see narratives and descriptions as paths toward deeper understanding, but as tools which can be twisted and distorted in order to secure themselves more wealth, status, sex, or whatever else they want. They quickly rise to the top in corporate and financial settings, in media institutions, in government agencies, and in politics. In modern society this ability is a natural advantage that the rest of us simply cannot compete with.

Given that (A) those who lack empathy are able to do whatever it takes to make the most money, (B) studies have shown that immense wealth kills empathy, and (C) money translates directly to political power, it is only natural that we now find ourselves ruled by sociopaths.

But it’s not just our current iteration of society which elevates psychopaths to the top. A casual glance through recorded history all around the world reveals an essentially unbroken track record of genocide, slavery, torture, exploitation and degradation as far as the eye can see, with the driving characters time and again being depraved dominators, conquerors and mass murderers. Research some of the horrors that were inflicted upon the Aboriginal people of Australia and the indigenous populations of the Americas and you’ll see that the whole thing was driven by a total lack of empathy for those human beings. Throughout history our main problems have been caused by the way we keep designing systems which elevate psychopaths to positions of leadership, who then go on to make psychopathic decisions.

Given the fact that people who are indifferent to truth or human suffering have always been so adept at ascending to power positions, it’s hard to even imagine a society where we don’t find ourselves ruled by psychopaths. George R.R. Martin set out to tell a story about a cast of characters all vying for power in an epic game of thrones, and that story wound up being populated almost entirely by psychopaths and sociopaths. It makes for a compelling tale because it’s very believable based on what we all know deep down about human behavior patterns, but it’s also a relentless assault on the audience’s empathy center.

So, what can be done, then? How can we ordinary, feeling, caring human beings protect ourselves from this segment of the population which has been driving us into disaster after disaster since the dawn of civilization before they get us all killed?

Psychopathic leaders have never had any trouble figuring out how to get rid of segments of the population who they deem problematic: they round them up and exterminate them. This would obviously be out of the question for many reasons, not the least because in order to implement it we’d need to become psychopaths ourselves. We’d be “curing” the sickness by becoming the sickness. Passing a bunch of laws against manipulation and deception wouldn’t work either. Manipulators actually love rules and laws, because they can figure out how to manipulate them and use them to their advantage. Julian Assange is currently awaiting extradition hearings in Belmarsh Prison because a bunch of psychopathic manipulators decided to pretend that it was very, very important to respect a series of laws and rules ranging from bail protocol to whistleblower source protection to government bureaucracy to embassy cat hygiene, and they were able to engineer a result that just so happens to look exactly the same.

I’ve seen some people advocating mandatory brain scans for anyone seeking a leadership position. It is true that a psychopath’s brain shows up differently from that of the rest of us on a PET scan, and it is possible to envision a future where the collective is so aware of the pernicious dance between psychopathy and power that such a policy might be set and enforced. The problem of course is that manipulators manipulate, and there are many ways to manipulate one’s way around such a system; they’ve been inserting themselves into unofficial leadership positions for ages, for example, for which they’d never need to be tested. Plutocrats, advisers and propagandists are all in unofficial leadership positions.

Maybe you’ve got your own ideas about this, but I personally can’t think of a single solution to the fundamental problem of psychopaths inserting themselves into positions of power which doesn’t involve drastic, unprecedented changes in our civilization and our culture. Even if you completely tore down capitalism, ended plutocracy and replaced the entire system with a government-planned economy, you would still have positions of power and the absolute certainty of psychopaths manipulating their way into those positions sooner or later. 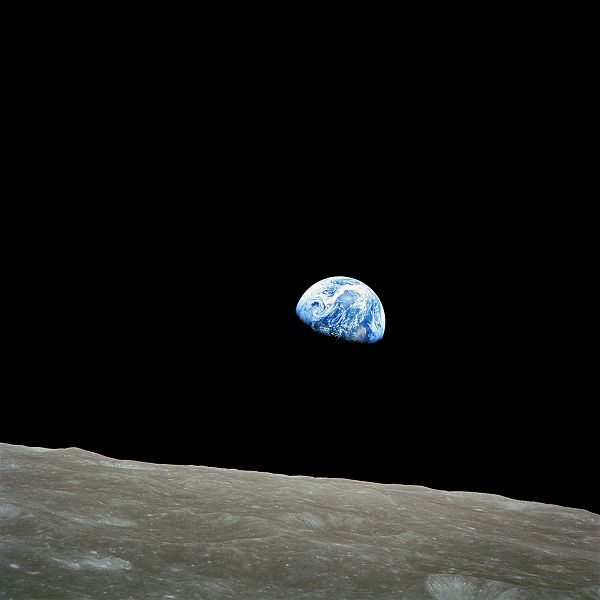 I’m talking about changes as drastic as the end of anyone having any power over anybody at all. A society where the idea of having power over anybody became so culturally taboo that even an unequal power dynamic between spouses would be seen as outrageous and ugly, to say nothing of governments or police forces. Such a society is very far from what we’ve got now, but it would surely be a very inhospitable environment for psychopathy. There would be no positions of leverage for one to manipulate their way into in order to force others to give them what they want, and if you started trying to create one everybody would immediately point at you and yell “Hey! What are you doing? Stop that, that’s weird! If you want something from us you need to form consensual collaborative relationships with us, just like we’re all doing.”

It’s also possible to imagine a culture in which manipulation is seen as an unacceptable taboo which immediately draws public backlash in the same way. In such a culture, children would learn from the youngest age what honest and sincere interaction looks like, with examples of deceit and manipulation clearly illustrated for them in all forms as something gravely disordered. Advertising would cease to exist in such a society, as would propaganda in all its forms. And psychopaths would be like fish out of water, because manipulation only works when it isn’t recognized as such.

One can also imagine a culture which values empathy, compassion and helping others instead of valuing wealth, accomplishment and conquest. In such a culture we’d see the ability to connect with people and work for the good of the whole elevated, rather than seeing the ability to do whatever it takes to claw your way to the top of the heap elevated. In such a society psychopathy would actually be an immense disadvantage, rather than an immense advantage.

And that, in my opinion, would be the marker of a healthy society: one in which psychopathy and sociopathy become grave mental handicaps that the afflicted need to actively seek help for. A society that is so empathic and collaborative that having a diagnosis of schizophrenia or bipolar disorder isn’t such a big deal because your neighbors work with you and help you with what you need rather than pushing you to conform and achieve, while having psychopathy or sociopathy is a debilitating disorder which will turn you into a pariah sleeping on park benches if you don’t get help. Right now we have the opposite: people with schizophrenia, bipolar disorder and other serious mental illnesses are treated like worthless hindrances to a society which values achievement over empathy, while psychopaths and sociopaths almost never seek help unless it’s court-ordered.

Is such a society possible? I don’t know. I recently put together some evidence which seems to suggest that our species may be on the verge of a drastic shift in consciousness, which would be the only facilitating agent I can think of that would make such massive cultural changes feasible. We seem to be headed for either huge changes or extinction relatively soon, so if there’s a future humanity on the other side of what’s coming, it likely exists because it made extraordinary changes in both its behavior and in its relationship with the phenomenon of psychopathy. We’ll either make the jump or we won’t.

← Legacy of British Empire Lurks Behind Today’s Headlines
PEPE ESCOBAR: The Road to Damascus: How the Syria War was Won →

65 comments for “On Psychopathy & Power”