While championing a CIA agent who should be considered an operative until proven otherwise, much of the press is ignoring the plight of Chelsea Manning, who exposed actual U.S. war crimes, writes Caitlin Johnstone. 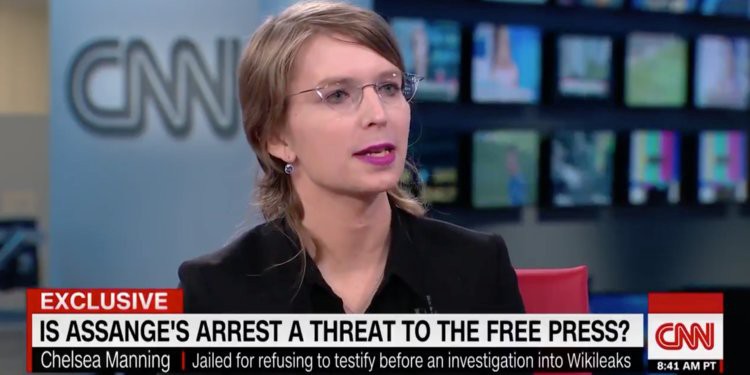 The word “whistleblower” has been trending in news headlines lately, but not for the reasons that any sane person might hope for.

So who is this “savvy official”? Who is this courageous whistleblower who boldly shone the light of truth upon the mechanisms of power in the interests of the common man? Who is this brave, selfless individual who set off an impeachment inquiry by taking a stand and revealing that the U.S. president made a phone call in July urging Ukrainian president Volodymyr Zelensky to help investigate corruption allegations against Joe Biden and his son?

Well believe it or not, according to The New York Times this brave, noble whistleblower who the mainstream media are currently championing is an officer for the Central Intelligence Agency.

The idea that the media needs to “protect” a high-level CIA officer making explosive claims about the president, which have now been used as the basis for impeachment proceedings, is such an insane perversion of journalistic ethics

“The whistle-blower who revealed that President Trump sought foreign help for his re-election and that the White House sought to cover it up is a CIA officer who was detailed to work at the White House at one point, according to three people familiar with his identity,” The New York Times reports. “The man has since returned to the CIA, the people said. Little else is known about him.”

So there you have it. A mysterious stranger from the lying, torturing, propagandizing, drug trafficking, assassinating, coup-staging, warmongering, psychopathic CIA was working in the White House, heroically provided the political/media class with politically powerful information out of the goodness of his heart, and then vanished off into the Langley sunset. Clearly there is nothing suspicious about this story at all.

In all seriousness, even to call this spook a “whistleblower” is ridiculous on its face. You don’t get to call someone from U.S. intelligence a whistleblower unless they are actually whistleblowing on U.S. intelligence agents. That’s not a thing. A CIA officer who exposes information about government officials is an operative performing an operation unless proven otherwise, because that’s what the CIA does; it liberally leaks information wherever it’s convenient for CIA agendas while withholding all other information behind a veil of government secrecy.

A CIA officer who exposes information about CIA wrongdoings without the CIA’s permission is a whistleblower. A CIA officer who exposes information about someone else is just a spook doing spook things. You can recognize the latter by the way the mass media supports, applauds and employs them. You can recognize the former by the way they have been persecuted, imprisoned, and/or died under mysterious circumstances.

“The idea that the media needs to ‘protect’ a high-level CIA officer making explosive claims about the president, which have now been used as the basis for impeachment proceedings, is such an insane perversion of journalistic ethics,” journalist Michael Tracey tweeted today on this new development.

Socialism for the rich, capitalism for the poor.
Privacy for the powerful, surveillance for the powerless.
Charity for CIA spooks who will receive full establishment protection, rugged individualism for everyone else. https://t.co/hknmtlFVdv

While all this political/media class cheerleading for whistleblower protections is going on, the most prominent whistleblower in America remains imprisoned for taking a principled stand against secret grand juries while being driven into crippling debt. Chelsea Manning is still racking up fines of $1,000 per day while locked in a Virginia federal detention center for refusing to testify against WikiLeaksfounder Julian Assange. The mainstream press that is so keen to champion a “whistleblower” who works for the CIA and provided information which feeds into America’s fake partisan pro wrestling feud has been almost completely silent on the actual whistleblower who exposed actual U.S. war crimes.

“The courageous whistleblower Chelsea Manning has now been held in a federal detention center in Alexandria, Virginia for more than six months,” reads a recent article by World Socialist Website, one of the only news outlets to consistently report on Manning’s plight. “Manning has not been charged with or committed any crime. She was sent to jail on March 8, 2019 for refusing to testify before a secret grand jury that has indicted persecuted WikiLeaks founder and publisher Julian Assange, who published the information she leaked exposing rampant US imperialist criminality.”

“The vindictive treatment of Chelsea Manning has included ‘administrative segregation’ — a prison euphemism for solitary confinement — and being fined an unprecedented $1,000 per day for refusing to answer grand jury questions,” WSWS reports. “By the time she might be released in October 2020, she will be left owing the US government as much as $440,000. Convicted antiwar activist Jeremy Hammond, who provided intelligence documents to WikiLeaks, has been also brought to the same jail as Manning in order to coerce him into giving false testimony.”

“On a scale of ‘haha’ to ‘lol,’ how likely would you say it is that politicians’ sudden interest in whistleblowing will lead to the reform of the Espionage Act, which the government has routinely used to jail the sources behind some of the most important stories in US history?” tweeted NSA whistleblower Edward Snowden in response to an Onion article satirizing the latest hypocrisy.

On a scale of "haha" to "lol," how likely would you say it is that politicians' sudden interest in whistleblowing will lead to the reform of the Espionage Act, which the government has routinely used to jail the sources behind some of the most important stories in US history? https://t.co/CIbcLCN5Qn

Pointing out hypocrisy is such a common practice in politics that it often wears a bit thin these days, especially since it’s frequently done in a disingenuous way, but when implemented with intellectual honesty it serves a very useful purpose: it shows when people aren’t really being truthful about the position that they are taking.

I don’t pretend to know what the CIA’s game is here; it probably isn’t to remove Trump from office because everyone knows that will not happen and failed impeachments historically boost a president’s popularity. But I do know that everyone cheerleading for this fake “whistleblower” while ignoring the real ones has exposed themselves.