On Jan. 6, 2017, Comey confronted the president-elect about “salacious” activities with prostitutes at the Moscow Ritz-Carlton. He also provided Trump with misleading information about the Democratic opposition research dossier compiled by ex-British intelligence agent Christopher Steele, a bogus document whose political consequences were sure to be devastating once it was released, as it surely would be. 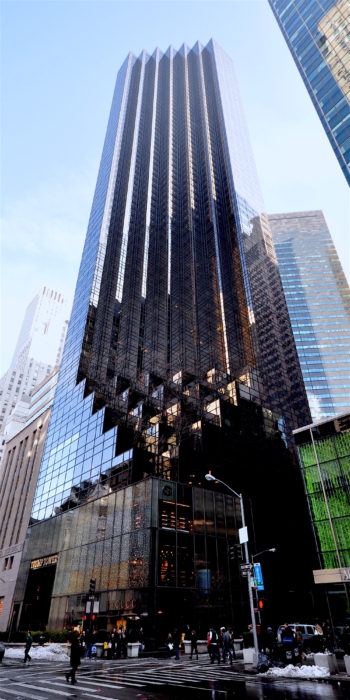 But why? Thanks to Michael Horowitz, the Justice Department’s inspector general, we now know.

The report that Horowitz released shows that Comey may have  been trying to set President Donald Trump up for a fall. Had the ploy worked, Trump might have found himself out of office for the “crime” of saying something wrong about an incident that was entirely made up.

Before the Trump Tower visit, Comey sat down with top FBI brass – Chief of Staff James Rybicki, Deputy Director Andrew McCabe, General Counsel James Baker, and others involved with the Russiagate investigation – to strategize about the upcoming meeting.

Page 17 of the OIG report tells of what they were up to:

“Baker and McCabe said that they agreed that the briefing needed to be one-on-one, so that Comey could present the ‘salacious’ information in the most discreet and least embarrassing way.  At the same time, we were told, they did not want the President-elect to perceive the one-on-one briefing as an effort to hold information over him like a ‘Hoover-esque type of plot.’  Witnesses interviewed by the OIG also said that they discussed Trump’s potential responses to being told about the ‘salacious’ information, including that Trump might make statements about, or provide information of value to, the pending Russian interference investigation.”

As the final sentence shows, Comey’s job was to confront Trump about the alleged 2013 Moscow incident and see whether he would give the FBI reason to advance its Russiagate investigation to a whole new level, that of the presidency itself.

This was the same approach the FBI would employ a couple of weeks later after listening in on a telephone conversation between Mike Flynn and Russian ambassador Sergey Kislyak and not liking what it heard about plans to bolster U.S.-Russian relations.  The solution was to send a couple of agents to quiz the newly-appointed national security adviser and see how he would respond. After telling Flynn not to bother bringing along a lawyer because it was just a friendly chat and “they wanted Flynn to be relaxed, and they were concerned that giving the warnings might adversely affect the rapport” – as a follow-up memo noted – the agents caught the ever-voluble Flynn fudging various details. Three weeks later, he found himself out of office and in disgrace.  Ten months after that, he was in federal court pleading guilty to making false and misleading statements.

Now we know from the OIG report that this was apparently the goal with regard to Trump.

Russiagate began nine months earlier with a smallarmy of intelligence agents buzzing around a naïve young Trump adviser named George Papadopoulos.  [See “Spooks Spooking Themselves,” May 31, 2018.]  An Anglo-Maltese academic named Joseph Mifsud, an individual with strong Anglo-American intelligence connections, wined and dined him and told him that Russia had “dirt” on Hillary Clinton in the form of “thousands of emails.”

An Australian diplomat, former Foreign Minister Alexander Downer, who was similarly connected, invited him out for drinks and then passed along the fruits of the conversation to Canberra, which related them to Washington.  A Belorussian-American businessman who worked for Steele offered Papadopoulos $30,000 a month under the table.  A U.S. intelligence asset named Charles Tawil presented him with $10,000 in cash.  A long-time CIA informant named Stefan Halper flew Papadopoulos to London and barraged him with questions:

“It’s great that Russia is helping you and the campaign, right, George? George, you and your campaign are involved in hacking and working with Russia, right? It seems like you are a middleman for Trump and Russia, right? I know you know about the emails.”

“I don’t know what the fuck you’re talking about,” Papadopoulos replied according to his recent book, “Deep State Target.”  But what if he had instead chuckled or said something stupid in order to puff himself up?  Based on previous FBI entrapment cases, the answer seems clear: after threatening him with prosecution, the bureau would have outfitted him with a wire so that he could bring down other campaign officials.  It wouldn’t have stopped until it snared the ultimate prize –Trump himself. 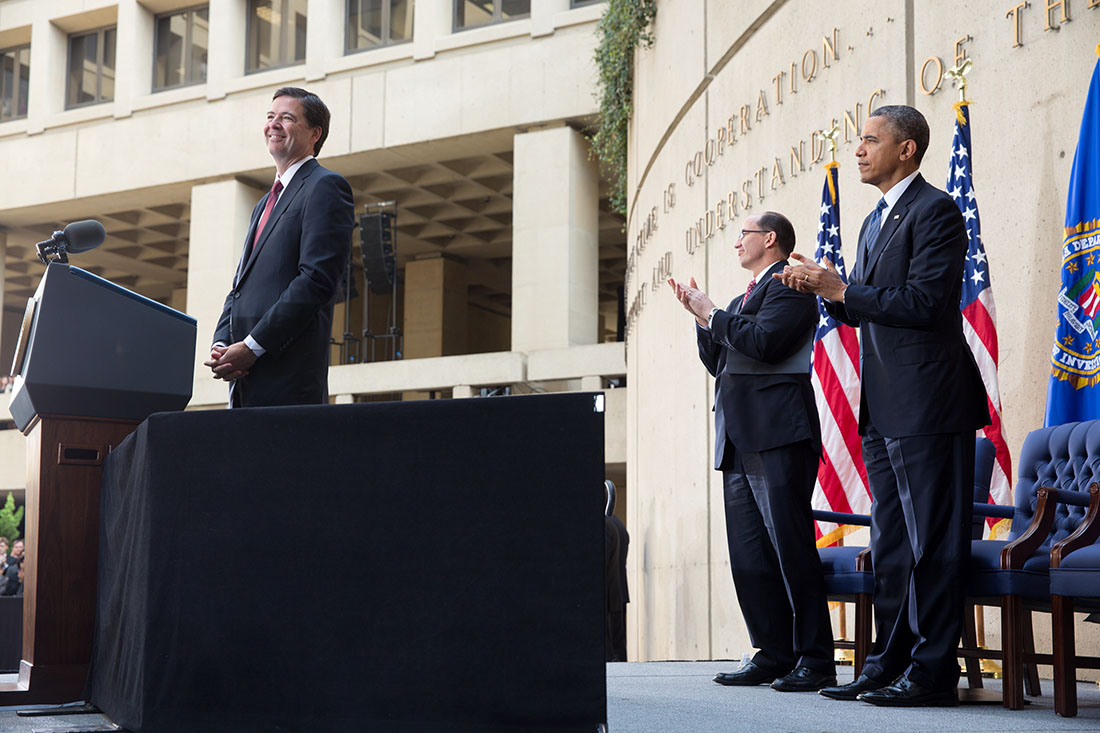 Trump told reporters in May he wanted Australia’s role to be investigated by the Justice Department.

Comey’s Trump Tower meeting was important because it led directly to the publication of the notorious dossier that would generate endless headlines and cripple the incoming Trump administration even though it was full of baloney.

Most of what we know about that meeting in the early days of the Trump administration comes from a memo that Comeydashed off minutes later and then lightly revised the next morning.

According to his memo, Comey met one-on-one with Trump to tell him about the Steele dossier because

“the content [was] known at IC [intelligence community] senior level and … I didn’t want him caught cold by some of the detail….  I said I wasn’t saying this was true, only that I wanted him to know both that it had been reported and that the reports were in many hands.  I said media like CNN had them and were looking for a news hook. I said it was important that we not give them the excuse to write that the FBI has the material … and that we were keeping it very close-hold.”

But Comey’s memo was disingenuous, starting with his line about not wanting to give the media “the excuse to write that the FBI has the material.” Leaks are an integral part of Washington, as an insider and a leaker like Comey knows.

As Comey must have also known, his very decision to brief Trump on the dossier wound up triggering press attention to it.

Four days later, Buzzfeed posted the dossier on its website. The source remains anonymous but it’s easy to imagine that either Director of National Intelligence James Clapper or CIA Director John Brennan spilled the beans. They both accompanied Comey to the meeting and were appalled by Trump’s call for a rapprochement with Russia.

Comey’s memo also rings false where it says he “wasn’t saying this was true, only that I wanted him to know both that it had been reported and that the reports were in many hands.”

Glenn Simpson, the ex-Wall Street Journal reporter whose private Washington intelligence firm, Fusion GPS, commissioned the dossier on behalf of the Clinton campaign and the DNC, told the House intelligence committee that Steele began sharing his findings with the FBI “in July or late June” of 2016.  (See p. 60 of testimony transcript).

That means that the bureau had the Moscow Ritz-Carlton report in hand six months prior to the Trump Tower meeting.  Surely, this is enough time to reach some conclusion as to its veracity.

Had Trump fallen into Comey’s trap, millions of Americans would no doubt have cheered – and given Trump’s dismal record in office, who can blame them?  But the implications are chilling, and not just for rightwing dissidents.  Instead of electing presidents, Americans would merely submit them to the FBI for review.

With the Electoral College and the Supreme Court already overturning the popular vote in two of the last five presidential elections, voters would have a fourth branch to contend with – the intelligence community.

As Democratic Senator Chuck Schumer told MSNBC’S Rachel Maddow at the height of the Russiagate madness: “Let me tell you, you take on the intelligence community – they have six ways from Sunday of getting back at you.”  Had Comey succeeded in bringing down Trump, they may have had a seventh.

← ‘Planet So Small We Must Live in Peace’
JOHN KIRIAKOU: Houthi Rebels are the Saudis’ Problem →

15 comments for “The Plan to Trip Up Trump”