Trump has taken an insane U.S. policy towards Iran and make it even crazier, writes Daniel Lazare.

Traffic accidents normally take just a second or two.  But the coming collision in the Persian Gulf, the equivalent of a hundred-vehicle pile-up on a fog-bound interstate, has been in the works for years.  Much of it is President Donald Trump’s fault, but not all.  His contribution has been to take an insane policy and make it even crazier.

The situation is explosive for two reasons. First, the Iranian economy is in a free fall with oil exports down as much as 90 percent from mid-2018 levels.  As far as Iran is concerned, this means that it’s already at war with the United States and has less and less to lose the longer the U.S. embargo goes on.

Second, after Trump denounced the 2015 Iranian nuclear accord from the moment he began his presidential run, it’s all but impossible at this point for him to back down.  The result is a classic collision between the immovable and the unstoppable with no apparent way out.

How did the world bring itself to the brink of war?  The answer, ironically, is by bidding for peace.

The process began in early 2015 just as the nuclear talks were entering their final stages.  Despite last-minute hand-wringing, it was clear that success was in sight simply because the participants – China, France, Russia, Germany, Britain, the European Union, Iran and the U.S. – all wanted it.

But other regional players felt differently, Saudi Arabia first and foremost.  The kingdom’s survival strategy depends on its special relationship with America, its patron since the 1940s.  Hence, it was panic-stricken by anything smacking of a U.S. rapprochement with its long-standing arch-enemy Iran.  The upshot was a proxy war in which the Saudis set out to roll back Iranian power by striking out at pro-Iranian forces.

The offensive began after a new Saudi monarch ascended the throne in January 2015.  King Salman, a doddering 79-year-old reportedly suffering from Alzheimer’s, immediately handed over the reins to his favorite son, 29-year-old Muhammad bin Salman, whom he named deputy crown prince and minister of defense.  MBS, as he’s known, celebrated by launching an air war in neighboring Yemen two months later – and then disappearing on a week-long vacation in the Maldives – and by funneling hundreds of U.S.-made TOWs (anti-tank guided missiles) to Syrian rebels under the command of Al-Nusra, the local Al-Qaeda affiliate, for use in an offensive in that country’s northwest province of Idlib.

For the Saudis, it was a neo-medieval crusade whose goal was to topple two religio-political allies of Iran, the Alawite-dominated government in Damascus and Yemen’s Houthis, who adhere to a non-Iranian form of Shi’ism that is no less anathema to the Sunni Wahhabist theocracy in Riyadh.

President Barack Obama went along.  With regard to Syria, an unidentified “senior administration official” told The Washington Post that while the White House was “concerned that Nusra has taken the lead,” all he would say in response to U.S.-made missiles winding up in Al-Qaeda hands was that it was “not something we would refrain from raising with our partners.”  (See “Climbing into Bed with Al-Qaeda,” May 2, 2015.)

Just two days after the start of the Saudi air assault in Yemen, Obama meanwhile telephoned Salman to assure him of U.S. support.  When asked why America would back a war by one of the Middle East’s richest countries against the very poorest, another anonymous U.S. official told The New York Times (April 2, 2015):

“If you ask why we’re backing this, beyond the fact that the Saudis are allies and have been allies for a long time, the answer you’re going to get from most people – if they were being honest – is that we weren’t going to be able to stop it.” But plainly the nuclear negotations were key.  The Obama administration was so anxious to smooth ruffled Saudi feathers and tone down criticism of the impending Iranian accord that it felt it had no choice but say yes to Saudi aggression.

The upshot has been Saudi wars claiming hundreds of thousands of lives in Syria and another 100,000 or so in Yemen while triggering a surge of international terrorism and the greatest refugee crisis since World War II. While reducing tensions in some respects, Obama’s efforts to reach a nuclear deal with Iran, paradoxically, caused them to explode in others. 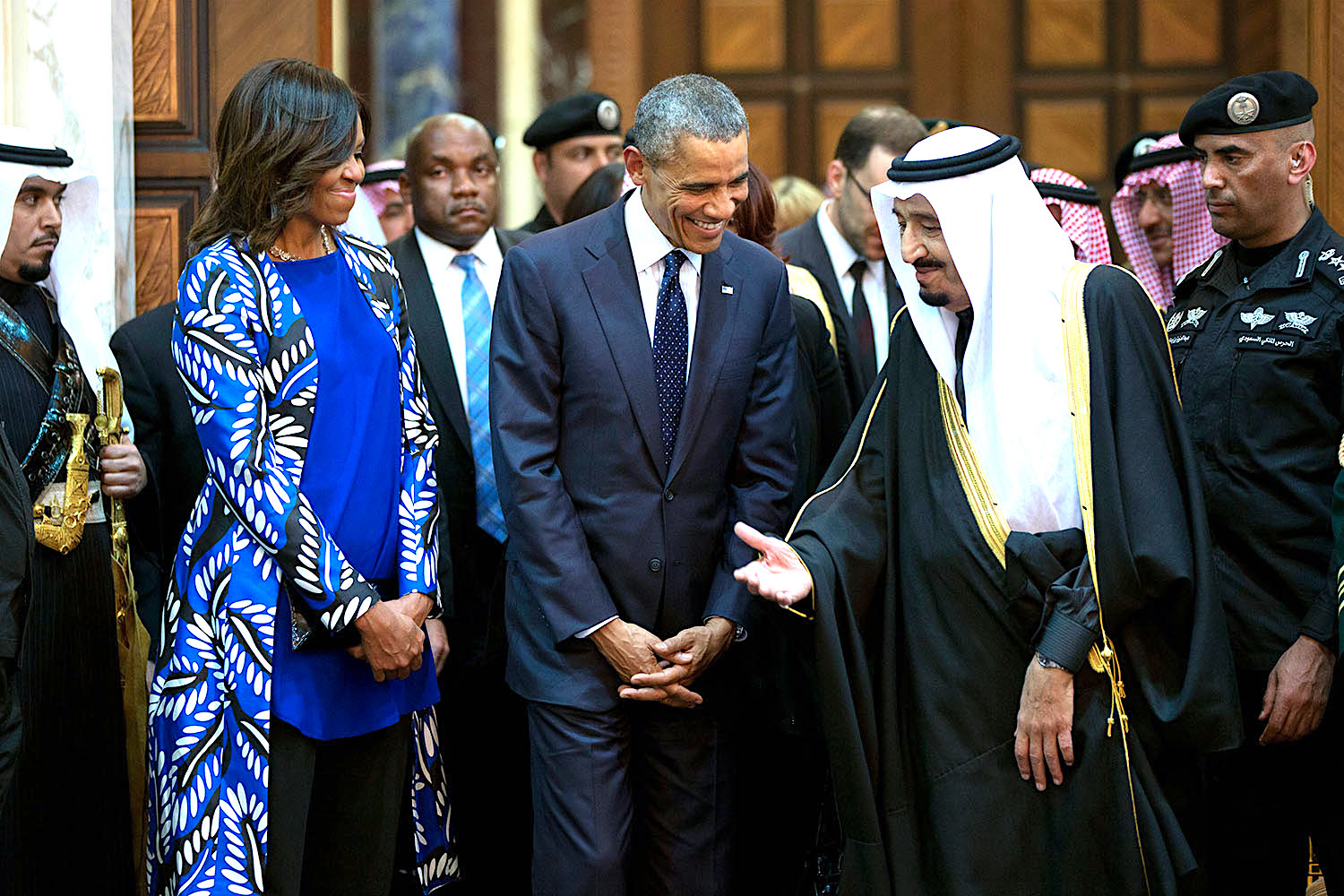 The American empire was possibly so over-extended that it was at the mercy of its ostensible clients.  Even while making peace with Iran, Obama thus green-lit Saudi wars that claimed hundreds of thousands of lives in Syria and another 100,000 or so in Yemen while triggering a surge of international terrorism and the greatest refugee crisis since World War II.  While reducing tensions in some respects, the 2015 nuclear negotiations, paradoxically, caused them to explode in others.

The results were so devastating in a region torn by war, sectarianism, and economic collapse that Trump could not possibly make them any worse – except that he did.

Announcing his presidential bid in June 2015, he launched into a typical Trumpian rant against China, Japan, Mexico – and Obama’s nuclear talks.  “Take a look at the deal he’s making with Iran,” he said.  “He makes that deal, Israel maybe won’t exist very long.”  A month later, he tweeted that the agreement, just inked in Vienna, “poses a direct national security threat.”  Two months after that, he told a Tea Party rally in Washington:

“Never, ever, ever in my life have I seen any transaction so incompetently negotiated as our deal with Iran….  They rip us off, they take our money, they make us look like fools, and now they’re back to being who they really are.  They don’t want Israel to survive, they will not let Israel survive, [and] with incompetent leadership like we have right now, Israel will not survive.”

It was all nonsense.  Rather than threatening the Jewish state, the treaty represented a landmark concession on Iran’s part, since Israel, with an estimated 80 to 90 nuclear warheads in its arsenal and enough fissile material for a hundred more, would maintain its nuclear monopoly in the Middle East indefinitely.  As for “our money,” the $150 billion in various foreign accounts were actually Iranian assets that had been frozen for years – a sum, moreover, that was closer to $56 billion once Iran settled its foreign debts.  Once sanctions were lifted, it was hardly unreasonable that such assets be restored.

Still there was hope.  While railing against Iran, Trump also taunted the Saudis for their role in 9/11: “Who blew up the World Trade Center?” he told Fox & Friends.  “It wasn’t the Iraqis, it was Saudi [Arabia].”  He repeatedly assailed the 2003 invasion of Iraq – even if he exaggerated his own role in opposing it – and criticized Obama for supporting Saudi-backed jihadis seeking to topple Syrian President Bashar al-Assad.

“Assad is bad,” he said in an October 2015 interview.  “Maybe these people could be worse.”

Trumpian isolationism was fleeting, if it ever existed at all.  Under intense pressure from neoconservatives, the Zionist lobby, and pro-Israel Democrats such as Russiagate attack dog Rep. Adam Schiff demanding stepped-up opposition with Iran, Trump did an about-face.  In May 2017, he flew to Riyadh, announced an unprecedented $110-billion arms deal, and proclaimed himself the kingdom’s newest BFF – best friend forever.

He echoed the Saudis by accusing Iran of funding “terrorists, militias, and other extremist groups that spread destruction and chaos across the region” and backed a Saudi blockade of neighboring Qatar.  When ISIS launched a bloody assault on central Tehran in early June that killed 12 people and injured 42, the only White House response was to declare that “states that sponsor terrorism risk falling victim to the evil they promote.”

But back in September 2001, some 60,000 Iranian soccer fans had observed a moment of silence in honor of the victims of the World Trade Center while then-President Mohammad Khatami declared on nationwide TV:

“My deep sympathy goes out to the American nation, particularly those who have suffered from the attacks and also the families of the victims.  Terrorism is doomed, and the international community should stem it and take effective measures in a bid to eradicate it.”

Yet all the Trump administration could say was that Iran had it coming.

It was Democrats who, in a typical attempt to outflank Trump on the right, introduced legislation in June 2017 by forcing him to impose penalties on Russia, North Korea, and Iran as well.  But after repudiating the JCPOA (the Joint Comprehensive Plan of Action, known as the Iran nuclear deal) in May 2018, Trump upped sanctions even more in November – not only against the Iranian government but against some 700 individuals, entities, aircraft, and vessels.  After Iran shot down a $130-million U.S. surveillance drone last month, Trump imposed sanctions on “supreme leader” Ayatollah Ali Khamenei, his office, and his closest associates.  Two weeks ago, he imposed penalties on Mohammad Javad Zarif, Iran’s U.S.-educated foreign minister.

It was a gesture of contempt for the very idea of diplomacy.  So what happens next?  The problem is that re-starting negotiations would not be enough.  Instead, Iran has demanded that the U.S. remove all sanctions and apologize before agreeing to a new round of talks.  Since this would be tantamount to re-authorizing the JCPOA, it’s unlikely in the extreme.  While Trump is known for changing his mind in a flash, a course correction of this magnitude is hard to imagine.

Thus, the confrontation is set to continue.  Iran may respond by seizing more oil tankers or downing more drones, but the problem is that the U.S. will undoubtedly engage in tit-for-tat escalation in response until, eventually, some kind of line is crossed.

If so, the consequences are unpredictable.  U.S. firepower is overwhelming, but Iran is not without resources of its own, among them anti-ship ballistic missiles, mobile short-range rockets that can hit naval targets, plus heavily-armed high-speed boats, mini-subs, and even “ekranoplans,” floating planes designed to skim the waves at 115 miles per hour.  Such weaponry could prove highly effective in the 35-mile-wide Strait of Hormuz.  Iran also has allies such as Lebanon’s Hezbollah, which has an estimated 130,000 missiles and rockets in its own arsenal, Assad’s battle-hardened military in Syria, Yemen’s Houthis, and pro-Iranian forces in Shi’ite-majority Iraq.

The upshot could be a war drawing in half a dozen countries or more.  A confrontation on that scale may seem inconceivable.  But, then, war seemed inconceivable in the wake of Archduke Franz Ferdinand’s assassination in June 1914.