Establishment narrative managers distracted attention from a notable antiwar contender, seizing instead the chance to marshal an old smear against her, writes Caitlin Johnstone.

In the race to determine who will serve as commander in chief of the most powerful military force in the history of civilization, night two of the CNN Democratic presidential debates saw less than six minutes dedicated to discussing U.S. military policy during the 180-minute event.

That’s six, as in the number before seven. Not 60. Not 16. Six. From the moment Jake Tapper said “I want to turn to foreign policy” to the moment Don Lemon interrupted Rep. Tulsi Gabbard just as she was preparing to correctly explain how President Donald Trump is supporting Al-Qaeda in Idlib, approximately five minutes and 50 seconds had elapsed. The questions then turned toward the Mueller report on Russian interference in the 2016 elections and impeachment proceedings.

Night one of the CNN debates saw almost twice as much time, with a whole 11 minutes by my count dedicated to questions of war and peace for the leadership of the most warlike nation on the planet. This discrepancy could very well be due to the fact that night two was the slot allotted to Gabbard, whose campaign largely revolves around the platform of ending U.S. warmongering.

CNN is a virulent establishment propaganda firm with an extensive history of promoting lies and brazen psyops in facilitation of   U.S. imperialism, so it would make sense that they would try to avoid a subject which would inevitably lead to unauthorized truth-telling on the matter.

But the near-absence of foreign policy discussion didn’t stop the Hawaii lawmaker from getting in some unauthorized truth-telling anyway. Attacking the authoritarian prosecutorial record of Sen. Kamala Harris to  thunderous applause from the audience, Gabbard criticized the way her opponent “put over 1,500 people in jail for marijuana violations and then laughed about it when she was asked if she ever smoked marijuana;” “blocked evidence that would have freed an innocent man from death row until the court’s forced her to do so;” “kept people in prisons beyond their sentences to use them as cheap labor for the state of California;” and “fought to keep the cash bail system in place that impacts poor people in the worst kind of way.”

Harris, who it turns out fights very well when advancing but folds under pressure, had no answer for Gabbard’s attack, preferring to focus on attacking former Vice President Joe Biden instead.

Later, when she was a nice safe distance out of Gabbard’s earshot, she uncorked a long-debunked but still effective smear that establishment narrative managers have been dying for an excuse to run wild with.

“This, coming from someone who has been an apologist for an individual, Assad, who has murdered the people of his country like cockroaches,” Harris told Anderson Cooper after the debate, referring to the president of Syria. “She who has embraced and been an apologist for him in a way that she refuses to call him a war criminal. I can only take what she says and her opinion so seriously and so I’m prepared to move on.”

That was all it took. Harris’s press secretary Ian Sams unleashed a string of tweets about Gabbard being an “Assad apologist,” which were followed by a deluge of establishment narrative managers who sent the word “Assad” trending on Twitter, at times when Gabbard’s name somehow failed to trend despite being the top-searched candidate on Google after the debate.

As of this writing, “Assad” is showing on the No. 5 trending list on the side bar of Twitter’s new layout, while Gabbard’s name is nowhere to be seen. This discrepancy has drawn criticism from numerous Gabbard defenders on the platform.

“Somehow I have a hard time believing that ‘Assad’ is the top trending item in the United States but ‘Tulsi’ is nowhere to be found,” tweeted  journalist Michael Tracey. 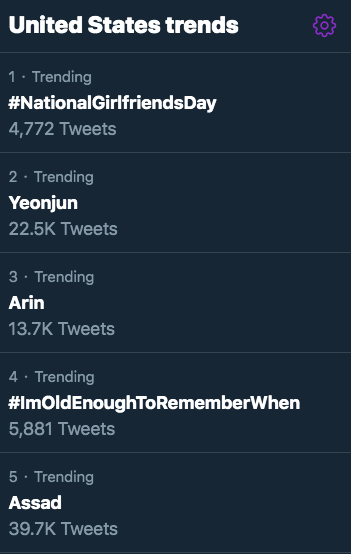 It really is interesting how aggressively the narrative managers thrust this line into mainstream consciousness all at the same time.

The Washington Post‘s Josh Rogin went on a frantic, lie-filled Twitter storm as soon as he saw an opportunity, claiming with no evidence whatsoever that Gabbard lied when she said she met with Assad for purposes of diplomacy and that she “helped Assad whitewash a mass atrocity,” and falsely claiming that “she praised Russian bombing of Syrian civilians.“

Met with Assad to Talk Peace

In reality all Gabbard did was meet with Assad to discuss the possibility of peace, and, more importantly, she said the U.S. shouldn’t be involved in regime change interventionism in Syria. This latter bit of business is the real reason professional war propagandists like Rogin are targeting her; not because they honestly believe that a longtime U.S. service member and sitting House representative is an “Assad apologist,” but because she commits the unforgivable heresy of resisting the mechanics of America’s forever war.

MSNBC’s Joy Reid gleefully leapt into the smearing frenzy, falsely claiming that “Gabbard will not criticize Assad, no matter what.” Gabbard has publicly and unequivocally both decried Assad as a “brutal dictator” and claimed he’s guilty of war crimes, much to the irritation of anti-imperialists like myself who hold a far more skeptical view of the war propaganda narratives about what’s going on in Syria.

It really is just weird how Gabbard will not criticize Assad, no matter what. That and the Trump/Russia crowd cheering her on are things that should have come up at these now two debates she has participated in. https://t.co/uUFd1KdI6v

At no time has Gabbard ever claimed that Assad is a nice person or that he isn’t a brutal leader; all she’s done is say the U.S. shouldn’t get involved in another regime change war there because U.S. regime change interventionism is consistently and predictably disastrous. That’s not being an “Assad apologist,” that’s having basic common sense.

All the usual war cheerleaders from Lindsey Graham to Caroline Orr to Jennifer Rubin piled on, because this feeding frenzy had nothing to do with concern that Gabbard adores Bashar al-Assad and everything to do with wanting more war.

Gabbard just publicly eviscerated a charming, ambitious and completely amoral centrist who would excel at putting a friendly humanitarian face on future wars if elected, and that’s why the narrative managers are flipping out so hard right now.

To repeat: There is no quote in which Tulsi praises, supports, or otherwise "apologies for" Assad. I checked the record a long time ago, and it doesn't exist. This is just a smear intended to delegitimize diplomatic engagement https://t.co/Iyww1C5Ew0

To repeat: There is no quote in which Tulsi praises, supports, or otherwise “apologies for” Assad. I checked the record a long time ago, and it doesn’t exist. This is just a smear intended to delegitimize diplomatic engagement

War is the glue that holds the empire together. A politician can get away with opposing some aspects of the status quo when it comes to healthcare or education, but war as a strategy for maintaining global dominance is strictly off limits. This is how you tell the difference between someone who actually wants to change things and someone who’s just going through the motions for show; the real rebels forcefully oppose the actual pillars of empire by calling for an end to military bloodshed, while the performers just stick to the safe subjects.

The shrill, hysterical pushback that Gabbard received last night was very encouraging, because it means she’s forcing them to fight back. In a media environment where the war propaganda machine normally coasts along almost entirely unhindered in mainstream attention, the fact that someone has positioned themselves to move the needle like this says good things for our future. If our society is to have any chance of ever throwing off the omnicidal, ecocidal power establishment which keeps us in a state of endless war and soul-crushing oppression, the first step is punching a hole in the narrative matrix which keeps us hypnotized into believing that this is all normal and acceptable.