Despite the seemingly escalating risks of war, last week also produced an unexpected drift toward the mahogany table.

There was no shortage of alarming incidents in and around the Persian Gulf last week. But the risks of open conflict between Iran and the U.S. are easily misread. The prospects for substantive diplomacy between the two sides are steadily brightening, recent events notwithstanding. This represents an advance for President Donald Trump in his intramural battles with the assertive hawks among his foreign policy advisers. Still more significantly, Washington now appears to be discovering the limits of hard power in the 21stcentury.

Trump announced last Thursday that a U.S. naval vessel patrolling the Persian Gulf had downed an Iranian drone over international waters — a claim Tehran has rebutted with persuasive evidence. On Friday the Iranian Revolutionary Guard’s navy briefly detained one British-owned tanker and continues to hold another while investigating alleged infractions of lawful conduct at sea — this in apparent retaliation for Britain’s earlier seizure of an Iranian tanker off Gibraltar.

It was a week of escalating tensions, as numerous press reports noted. Top British military officers warned Boris Johnson, who is likely to succeed Theresa May as prime minister on Tuesday, that he faces “a major international crisis” that could easily tip over into war.

There is always the possibility that a miscalculation on the ground or a commanding officer’s bout of bravado could spark a military confrontation. But setting this aside, the week delivered strong new indications that Trump and the leadership in Tehran are both now given to negotiating differences. In the best of outcomes, any such talks will be extended and all-encompassing.

Hassan Rouhani and Mohammad Javad Zarif, respectively Iran’s president and foreign minister, both signaled last week that Tehran is open to new talks under certain conditions. On the U.S. side, Trump and Secretary of State Mike Pompeo did roughly the same. “We are not looking for regime change. We are not looking for that at all,” Trump said Tuesday. “We’ll see what happens. But a lot of progress has been made.”

Two days after those remarks, Politico reported that Trump had accepted Sen. Rand Paul’s proposal, advanced during a round of golf the previous weekend, to represent the White House in talks with Iranian officials. The Kentucky senator is noted for his vigorous opposition to military adventures — a position in keeping with the president’s ostensible views. It is not clear who Paul might meet, or where and when any such encounter could take place. But Trump’s decision to accept Paul as his emissary is a savvy move to circumvent the hawks among his foreign policy advisers, chief among them National Security Advisor John Bolton, who has in the past called for regime change in Iran.

Bolton, often (but not always) with Pompeo’s support, has pressed for a highly confrontational Iran policy since he joined the administration last year. It now emerges that he played a leading role in conjuring the Gibraltar incident out of thin air, effectively using Britain as an unwitting tool to advance his hyper-hawkish Iran agenda.

The marked drift toward diplomacy last week represents an important, potentially decisive setback for Bolton and the White House’s hawkish factions. Washington’s hawks sustained another blow Saturday, when The New York Times published the astonishing remarks of Mahmoud Ahmadinejad, Iran’s former fire-breathing, often objectionable president who preceded Hassan Rouhani. “He is a businessman and therefore he is capable of calculating cost-benefits and making a decision,” the hardline Ahmadinejad said of Trump in an hour-long telephone interview with the Times. “We say to him, let’s calculate the long-term cost-benefit of our two nations and not be shortsighted.” 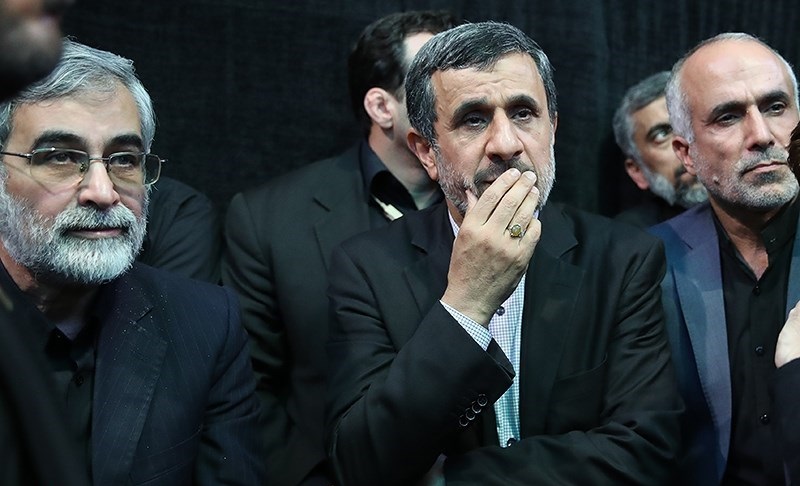 There are two remarkable things to note in this unexpected turn in the direction of the mahogany table. It reveals a split among Iran’s conservative factions that was hitherto not apparent. If hard-liners are coming to favor negotiations with the U.S., it is plain which direction the wind blows in Tehran.

Second, it is notable that Ahmadinejad proposes a comprehensive settlement that advances bilateral relations beyond the 40 years of animosity that have followed the 1979 revolution deposing Iran’s last shah, who enjoyed extravagant American support over nearly three decades. The signal here is not to be missed: Military solutions to long-term crises are less and less effective in an era of emerging powers such as China, Russia and Iran.

There are two other prominent cases demonstrating this point. One is Afghanistan. After 18 years of pointless war, American diplomats have been in direct talks with the Taliban since last October. The latest round,  during which the two sides negotiated the withdrawal of U.S. troops, took place in Qatar last month.

The closer parallel is with North Korea. Kim Jong-un, the North’s leader, articulated Ahmadinejad’s point long before Iran’s former president spoke to the Times: It is time to close the door on a protracted period of animosity. The thought suggests a long view of history rarely evident among American political figures.

Prior to his first summit with Kim, Trump was the fire-breather. As he repeatedly threatened the North with obliteration, “fire and fury,” and much else, naval task forces and nuclear-capable bomber squadrons operated perilously close to the North’s territorial waters and airspace. But the mid–2018 summit in Singapore radically shifted the administration’s position. While Bolton and Pompeo sabotaged the second Trump–Kim summit, held in Hanoi last February, Trump continues to press for the top-down diplomacy he plainly favors, as his informal encounter with Kim last month at the 38th parallel attests.

Trump’s desire to negotiate with Pyongyang has prompted extensive opposition in Washington from the first.

But this, too, now changes. In a startling piece published earlier this month, the Times reported that Trump now has “widening bipartisan support to build diplomacy with North Korea.” It went on to note that Stephen Biegun, Trump’s special representative for North Korea, was recently in Brussels and Berlin to cultivate diplomatic channels to Pyongyang. 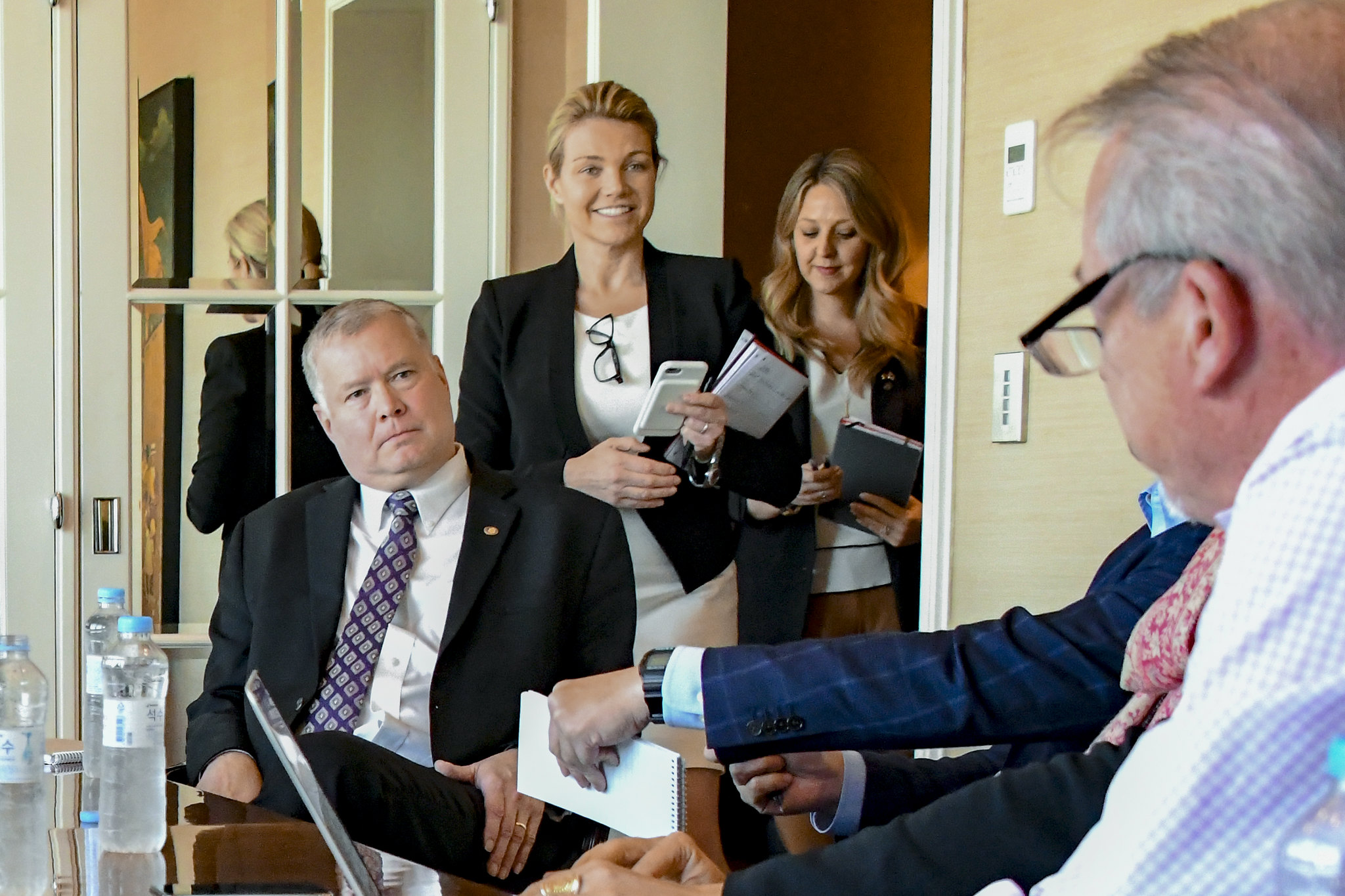 This remarkable shift appears to be nearly across the board — with the exception, of course, of über-hawkish camps such as Bolton’s. To underscore this point, the Times then quoted none other than Michael Morell, once the CIA’s acting director and since a consistent advocate of an aggressive U.S. military posture. “A negotiated solution is the only solution to this problem,” Morell said. “There isn’t a military option. There’s not a covert action option. So getting back to talks with the North Koreans is important, and I think that’s a good thing.”

It is an inevitable thing, too. In truth, military interventions in either Iran or North Korea have never been a realistic prospect. Pyongyang could launch missiles into Seoul in less than an hour; estimates of the troop strength required to invade Iran run from 100,000 to nearly 2 million. These are nickel-plated deterrents. The bluster in both cases has been hollow, the expensive deployments to the Persian Gulf and the waters off North Korea pointless.

It is very unlikely Trump understands our moment for its historical import. But in his preference for deal-making over war-making, he stands on the right side of it by happenstance. Hard power has never been more plainly in eclipse. A long age draws slowly to a close, what violence there is to come notwithstanding.