The warnings of climate chaos are coming so fast they are difficult to keep up with. Storms, heatwaves and climate-related weather disasters are increasing at a rapid pace. The leadership of the two corporate-dominated political parties are trying to keep the climate issue out of the 2020 campaign, but the movement is becoming too big to ignore. 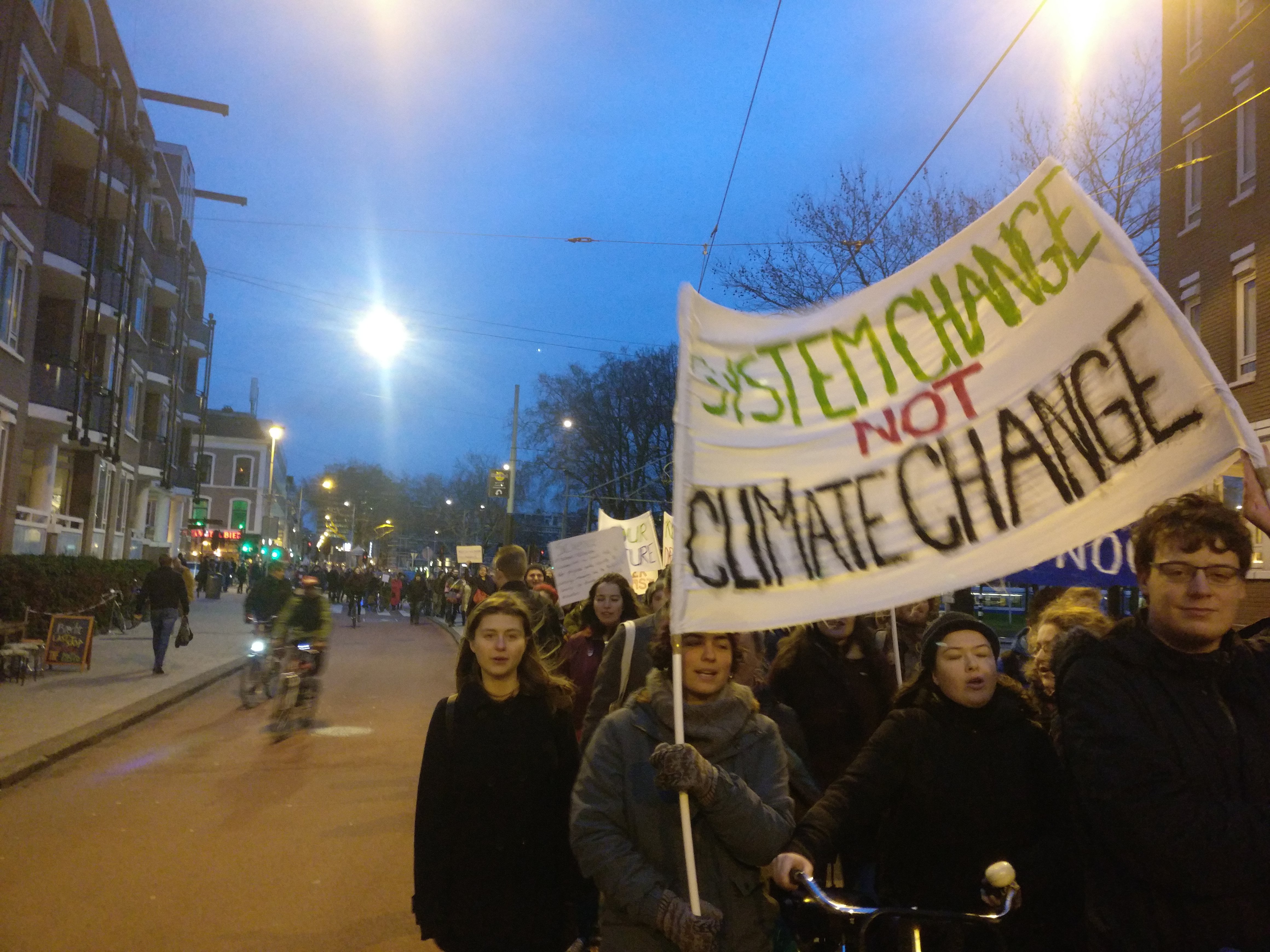 Several reports in recent weeks are expressing new concerns about the climate crisis.

An MIT study published last week found that we may be “at the precipice of an excitation” of the carbon cycle. Authors reported that when the rate at which carbon dioxide enters the oceans pushes past a certain critical threshold, it can trigger a reflex of severe ocean acidification that lasts for 10,000 years. The history of the earth shows that over the last 540 million years, this has coincided with four of the five great mass extinctions. Today’s oceans are absorbing carbon at an order of magnitude faster than the worst case in the geologic record, even though humans have only been extracting carbon for the last 100 years. This is likely to be similar to past global catastrophes potentially culminating in the Earth’s sixth mass extinction.

A June 20  report by the Center for Climate Integrity found that U.S. coastal communities face more than $400 billion in costs over the next 20 years, much of it sooner, to defend themselves from inevitable sea-level rise.

Related to this, a study published May 20 in Proceedings of the National Academy of Sciences concluded that coasts should plan for 6.5 feet of sea level rise by 2100. Ice loss from Antarctica and Greenland could cause far more sea-level rise than previously thought.

These reports are forcing the power structure to face the reality of the climate crisis.  Last month, Moody’s Analytics examined the economic impact of the failure to curb planet-warming emissions in “The Economic Implications of Climate Change.” Moody’s warns there will be a $69 trillion price tag by 2100 due to the far-reaching economic damage of the climate crisis. They warned: “There is no denying it: The longer we wait to take bold action to curb emissions, the higher the costs will be for all of us.”

These reports come at a time of increased climate-caused disasters. 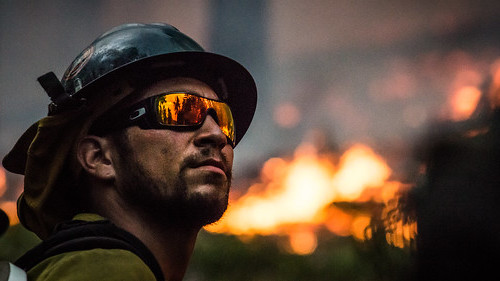 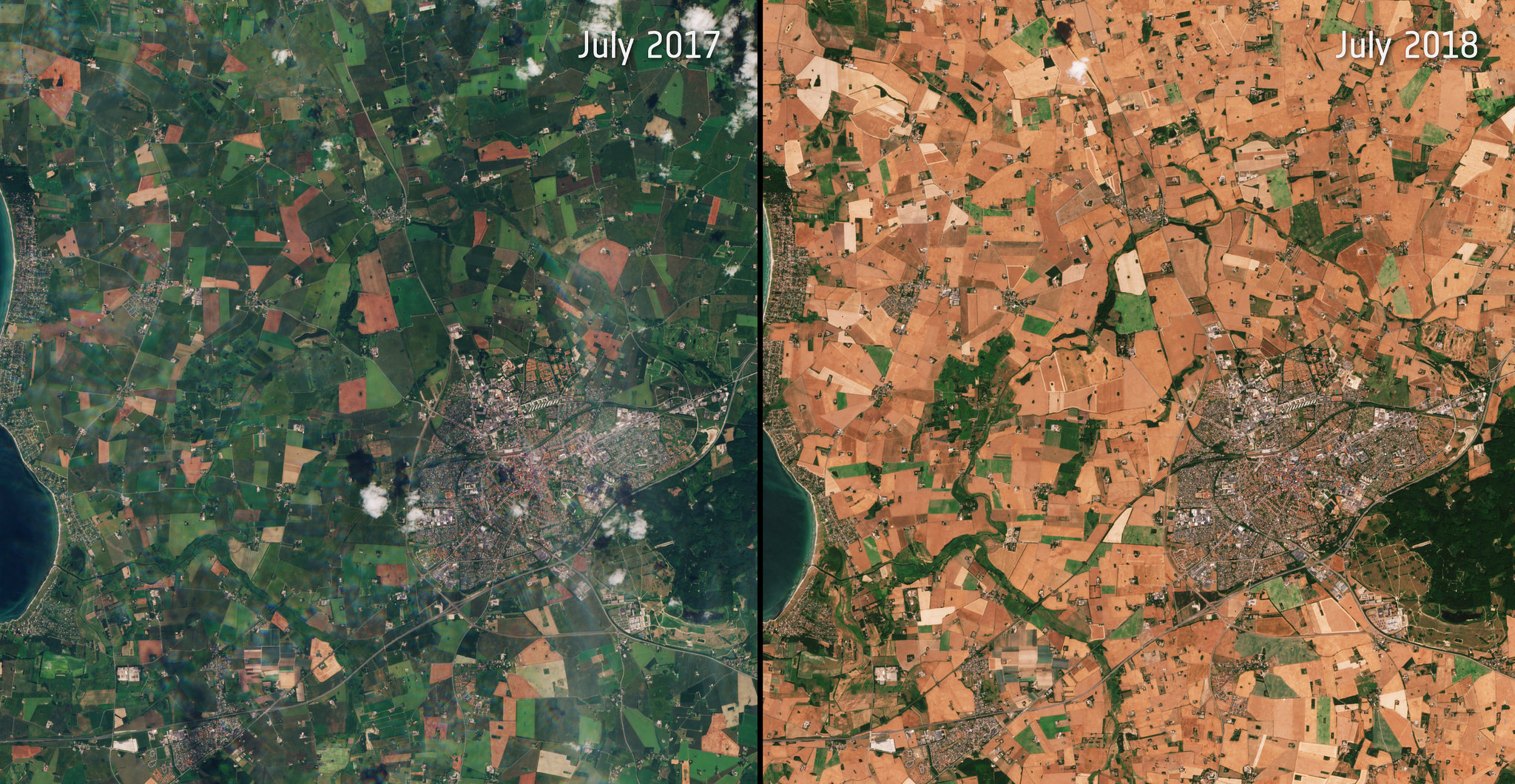 Despite these realities, there is inadequate action by most nations of the world especially the United States.  President Donald Trump dismissed the need for climate action during the G-20 summit in Japan, saying he doesn’t want to take action to confront the emergency because such a move would threaten corporate profits. As experts have warned, if we do not confront the climate emergency now, we will pay much more later.

In the 2020 election cycle, the Democratic Party is resisting climate change as an issue even though 15 of its presidential candidates, more than 50 of its member organizations in the states, and a slew of progressive organizations that make up its voting base, some armed with petitions bearing over 200,000 signatures, are calling for the Democratic National Committee to hold a separate climate-focused debate. On June 10, the executive committee of the Democratic Party in Miami-Dade County — the U.S. metropolitan area considered most vulnerable to sea-level rise — voted unanimously to urge Democrats to devote one of the 12 Democratic presidential debates to the climate crisis. 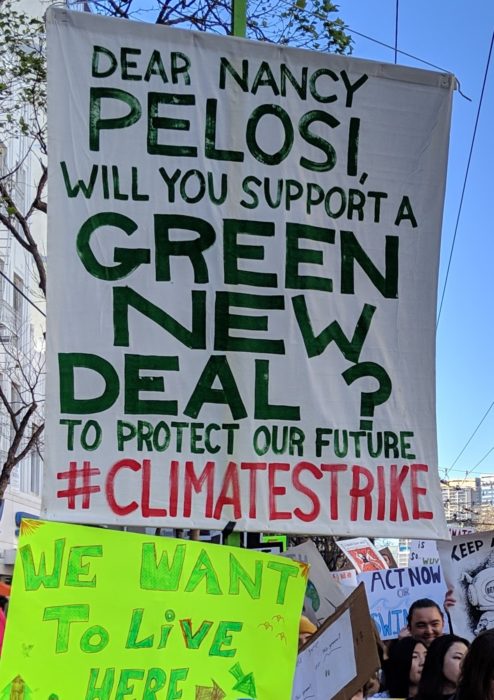 DNC Chairman Tom Perez, who rejected a climate-focused debate, tried to explain the party’s opposition in a post on Medium, saying it would be impractical to hold a single-issue forum. His refusal led to hundreds of activists sitting in at the DNC headquarters, including sleeping overnight, before the first debate, demanding a debate on climate change.

Sen. Bernie Sanders and Rep. Alexandria Ocasio-Cortez introduced a  resolution asking Congress to declare that global warming is an emergency and demanding a massive mobilization of resources to protect the U.S. economy, society and national security. They called for “a national, social, industrial, and economic mobilization of the resources and labor of the United States at a massive-scale to halt, reverse, mitigate, and prepare for the consequences of the climate emergency and to restore the climate for future generations.”

Billionaire Tom Steyer has entered the 2020 race pledging to spend $100 million and focus his campaign on climate change. In his first television advertisement, he focused on the corruption of government and the economy and on climate. He said: “You look at climate change, that is people who are saying we’d rather make money than save the world.”

Green Party candidate Howie Hawkins has put forward an ecosocialist Green New Deal that not only transitions to a clean energy economy but remakes the economy and creates an economic bill of rights while cutting the military budget by 75 percent.

The movement is building power and impacting the direction of the U.S. and the world, but the response by those supporting the status quo was shown in France recently when on the hottest day in French history climate protesters were brutally tear-gassed for demanding climate action.

This action, occurring in Paris where the Paris Climate Accord was reached, adds to the heightening of the conflict. The inadequate Paris agreement showed the movement must do more than rely on international agreements.

A longtime labor and climate activist, Jeremy Brecher, describes the climate movement entering a third phase. In the first phase, the man-made climate crisis was confirmed and the movement focused on international agreements and lobbying governments. The second phase arose when the Copenhagen agreement failed, leading to a protest movement against fossil fuel infrastructure, protests of fossil fuel corporations and against investors funding climate-destroying infrastructure.

The third phase centers around a global Green New Deal. It involves protests,  electoral demands, and challenging inaction of fossil fuel-funded politicians. He points to groups like Sunrise, Extinction Rebellion and the Student Strike for Climate as examples of this phase. It is a meta-movement that integrates, environmentalism, ecological restoration, social justice, racial equality, workers’ rights, restorative agriculture, and many other challenges to our unjust and unsustainable world order into a practical program.

Climate protests, which have been ongoing for a decade, are having victories. Recently, two major oil pipelines for carrying crude oil from Canada’s tar sands region were called into question as judges in Minnesota overturned a key approval for a proposed pipeline and Michigan’s attorney general threatened to shut down an aging pipeline under the Great Lakes. These were the latest setbacks for a series of five pipelines designed to transport tar sands that have either been canceled or delayed. The other projects include Energy East and Northern Gateway, both of which were canceled, and Trans Mountain expansion and Keystone XL pipelines, both of which are on hold. 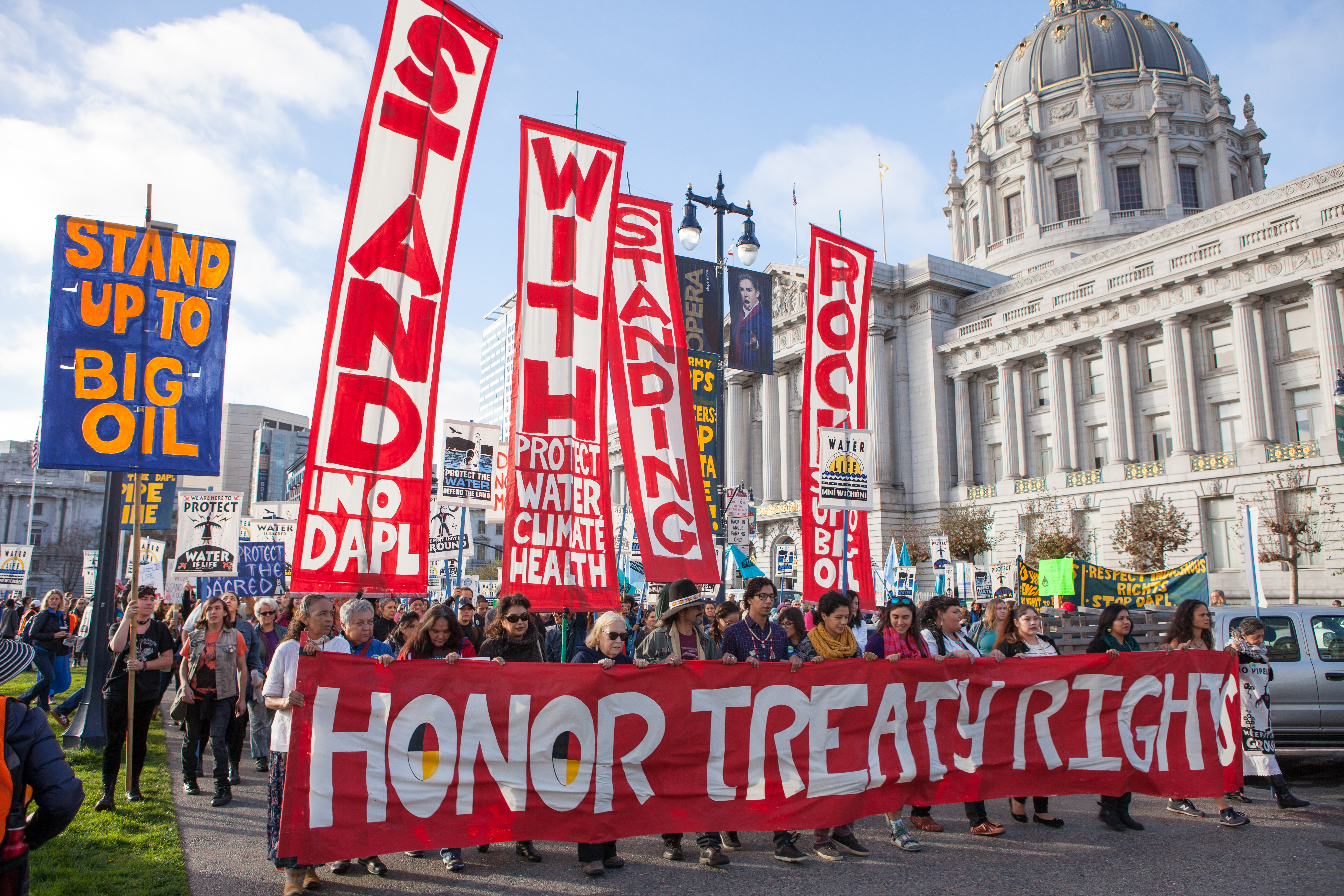 On July 13, climate activists from Beyond Extreme Energy held a protest outside Federal Energy Regulatory Commission (FERC) commissioner Cheryl LaFleur’s home in Massachusetts. They demanded that LaFleur vote “no” on all new fossil fuel infrastructure. Jordan Engel listed the 100 people responsible for killing the planet. Holding people accountable is becoming a reality in this new phase of climate activism.

People are connecting the issue of militarism with climate. In Maine, 22 people were arrested protesting spending on Navy ships urging “Fund Climate Solutions, Not Endless War.” The facts are in, the Pentagon is a top global climate polluter. Popular Resistance and other organizations are organizing the People’s Mobilization to Stop the U.S. War Machine and Save the Planet on Sept. 22 and 23, while the UN High Commission meets, and encouraging people to participate in other actions that weekend, the Climate Strike and Puerto Rican Independence Day March. In our most recent interview on Clearing the FOG, we spoke with David Schwartzman, author of “The Earth is Not For Sale,” about ending Fossil Fuel Militarized Capitalism. 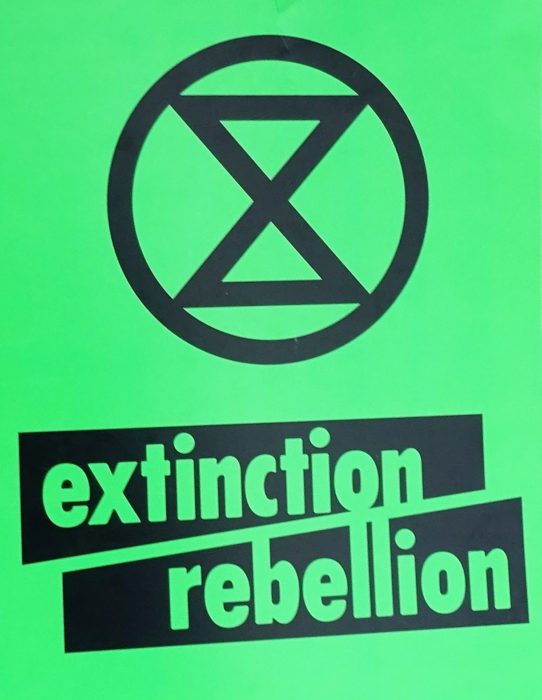 Extinction Rebellion brought the protest movement to The New York Times.  On June 24, 70 were arrested demanding the Times cover the climate crisis as a global emergency. During a sit-in on 8th Avenue they chanted “Report the urgency, this is a climate emergency!” On Monday, Extinction Rebellion D.C. demonstrated at the Capitol.

The movement continues to grow. More than 7,000 colleges and universities across the globe declared a climate emergency on July 10 committing to mobilize on the crisis.  This month, more than 70 health organizations called for urgent action on “one of the greatest threats to health America has ever faced,” calling it the “cancer of climate change.” They cite storm and flood emergencies, chronic air pollution, the spread of diseases carried by insects, and heat-related illnesses. Extreme heat has been the leading cause of weather-related deaths.

The movement is having an impact and industry and politicians know it. Long term campaigns to stop climate infrastructure, force banks and investors to divest from the fossil fuel industry and demand emergency climate policies are getting stronger.

At the beginning of July, after a meeting of OPEC in Vienna, their Secretary-General Mohammed Barkindo said, “there is a growing mass mobilization of world opinion… against oil,” children “are asking us about their future because… they see their peers on the streets campaigning against this industry.” Barkindo added the “mobilization” was “beginning to… dictate policies and corporate decisions, including investment in the industry.”

In testimony to British lawmakers this month, famed scientist and environmental advocate David Attenborough said, “We cannot be radical enough in dealing with the issues that face us at the moment. The question is: what is practically possible? How can we take the electorate with us in dealing with these things?” It is the job of the climate movement to push political systems to respond.

A version of this article first appeared on PopularResistance.org.