The sheer volume of disinformation packed into this one article is jaw-dropping, writes Caitlin Johnstone. 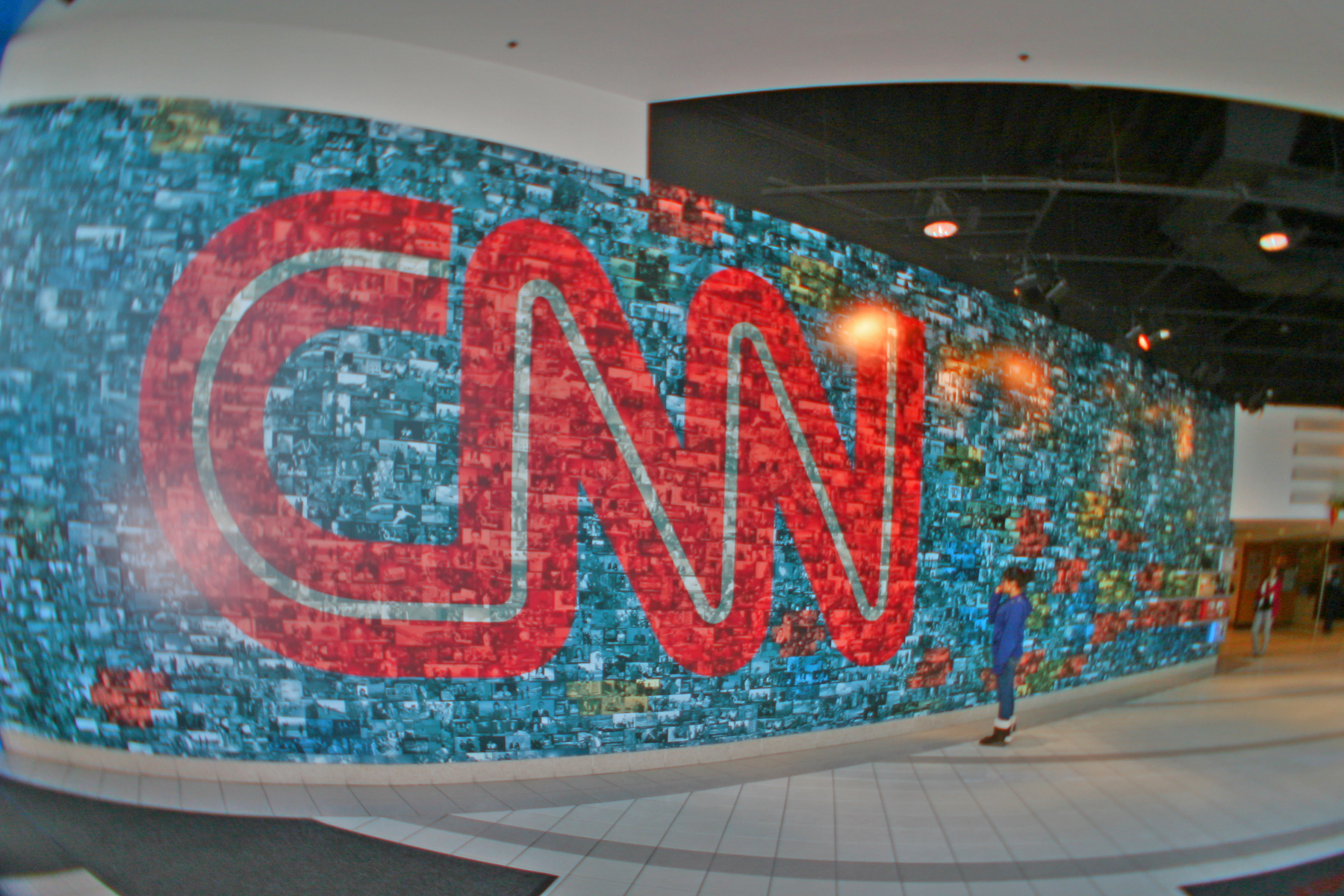 CNN has published an unbelievably brazen and dishonest smear piece on Julian Assange, easily the most egregious article of its kind since the notoriously bogus Assange-Manafort report by The Guardian last year. It contains none of the “exclusive” documents that it claims substantiate its smears, relying solely on vague, unsubstantiated assertions and easily debunked lies to paint the WikiLeaks founder in a negative light.

And let’s be clear right off the bat, it is most certainly a smear piece. The article, titled “Exclusive: Security reports reveal how Assange turned an embassy into a command post for election meddling,” admits that it exists for the sole purpose of tarnishing Assange’s reputation when it reports, with no evidence whatsoever, that while at the Ecuadorian embassy Assange once “smeared feces on the walls out of anger.” Not “reportedly.” Not “the Ecuadorian government claims.” CNN reported it as a fact, as an event that is known to have happened. This is journalistic malpractice, and it isn’t an accident.

Whenever you see any “news” report citing this claim, you are witnessing a standard smear tactic of the plutocratic media. Whenever you see them citing this claim as a concrete, verified fact, you are witnessing an especially aggressive and deliberate psyop. The Ecuadorian embassy was heavily surveilled during Assange’s stay there, and the Ecuadorian government has leaked photos of Assange’s living quarters to the media in an attempt to paint him as a messy houseguest in need of eviction, so if the “feces on the walls” event had ever transpired you would have seen photos of it, whether you wanted to or not. It never happened. 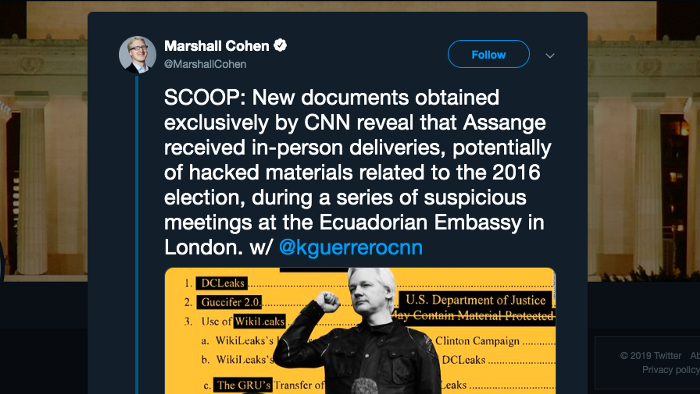 “New documents obtained exclusively by CNN reveal that WikiLeaks founder Julian Assange received in-person deliveries, potentially of hacked materials related to the 2016 US election, during a series of suspicious meetings at the Ecuadorian Embassy in London,” the article begins.

In its very first sentence the article invalidates all the claims which follow it, because its use of the word “potentially” means that none of the documents CNN purports to have contain any actual evidence. It’s worth noting at this time that there is to this day not one shred of publicly available evidence that any of the Democratic Party emails published by WikiLeaksin 2016 were in fact “hacked” at all, and could very well have been the result of a leak as asserted by former British ambassador Craig Murray, who claims to have inside knowledge on the matter. 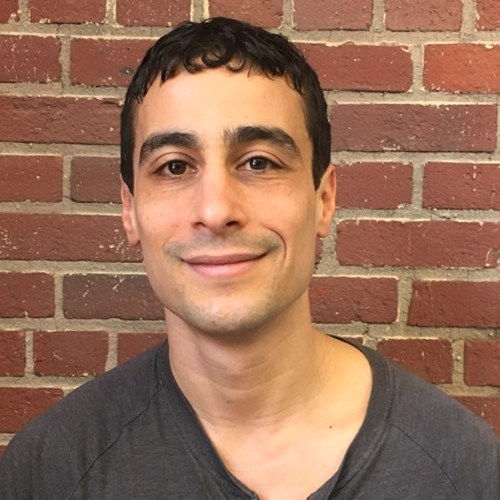 The glaring plot holes in the Mueller report’s assertions about Russia being the source of the 2016 WikiLeaks drops have already been ripped wide open by journalist Aaron Maté’s meticulous analysis of the report’s timeline in an article accurately titled “CrowdStrikeOut: Mueller’s Own Report Undercuts Its Core Russia-Meddling Claims.” The CNN smear piece, which claims to “add a new dimension to the Mueller report,” is entirely relying on this porous timeline for its reporting. Plot holes include the fact that Mueller claims (and CNN repeats) that the Russians transferred the emails to WikiLeaks on or around July 14, which Maté notes is “a full month after Assange publicly announced that he had them.”

CNN kicks off its smear piece with the inflammatory claim that “Assange met with Russians and world-class hackers at critical moments,” mentioning both “Russians” and “hackers” in the same breath in an attempt to give the impression that the two are related. It’s not until paragraph 43 and 46, long after most people have stopped reading, that the authors bother to inform their readers that the “hackers” in question are German and have no established connection to Russia whatsoever. The “Russians” counted among Assange’s scores of visitors consist of RT staff, who have always consistently reported on WikiLeaks, and a “Russian national” about whom almost nothing is known. [Sputnik’s Loud & Clear radio show reports that one Russian visitor was Assange’s producer when he had a show on RT.]

The article falsely labels Assange a “hacker,” a defamatory claim the mass media circulates whenever it wants to tarnish Assange’s reputation. Assange, of course, is a publisher. WikiLeaks publishes materials which are given to it, it doesn’t “hack” them.

.@CNN puts out the claim that @RT published articles about Podesta e-mails before @wikileaks even released them. A serious claim for which CNN scrupulously fails to provide evidence. pic.twitter.com/jrasKm9O2V

CNN also repeats the long-debunked lie that RT “published articles detailing the new batches of emails before WikiLeaks officially released them” during the 2016 election, citing no evidence because this never happened. RT reported on a WikiLeaks release in October 2016 after it had been published by WikiLeaks but before the WikiLeaks Twitter account had tweeted about it, and Western propagandists willfully conflated WikiLeaks publications with tweets from the WikiLeaks Twitter account in order to make it look like RT had insider knowledge about the publications.

In reality, RT was simply watching the WikiLeaks site closely for new releases in order to get an early scoop before other outlets, because leaks of emails involving John Podesta, chair of the Hillary Clinton 2016 presidential campaign, had been dropping regularly.

“That is a LIE that’s been debunked over and over,” tweeted RT America editor Nebojša Malic in response to the smear. “We published ONE article about the emails that were RELEASED already, just not TWEETED about yet, because WikiLeaks had been releasing them like clockwork and we paid attention. It’s called journalism, they should try it sometime.”

“Yes that is fake news,” tweeted RT’s Ivor Crotty. “I was the editor on the team that monitored wikileaks and by Podesta 6 we knew they tweeted at 9am EST each day (1pm Dublin) — so we checked the database by reverse searching and discovered a new dump, tweeted about it, and the conspiracy theorists jumped.”

“RT already addressed this in 2016, convincingly if you read the sequence of events they lay out: the Podesta emails appeared on the WikiLeaks website before WikiLeaks sent a tweet about it,” Maté tweeted at CNN’s Marshall Cohen. “Ignoring that allows for the conspiracy theory you propose. It’s ridiculous to suggest that RT-Wikileaks ‘were coordinating behind the scenes’ based on the fact that RT tweeted about the Podesta emails AFTER they appeared on WL’s site, but BEFORE WL tweeted about them. You’re implicating RT in a conspiracy… for doing journalism.”

It’s not possible to research the “RT had advance knowledge of WikiLeaks drops” conspiracy theory without running across articles which debunked it at the time, so the article’s authors were likely either knowingly lying or taking dictation from someone who was.

“Spanish newspaper El Pais on July 9: ‘Spanish security company spied on Julian Assange’s meetings with lawyers’. Add little security state propaganda and 6 days later you get from CNN: ‘How Julian Assange turned an embassy into command post for election meddling’,” noted Shadowproof managing editor Kevin Gosztola in response to the CNN smear, a reminder of how a little narrative tweaking can turn a story on its head in support of the powerful.

This would be the same CNN that told its viewers that it’s against the law to read WikiLeaks, with Democratic Party prince Chris Cuomo lying “Remember, it’s illegal to possess these stolen documents; it’s different for the media, so everything you learn about this you’re learning from us.” The same CNN that falsely reported that Assange is a pedophile not once, but twice. The same CNN that has been caught blatantly lying in its Russiagate coverage, which has had to fire journalists for misreporting Russiagate in a media environment where that almost never happens with Russia stories, which has deleted evidence of its journalistic malpractice regarding Russiagate from the internet without retraction or apology.

So this latest attempt to tarnish Julian Assange’s reputation from CNN is not surprising. Nor is it surprising that the article contains exactly zero of the “exclusive documents” which it says validate its claims and insinuations. Nor is it surprising that CNN is using invisible evidence which almost certainly came into its hands through a government agency to give weight to its smear. But the sheer volume of disinformation and deceit they were able to pack into one single article this time around was just jaw-dropping. Even for CNN.