Amid a looming succession question concerning the current sultan, Mark Curtis reviews how the Gulf state became, in effect, a giant British military and intelligence base.

Sixty years ago, Britain won a long-forgotten war in Oman, setting the special relationship between the two countries that is still being boosted today.

The anniversary falls as the head of the British army recently visited Oman, and as the two countries signed a “Comprehensive Joint Declaration on Enduring Friendship” and a new Joint Defence Agreement. Last year, the two cooperated on the U.K.’s largest military exercise in the Middle East in 20 years.

The U.K.’s growing support for Oman’s ruler, Sultan Qaboos, is as extensive as it is ignored in the British media. But a key question looms: who will succeed the sultan after his death, and will London then continue this special relationship?

The 1957-9 war in central Oman defeated an uprising threatening the rule of Sultan Said bin Taimur, one of the most repressive regimes ever seen in the Middle East. Declassified files show Britain’s chief diplomat in the region, George Middleton, recognizing that: “The condition of the people is miserable, the Sultan is unpopular, there is no central administration … and, under the present regime, not a great deal of hope for the future.” 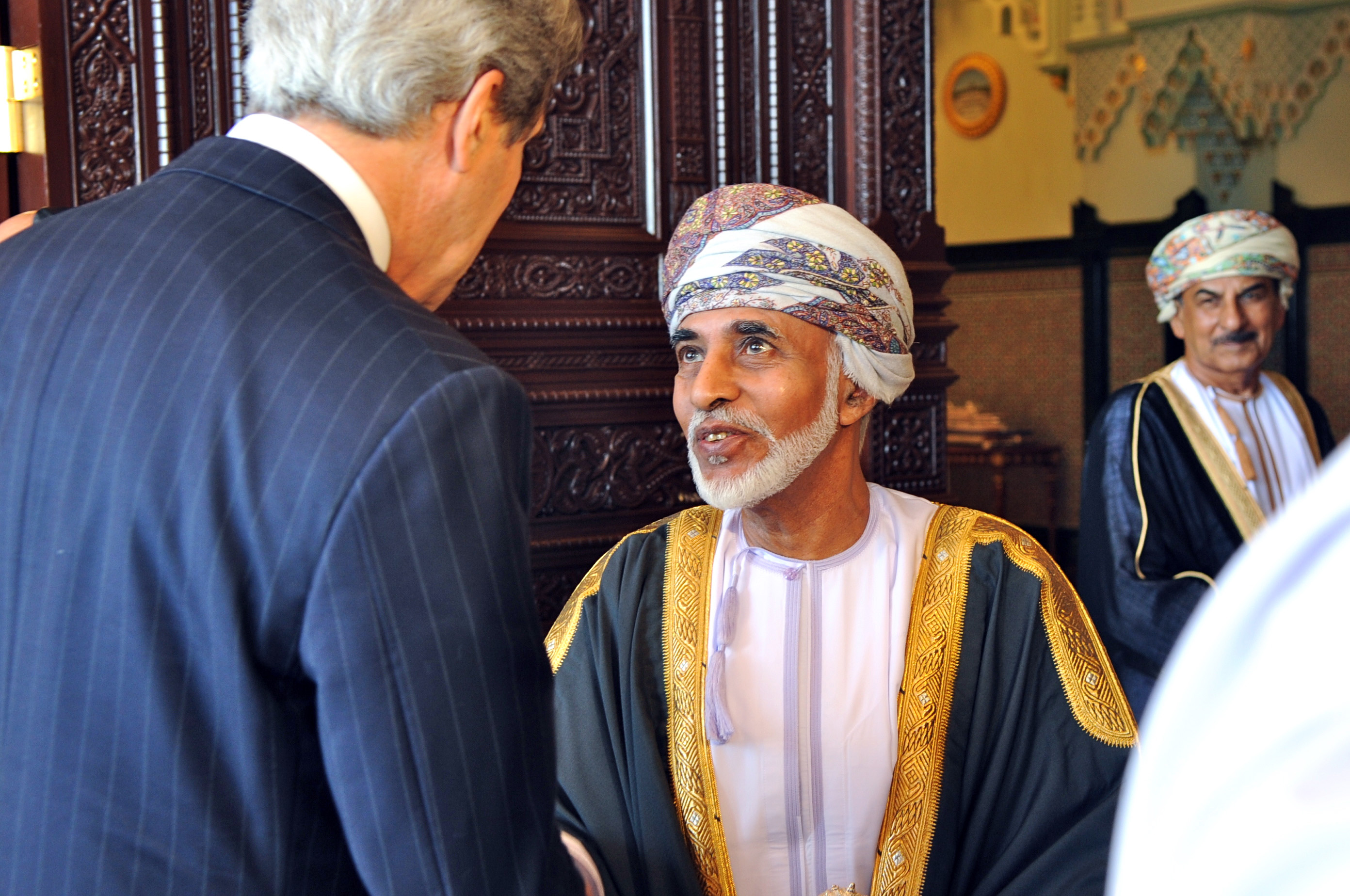 But that didn’t stop Britain from coming to the aid of the sultan, who kept hundreds of slaves at his palace in Salalah, deploying the Royal Air Force (RAF) to bomb the rebels from the air “to show the population the power of weapons at our disposal” and to convince them that “resistance will be fruitless and lead only to hardship,” the files show.

Former Prime Minister Harold Macmillan approved the bombing of water supplies and agricultural gardens – civilian targets that constitute war crimes – to “deter dissident villages from gathering their crops” and to promote “denial of water supply to selected villages by air action.” The Special Air Service was also deployed in late 1958 and captured the rebels’ final stronghold the following year.

The rebellion that broke out a few years later in Dhofar province in southern Oman also prompted British intervention. The Dhofar uprising was “an indigenous rebellion against the repression and neglect” of the sultan, the Foreign Office later privately noted.

With barely any schools or health facilities in the country, even by 1970 it was forbidden to smoke in public, to play football, to wear glasses, or to talk to anyone for more than 15 minutes. The sultan’s response to the uprising was to use even greater force – largely from British officers, who controlled Oman’s military.

When the British realized the sultan might not win the Dhofar war, their military advisers in Muscat overthrew him in a palace coup in 1970 and installed in power his son, Qaboos, who has remained there ever since. Oman became, in effect, a giant British military and intelligence base.

Files leaked by Edward Snowden show that Britain’s GCHQ has a network of three spy bases in Oman – codenamed Timpani, Guitar and Clarinet – which tap in to various undersea cables passing through the Strait of Hormuz into the Arabian Gulf. 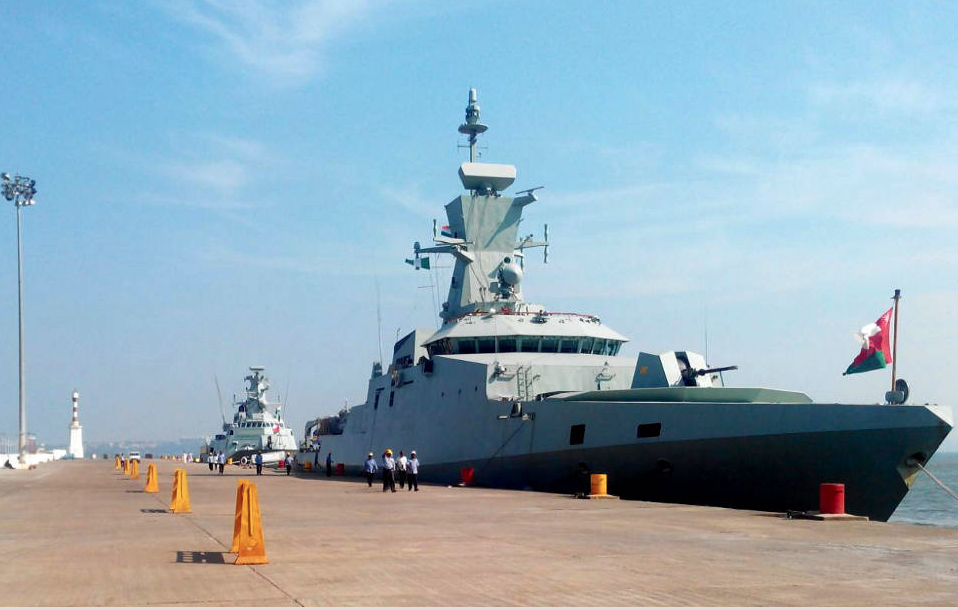 These bases intercept and process vast quantities of emails, telephone calls and web traffic. The information is then shared with the U.S. National Security Agency.

Britain has just established a large, new military base at the Duqm port complex in central Oman, which will house the two 65,000-tonne aircraft carriers being built for the Royal Navy. This will provide “a strategically important and permanent maritime base east of Suez, but outside of the Gulf” and “serve as a staging post for U.K. Carrier Strike Group deployments across the Indian Ocean.”

A new Omani-British Joint Training Area is also being established in Oman this year to facilitate a permanent British army presence in the region. The relationship is solidified, as ever, by arms exports: Oman imported $2.4 billion  worth of arms during 2014-18, of which the U.K. was the largest supplier

Costa Victoria and the surrounding Port Sultan Qaboos in Muscat, Oman, as seen from another cruise ship. (DXR, CC BY-SA via Wikimedia Commons)

These interests are tying the U.K. still further to the sultan’s regime, which is authoritarian and repressive even by Gulf standards. Political parties are banned and political meetings are likely to result in arrests. Although Oman has elections to its lower house, the body is largely toothless.

Sultan Qaboos formally holds the positions of prime minister, commander-in-chief of the armed forces, chairman of the central bank, and minister of defense, foreign affairs and finance.

While Oman has made major economic progress in recent decades, portraying it as a benign dictatorship is misleading. In 2014, a UN special rapporteur described a “pervasive culture of silence and fear affecting anyone who wants to speak and work for reforms in Oman.”

Last year, Oman introduced a new penal code that contains harsh penalties against free speech and other rights, and gives sweeping powers to authorities. It provides for jailing anyone who publishes material that poses “a challenge to the rights of the Sultan and his prerogatives, or disgraces his person” or which “undermine the stature of the State.”

Britain’s active support for the sultan’s regime was confirmed in 2017, when Middle East Eye revealed that the Police Service of Northern Ireland had run programs training Oman’s police, military and special forces in how to manage strikes and protests.

London remains silent on Oman’s human rights abuses, while stressing their “exceptionally close relationship.” Indeed, when the recently-sacked U.K. defense secretary, Gavin Williamson, was in Oman in February 2019, he praised the “statesmanship, the knowledge, the wisdom” of the sultan, even describing him as a “visionary.”

Alan Duncan, a British foreign minister, is a regular guest of the sultan and has visited Oman 24 times since 2000, according to the British parliament’s register of financial interests. These trips have been mainly paid by the sultanate. Three visits have taken place since Duncan became minister of state in July 2016.

But will Britain maintain its special relationship when the current sultan dies? Qaboos, who is 78 and has suffered from colon cancer since 2014, has no heirs and has not formally designated a successor. Oman’s Basic Law stipulates that the next leader must be a male descendant of Sayyid Turki bin Said bin Sultan, the sultan of Muscat and Oman from 1871-88.

Asaad, the deputy prime minister, regularly meets foreign diplomats on behalf of Qaboos and is believed to be the most likely successor. Asaad was, like Qaboos himself, trained at the U.K.’s military training center at Sandhurst in the 1970s before becoming an army commander.

Taimur, who is just 39, was described in a U.S. State Department cable, revealed by WikiLeaks, as “personable, affable and informal.” He studied for four years in the U.K., in Brighton, Galashiels in Scotland and London.

The U.K. will be using its connections with the coterie surrounding its current placeman in Muscat to help ensure more of the same upon Qaboos’s passing.

Britain’s exit from the European Union is prompting the British government to seek ever closer relations with its longstanding allies in the Gulf. This will continue to be at the expense of promoting positive political and economic change in the region.