To any defender of democracy and the rule of law, the threat at hand is plainly existential. A U.S. war with Iran would destroy countless lives and likely constitute an international crime. And it would herald a new phase of America’s wars in which any pretense of peace is abandoned and a militarized economy, society and culture is the open and avowed goal of the state and its political system.

To prevent this, the 2001 Authorization for Use of Military Force, passed by Congress shortly after the terrorist attacks of Sept. 11, must be repealed or struck down, as soon as possible. On Tuesday, the House Appropriations Committee voted for the repeal in a move led by Rep. Barbara Lee, the only member of Congress to vote against the AUMF in 2001.

WATCH LIVE: It’s been almost 18 years since Congress voted to approve a blank check for endless war – it’s past time for us to hold a debate & vote #StopEndlessWar! https://t.co/4OSpZn614Z

War powers possess a heavy gravity: the more they are used, the more they tend to aggrandize power from other places. Using the 2001 AUMF as the basis for an attack on Iran is likely, as it would further the aims of the war bureaucracy to take such powers entirely out of the hands of Congress. Under the executive, the war powers can be further centralized, refined, and made permanent — the framework of an imperial system of governance where a Caesar is chosen every four years; not to maintain global peace, but to perpetually advance a forever war. 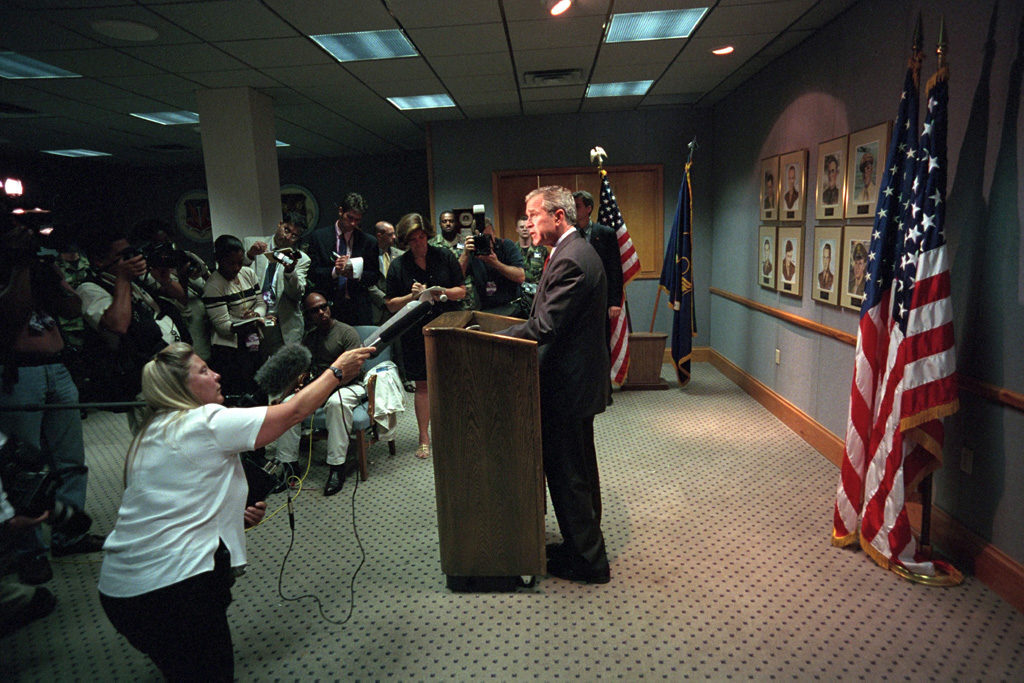 Bush speaking on Sept. 11, 2001, at Barksdale Air Force Base in Louisiana: “Make no mistake: The United States will hunt down and punish those responsible for these cowardly acts.” (Eric Draper, George W. Bush Presidential Library)

The authority to use force under the so-called 9/11 AUMF is unilateral and not subject to further review. Critically, the joint resolution by Congress provides the president with sole authority to use force as “he determines” — a sweeping grant of war-making that is unprecedented in constitutional law, without any demarcating boundary as to territory or time.

The Constitution vests Congress with the authority to start a war under Article I.  And it grants the executive the ability to prosecute that war under Article II, subject to the limits sent by Congress. The framers plainly intended this division of power. (See “The Federalist Papers No. 69,” by Alexander Hamilton.)

The 9/11 AUMF switched these default operating conditions. Now, under a sprawling “counter-terrorism” aegis the executive has sole discretion to commence a new war. War, not peace, is the default. Then the burden shifts to Congress to stop a new military action, with a two-thirds, veto proof majority. The war powers were re-written and switched. And for 18 years, no one has cared.

Yemen provides a crystal clear example of this in action. As recently as December 2018, the executive has cited “counter-terrorism” as giving it authority for involvement in Yemen (in addition to citing generic Article II authority).

In order to restrain the executive, Congress found itself in the awkward position of having to pass a resolution (S.J. 7) to forbid the executive from participation in a war zone that was never authorized. On April 16, President Donald Trump vetoed the resolution, and on May 2, Congress failed to override the veto with a two-thirds majority. Throughout the debate regarding Yemen, the entire political class seemed to blindly accept the absurdity that it was incumbent upon Congress to stop a military operation that had never been authorized with a two-thirds, veto-proof majority. 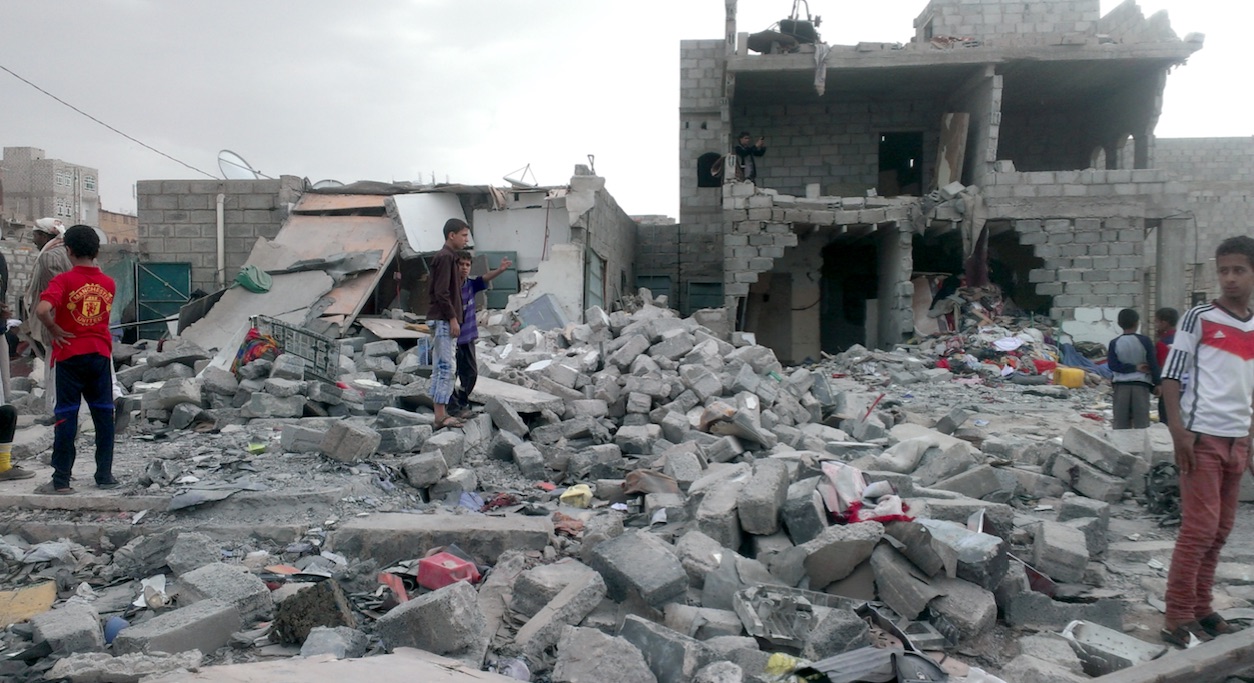 An attack on Iran premised on the 9/11 AUMF would be unconstitutional under domestic law, and an act of aggression under international law.

The 9/11 AUMF is unconstitutional because it violates the separation of powers. But even if it could be narrowly interpreted, there is no way that a military authorization designed to fight Al-Qaeda in Afghanistan, passed almost 18 years ago, provides any legitimate basis for an attack against Iran — a separate sovereign nation that has no connection to Al-Qaeda terrorists or the 9/11 attacks. Osama bin-Laden is long dead. How long will 9/11 be milked and exploited by corrupt leaders and enabling bureaucrats as an excuse for a forever war?

International law is also worth discussing. An attack on Iran without authorization from the United Nations Security Council, and not in self-defense, would constitute an act of aggression, in violation of the Nuremberg principles laid down in 1946 by the Nuremberg Tribunal. Iran poses no military threat to the United States, so self-defense is not a legal grounds for an attack. And the U.N. Security Council is unlikely to authorize U.S. military action against Iran. 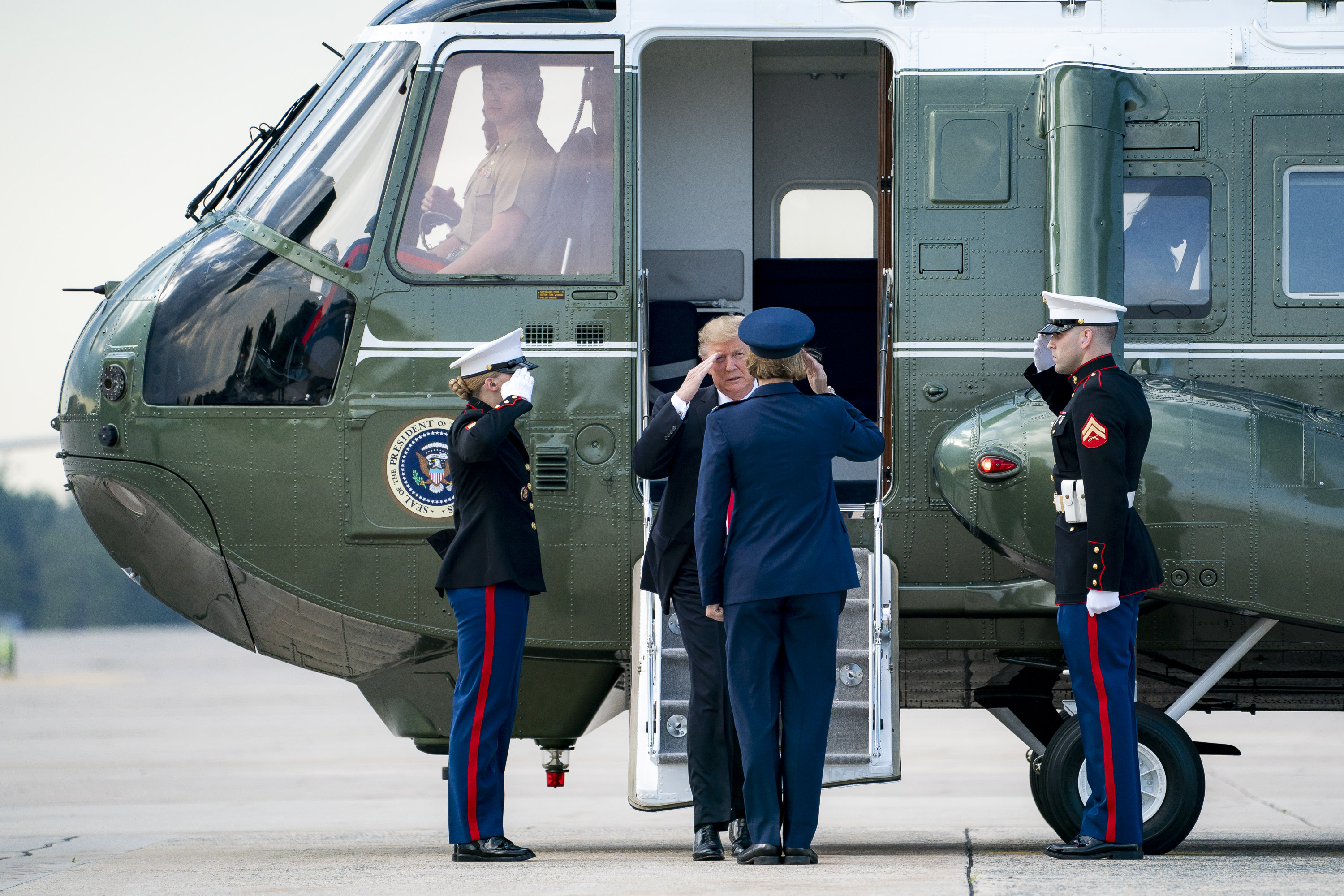 Thus, as with the invasion of Iraq, a military attack against Iran could very well be a textbook case of the crime of aggression, the supreme crime under international law. Further aggression would cause regional and great powers to see America as dangerous — a rogue imperial power heavily armed with civilization-ending nuclear weapons. It would mark the end of the current international order and give birth to a volatile interregnum or even a new order of outright war between the major powers.

Wars lasting 30 or a hundred years were supposed to be artifacts of the Middle Ages. Yet America’s forever war has now lasted almost 20, and is already the longest war in American history. It is clear that elites enjoy the power they have been given to wage war as a default mechanism of international politics. This power must now end. The unconstitutionality of the 9/11 AUMF is glaringly obvious. Congress did not have the authority to hand over its war powers to the executive in 2001. Now, either Congress or the courts must recognize what has happened, and put a stop to a rabid Executive.

Americans must reject a war with Iran, end their forever war, and enact a foreign policy that is committed to international law and human rights. They should prosecute their leaders who have committed grave international offences, including for past torture and aggression in places like Iraq. The first step is to repeal or revoke the 9/11 AUMF.

Inder Comar is the executive director of Just Atonement Inc., a legal non-profit dedicated to defending democracy and building peace and sustainability. His public law expertise involves the crime of aggression, the legality of the Iraq War, and international human rights. He holds his JD from the New York University School of Law, and an MA and BAs from Stanford University. His Twitter handle is @InderComar.