You may be certain that Syria remains a geo-strategically crucial location for the U.S. empire because its keeps working to manufacture consent for interventionism there, writes Caitlin Johnstone.

The Institute for Public Accuracy published a report Tuesday about the leaked engineering assessment from the Organisation for the Prohibition of Chemical Weapons investigation into an alleged chemical attack in Douma, Syria, which directly contradicts the findings of the official OPCW report on the matter. Until the unauthorized release of this internal document the public was kept entirely uninformed of its existence, despite the serious military consequences of the questions it raises; the official story that Syria had dropped chemical weapons on Douma was used to justify an airstrike on Syria days later.

MIT professor Theodore Postol provided IPA with a basic analysis of some of the data in the engineering assessment, adding that he would have a more detailed summary of the engineering report later this week.

“A second issue that is raised by the character of the OPCW engineering report on Douma is that it is entirely unmentioned in the report that went to the UN Security Council,” Postol concludes his analysis. “This omission is very serious, as the findings of that report are critical to the process of determining attribution. There is absolutely no reason to justify the omission of the engineering report in the OPCW account to the UN Security Council as its policy implications are of extreme importance.”

“A leaked OPCW document challenges claim that Assad used chemical weapons in Douma in April 2018, the basis for US military strikes,” tweeted journalist Aaron Maté of the new IPA report. “So far, Western media has ignored it, w/ only exceptions at the margins. Ted Postol is a leading expert; this should be impossible to ignore now.”

A leaked OPCW document challenges claim that Assad used chemical weapons in Douma in April 2018, the basis for US military strikes. So far, Western media has ignored it, w/ only exceptions at the margins. Ted Postol is a leading expert; this should be impossible to ignore now: https://t.co/jaQlyjKy6g

Hours later, the U.S. State Department issued a statement once again accusing Syria of using chemical weapons, and now when you search Google for information on chemical weapons in Syria, the results you get look like this: 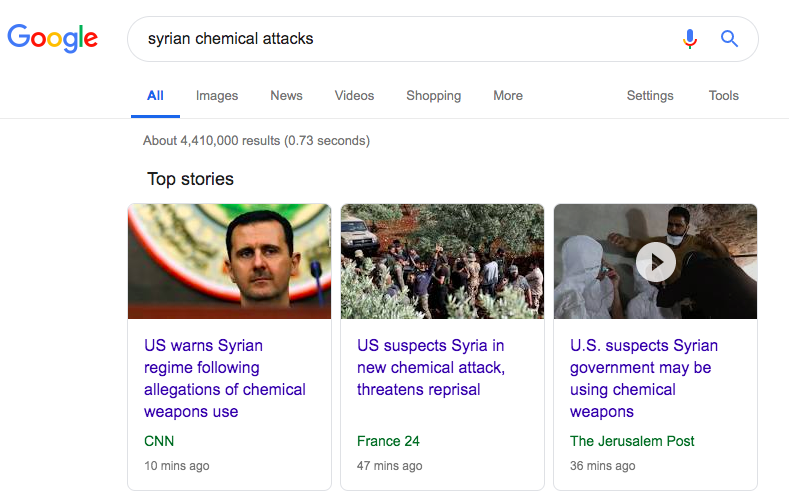 The State Department’s release reads like a government trying to regain control of an important narrative. It begins with an unsubstantiated allegation of a chlorine gas attack by the Syrian government this past Sunday, and warns that the U.S. and its allies will respond militarily if chemical weapons have been used. It condemns Syria’s offensive to recapture the Al Qaeda-occupied Idlib province, then veers off into accusing Moscow of lying about the White Helmets and citing the OPCW as a trustworthy source of authority:

As I wrote the other day, the fact that the OPCW kept the engineering report from receiving not a whisper of attention severely undermines the organization’s credibility, not just with regard to Douma but with regard to everything, including the establishment Syria narrative as a whole and the Skripal case in the U.K. Everything the OPCW has ever concluded about alleged chemical usage around the world is now subject to very legitimate skepticism, and now the State Department is trying to use this same dubious source in its narrative control campaign against a government long targeted by the U.S. empire for regime change.

“Assad once again proving he’s either a total fool or just the biggest troll in history,” Off-Guardian tweeted sarcastically in response to the State Department’s allegations. “In the midst of the scandal over the OPCW repressing evidence that the Douma chemical attack was staged, Bashar just goes and does another one.”

#Assad once again proving he's either a total fool or just the biggest troll in history.

In the midst of the scandal over the #OPCW repressing evidence that the #Douma chemical attack was staged, Bashar just goes and does another one. #covenienttiminghttps://t.co/U9M0FGITvs

“The US can’t attack Iran so it’s going to unleash its impotent rage on Syria,” tweeted journalist Sharmine Narwani. “One false flag CW attack by US-trained terrorists coming up.”

The notion that Syria would use chemical weapons at this stage in the game is even more nonsensical than it was at the time of the Douma allegations in April 2018. President Bashar al-Assad has recaptured far more territory from the Western-backed extremist factions, the eventual full recapture of the nation by Syria and its allies is a foregone conclusion barring direct military intervention by the U.S. empire, and now the Western imperialists are even beginning to lose the narrative war as well. There’s no reason to believe Assad would use chemical weapons at this point in the game unless you sincerely believe that he gains some sort of sexual gratification from committing war crimes that is so powerful it overwhelms his most basic survival instincts. 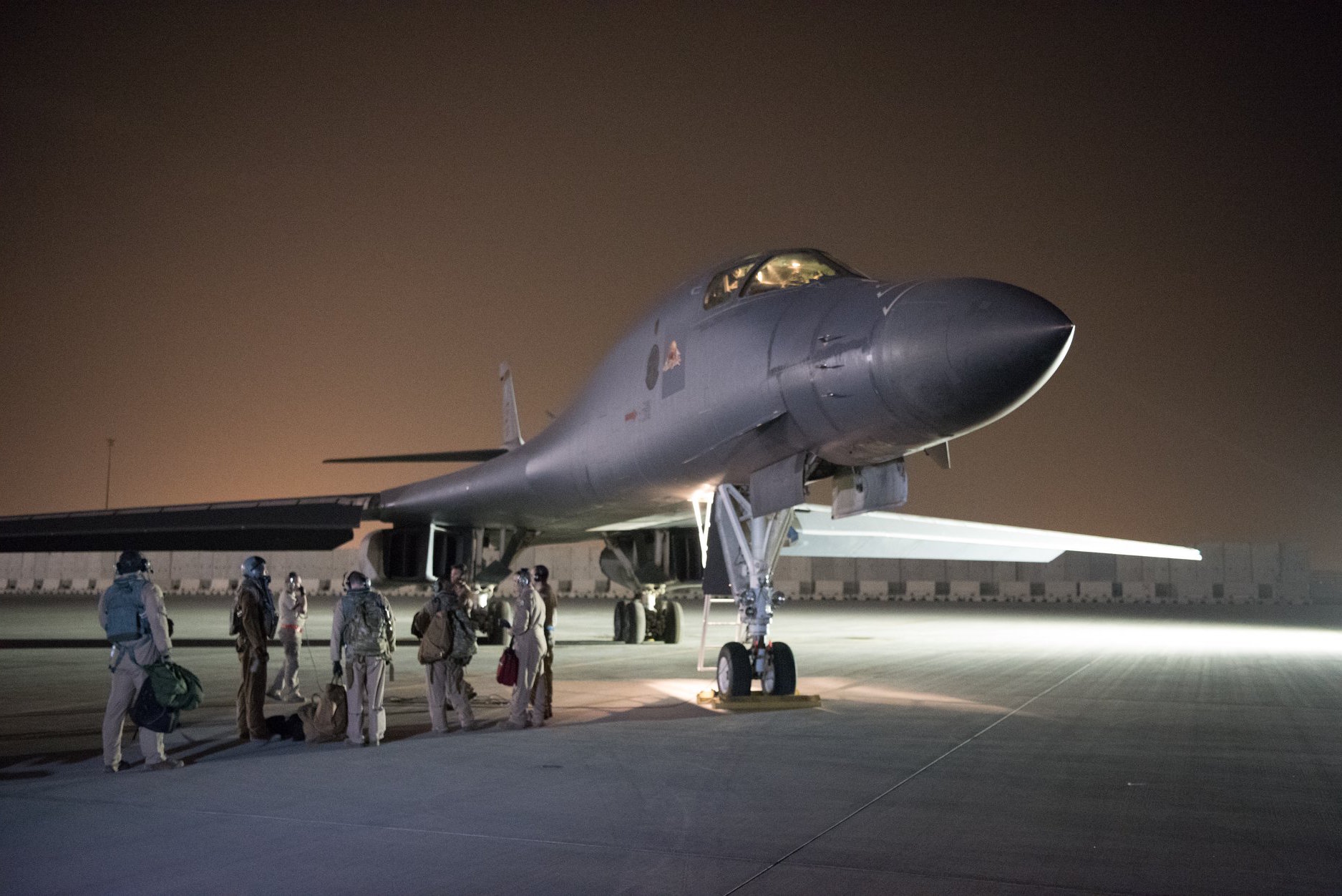 U.S. bomber prepares to launch a strike mission from Al Udeid AIr Base, Qatar, April 13, 2018, in support of the multinational response to reports of Syria recent use of chemical weapons. (U.S. Air Force/Phil Speck)

Chemical weapons, particularly chlorine gas, are not an efficient way of killing people. As Moon of Alabama once put it, “Chemical warfare is ineffective. That is why everyone agreed to ban it.” There is nothing about chemical weapons that is inherently more horrific than, say, nuclear weapons. The difference is that they’re just not a very efficient way of killing a large number of people, whereas nuclear weapons are. Syria and its allies have been securing military victory after military victory over the occupying militias that had taken over large territories, and they have been doing so using far more effective conventional munitions. Assad would stand absolutely nothing to gain and absolutely everything to lose by using chemical warfare now.

At this point you almost wish America would just pick a target and stick with it. The U.S. war machine is like a belligerent drunk at a pub with a broken bottle in his hand, menacing customer after customer while everyone silently prays he has a few more drinks and passes out on the floor. From Iran to Venezuela to Syria and other places, the agenda to bully all the world’s nations into allowing themselves to be absorbed into the blob of the U.S.-centralized empire is causing conflict after conflict all around the globe, with devastating consequences for civilians caught in the crossfire.

You may be certain that Syria remains a geo-strategically crucial location for the empire because they keep working on manufacturing consent for interventionism there. They work to manufacture that consent because they need that consent; if everyone saw their government doing horrific things they widely disapproved of, the illusion of freedom and democracy would be shattered, and they’d lose their ability to propagandize the masses. Without the ability to propagandize the masses, they could not rule.

The good news is that we can slow them down by using truth to disrupt their use of their narrative control arsenal. The bad news is that they’re as depraved and determined as ever.