Russia-gate has shed any premise of being about Russian interference, writes Daniel Lazare,  but the idea that America may in anyway be responsible for its own fate is of course unthinkable.

Americans used to think that Russia-gate was about a plot to hack the 2016 election.  They were wrong.  Russia-gate is really about an immense conspiracy to do four things:

No. 1: Ratchet up tensions with Russia to ever more dangerous levels;

No. 2: Show that Democrats are even more useless than people imagined;

No. 4: Re-elect Donald Trump as president.

This was the takeaway from Mitch McConnell’s devastating “case closed” speech last week in which the Senate majority leader jeered at President Barack Obama for mocking Mitt Romney’s claim (seven years ago now) that Russia was America’s “number one geopolitical foe.”  As Obama famously replied during that presidential debate: “The 1980s are now calling to ask for their foreign policy back because the Cold War’s been over for 20 years.”

But that was so 2012.  Now, says McConnell, it looks like Romney was right:

“We’d have been better off if the administration hadn’t swept [Russian President Vladimir] Putin’s invasion and occupation of Georgia under the rug or looked away as Russia forced out western NGO’s and cracked down on civil society.  If President Obama hadn’t let Assad trample his red line in Syria or embraced Putin’s fake deal on chemical weapons, if the Obama administration had responded firmly to Putin’s invasion and occupation of Ukraine in 2014, to the assassination of Boris Nemtsov in 2015, and to Russia intervention in Syria — maybe stronger leadership would have left the Kremlin less emboldened, maybe tampering with our democracy wouldn’t have seemed so very tempting.

“Instead,” McConnell went on, “the previous administration sent the Kremlin a signal they could get away with almost anything, almost anything.  So is it surprising that we got the brazen interference detailed in special counsel Mueller’s report?”

Like so much out of Congress these days, this was a farrago of lies and distortions.  It wasn’t Moscow that started the 2008 Russo-Georgian War, but Tbilisi.  While Russia has indeed cracked down on U.S.-backed NGO’s, Washington has done the same by forcing Russia’s highly successful news agency RT to register as a foreign agent and by sentencing Maria Butina, a Russian national studying at American University, to 18 months in prison for the crime of hobnobbing with members of the National Rifle Association. The charge that Syrian President Bashar al Assad “trampled” Obama’s red line by using chemical weapons is hardly as clear-cut as imperial propagandists like to believe – to say the least – while the agreement between Putin and former Secretary of State John Kerry to rid Syria of chemical weapons was not fake at all, but an example, increasingly rare unfortunately, of diplomacy being used to prevent an international crisis from getting out of hand. 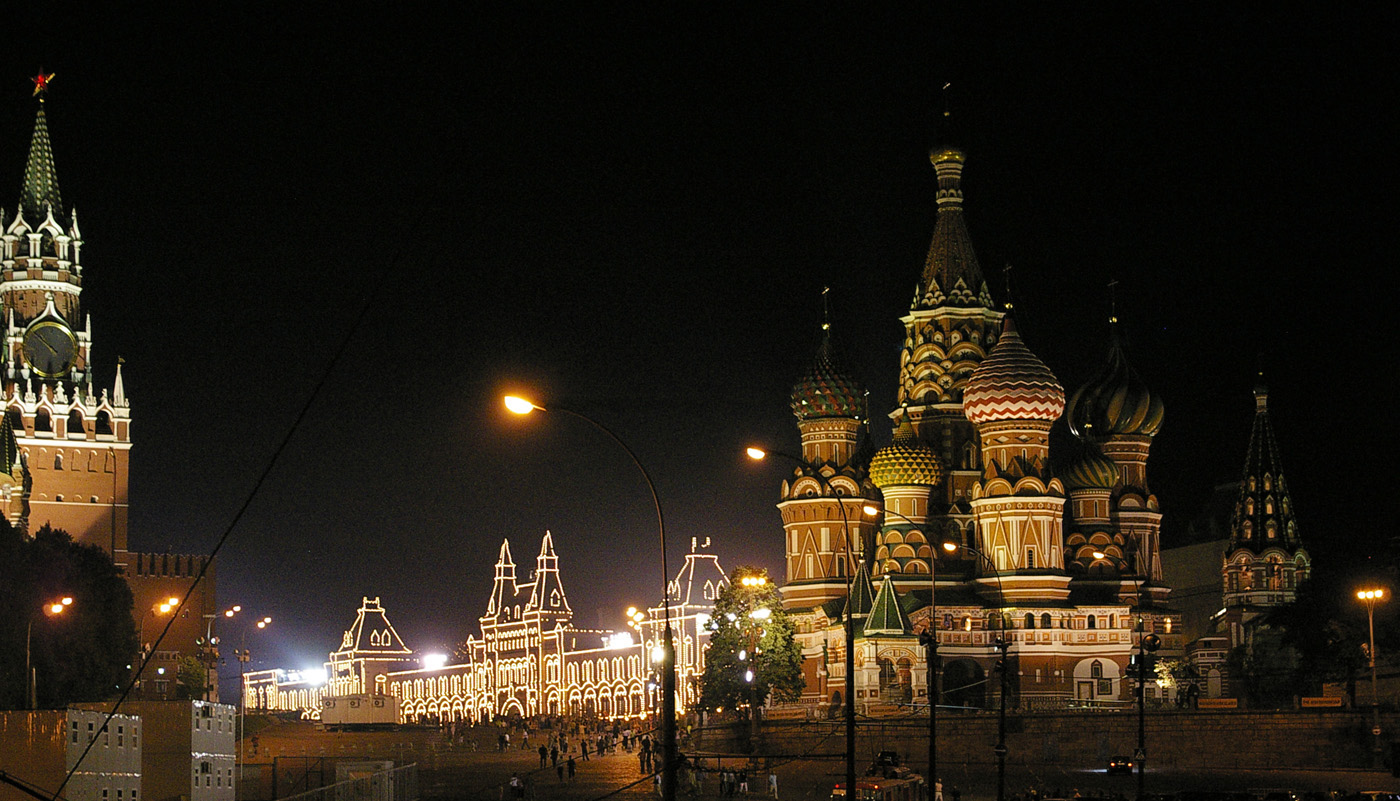 And so on ad nauseum.  But what could Democrats say in response given that they’ve spent the last three years trying to out-hawk the GOP?  Answer: nothing.  All they could do was try to turn tables on McConnell by charging him with not being anti-Russian enough.  Thus, New York’s Sen. Chuck Schumer accused him of “aiding and abetting” Moscow while Democratic Sen. Dick Durbin accused him of running interference for Putin because he “feels the Russians were on the side of the Republicans in 2016 and just might be again in 2020.”

The result: a Democratic consensus that Russia can’t be trusted and that America must put itself on a war footing to prevent Putin from “toppl[ing] the mighty oak that has been our republic for two hundred years,” as Schumer put it. It’s an across-the-board agreement that the long-awaited Mueller report has only strengthened by regurgitating the intelligence-community line that “[t]he Russian government interfered in the 2016 presidential election in sweeping and systematic fashion” and then cherry-picking the facts to fit its preconceived thesis.  (See “Top Ten Questions About the Mueller Report,” May 6.)

Democrats claim to oppose National Security Advisor John Bolton, Secretary of State Mike Pompeo and Vice President Mike Pence, but the anti-Russian hysteria they promote strengthens the hand of such super-hawks.  It makes military conflict more likely, if not with Russia then with perceived Russian surrogates such as  Venezuela or Iran. 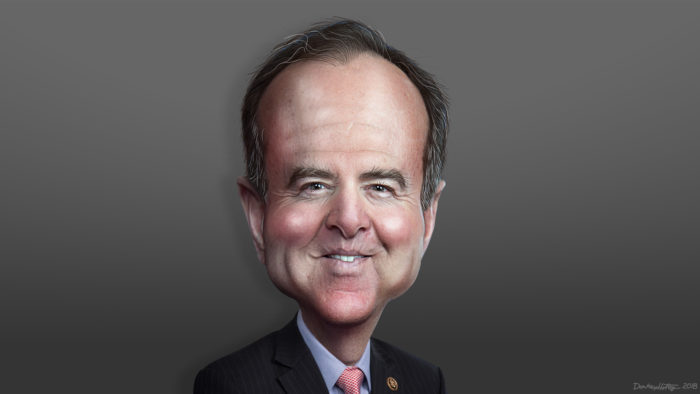 Simultaneously, it backfires on Democrats by making them look weak and foolish as they argue that even though the Mueller report says “the investigation did not establish that members of the Trump Campaign conspired or coordinated with the Russian government,” somehow “significant evidence of collusion” still exists, as an increasingly unhinged Rep. Adam Schiff maintains.  In the Alice-in-Wonderland world of congressional Democrats, no evidence does not mean no evidence.  In fact, it means the opposite.

Voters are unmoved.  Ten times more Americans – 80 versus 8 percent – care about healthcare than about Russia according to a recent survey.  When CNN pollsters asked a thousand people in mid-March to name the issues that matter most, not one mentioned Russia or the Mueller probe. If they didn’t care when collusion was still an open question, they care even less now that the only issue is obstruction plus a phony constitutional crisis that desperate Democrats have conjured up out of thin air.

Besides Fox News – whose ratings have soared while Russia-obsessed CNN’s have plummeted – the chief beneficiary is Trump.  Post-Mueller, the man has the wind in his sails.  Come 2020, Sen. Bernie Sanders could cut through his phony populism with ease.  But if Jeff Bezos’s Washington Post succeeds in tarring him with Russia the same way it tried to tar Trump, then the Democratic nominee will be a bland centrist whom the incumbent will happily bludgeon.  Former Vice President Joe Biden – the John McCain-loving, speech-slurring, child-fondler who was for a wall along the Mexican border before he was against it – will end up as a bug splat on the Orange One’s windshield. 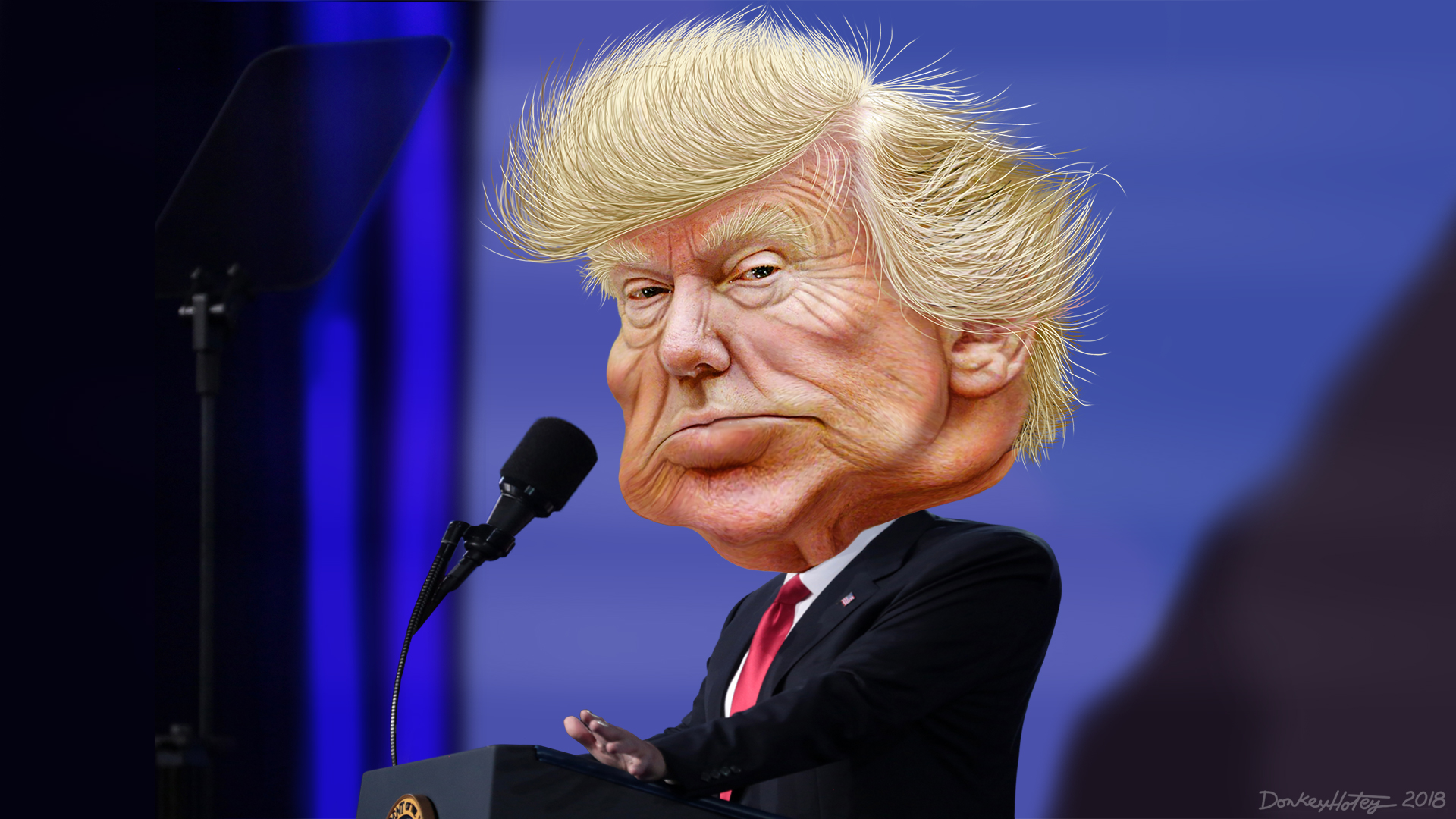 Trump ready to take on challengers. (Caricature/DonkeyHotey via Flickr)

Beto O’Rourke, the rich-kid airhead who declared shortly before the Mueller report was released that Trump, “beyond the shadow of a doubt, sought to … collude with the Russian government,” will not fare much better.  Sen. Elizabeth Warren meanwhile seems to be tripping over her own two feet as she predicts one moment that Trump is heading to jail, declares the next that voters don’t care about the Mueller report because they’re too concerned with bread-and-butter issues, and then calls for dragging Congress into the impeachment morass regardless.

Such “logic” is lost on voters, so it seems to be a safe bet that enough will stay home next Election Day to allow the rough beast to slouch towards Bethlehem yet again.

Assange Convicted in Eyes of Press

Then there’s Julian Assange, currently serving a 50-week sentence in a supermax prison outside of London after being ejected from the Ecuadorian Embassy.  By claiming that the WikiLeaks founder was “dissembling” by denying that Russia was the source of the mammoth Democratic National Committee leak in July 2016, Special Counsel Robert Mueller has effectively convicted him in the eyes of Congress and the press.

The New York Times thus reports that Mueller has “revealed” that Russian intelligence was the source while, in a venomous piece by Middlebury College professor Allison Stanger, The Washington Post declared that Assange “is neither whistleblower nor journalist,” but someone who helped Russian intelligence interfere in “the American electoral process.”

Schumer thus greeted Assange’s April 11 arrest by tweeting his “hope [that] he will soon be held to account for his meddling in our elections on behalf of Putin and the Russian government,” while, in a truly chilling statement, Democratic Sen. Joe Manchin of West Virginia declared that “[i]t will be really good to get him back on United States soil [so] we can get the facts and the truth from him.”

Now that Julian Assange has been arrested, I hope he will soon be held to account for his meddling in our elections on behalf of Putin and the Russian government.

Assange is guiltier than ever.  If Washington gets its hands on him, he’ll no doubt be hauled before some sort of Star Chamber and then clapped in a dungeon somewhere until he confesses that Russian intelligence made him do it, even though a careful reading of the Mueller report strongly suggests the opposite. (See “The ‘Guccifer 2.0’ Gaps in Mueller’s Full Report,” April 18.)

Assange languishing behind bars, war breaking out in Latin America or the Persian Gulf, Trump in the Oval Office for four years more – it’s the worst of all possible worlds, and the Democratic Party’s bizarre fixation with Vladimir Putin is what’s pushing it.

Ultimately, Russia-gate is yet a variation on the tired old theme of American innocence.  If something goes wrong, it can’t be the fault of decent Americans who, as we all know, are too good for our deeply flawed world.  Rather, it must be the fault of dastardly foreigners trying to hack our democracy.  It’s a deep-rooted form of xenophobia that has fueled everything from the criminalization of marijuana (smuggled in by evil Mexicans) to the 1950s Red Scare (a reaction to Communism smuggled in by evil Russians), and the war on terrorism (the work of evil Muslims).  The idea that America may in anyway be responsible for its own fate is of course unthinkable.

But Russia-gate may be the greatest delusion of all.  After decades of celebrating Donald Trump as the essence of American flash and hustle, the corporate media have decided that the only way he could have gotten into the White House is if Putin put him there.  The upshot is a giant conspiracy to force Americans to turn their back on reality, an effort that can only end in disaster for all concerned, Democrats first and foremost.