Like Team Mueller’s indictment last July of Russian agents, the full report reveals questions about Wikileaks’ role that much of the media has been ignoring, writes Daniel Lazare.

As official Washington pores over the Gospel According to Saint Robert, an all-important fact about the Mueller report has gotten lost in the shuffle.  Just as the Christian gospels were filled with holes, the latest version is too – particularly with regard to WikiLeaks and Julian Assange.

The five pages that the special prosecutor’s report devotes to WikiLeaks are essentially lifted from Mueller’s indictment last July of 12 members of the Russian military intelligence agency known as the GRU.  It charges that after hacking the Democratic National Committee, the GRU used a specially-created online persona known as Guccifer 2.0 to transfer a gigabyte’s worth of stolen emails to WikiLeaks just as the 2016 Democratic National Convention was approaching.  Four days after opening the encrypted file, the indictment says, “Organization 1 [i.e. WikiLeaks] released over 20,000 emails and other documents stolen from the DNC network by the Conspirators [i.e. the GRU].”

Mueller’s report says the same thing, but with the added twist that Assange then tried to cover up the GRU’s role by suggesting that murdered Democratic National Committee staffer Seth Rich may have been the source and by telling a congressman that the DNC email heist was an “inside job” and that he had “physical proof” that the material was not from Russian.

All of which is manna from heaven for corporate news outlets eager to pile on Assange, now behind bars in London.  An April 11, 2019, New York Times news analysis, for instance, declared that “[c]ourt documents have revealed that it was Russian intelligence – using the Guccifer persona – that provided Mr. Assange thousands of emails hacked from the Democratic National Committee,” while another Times article published shortly after his arrest accuses the WikiLeaks founder of “promoting a false cover story about the source of the leaks.”

But there’s a problem: it ain’t necessarily so.  The official story that the GRU is the source doesn’t hold water, as a timeline from mid-2016 shows.  Here are the key events based on the GRU indictment and the Mueller report:

According to Mueller and obsequious news outlets like the Times, the sequence is clear: Guccifer sends archive, WikiLeaks receives archive, WikiLeaks accesses archive, WikiLeaks publishes archive.  Donald Trump may not have colluded with Russia, but Julian Assange plainly did. [Attorney General Will Barr, significantly calling WikiLeaks a publisher, said at his Thursday press conference: “Under applicable law, publication of these types of materials would not be criminal unless the publisher also participated in the underlying hacking conspiracy.”]

The narrative raises questions that the press studiously avoids.  Why, for instance, would Assange announce on June 12 that a big disclosure is on the way before hearing from the supposed source?  Was there a prior communication that Mueller has not disclosed? What about the reference to “new material” on June 22 – does that mean Assange already had other material in hand?  After opening the Guccifer file on July 18, why would he publish it just four days later?  Would that give WikiLeaks enough time to review some 28,000 documents to insure they’re genuine?

“If a single one of those emails had been shown to be maliciously altered,” blogger Mark F. McCarty observes, “Wikileaks’ reputation would have been in tatters.” There’s also the question that an investigator known as Adam Carter poses in Disobedient Media:  why would Guccifer brag about giving WikiLeaks“thousands of files” that he wouldn’t send for another month?

The narrative doesn’t make sense – a fact that is crucially important now that Assange is fighting for his freedom in the U.K.  New Yorker staff writer Raffi Khatchadourian sounded a rare note of caution last summer when he warned that little about Guccifer 2.0 adds up.  While claiming to be the source for some of WikiLeaks’ most explosive emails, the material he released on his own had proved mostly worthless – 20 documents that he “said were from the DNC but which were almost surely not,” as Khatchadourian puts it, a purported Hillary Clinton dossier that “was nothing of the sort,” screenshots of emails so blurry as to be “unreadable,” and so forth. 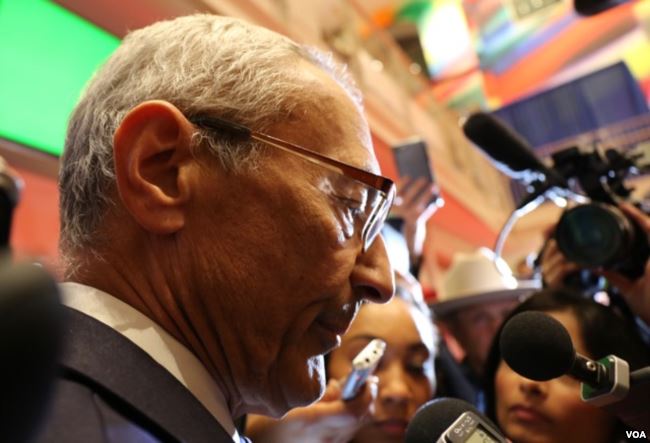 John Podesta: Target of a phishing expedition. (Voice of America via Wikimedia Commons)

While insisting that “our source is not the Russian government and it is not a state party, Assange told Khatchadourian that the source was not Guccifer either.  “We received quite a lot of submissions of material that was already published in the rest of the press, and people seemingly submitted the Guccifer archives,” he said somewhat cryptically. “We didn’t publish them.  They were already published.”  When Khatchadourian asked why he didn’t put the material out regardless, he replied that “the material from Guccifer 2.0 – or on WordPress – we didn’t have the resources to independently verify.”

No Time for Vetting

So four days was indeed too short a time to subject the Guccifer file to proper vetting.  Of course, Mueller no doubt regards this as more “dissembling,” as his report describes it.  Yet WikiLeaks has never been caught in a lie for the simple reason that honesty and credibility are all-important for a group that promises to protect anonymous leakers who supply it with official secrets.  (See “Inside WikiLeaks: Working with the Publisher that Changed the World,” Consortium News, July 19, 2018.)  Mueller, by contrast, has a rich history of mendacity going back to his days as FBI director when he sought to cover up the Saudi role in 9/11 and assured Congress on the eve of the 2003 invasion that Iraqi weapons of mass destruction pose “a clear threat to our national security.” 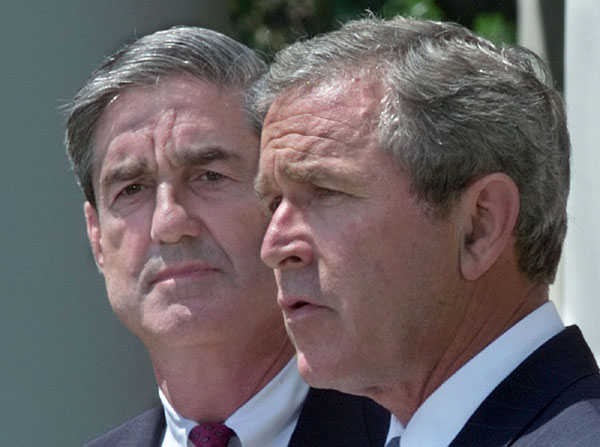 Mueller with President George W. Bush on July 5, 2001, as he is being appointed FBI director. (White House)

So if the Mueller narrative doesn’t hold up, the charge of dissembling doesn’t either. Indeed, as ex-federal prosecutor Andrew C. McCarthy observes in The National Review, the fact that the feds have charged Assange with unauthorized access to a government computer rather than conspiring with the Kremlin could be a sign that Team Mueller is less than confident it can prove collusion beyond a reasonable doubt.  As he puts it, the GRU indictment “was more like a press release than a charging instrument” because the special prosecutor knew that the chances were zero that Russian intelligence agents would surrender to a U.S. court.

Indeed, when Mueller charged 13 employees and three companies owned by Russian businessman Yevgeny Prigozhin with interfering in the 2016 election, he clearly didn’t expect them to surrender either. Thus, his team seemed taken aback when one of the alleged “troll farms” showed up in Washington asking to be heard.  The prosecution’s initial response, as McCarthy put it, was to seek a delay “on the astonishing ground that the defendant has not been properly served – notwithstanding that the defendant has shown up in court and asked to be arraigned.” When that didn’t work, prosecutors tried to limit Concord’s access to some 3.2 million pieces of evidence on the grounds that the documents are too “sensitive” for Russian eyes to see.  If they are again unsuccessful, they may have no choice but to drop the charges entirely, resulting in yet another “public relations disaster” for the Russia-gate investigation.

None of which bodes well for Mueller or the news organizations that worship at his shrine. After blowing the Russia-gate story all these years, why does the Times continue to slander the one news organization that tells the truth?

← Behind the Omar Outrage: Suppressed History of 9/11
CN Radio—Episode 7: Francis Boyle on Extradition of Julian Assange →