The increasingly aggressive moves by Trump’s hawkish advisers give the impression of a palace coup, writes Patrick Lawrence.

Neoconservative hawks in the Trump administration, led by National Security Advisor John Bolton and Secretary of State Mike Pompeo, moved swiftly to usurp control of U.S. foreign policy last week. Iran, Venezuela, North Korea, China: In all four cases, the president has been effectively sidelined on defense and national security questions in what begins to resemble a palace coup.

Global tensions now escalate by the day; so does the risk of military confrontation, notably but not only with Iran. There have long been indications that President Donald Trump is at odds with many of his foreign policy advisers. This internal conflict broke into the open last Thursday, when the Washington Post published leaked accounts of White House warfare.

“The president’s dissatisfaction has crystallized around national security adviser John Bolton,” the Post reported, “and what Trump has groused is an interventionist stance at odds with his view that the United States should stay out of foreign quagmires.” 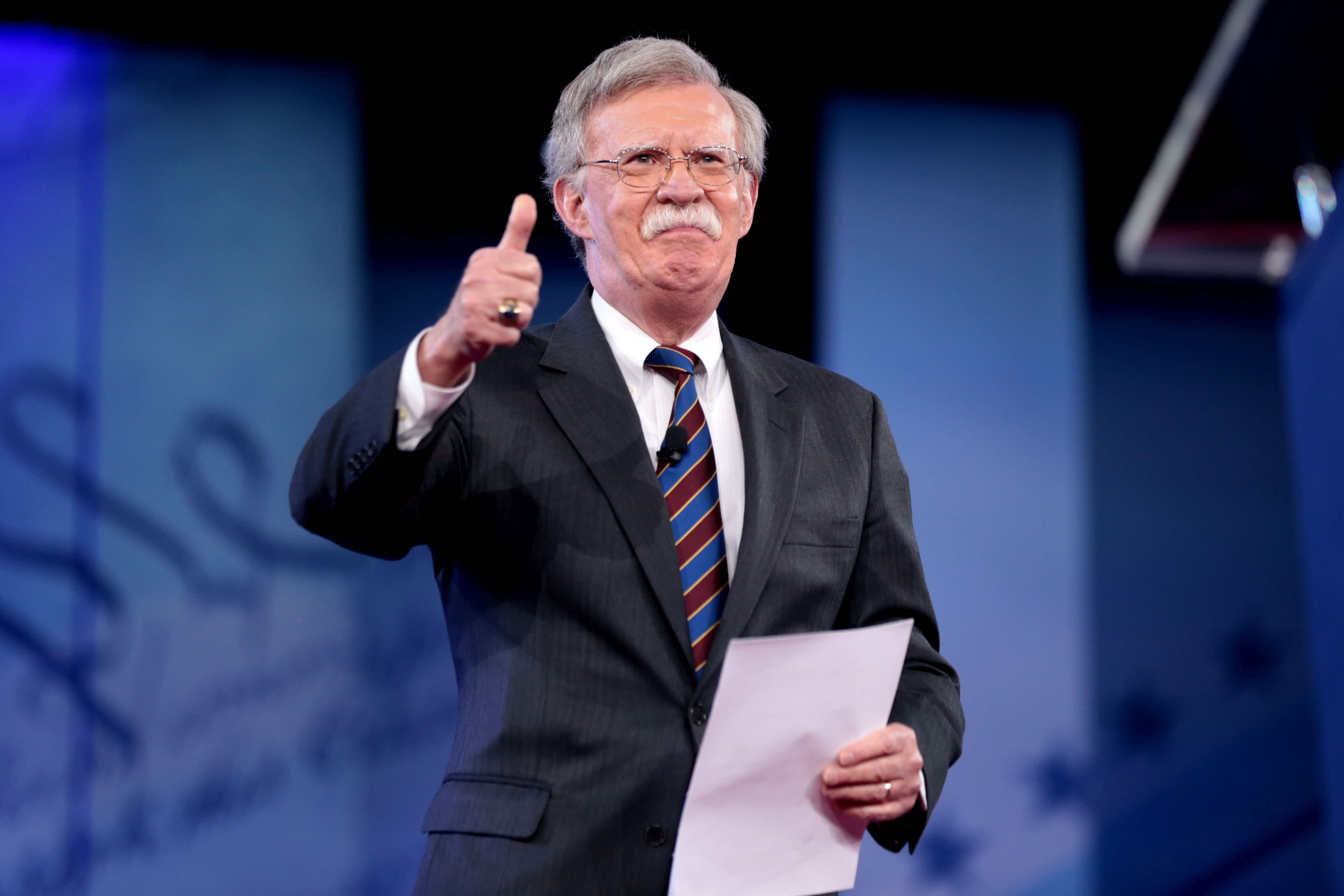 Immediately at issue between Trump and Bolton is the administration’s recently failed attempt to depose Nicolás Maduro, Venezuela’s president. To be clear, Trump is not the peacenik of the piece: As the Post reported, he is dissatisfied with Bolton because the planned coup in Caracas has not proven swift, clean, and risk-free, as the national security adviser apparently promised it would. A quagmire now beckons.

But the president’s feud with the Bolton–Pompeo axis and those in the Washington bureaucracy allied with it, extends well beyond Venezuela. The extremist neoconservatives among his advisers and elsewhere in his administration have consistently foiled Trump’s efforts to negotiate with Tehran and Pyongyang — for a revised nuclear accord with the former, a denuclearization agreement with the latter. Last week the administration’s hawkish wing made Trump’s chances of diplomatic settlements with Iran and North Korea even more remote. As he works toward a comprehensive trade accord with China, the Pentagon appears intent on provoking Beijing in the South China Sea.

Bolton opened the week with an announcement that a carrier group and Air Force bombers would deploy to the Persian Gulf “to send a clear and unmistakable message to the Iranian regime that any attack on United States interests or on those of our allies will be met with unrelenting force.”  Bolton cited “troubling and escalatory indications and warnings” without offering evidence of either.

Two days later, Pompeo made an unannounced visit to Baghdad to brief Iraqi officials on the administration’s new move against Iran. Pompeo cited the same “credible threat” as Bolton — but again without offering evidence of it. In a statement released Friday, the Pentagon said it was also sending a Patriot antimissile system to the Persian Gulf and that the week’s activity was the start of a series of deployments in the region.

There is some informed speculation, as yet unconfirmed, that Israel — which has long wanted to draw the U.S. into an open conflict with Iran — provided the intelligence Bolton and Pompeo appeared to be acting upon. By Friday, The New York Times was citing “American and allied intelligence officials” in its news reports explaining the background of the new deployments.

It is almost pitiable to watch as Trump tries to hold his ground against the hawks who surround him. On Wednesday he announced broad new sanctions to block Iran’s exports of iron, steel, and other metals, which account for about 10 percent of Iran’s export revenue. It was a nonlethal, business-related tightening of the screw, and Trump made his intentions plain later in the week. “What they should be doing is calling me up, sitting down, and we can make a deal, a fair deal,” Trump said. That is a good description of just what the Bolton–Pompeo axis is determined to prevent. 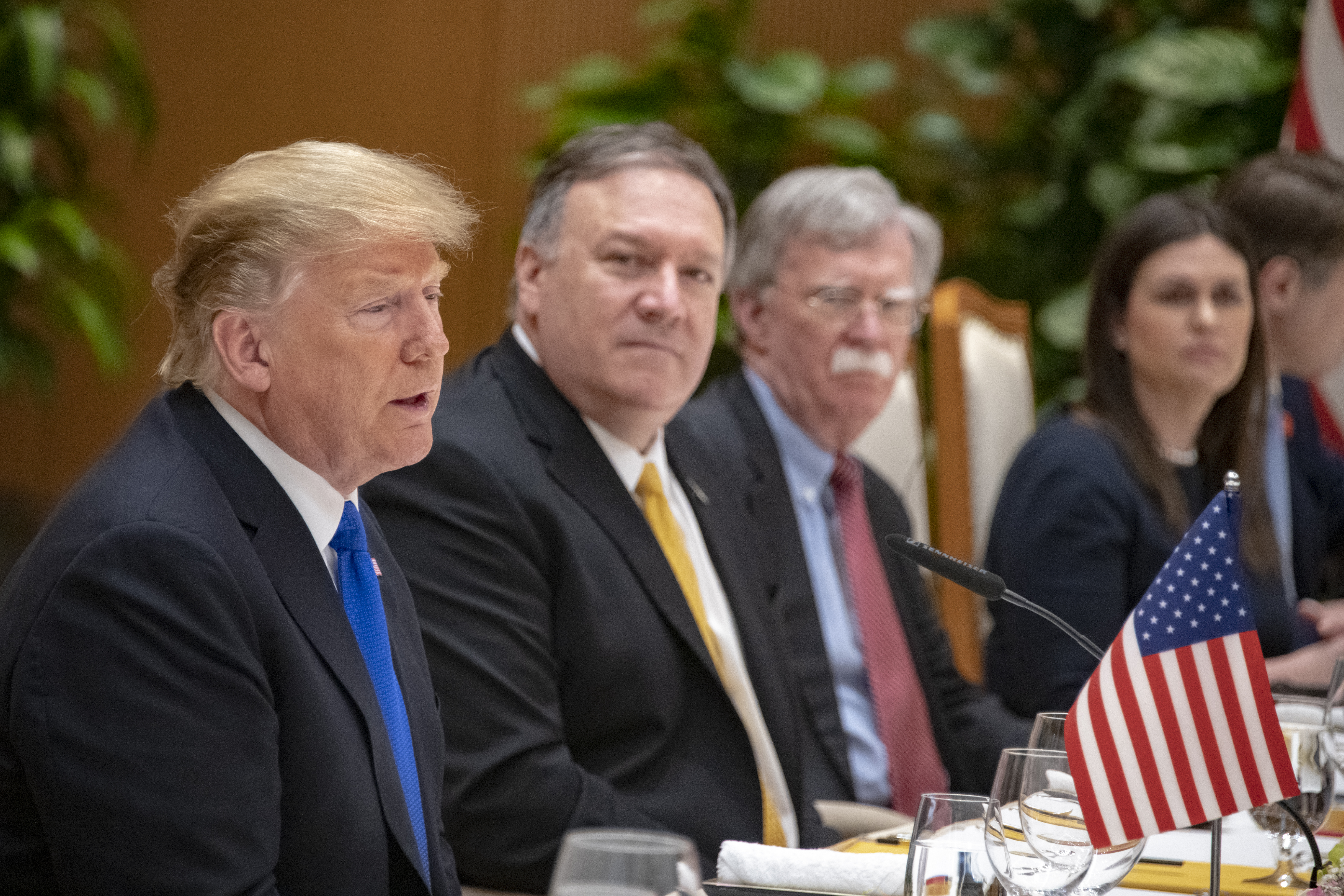 Tensions with North Korea also escalate. Pyongyang is still smarting from the failure of Trump’s February summit with Kim Jong-un, the North Korean leader — another Bolton–Pompeo design. Pyongyang tested short-range missiles twice last week. The Justice Department quickly announced that the U.S. was impounding a North Korean cargo ship that had allegedly violated sanctions when it carried a shipment of coal to Indonesia last year. It is difficult to imagine the Justice Department’s timing was coincidental; whether or not it was an intentional response to the missile tests, the seizure pushed Trump’s ambition to negotiate with Kim further into the deep freeze.

The China case is a big-screen variant of the others. While Trump is pressing Beijing hard for a trade deal — he announced additional tariffs on Chinese goods last Friday — the military appears to be escalating its challenges to China’s maritime claims in the South China Sea. Last week two U.S. warships sailed waters over which China asserts jurisdiction, prompting Beijing to charge heatedly that the U.S. was violating its sovereignty. At best the Pentagon is indifferent to Trump’s negotiating efforts; at worst it opposes them.

Bolton, Pompeo, and those in their camp have two apparent intentions as they effectively isolate Trump on the foreign policy side. One is to override international law with American diktats. The other — most evident now in the Iranian case — is to provoke a retaliatory move that will serve as a casus belli justifying U.S. military action. Rarely in the postwar period, if ever, has Washington manifest this degree of undisguised belligerence in its foreign policy objectives.

It is safe to assume we are not on the precipice of immediate war with any of the nations Bolton and Pompeo have so far singled out. The Washington Post report on Bolton’s contretemps with Trump indicates that administration hawks are turning leery of military intervention in Venezuela — even as they keep military intervention “on the table.”

Tehran announced last week that it would begin withdrawing from some of the commitments it agreed in the 2015 nuclear accord, but it has so far been careful to remain within the pact’s terms. “Iran and the U.S. are not headed toward a war,” the Financial Times quoted an Iranian official as stating at the end of the week, “but we may witness some clashes that would then lead to negotiations rather than a full-scale war.”

That assessment holds for now but may prove too optimistic. The pace of policy escalation, now that Trump has lost control in his own administration, is quickening. Given what Bolton and Pompeo got done in a week, it is impossible to predict how aggressively they will make use of the latitude they have recently claimed for themselves.

It has been clear for some time that Trump’s confrontation with his policy minders was inevitable from the start. He campaigned in 2015–16 on a disruptive foreign policy platform. Improved ties with Russia, an end to wars of adventure, negotiations with adversaries rather than potentially explosive confrontations: These were among Trump’s bedrock positions, and they provoked opposition within Washington’s permanent bureaucracy — call it the Deep State if you like — as soon as Trump took the Republican nomination.

If there is a surprise in the administration now, it does not lie in the emergence of the Bolton–Pompeo axis. Something like it was never more than just beneath the surface in the Trump White House. The surprise lies in Trump’s persistence in the face of unrelenting resistance from those wedded to the fantasy of eternal American primacy.

Patrick Lawrence, a correspondent abroad for many years, chiefly for the International Herald Tribune, is a columnist, essayist, author, and lecturer. His most recent book is “Time No Longer: Americans After the American Century” (Yale). Follow him @thefloutist. Visit his website here.  Support his work via The Floutist.

29 comments for “PATRICK LAWRENCE: A Week of Dangerous Developments from Iran to North Korea”