Moon Jae-in’s Oval Office meeting with President Donald Trump last Thursday marked an important step forward for both leaders. The South Korean president appears to have drawn Trump away from the all-or-nothing “big deal” he proposed when he last met Kim Jong-un — an offer we now know was intended to precipitate the North Korean leader’s rejection. Trump won, too: The encounter with Moon has effectively put the Dealmaker back on his feet after the calamitous collapse of the second Trump–Kim summit in Hanoi two months ago. A top-down agreement on the North’s denuclearization is once again within reach. 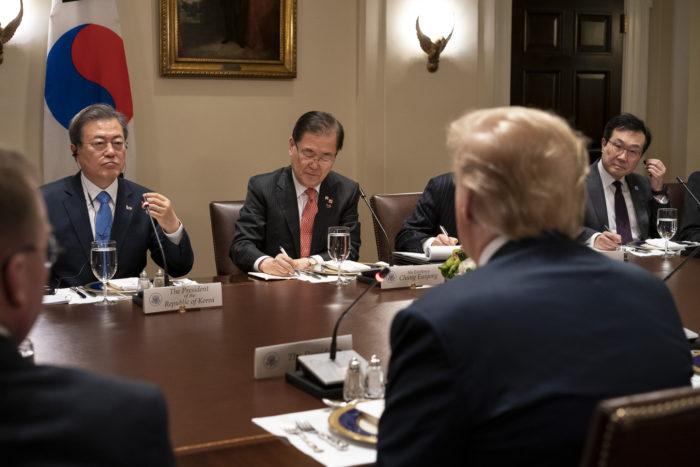 The importance of the Moon–Trump summit, while eclipsed by news of Julian Assange’s arrest in London the same day, is not be underestimated. Even before receiving Moon, Trump announced for the first time that he is willing to summit with Kim for a third time. While still stressing the North’s complete denuclearization as the U.S. objective, Trump also said he is open to the incremental diplomacy he precluded with his everything-at-once offer in Hanoi.

“There are various smaller deals that maybe could happen,” Trump said before he and Moon withdrew to the Oval Office. “Things could happen. You can work out step-by-step pieces, but at this moment we are still talking about the big deal.”

This new stance is a big deal in itself. Moon and Kim — with Chinese and Russian support — have advocated talks based on gradualist reciprocity from the first. “Action for action,” Moon calls it. This strategy is widely accepted at the other end of the Pacific as the only plausible path to a sustainable denuclearization agreement. The U.S. has been the only nation engaged on the Korean question to argue otherwise.

In addition, Trump appeared to signal that Moon may get something he dearly wanted when he arrived in Washington: dispensation to proceed with inter–Korean economic projects — including transport links, an industrial park, and a joint-venture resort in the North — that are now blocked by a plethora of U.S. and UN–imposed sanctions. Moon views these as essential confidence-builders and the first steps toward integrating the North into a Northeast Asian economic hub that will also include South Korea, China, and the Russian Far East. 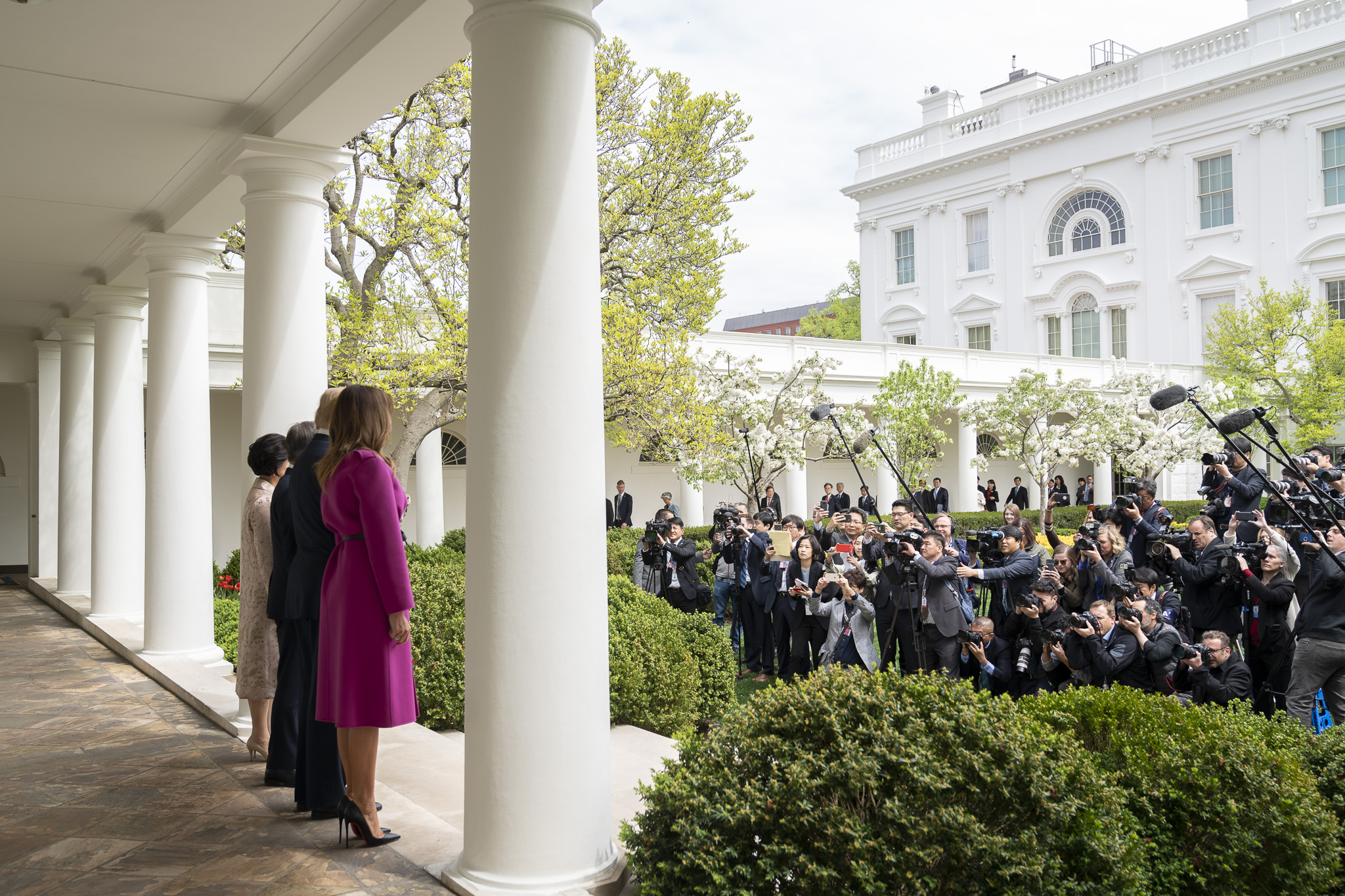 In Pyongyang, Kim responded to the events in Washington when he addressed the Supreme People’s Assembly last Friday. The speech was carefully balanced between optimism and caution, the latter reflecting Kim’s view that he was betrayed in Hanoi when Trump marshaled an offer he could not possibly embrace. “I am willing to accept if the United States proposes a third North Korea — United States summit,” Kim told North’s legislative body, “on condition that it has a right attitude and seeks a solution that we can share.”

Kim had other things to add. “We don’t like — and we are not interested in — the United States’ way of dialogue, in which it tries to unilaterally push through its demands,” he said. “We don’t welcome — and we have no intention of repeating—the kind of summit meetings like the one held in Hanoi.” The North Korean leader went on to set a year-end deadline “for the United States to make a bold decision.”

While Washington and Pyongyang had sharply conflicting versions of what transpired in Hanoi — each blaming the other for the summit’s failure — there is now little question that the U.S. side was at fault. A post–Hanoi Reuters exclusive reports that, prior to their famously canceled lunch, Trump handed Kim a sheet of paper listing, in English and Korean, extensive U.S. conditions that began with “a blunt call for the transfer of Pyongyang’s nuclear weapons and bomb fuel to the United States,” according to the piece filed by Leslie Broughton and David Brunnstrom.

In simple terms, this was a kitchen-sink proposition — effectively a demand for unilateral disarmament — that was intended to prompt Kim to walk away. The Reuters reporters suggest that the fatal gambit was the work of John Bolton, Trump’s hyper-hawkish national security advisor. They quote North Korean officials as also implicating Secretary of State Mike Pompeo, another administration hawk, in what amounts to an act of diplomatic sabotage. The device used was Bolton’s “Libya model,” a laden reference if ever there was one. When Muammar Gaddafi gave up his chemical and nuclear weapons programs in 2003, he did so by sending Libya’s nuclear materials and equipment to the U.S. Eight years later, of course, he was assassinated in the wake of a NATO bombing campaign led by the U.S. 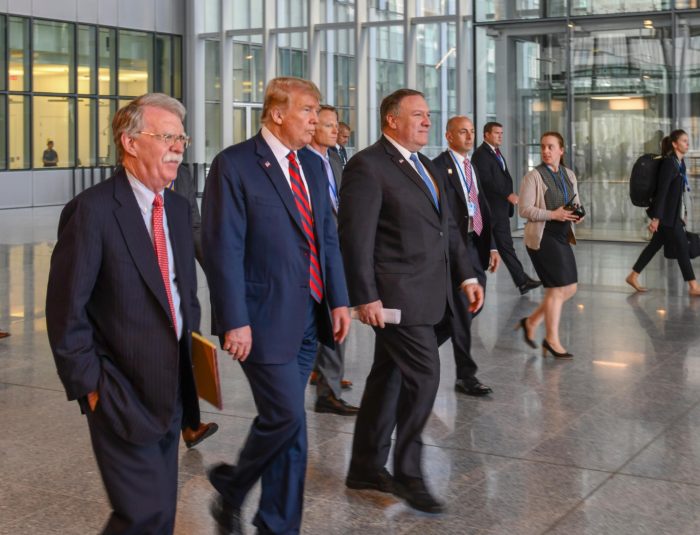 “The document appeared to represent Bolton’s long-held and hardline ‘Libya model’ of denuclearization that North Korea has rejected repeatedly,” Broughton and Brunnstrom report. “It probably would have been seen by Kim as insulting and provocative, analysts said.” One of those analysts was Jenny Town, a North Korea specialist at the Stimson Center in Washington. “‘This is what Bolton wanted from the beginning and it clearly wasn’t going to work,’” Reuters quotes Town as observing. “‘If the U.S. was really serious about negotiations, they would have learned already that this wasn’t an approach they could take.’”

As this record of the Hanoi proceedings makes plain, Trump and Moon will assume formidable challenges to the extent they agree to work together toward a resolution of the Korea question on new terms. It is not clear why Trump — who went to Hanoi eager to cut his “big deal” with Kim — accepted the Bolton-inspired design and handed it on to the North Korean leader. But he has now set himself up for another in what appears to be a long line of conflicts with his foreign policy minders, Bolton and Pompeo chief among them.

The outlook in this connection is mixed at best. Trump was able to overrule new sanctions against North Korea that were announced several weeks after the Hanoi debacle. It is a matter of interpretation, but he effectively lost a battle with the Bolton–Pompeo axis when the administration designated the Iran Revolutionary Guard Corps a terrorist organization earlier this month. That move is understood widely to have pushed renewed negotiations with Tehran, for which Trump had been hoping, well beyond the point of no return.

For Moon, the challenges ahead are two. Most immediately, he must keep both Trump and Kim seated at the chess table between now and the end of the year. If no third summit is set by then, Kim has already signaled, he will consider this chapter in the long history of U.S.–North Korean negotiations closed — another story of failure. In such a case, the question facing Moon could hardly be more daunting: Can a South Korean leader determined to end nearly seven decades of enmity between the Koreas decisively wrest control of the diplomatic process from the U.S.?

That would amount to an unprecedented showdown between Seoul and Washington. Despite Moon’s admirable dedication, this is unlikely to materialize — not in the near term, in any case. Moon has formidable allies in Beijing and Moscow; Kim is plainly eager to break North Korea out of its isolation. But the U.S., perfectly satisfied to act as “spoiler” in Northeast Asia (as elsewhere), remains too powerful an obstacle despite the many signs that it is in the sunset phase of its global preeminence.

← Assange’s Judge a Disgrace to the Bench, Ex-UK Ambassador Says
If Your Country Were Committing War Crimes Would You Want to Know? →