WikiLeaks has quoted a “high-level” Ecuadorian government source as saying that Julian Assange could be imminently expelled from Ecuador’s London embassy and that Quito has an agreement with the UK to arrest him. 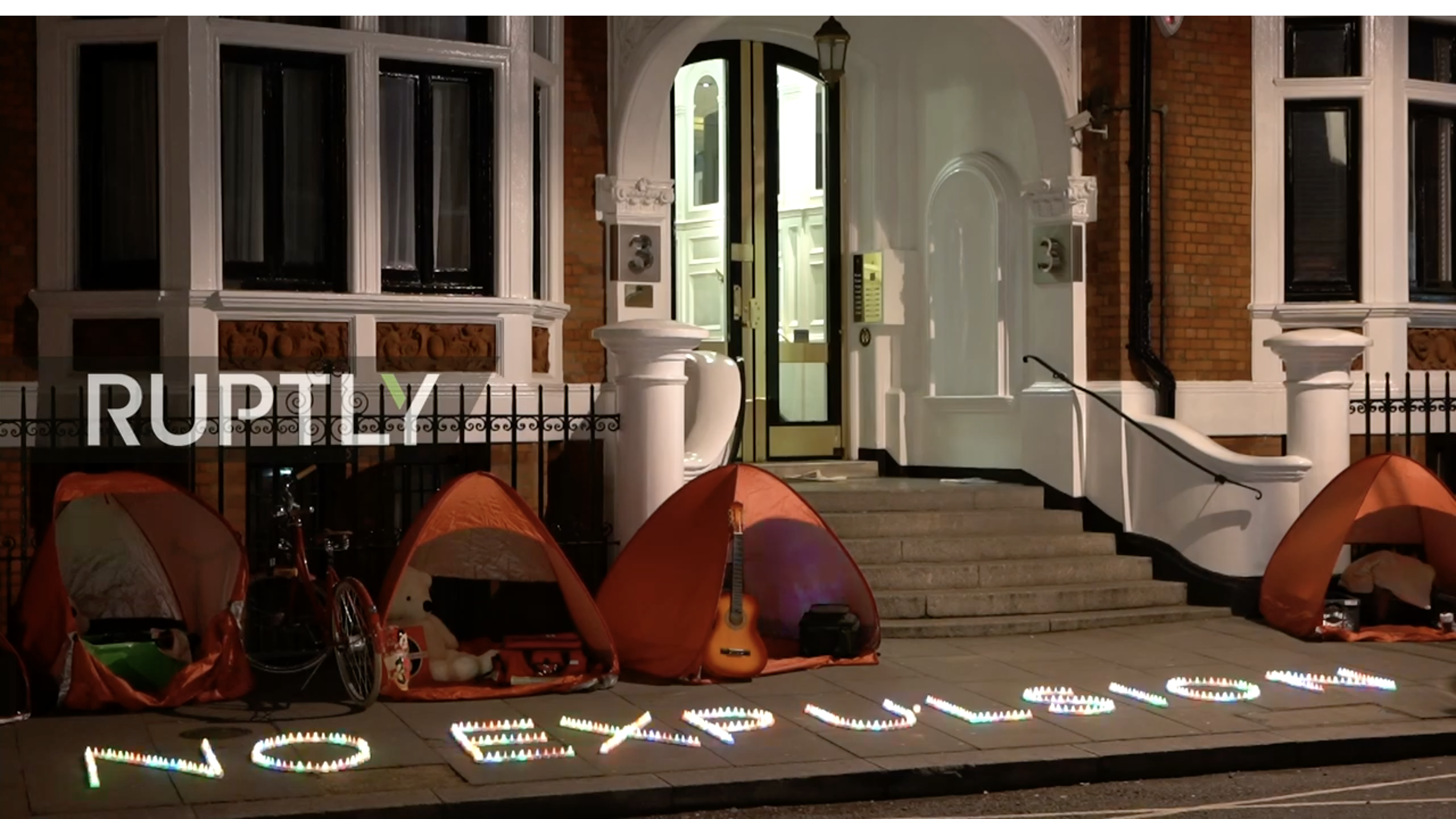 Scene outside London embassy at 4:30 am Friday morning. (Ruptly/YouTube screenshot)

WikiLeaks warned Thursday that its founder “will be expelled within ‘hours to days'” from Ecuador’s London embassy and that Ecuador has an agreement with Britain to have him arrested.

President Lenin Moreno will use the pretext of a scandal engulfing his presidency to oust Assange, a “high level source” in the Ecuador government told WikiLeaks.

BREAKING: A high level source within the Ecuadorian state has told @WikiLeaks that Julian Assange will be expelled within "hours to days" using the #INAPapers offshore scandal as a pretext–and that it already has an agreement with the UK for his arrest.https://t.co/adnJph79wq

Moreno has accused WikiLeaks of leaking documents allegedly implicating him and his family in a corruption scheme with a Panamanian investment firm, INA Investments Corp.  WikiLeaks has denied being behind the leaks and no documents related to the scandal appear on its website.

Moreno said the alleged leak by WikiLeaks is a breach in a “protocol” with Assange that allows him to remain in the London embassy in exchange for his public silence on all political matters. Assange has never agreed to the protocol.  His social media accounts were shut down by Ecuador in March 2018.

Because of this so-called “breach,” Assange will be made to leave the embassy and would be arrested by British authorities. Assange has been a refugee inside the embassy since 2012, fearing that if he were to be arrested the UK would extradite him to the United States to stand trail for publishing classified information.

Last week Assange engaged in a shouting match with Ecuador’s ambassador inside the embassy. The move to expel Assange has been building for months. Last week Defend Assange, a publication of WikiLeaks-linked Courage Foundation, reported:

“On 28 March, Communications Minister Andrés Michelena told CNN Español that the INApapers were part of a plot [by] Julian Assange, Venezuelan President Maduro and former Ecuadorian President Correa to bring down Moreno’s government. [Michelena] added, ‘You have to understand how these people are connected, Mr. Assange is the Troll Center, the hacker for former President Correa, [Assange] handles the technological and social media side.’

That same day, the national assembly, in which Moreno’s party and other right parties command a majority, passed a resolution inviting the Foreign Ministry to take action against Assange’s asylum on the basis of the INApapers leak “in the national interest” if it considers it pertinent to do so.”

Supporters of WikiLeaks and Assange rapidly called for an increased presence at the Ecuadorian Embassy, located at Number 3, Hans Crescent in London.

Julian about to be expelled from Embassy into hands of UK (US)!

A live stream of what is happening outside the embassy can be found here:

Award-winning journalist and filmmaker John Pilger wrote via Twitter: “WikiLeaks reports that Julian Assange is on the verge of being expelled from the Ecuadorean Embassy in London. Please fill the street outside the embassy and protect him, and show solidarity with a courageous man, whose struggle ought to touch us all.”  A marathon online vigil for Assange will begin Friday at 4 pm EST, to be webcast by Consortium News.

Christine Assange, whose Twitter account has twice been restricted in the past two weeks, is expected on the vigil.

Elizabeth Vos contributed to this story.

59 comments for “BREAKING: Assange ‘Will Be’ Arrested in ‘Hours to Days,’ WikiLeaks Says”