Criticizing Israel is considered bad form, writes Daniel Lazare, but keeping mum about Saudi crimes is fine as long as the donations continue to flow.

In a week when the GOP flaunted its legislative attacks on anti-Semitism at the annual meeting of the American Israel Public Affairs Committee, and brought AIPAC loyalties into the 2020 campaign, let’s remember that plenty of people in the liberal establishment play the same two-faced game. While pretending to oppose bigotry, they are in bed with the most anti-Semitic governments on Earth.

Tony Blair, British prime minister from 1997 to 2007, is a prime example. Blair may be gone, but his Labour Party followers are leading the charge against such targets as the party’s current leader, Jeremy Corbyn, and Afro-Jewish socialist Jackie Walker.  Margaret Hodge, a Labour member of parliament who reportedly called Corbyn “a fucking anti-Semite and a racist” in a closed-door meeting, was an early Blair backer who supported his decision to invade Iraq in 2003.  Luciana Berger, who said last year that “anti-Semitism is very real and alive in the Labour Party,” is another Blairite with a hawkish foreign-policy record. Labour’s Deputy Leader Tom Watson, who has defended Berger, also backed the Iraq invasion.  Ditto Ann Coffey, who has assailed the “Corbyn culture of antisemitism” and began her political ascent as Blair’s parliamentary private secretary, a kind of junior whip, in the late 1990s. 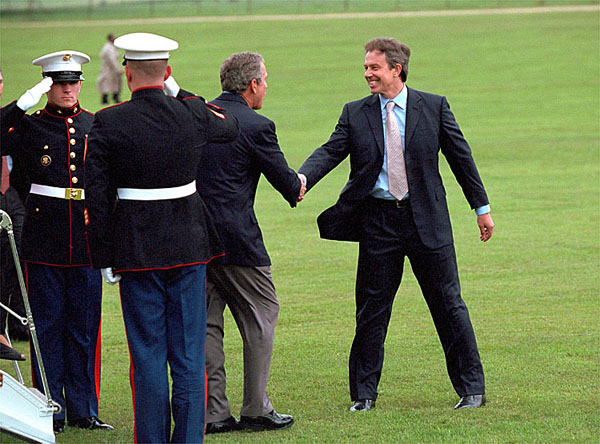 All want voters to think Labour is now riddled with anti-Semitism and that criticism of Israel should be circumspect at best lest it open the door to western society’s oldest hatred.  Evidently, they miss the Blair days, when Labor was high-minded and decent.

But these Blairites are silent on their hero’s partnership with PetroSaudi. This company, which described itself as a “vehicle of the Saudi royal family,” put Blair’s now-defunct firm, Tony Blair Associates, on a $65,000-a-month retainer to help it drum up business in China.  Although Tony Blair Associates closed amid controversy, the connections apparently lived on. Last September, The Financial Times reported that Blair’s personal foundation, the Tony Blair Institute for Global Change, has benefited from Saudi largesse in the form of a £9 million donation – about $12 million – from the Saudi Research & Marketing Group, a company controlled by Prince Badr bin Abdullah, the kingdom’s minister of culture.

Thus, Blair’s new “global change institute” — on a self-proclaimed mission to “make globalization work for the many, not the few” — is beholden to a kingdom that is a byword for torture, autocracy and extreme religious intolerance. Saudi Arabia bans all faiths other than Islam and persecutes Muslims who fail to adhere to the official brand of Sunni fundamentalism known as Wahhabism (after an 18th-century mullah named Muhammad ibn Abd al-Wahhab).  Saudi police in 2011 arrested 35 Ethiopian Christians, mainly women, for the “crime” of participating in an underground prayer meeting. Shi‘ites in the kingdom’s oil-rich Eastern Province suffer “pervasive discrimination” according to Human Rights Watch.

Saudi textbooks distributed widely throughout the Dar al Islam teach that judgment day “will not come until the Muslims fight the Jews, and the Muslims will kill them,” according to a U.S. government study. One 10th-grade text declares: “Feelings of arrogance and superiority inhabit the Jews.  They claim they are the chosen people even though God himself has denied that, humiliated them, misled them, and made them into swine and apes.”

ISIS used Saudi textbooks in schools it controlled in Syria and Iraq back when it still had a caliphate, while Saudi texts have cropped up in weekend school programs in the United Kingdom and Belgium.  Training manuals in Brussels’s Grand Mosque — until recently Saudi-funded and controlled — teach that Jews are “traitors, infidels, and impostors … obscene and vulgar … cruel and insensible … greedy, avid, and avaricious” and “use violence, power, and terror to control the world.”

This goes back centuries.  In 1810, a French explorer named Louis Alexandre Olivier de Corncez wrote that Wahhabists display “the cruelest intolerance towards Christians and Jews,” as Simon Ross Valentine recounts in his book, “Force and Fanaticism: Wahhabism in Saudi Arabia and Beyond.”

Robert Vitalis, in his “America’s Kingdom: Mythmaking on the Saudi Oil Frontier,” gives the more recent example of an American Airline executive describing a meeting, in the late 1940s, with Deputy Foreign Minister Yusuf Yassin: “As for Jews, a Jew is a Jew in the eyes of the Saudis, regardless of what passport he may be carrying.  As Yusuf explained to us in no uncertain terms, Saudi Arabia is a holy Moslem country and no Jew is going to be allowed to pass through it and to contaminate it.  They realize such an attitude is tough on international carriers but they just don’t care – they don’t want any Jews setting foot on Saudi Arabian soil, ‘period!’”

This is the history and present-day culture with which Tony Blair aligns. 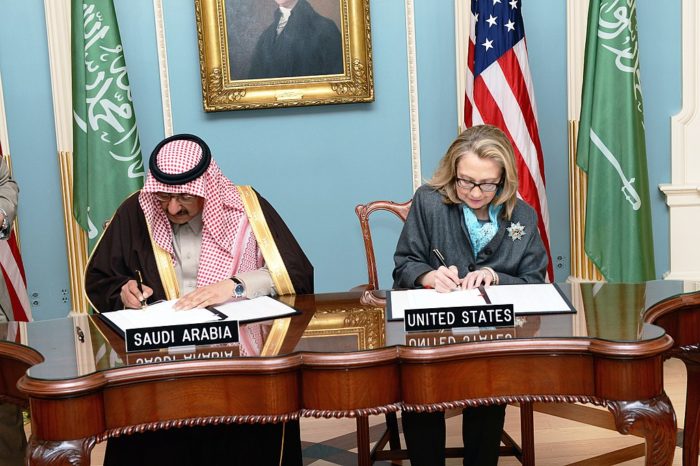 The same goes for Clintonites on the other side of the pond.  The three Democrats who led the charge last month against U.S. Rep. Ilhan Omar for her alleged anti-Semitism were Representatives Nita Lowey, Eliot Engel and Jerrold Nadler, all from New York and all early backers of fellow New Yorker Hillary Clinton’s 2016 presidential bid.  The implicit assumption in their attack was that things were better when centrist Democrats held sway and rambunctious upstarts like Omar were still stuck in Minneapolis.

What goes unmentioned is that Hillary and her former-president husband have partnered with the Saudis in a way that Blair can only envy.  Since 1997, the Clinton Foundation has raked in between $10 million and $25 million from the Saudi government, according to the foundation’s website (which only gives ranges of contribution) while individual Saudi businessmen have donated between $8 million and $25 million.  Five other Persian Gulf petro-monarchies have donated between $9 million and $30 million. And the Saudi royal family has given $10 million to Bill Clinton’s presidential library in Little Rock, Arkansas. All told, it’s a dazzling sum that, had Hillary become president, would undoubtedly have served to steer Mideast policy in an even more pro-Saudi direction.  When Saudi King Abdullah died in early 2015, Bill and Hillary praised his peacemaking activities and “personal friendship and kindness toward our family.” 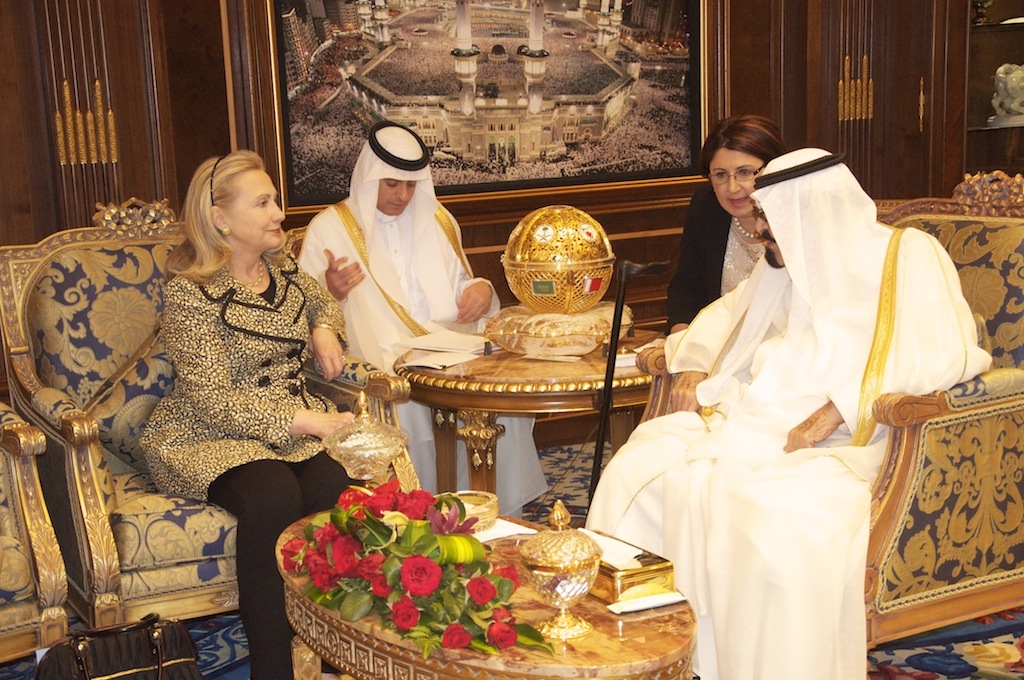 But they didn’t mention less-savory aspects of his reign. These include not only bigoted textbooks but terrorism.  As Hillary confided a year earlier in a 2014 email, “the governments of Qatar and Saudi Arabia … are providing clandestine financial support to ISIL and other radical Sunni groups in the region.”

Other atrocities, also unmentioned, include South Asian servants sentenced to death on flimsy, trumped-up charges (examples here and here), a gay man sentenced to 450 lashes in 2014 for using Twitter to arrange dates, a young woman sentenced to 200 lashes for the crime of being gang raped, and the persecution of liberal blogger Raif Badawi, who has been in a Saudi prison since 2012 for daring to challenge Wahhabist bigotry.

All took place under Abdullah’s reign. Just as we’re supposed to turn a blind eye to Israel’s sins, we’re expected to keep mum about Saudi crimes — as long as the donations continue to flow, that is.

The Saudis are not alone in spreading anti-Semitism.  The U.S. has failed to criticize President Petro Poroshenko for permitting neo-Nazis militias to run riot in the Ukraine, attacking feminists, gays, and Roma and holding torchlight parades in honor of World War II collaborator Stepan Bandera in which they chant “Jews out.”  Washington is silent about the Baltics, where demonstrations in honor of Hitler’s SS units are now an annual occurrence.  Last April, 57 lawmakers signed a letter by California Democrat Ro Khanna calling on the Ukraine to “unequivocally reject Holocaust distortion and the honoring of Nazi collaborators.”  Lowey and Engel were conspicuously absent among the signatories. Apparently, Omar’s  tweet about “the Benjamins baby” is more offensive than thousands of fascists marching through the streets of Kiev.

And then there’s Israel. It might be expected to be in the forefront of combatting anti-Semitism. The opposite is the case. Israeli Prime Minister Benjamin Netanyahu is cultivating the support of hard-right nationalists in Central Europe while hailing Hungarian strongman Viktor Orban as a “true friend of Israel” even as Orban wages a classic anti-Semitic campaign against Jewish philanthropist George Soros.  Netanyahu’s government has sold weapons to Ukraine’s neo-Nazi Azov militia and has whitewashed the Polish government’s efforts to “disappear” the Polish role in the Holocaust, thereby earning an unprecedented rebuke from Israel’s own Yad Vashem Holocaust museum.  In America, his chief allies include evangelical Christians who believe that, come the apocalypse, Jesus will institute a divine kingdom which Jews must either submit to or be killed.

While allying with Jewish neo-Nazis at home, Netanyahu draws ever closer to rightwing nationalists abroad.  Even GeorgeOrwell would have been taken aback by the spectacle of Zionists embracing anti-Jewish bigots while smearing leftists, many of them Jews, as anti-Semites for standing up for Palestinian rights.  War is peace, freedom is slavery, and anti-racists are racist whenever bigots like Netanyahu say so.  While leveling phony charges of anti-Semitism, Blairites and Clintonites are helping to spread the real article farther and farther afield.

← How the Israel Lobby Got its Start
ANGRY ARAB: Memories and Omissions of the Iraq Wars →

34 comments for “Anti-Semitism and Double Standards”