The Trump administration’s foreign policy may be easily deconstructed as a crossover between The Sopranos and late-night comedy, writes Pepe Escobar.

As right populism learns to use algorithms, artificial intelligence (AI) and media convergence, the Empire of Chaos, in parallel, is unleashing all-out hybrid and semiotic war.

Dick Cheney’s Global War on Terror (GWOT) is back, metastasized as a hybrid mongrel.

But GWOT would not be GWOT without a Wild West scarecrow. Enter Hamza bin Laden, son of Osama. On the same day the State Department announced a $1 million bounty on his head, the so- called “UN Security Council IS and Al-Qaeda Sanctions Committee” declared Hamza the next al-Qaeda leader.

Since January 2017, Hamza has been a Specially Designated Global Terrorist by the State Department – on par with his deceased Dad, back in the early 2000s. The Beltway intel community “believes” Hamza resides “in the Afghanistan-Pakistan region.”

Remember these are the same people who “believed” former Taliban leader Mullah Omar resided in Quetta, Baluchistan, when in fact he was safely ensconced only a few miles away from a massive U.S. military base in Zabul, Afghanistan.

Considering that Jabhat al-Nusra, or al-Qaeda in Syria, for all practical purposes, was defined as no more than “moderate rebels” by the Beltway intel community, it’s safe to infer that new scarecrow Hamza is also a “moderate”. And yet he’s more dangerous than vanished fake Caliph Abu Baqr al-Baghdadi. Talk about a masterful example of culture jamming.

Show Me The Big Picture 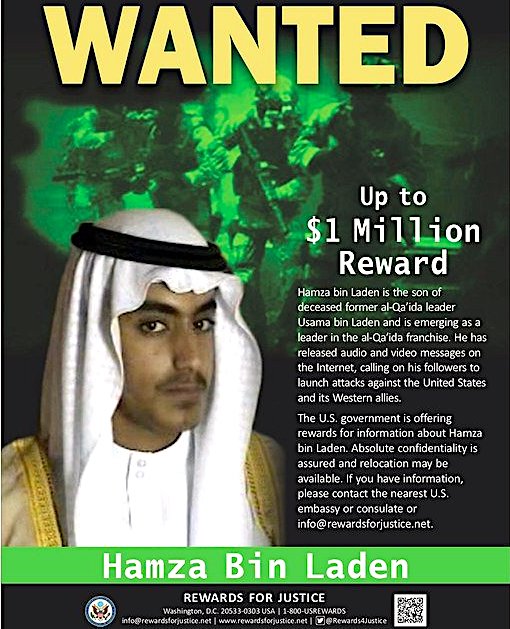 A hefty case can be made that the Empire of Chaos currently has no allies; it’s essentially surrounded by an assortment of vassals, puppets and comprador 5thcolumnist elites professing varied degrees of – sometimes reluctant – obedience.

The Trump administration’s foreign policy may be easily deconstructed as a crossover between The Sopranos and late-night comedy – as in the whole episode of designating State Department/CIA regime change, lab experiment Random Dude as President of Venezuela. Legendary cultural critic Walter Benjamin would have called it “the aestheticization of politics,” (turning politics into art), as he did about the Nazis, but this time it’s the Looney Tunes version.

To add to the conceptual confusion, despite countless “an offer you can’t refuse” antics unleashed by psychopaths of the John Bolton and Mike Pompeo variety, there’s this startling nugget. Former Iranian diplomat Amir Moussavi has revealed that Trump himself demanded to visit Tehran, and was duly rebuffed. “Two European states, two Arab countries and one Southeast Asian state” were mediating a series of messages relayed by Trump and his son-in-law Jared “of Arabia” Kushner, according to Moussavi.

Is there a method to this madness? An attempt at a Grand Narrative would go something like this: ISIS/Daesh may have been sidelined – for now; they are not useful anymore, so the U.S. must fight the larger “evil”: Tehran. GWOT has been revived, and though Hamza bin Laden has been designated the new Caliph, GWOT has shifted to Iran.

When we mix this with the recent India-Pakistan scuffle, a wider message emerges. There was absolutely no interest by Prime Minister Imran Kahn, the Pakistani Army and the Pakistani intelligence, ISI, to launch an attack on India in Kashmir. Pakistan was about to run out of money and about to be bolstered by the U.S., via Saudi Arabia with $20 billion and an IMF loan.

At the same time, there were two almost simultaneous terrorist attacks launched from Pakistan – against Iran and against India in mid-February. There’s no smoking gun yet, but these attacks may have been manipulated by a foreign intelligence agency. The Cui Bono riddle is which state would profit immensely from a war between Pakistan and Iran and/or a war between Pakistan and India.

The bottom line: hiding in the shadow of plausible deniability – according to which what we understand as reality is nothing but pure perception – the Empire of Chaos will resort to the chaos of no-holds-barred hybrid war to avoid “losing” the Eurasian heartland.

Show Me How Many Hybrid Plans You Got 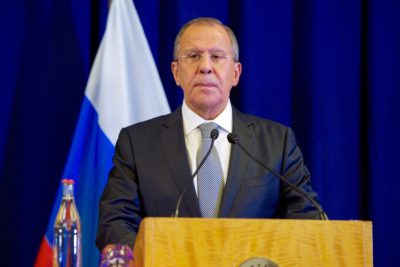 Meeting with Chinese Foreign Minister Wang Yi and Indian Foreign Minister Sushma Swaraj at a crucial RIC (part of BRICS) summit in China,Lavrov said, “Russia keeps a close eye on brazen US attempts to create an artificial pretext for a military intervention in Venezuela… The actual implementation of these threats is pulling in military equipment and training [US] Special Forces.”

Lavrov explained how Washington was engaged in acquiring mortars and portable air defense systems “in an East European country, and mov(ing) them closer to Venezuela by an airline of a regime that is… rather absolutely obedient to Washington in the post-Soviet space.”

The U.S. attempt at regime change in Venezuela has been so far unsuccessful in several ways. Plan A – a classic color revolution -has miserably failed, in part because of a lack of decent local intelligence. Plan B was a soft version of humanitarian imperialism, with a resuscitation of the nefarious, Libya-tested responsibility to protect (R2P); it also failed, especially when the American tale that the Venezuelan government burnt humanitarian aid trucks at the border with Colombia was a lie, exposed by The New York Times, no less.

Plan C was a classic Hybrid War technique: a cyberattack, replete with a revival of Nitro Zeus, which shut down 80 percent of Venezuela’s electricity.

That plan had already been exposed by WikiLeaks, via a 2010 memo by a U.S.-funded, Belgrade-based color revolution scam that helped train self-proclaimed “President” Random Dude, when he was just known as Juan Guaidó. The leaked memo said that attacking the Venezuelan power grid would be a “watershed event” that “would likely have the impact of galvanizing public unrest in a way that no opposition group could ever hope to generate.”

But even that was not enough.

That leaves Plan D – which is essentially to try to starve the Venezuelan population to death via viciously lethal additional sanctions. Sanctioned Syria and sanctioned Iran didn’t collapse. Even boasting myriad comprador elites aggregated in the Lima group, exceptionalists may have to come to grips with the fact that deploying the Monroe doctrine essentially to contain China’s influence in the young 21stcentury is no “cakewalk.”

Show Me the Way to the Next War Game

So where do all these myriad weaponizations of chaos theory leave us? Nowhere, if they don’t follow the money. Local comprador elites must be lavishly rewarded, otherwise you’re stuck in hybrid swamp territory. That was the case in Brazil – and that’s why the most sophisticated hybrid war case history so far has been a success.

In 2013, Edward Snowden and WikiLeaks revealed how the NSA was spying on Brazilian energy giant Petrobras and the Dilma Rousseff government beginning in 2010. Afterwards, a complex, rolling judicial-business-political-financial-media coup ended up reaching its two main objectives; in 2016, with the impeachment of Rousseff, and in 2018, with Lula thrown in jail.

Now comes arguably the juiciest piece of the puzzle. Petrobras was supposed to pay $853 million to the U.S. Department of Justice for not going to trial for crimes it was being accused of in America. But then a dodgy deal was struck according to which the fine will be transferred to a Brazilian fund as long as Petrobras commits to relay confidential information about its businesses to the United States government.

Hybrid war against BRICS member Brazil worked like a charm, but trying it against nuclear superpower Russia is a completely different ball game. U.S. analysts, in another case of culture jamming, even accuse Russia itself of deploying hybrid war – a concept actually invented in the U.S. within a counter-terrorism context; applied during the occupation of Iraq and later metastasized across the color revolution spectrum; and featuring, among others, in an article co-authored by former Pentagon head James “Mad Dog” Mattis in 2005 when he was a mere lieutenant general.

At a recent conference about Russia’s military strategy, Chief of General Staff Gen. Valery Gerasimov stressed that the Russian armed forces must increase both their “classic” and “asymmetrical” potential. In the U.S. this is interpreted as subversion/propaganda hybrid war techniques as applied in Ukraine and in the largely debunked Russia-gate. Instead, Russian strategists refer to these techniques as “complex approach” and “new generation war”.

Santa Monica’s RAND Corporation still sticks to good ol’ hot war scenarios. They have been holding “Red on Blue” war games simulations since 1952 – modeling how the proverbial “existential threats” could use asymmetric strategies. The latest Red on Blue was not exactly swell. RAND analyst David Ochmanek famously said that with Blue representing the current U.S. military potential and Red representing Russia-China in a conventional war, “Blue gets its ass handed to it.”

None of this will convince Empire of Chaos functionary Gen. Joseph Dunford, chairman of the Joint Chiefs of Staff, who recently told a Senate Armed Services Committee that the Pentagon will continue to refuse a “no first use” nuclear strategy. Aspiring Dr. Strangeloves actually believe the U.S. can start a nuclear war and get away with it.

Talk about the Age of Hybrid Stupidity going out with a bang.

← Rendition Plane, Increased Police Presence Raise Fears for Assange
Consortium News’ Record on Russia-gate—A Series of Articles on How CN Covered the ‘Scandal’: No. 1—‘The Sleazy Origins of Russia-gate’ →