Ann Wright reports on the launch earlier this month, in D.C. and New York, of the worldwide “Korea Peace Now” campaign.

While U.S.-North Korean contact is stalled, relations between North Korea and South Korea continue to increase.

One sign of that came earlier this month when a consortium of four international women’s groups launched a worldwide campaign for peace on the Korean peninsula, “Korea Peace Now — Women Mobilizing to End the War,” during the United Nations’ Commission on the Status of Women, held during the week of March 10.

With launch events in Washington, D.C., and New York City, representatives of Women Cross DMZ, Nobel Women’s Initiative, Women’s International League for Peace and Freedom and the Korean Women’s Movement for Peace hosted three female parliamentarians from the South Korean National Assembly.  These legislators spoke with many U.S. representatives about supporting South Korean initiatives for peace on the Korean peninsula. They also met with members of the public, academics and think tankers at the Council on Foreign Relations. 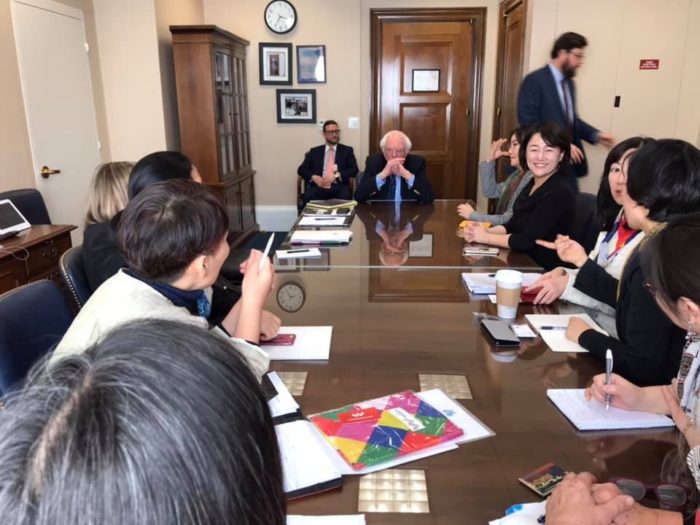 Kwon Mi-Hyuk, the leader of the South Korean National Assembly, said that she has been perplexed by how little people in the U.S. — politicians as well as citizens — know about the important developments between North and South Korea in the past year, since the first summit between South Korean President Moon Jae-In and North Korean leader Kim Jung Un on April 27, 2018, in the Joint Security Area of the demilitarized zone.  She added that 80 million Koreans on the Korean peninsula, in both the North and South, are depending on the cooperation of the United States to help finally end the 70-year-old hostilities.

Only Reason to Meet

During the same week, the U.S.-based Korea Peace Network held its annual Korea Advocacy Days on March 13-14 in Washington, D.C.  Speakers at the conference from all political alignments consistently agreed that meetings now underway — both the high-profile North-South and U.S.- North Korea contacts as well as those rumbling along between the Washington and Seoul— must produce a peace agreement. 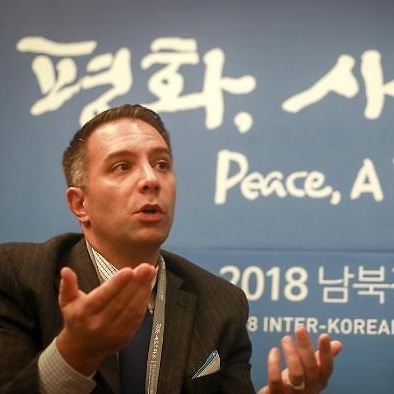 Doug Bandow of the libertarian CATO Institute and Harry Kazianis, senior fellow at the Center for National Interest, both said military operations on the Korean peninsula have no place in today’s thinking about national security. Kazianis said that the Hanoi summit in late February between President Donald Trump and Chairman Kim Jong Un, which ended abruptly, was not a failure, but one of the to-be-expected slowdowns in negotiations. He noted that statements of “fire and fury” have not erupted from the White House since the Hanoi summit, nor has there been a resumption of North Korea nuclear or missile testing.  North Korean ICBM missile tests, Kazianis said, were the trigger point for the Trump administration. With no restart of those tests by North Korea, the White House is lower-keyed than it was in 2017.  Kazianis added that North Korea, with a population of 30 million and an economy the size of that of Vermont, poses no economic threat to the U.S.

After the Hanoi meeting, the Trump administration said North Korea demanded that U.S. lift all sanctions. The North Korean side responded by saying it had asked only for the lifting of some, specific sanctions — not all — as a confidence building measure after it had suspended nuclear weapons and ballistic missile testing.

In 2018, North and South Korean government officials met 38 times in addition to the three summits between South Korean President Moon Jae-In and North Korean Chairman Kim Jung Un. These contacts occurred while sentry towers in the DMZ were being dismantled, while part of the DMZ was getting demined and while liaison offices between North and South were opening. Train tracks linking the two Koreas have been closely inspected. By opening a way through North Korea and China and Central Asia they are expected, ultimately, to link South Korea with Europe. 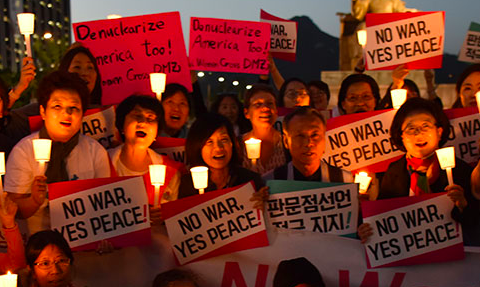 Kim Young Soon of the Korea Women’s Associations United said three meetings between civil society groups in South Korea and North Korea occurred in 2018, all aimed at reconciliation.  In a recent poll, 95 percent of young people in South Korea favor of dialogue with North Korea.

Nobel Peace Laureate Jodie Williams, chair of the Nobel Women’s Initiative, noted that the United States is one of the few countries that refused to sign the Landmine Treaty, claiming that landmines are needed to protect U.S. and South Korean military in the DMZ. 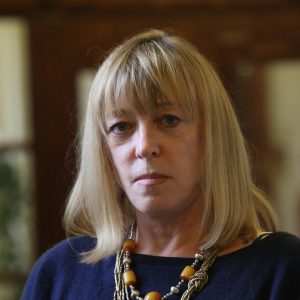 Williams, who visited the DMZ many times in the 1990s in her work to ban landmines, returned there in December 2018 while South Korean soldiers were dismantling sentry posts and removing landmines as a part of the North-South cooperative agreements.  Williams said that one soldier told her, “I went to the DMZ with hate in my heart, but the more we interacted with North Korea soldiers, the hate went away.  I thought of North Korean soldiers as my enemy, but now that I have met them and talked with them, they are not my enemy, they are my friends.  We as Korean brothers just want peace, not war.”

On the theme of women, peace and security, Williams added, “When only men lead peace processes, the main issues that are addressed are guns and nukes, neglecting root causes of conflict. Guns and nukes are important to address, but this is why we need women at the center of peace processes — to discuss the impact of wars on women and children.”

U.S. Rep. Ro Khanna spoke to the spoke to the Korean Advocacy group about House Resolution 152, which asks Trump to declare an end to war with North Korea, the longest state of war in U.S. history.  Member organizations of the Korea Peace Network will be asking their members to press their members of Congress to sign onto the resolution.  The resolution currently has 22 co-sponsors.

“We Koreans, in both the North and the South, have deep scars from the World War II war and the division of our country after World War II,” said Mimi Han of the Young Women’s Christian Association and the Korean Women’s Movement for Peace. “Korea had nothing to do with the war. We were occupied by Japan for decades before the war and yet our country was divided, not Japan.   My mother was born in Pyongyang. Seventy years later, trauma is still living in us. We want peace on the Korean peninsula-finally.”

Fifteen of the 17 countries that comprised the “UN Command” during the Korean War have normalized relations North Korea and have embassies there now. The United States and France are the only exceptions.

The unification communique signed in 2018 by Moon, the president of the South, and Kim, the leader of the North, refers to a moment of “great historic transformation.” It goes on to itemize specific steps for confidence building and underscores a vision of peace, trilateral meetings with the U.S., the reunification of families, joint economic-development and regular contacts between the leaders of the two countries.

This all goes far beyond general concepts Trump was willing to sign in the communique following his first meeting with North Korea leader Kim.  Their second abruptly ended without a communique and cross talk.

Several speakers at the Korean Advocacy Days conference noted that the influence of war hawk John Bolton, Trump’s national security advisor, dramatically changed the dynamic of the summit in Hanoi.  As long as Bolton and his long-standing group of regime-change allies in the Contract for a New American Century remain in the White House, Trump’s goal of reaching an agreement with North Korea will be stymied.

18 comments for “Impatient for Peace on the Korean Peninsula”