We are at a new stage of the fight to realize Palestinian rights and free both Palestinians and Jews from the consequences of Zionist racism. There was a time when very few in the West understood the racist nature of the Israeli state. For a long time, the Zionists controlled the public relations message and most people took as fact the fictional account of Israel’s founding—such as the one given in Leon Uris’s book “Exodus.”

After the 1967 war, and Israel’s decision to keep even more conquered Palestinian territory, things began to change. Of course, Israel had always been a racist place designed for one group alone. But now the contradictions created by post-war occupation made, and continue to make, that fact harder to hide, and the mythical picture of Israel as a grand democratic experiment has eroded. Increasingly the real, illiberal Israel has become apparent to Western audiences, and particularly to an increasing number of Jews. As a result, Israel has largely lost the public relations battle at the popular level of Western society. 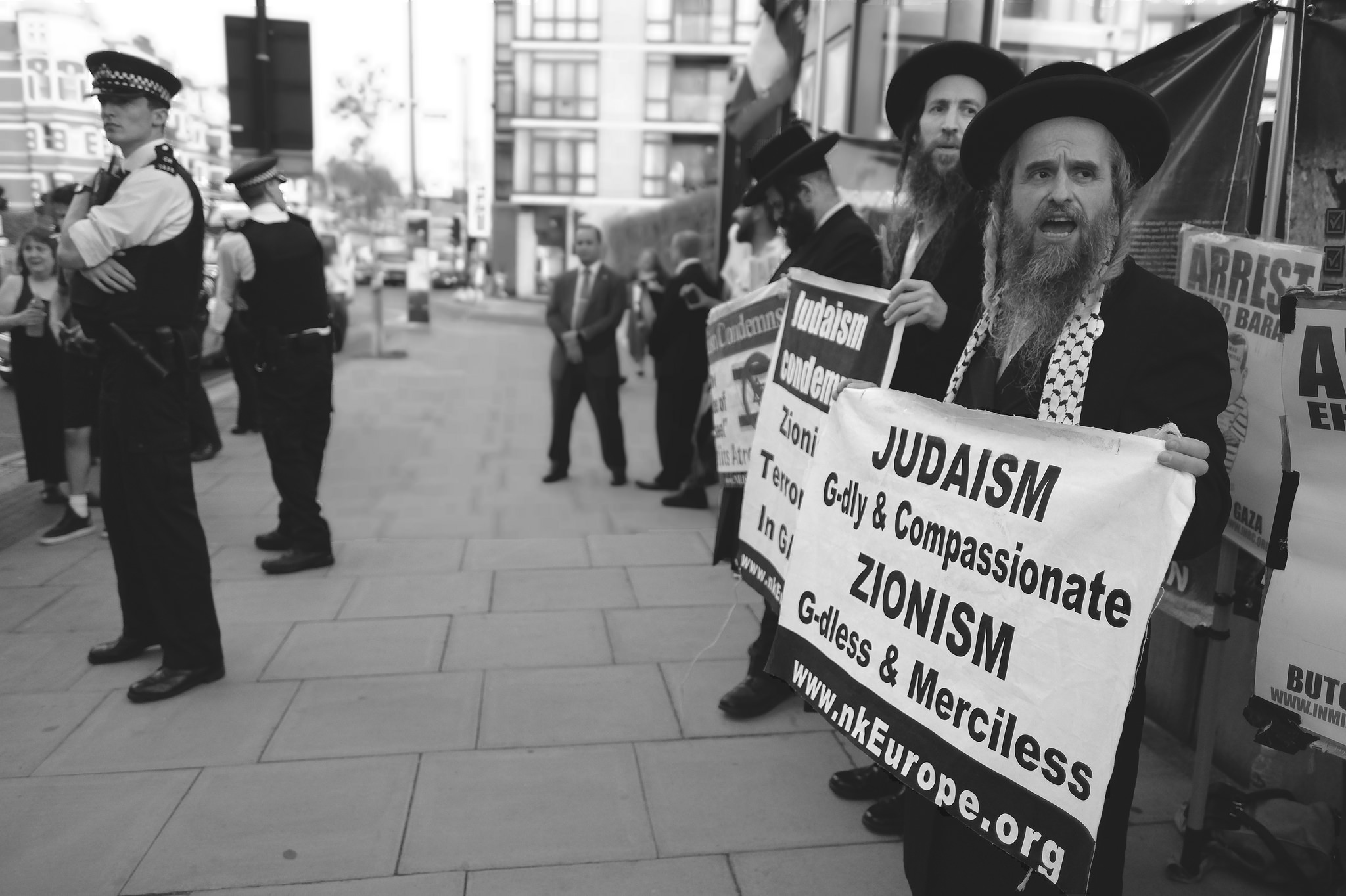 However, the winning of this battle is not to be equated with the winning of the fight mentioned above. The Zionists are still able to maintain Western financial and military support of Israel at obscene levels despite Israel’s revealed apartheid nature.

To combat the popular criticism to which Israel is now subject, the Zionists have shifted tactics. They have abandoned popular debate and now use their influence with the West’s ruling elites to simply criminalize any rhetoric that points out the real discriminatory nature of the Zionist state. The gambit here is to have such criticism legally equated with anti-Semitism.

Indeed, there has been a rise in anti-Semitic incidents in France over the last couple of decades. Significantly, Macron did not attempt to analyze why this was happening. For instance, while asserting that anti-Semites “are not worthy of the Republic,” he did not take note of the historical fact that anti-Semitism has been a major force in France for hundreds of years and through multiple French forms of government. Historically it has ebbed and flowed.

We can trace this trend back to medieval France and the absolutist Catholic culture of that time. While ultimately revolutionary 18th century France (a markedly anti-clerical period) was the first European country to emancipate Jews, anti-Semitism never disappeared. It again became particularly virulent in France during the Dreyfus Affair in the 1890s and under the Nazi-allied Vichy regime in the 1940s. Thus, the presence in today’s France of traditional anti-Semites, those who are prejudiced against Jews qua Jews, should come as no surprise.

The latest outbreak of hostility involving Jews in France is the product of modern historical factors that more than one Paris government has failed to confront. This failure has increased resentment against some French Jews—particularly those who are Zionists. Yet it is important to note that much of this sort of emotion is not a function of anti-Semitism.

For instance, the Israeli newspaper Haaretz has noted that “anti-Semitism” is now “often surfacing among radicalized Muslims” in France. While we can take issue with the notion of “radicalized” Muslims and the description of their sentiments as “anti-Semitism,” we will address the assertion of hostility and ask why should this be so.

It may be because France has treated its citizens of Arab origin very poorly while simultaneously and publicly supporting Israel, which, of course, treats its own Arab population even worse.

France has a long imperial and colonial history in the Arab world and fought a bitter, relatively recent war to hold onto Algeria. When, in 1962, it finally abandoned that effort, there were 150,000 Algerian Arabs who had fought with the French. They were disarmed and then abandoned to their fate—prevented from emigrating to France by the government of that day. However, “through the kindness of individual French commanders … several thousand were illegally smuggled to France where on arrival they were confined to primitive rural camps.” 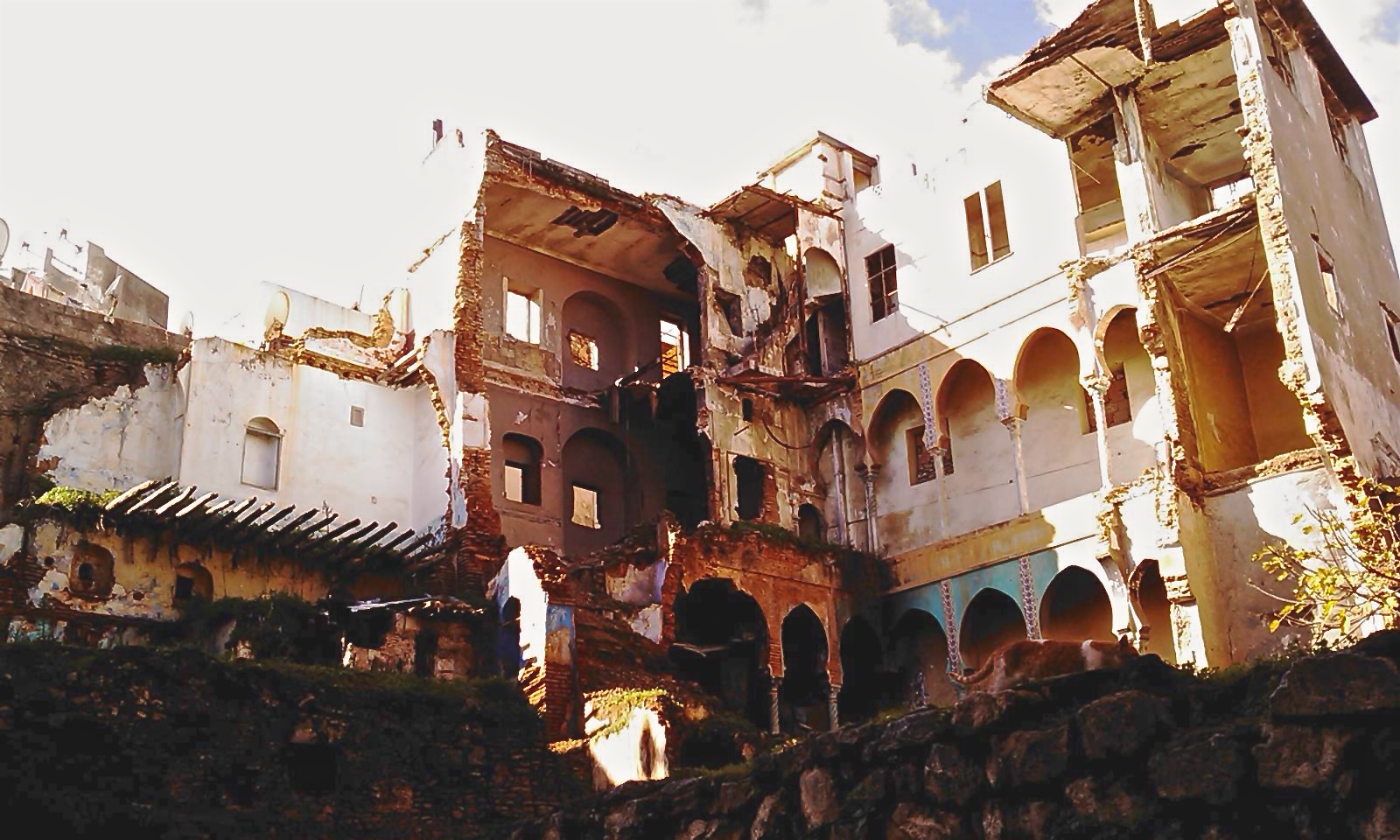 When they were finally let out of the camps, they continued to be segregated and discriminated against. This prevailing prejudice was maintained in the treatment of other African and Middle Eastern immigrants who subsequently made their way to France. One ongoing sign of this can be found in the culture war against Muslims living in the country. Muslim dress, and even halal food, have been deemed dangerous to traditional French culture. The anger of the French Arab population stems from this continuous discrimination, but why would some of it be directed against a portion of France’s Jewish citizens?

It may well be because more and more French Arabs, angry over their discriminatory treatment by French society, increasingly identify with Palestinians, who are also discriminated against by Israeli society. And, they are encouraged in this identification by the fact that, except for a brief period under the leadership of Charles De Gaulle, France has been a strong supporter of Israel.

This is a tradition that Macron accentuated in his address to the CRIF. He told his audience that he will make anti-Zionism the equivalent of anti-Semitism under French law. Macron justifies this move by claiming that “anti-Zionism is one of the modern forms of anti-Semitism.”

What Macron is saying is that in France you cannot speak out against the ideological basis for Israeli racism. If you do so, you yourself will be judged a racist and a criminal. Just how unreasonable this is is elegantly explained in an “open letter” to Macron by the Israeli historian Shlomo Sand, posted on Feb. 8 in the publication Jacobin. 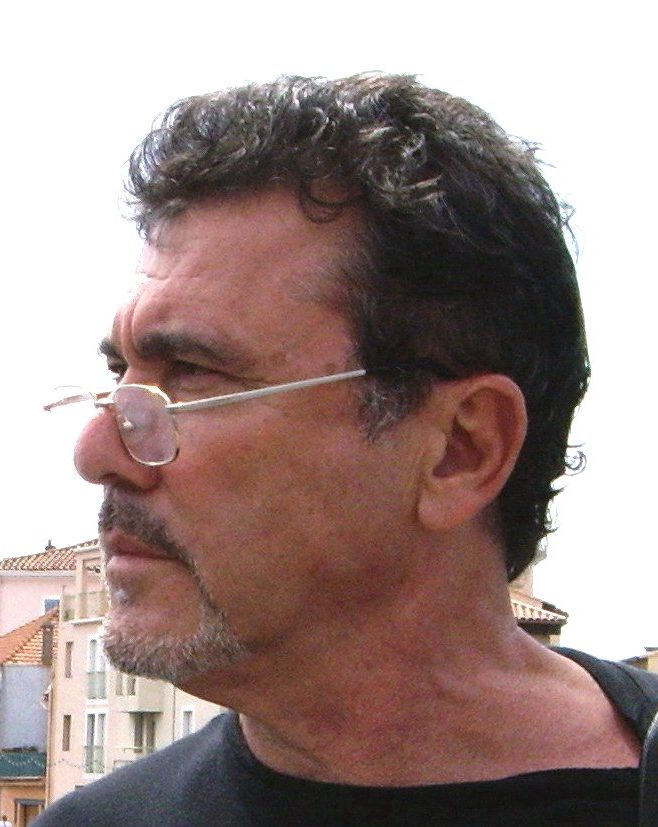 In his letter Sand points out that Zionist Israel is not a republic on the Western model, and certainly not a democracy. It is a “Jewish communalist state.” That is why Sand cannot be a Zionist, because “I am a citizen who desires that the state he lives in should be an Israeli republic, and not a Jewish-communalist state. … I do not want to live in a state that, according to its own self-definition, makes me a privileged class of citizen.”

Sand goes on to explain that “the Israeli Interior Ministry counts 75 percent of the country’s citizens as Jewish, 21 percent as Arab Muslims and Christians, and 4 percent as ‘others’ (sic). Yet according to the spirit of its laws, Israel does not belong to Israelis as a whole, whereas it does belong even to all those Jews worldwide who have no intention of coming to live there.”

Under these circumstances, one cannot be someone who takes republican and democratic principles seriously and still be a Zionist. So Sand has made his choice: he wants to replace Zionist Israel with “an Israeli republic.” Then he asks,

“Mr. President, do you think that that makes me an antisemite?”

Apparently Macron is oblivious to the logic of Shlomo Sand. Perhaps this is because, at this moment, illogic serves his political purposes much better. And so, in Macron’s France apples become oranges. That is, anti-Zionism and anti-Semitism become the same.

Why is this illogical? It is so because anti-Semitism is directed against Jewish people no matter where they are found and based on nothing other than their religion/ethnicity. On the other hand, anti-Zionism is opposition to a specific political doctrine based on its racist nature and practice in the state of Israel. It is not just many French Arabs who understand this. Many French Jews themselves are anti-Zionist. At the same time, French anti-Semites, who probably dream of an exclusive French “communalist state,” want to see all French Jews pack up and move to Israel. This puts these anti-Semites on the same team as avid Zionists. 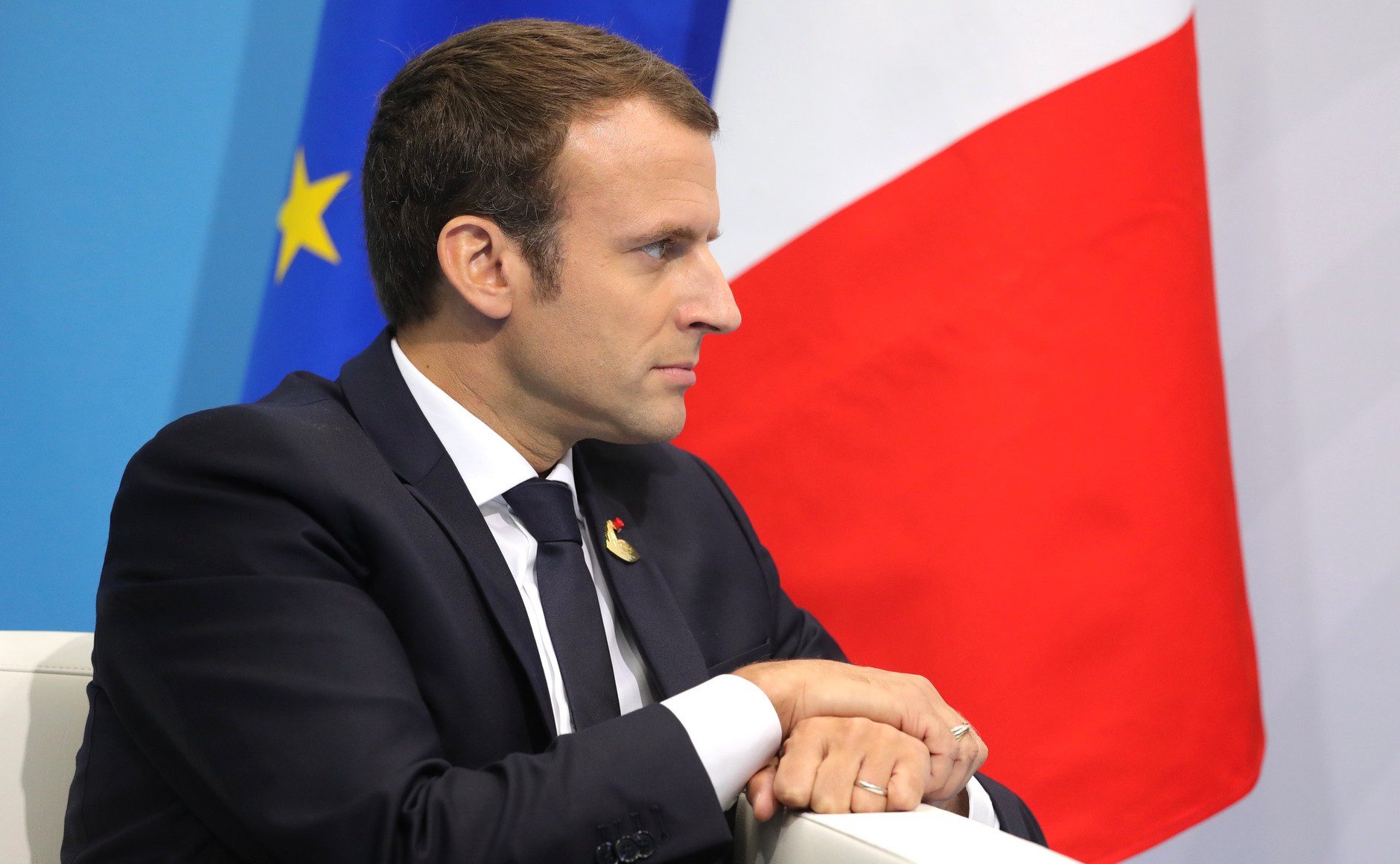 And what about the French Jews who are anti-Zionist? Macron is putting these Jewish citizens in a position where they can be legally accused of anti-Semitism. As French journalist Dominique Vidal described the situation to FRANCE 24: “if we consider opposition to Theodore Herzl’s theory as anti-Semitic, then we’re saying that the millions of Jews who do not wish to live in Palestine and the occupied territories are anti-Semites. … It’s historical illiteracy, or worse, stupidity.”

Macron is not stupid, but neither is he a principled democratic republican like Shlomo Sand. He knows that if, as his party spokesman now puts it, “denying the existence of Israel [that is, Israel as a Jewish state] … has to be made a criminal offense,” you are making it illegal to stand with the Palestinians and against the racist nature inherent in a religious and ethnically exclusive state. Macron is using the law to silence popular opposition to Israel. Also, in this way the hostility of French Arabs to Zionist French Jews becomes criminal.

This is exactly the current Israeli strategy in response to having lost the public debate over the true nature of the Zionist project in Palestine—criminalize the arguments of your critics.

No French national leader would support such an anti-democratic strategy unless he or she is a political opportunist who is currying the favor of a politically powerful lobby. In the case of Emmanuel Macron, this is also a maneuver to label his opponents (perhaps France’s Muslims as well as all those protesting “yellow vests”) as anti-Semites.

It is this last fact that, in the long run, is most dangerous for French culture and politics. As we have seen, anti-Semitism is nothing new in France. It is embedded in a certain French self-image that is, in the end, reluctant to allow entry to anyone not deemed truly French, be they Muslims or Jews. Unless French leaders are willing to challenge this cultural puritanism, they will find anti-Semitism, and other forms of xenophobic passions, poisoning their national life for the indefinite future.

19 comments for “Anti-Semitism vs. Anti-Zionism in France”