If the objective was to further isolate the U.S., the two officials could not have done a better job last week, writes Patrick Lawrence.

What a job Vice President Mike Pence and Secretary of State Mike Pompeo did in Europe last week. If the objective was to worsen an already critical trans–Atlantic rift and further isolate the U.S., they could not have returned to Washington with a better result.
We might have to mark down this foray as among the clumsiest and most abject foreign policy failures since President Donald Trump took office two years ago.

Pence and Pompeo both spoke last Thursday at a U.S.–sponsored gathering in Warsaw supposedly focused on “peace and security in the Middle East.” That turned out to be a euphemism for recruiting the 60–plus nations in attendance into an anti–Iran alliance.

“You can’t achieve peace and stability in the Middle East without confronting Iran,” Pompeo said flatly. The only delegates this idea pleased were Benjamin Netanyahu, the Israeli prime minister, and officials from Gulf Arab nations who share an obsession with subverting the Islamic Republic. 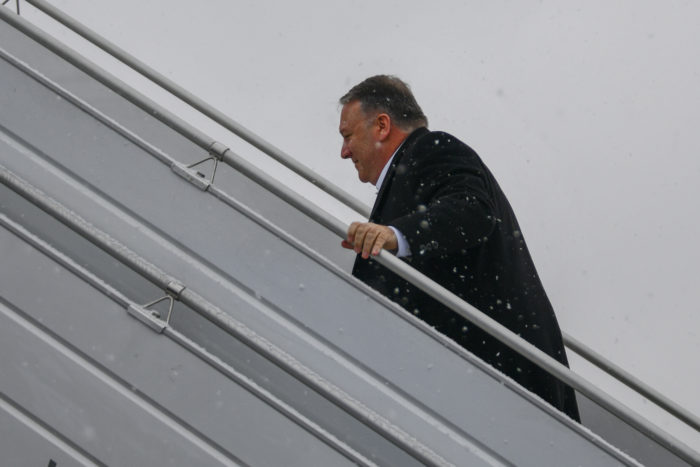 Pence went on to the annual security conference in Munich, where he elaborated further on a few of the Trump administration’s favored themes. Among them: The Europeans should ditch the nuclear accord with Iran, the Europeans should cut off trade with Russia, the Europeans should keep components made by Huawei and other Chinese companies out of their communications networks. The Europeans, in short, should recognize America’s global dominance and do as it does; as if it were still, say, 1954.

It is hard to imagine how an American administration can prove time and again so out of step with 21stcentury realities. How could a vice-president and a secretary of state expect to sell such messages to nations plainly opposed to them?

Pompeo, who started an “Iran Action Group” after the Trump administration withdrew last year from the 2015 nuclear accord, returned repeatedly to a single theme in his Warsaw presentations. The Iranians, he said, “are a malign influence in Lebanon, in Yemen, and Syria and Iraq. The three H’s—Houthis, Hamas, and Hezbollah—these are real threats.”

Pence ran a mile with this thought. “At the outset of this historic conference,” he said, “leaders from across the region agreed that the greatest threat to peace and security in the Middle East is the Islamic Republic of Iran.” To be noted: all the “leaders from across the region” in attendance were Sunnis, except for Netanyahu. The major European allies, still furious that Washington has withdrawn from the nuclear accord, sent low-level officials and made no speeches.

The European signatories to the Iran accord knew what was coming, surely. While Pence insisted that Britain, France and Germany withdraw from the nuclear pact—“the time has come,” he said—he also criticized the financing mechanism the three set up last month to circumvent the Trump administration’s trade sanctions against Iran. “They call this scheme a ‘special purpose vehicle,’ ” Pence said. “We call it an effort to break American sanctions against Iran’s murderous revolutionary regime.”

There were plenty of European leaders at the security conference last weekend in Munich, where Pence used the occasion  to consolidate what is beginning to look like an irreparable escalation of trans–Atlantic alienation. After renewing his attack on the Iran agreement’s European signatories, he shifted criticism to the Nord Stream 2 gas pipeline.

Now under construction, this will be the second undersea pipeline connecting Gazprom, the Russian energy company, to Germany and other European markets. Last month the U.S. renewed threats to sanction German companies working on the $11 billion project. “We cannot strengthen the West by becoming dependent on the East,” Pence said at the security conference Saturday.

These and other remarks in Munich were enough to get Angela Merkel out of her chair to deliver an unusually impassioned speech in defense of the nuclear accord, multilateral cooperation and Europe’s extensive economic relations with Russia. “Geo-strategically,” the German chancellor asserted, “Europe can’t have an interest in cutting off all relations with Russia.” 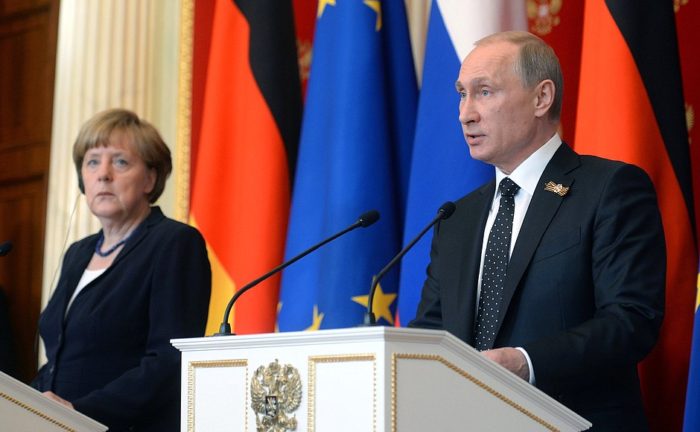 Angela Merkel and Vladimir Putin in Moscow, 2015. (The President of Russia)

Merkel’s speech goes to the core of what was most fundamentally at issue as Pompeo and Pence blundered through Europe last week. There are three questions to consider.

The most obvious of these is Washington’s continued insistence on U.S. primacy in the face of full-frontal resistance even from longstanding allies. “Since day one, President Trump has restored American leadership on the world stage,” Pence declared in Warsaw. And in Munich: “America is stronger than ever before and America is leading on the world stage once again.”

His speeches in both cities are filled with hollow assertions such as these—each one underscoring precisely the opposite point: America is fated to continue isolating itself, a little at a time, so long as its leaders remain lost in such clouds of nostalgia.

The other two questions concern Europe and its future. Depending on how these are resolved, a more distant trans–Atlantic alliance will prove inevitable.

First, Europe must soon come to terms with its position on the western flank of the Euro–Asian landmass. Merkel was right: The European powers cannot realistically pretend that an ever-deepening interdependence with Russia is a choice. There is no choice. China’s Belt and Road Initiative, as it progresses westward, will make this clearer still.

Second, Europe must develop working accommodations with its periphery, meaning the Middle East and North Africa, for the sake of long-term stability in its neighborhood. The mass migrations from Syria, Libya and elsewhere have made this evident in the most tragic fashion possible. It is to Germany’s and France’s credit that they are now negotiating with Turkey and Russia to develop reconstruction plans for Syria that include a comprehensive political settlement.

As they do so, Washington shows no sign of lifting sanctions against Syria that have been in place for more than eight years. It may, indeed, impose new sanctions on companies participating in reconstruction projects. In effect, this could criminalize Syria’s reconstruction—making the nation another case wherein Europe and the U.S. find themselves at cross purposes.

Patrick Lawrence, a correspondent abroad for many years, chiefly for the International Herald Tribune, is a columnist, essayist, author, and lecturer. His most recent book is “Time No Longer: Americans After the American Century” (Yale). Follow him @thefloutist. His web site is www.patricklawrence.us.

Support his work via www.patreon.com/thefloutist.

64 comments for “PATRICK LAWRENCE: Pompeo, Pence & the Alienation of Europe”